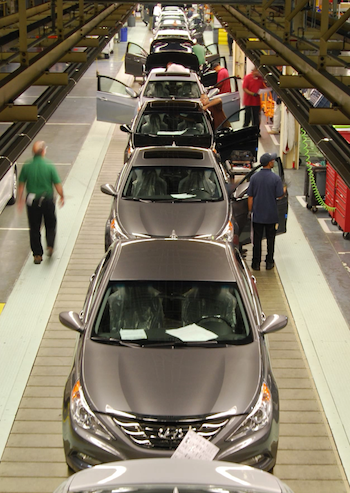 Gareth Price visits Hyundai’s major manufacturing facility in Montgomery, Alabama, as it welcomes the return of an SUV to its production lines

Back in 2005, Hyundai’s plans to open its first US manufacturing facility came to fruition and the $1.7 billion automotive assembly and manufacturing plant in Montgomery, Alabama, was up and running.

Operated by Hyundai Motor Manufacturing Alabama (HMMA), the site footprint was planned around annual capacities of 300,000, based on standard two-shift operations and a 40-hour work week. However, as manufacturing ramped up through the years, the HMMA is now capable of producing up to 399,500 vehicles per year at full capacity.

Vice president of production operations Chris Sussock says the team was able to achieve that volume relatively quickly: “The demand for sedans had increased back in 2009/2010. Around that time, up through maybe 2015, we started to figure out how we could maybe get some capacity into the plant. We did that, not necessarily by a lot of tool modifications, even though we had to do some of that in order to maintain an incremental increase of line rate, but we primarily put a third shift on in 2012, and so were able to elevate our overall capacity to about 120%/125%.”

Volumes at the facility were touching 400,000 between 2012 and 2016, Sussock adds, but as more recent trends have seen sedan sales “soften” a little bit, capacity has dropped. “It is still above the intended design capacity of 300,000”, Sussock confirms.

The power of threeAn extra lever in managing customer trends is the return of a Santa Fe to HMMA’s assembly lines. The model was first built at Alabama over 10 years ago but was transferred away only to return in 2016. It meant Sussock and the team had models, and three platforms, to process. The challenge, he says, was two-fold: “We launched the fifth generation Santa Fe – the CM Santa Fe – back in 2007. Because of the demand for sedans back then [2011], we moved the Santa Fe out to our sister plant, Kia in West Point, Georgia. They were just starting to ramp up and had the excess capacity to take on the Santa Fe at that point in time. We were just strictly building sedans out of this plant.”

When the market shifted in 2016, the Santa Fe came back to Alabama for its sixth generation, the AN Santa Fe. Sussock explains, it took some modifications in the weld shop, but at a relatively low cost, there wasn’t much required in terms of new tooling or automation into the system. With a few adjustments, including only minimal ones needed in final assembly, HMMA was able to move the Santa Fe vehicle back within a 10-month period.

This summer, preparations for the seventh generation Santa Fe, a new launch, were in full effect. Sussock confirms that HMMA is once again the exclusive source for the Santa Fe: “We’ll probably run a higher mix ratio of more SUVs compared to sedans and share them with the other two platforms, and we expect to have our capacity levels start climbing back up, moving into 2019, 2020, and beyond.”

Sussock is well placed to review the progress and the challenges of HMMA having completed more than 14 years’ service there. Previously based in Detroit, he first made the move south to Alabama to join Hyundai as a senior manager before becoming head of department for the quality control.

“Through the course of time, I was promoted to director of quality operations, so my responsibility was quality for the entire manufacturing operation here in North America. Everything from beginning of stamping, supply chain, all the way up to finished vehicles and distribution. I was also responsible for customer satisfaction and customer feedback and improvements,” he explains. He was promoted in 2015 and appointed as vice president for production operations: “Then my responsibility kind of shifted and now I’m responsible for just about everything!”

Scoring the home runIn managing the transitions, for the weld shop at least, Sussock reflects that the evolution required approaches that swung back and forth. “We put some more automation into the system, but we took some automation out. I’m an avid believer that a good balance of automation and labour workforce is that you’ve got to find what you really need, because you can go too heavy on each side of the spectrum,” he explains.

Over the past few years, making the changes to the platforms and preparing new model launches, HMMA has identified time periods to explore improvements. A significant example involved an automated door-hinge and door-hanging process.

“I think that was a ‘home run’ in the weld shop,” Sussock declares, “For our quality capability, it really narrows down our structural dimensional control for door fit, gaps and flush, everything that goes along with the structural integrity of that system for moving parts.”

On the other side of the coin, Sussock says that the automated system of rack feeders in weld shop was removed in favour of a strictly manual line feed system. He explains: “Material would come in, be unloaded, go through automatic rack feeders that actually fed back into our subsystem lines. Over time, we found it inefficient and quite cumbersome to maintain and so we took that out. We increased the head count to do that, but its more efficient than what we were experiencing with that system.”

While automation has huge benefits it is entirely reliant on a consistent environment, which isn’t always possible. There’s still a role for the judgement calls and human intervention. Sussock cites the situation at Tesla and Elon Musk’s admission that Tesla plant productivity rates were not meeting expectations: “Musk made a comment that maybe they’d put in too much automation. And I thought about that comment. It’s a possibility. I don’t know exactly what he has in that plant or what their intent for process capability was, but my suspicion is that that’s probably not a fully accurate statement. It’s just my opinion, but I am sure you could make modifications to make it work to the advantage of what he’s trying to achieve. But I think they’re under the gun, so they decided to say, hey, throw some head count into it and see if we can do it manually.”

Expanding the rosterMaintenance is a field less reliant on automation and human qualities such as knowledge, experience, judgement and skill prevail. The challenge for OEMs, as HMMA’s human resource director Robert Burns explains, is recruiting the staff. So the company is coordinating efforts with Alabama’s education bodies to address the skills gap.

He says: “Maintaining robots, maintaining conveyor lines, lifters and electrical panels and all that, getting the manpower for that has really been a challenge. And fortunately, the state’s community colleges, which are the technical schools, have been stepping up. We’ve been working real close with them to try to get that pipeline of people who want to be in that kind of a job.” Burns adds that it can be a very well remunerated role but there’s competition for those types of skilled employees across the region with several OEMs and suppliers based there. For example, Honda, Mercedes-Benz and Toyota have vehicle or powertrain plants in the state. A new Toyota-Mazda joint venture opens in 2021. 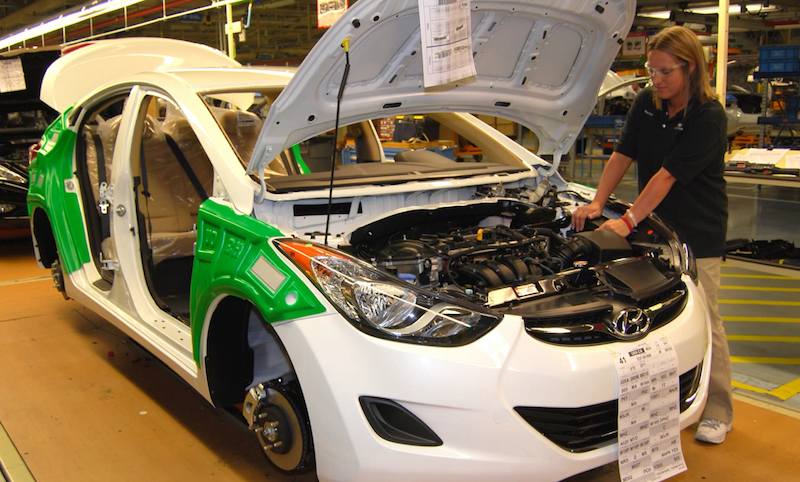 From its beginnings, HMMA was set up for big operations and is now, at full capacity, capable of 399,500 vehicles pa

“There is an aerospace industry down in Mobile, Alabama with Airbus. As industries have come to Alabama, some people have moved into the area to take those jobs. We have had some success attracting workers from other parts of the state of Alabama and other states. But we’re playing a little bit of catch-up. Everybody is. It’s not just us – even Mercedes. And Mercedes has their training programmes like we have our programme. It just happens to be a different technical school that they’re working through. We’re working through Trenholm and they’re working through Shelton State Community College. And then Honda has a group called Gadsden Community College. That’s their pipeline.”

Starting at the high school level, getting students interested in doing the job, HMMA has had some success with recruiting programmes and summer internships, some of which led into full-time jobs.

“We try to encourage young people to consider the automotive industry. It’s cool to work in the automotive environment. Sure, you’re still turning a wrench but you’re contributing to build the car in your own way. We are trying to tap into individuals who want to not only program a robot but to also repair the robot. So, it has become a numbers game for us.”

The modern reality is that students considering career paths will be contemplating the fast-changing digital world as much as, if not more than, what they might see as commonplace trades.

Burns says, “We are looking for an individual with a combination of skills. The maintenance team member should be able to troubleshoot a conveyor system and things like that. Having some degree of basic electrical and mechanical skills is important, so when they are working on an electrical panel they have a basic understanding how to troubleshoot a problem. Or if they need do a little bit of spot welding or understand a little bit about piping, they can handle that. We want team members who have multiple skills but they don’t have to be an expert. We want them to be an expert, in the long run, on-the-job-training wise, to program robots or controllers for conveyor systems and things like that.”

Up for the challengeFrom its beginnings, HMMA was set up for big operations. The confident understanding was that manufacturing Hyundai vehicles here in the United States was going to be a success. Nevertheless, the scale of output at this Alabama plant hasn’t encumbered the level of versatility shown; a quality that’s been called upon in the past, the present and will certainly be required again as the market continues to dictate change.

“We’ve been able to demonstrate flexibility over the last 12-14 years. We can launch a new model, a next generation vehicle, within less than 18 months. We can transfer one model into the plant within less than a year without really missing a beat,” Sussock declares. “Now, looking forward, do we take the plant, originally intended for a sedan, and convert to a crossover SUV plant. How quickly can we do that? Well, we’ve been doing just that, and turning around relatively quickly, just based on the basic premise of how this plant was structured and designed. We have the capability.” 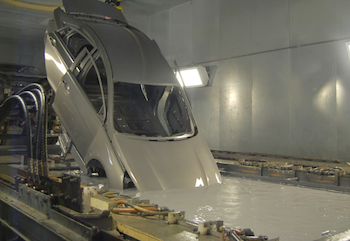 In the paintshop, each vehicle body is cleaned before a zinc-phosphate coating applied

StampingHMMA’s stamping shop comprise two presses, delivering a combined force of 5,400 tons of pressure. An electro-monorails flow of steel material from stamping into the welding shop. There 283 robots in the weld and seal car parts using a 100% automated process.

PaintIn the paintshop, each vehicle body is cleaned before a zinc-phosphate coating applied. The body is submerged in a cathode dip bath for corrosion resistance, then rotated 360 degrees through each tank (there are ten full rotations) to eliminate air bubbles in body cavities. The vehicle is primed, and then painted with a topcoat and clear coat – 100% of the actual paint application is automated and the primer and base coat colours are water-based.

General assemblyVehicles pass along more than 7,000ft (2130m) of state-of-the-art conveyors, adjusted to the height of each individual team member. The final evaluation area includes a roll test, a high-pressure water test booth and a 2.3 mile (3,7km) test track with a variety of road surfaces.