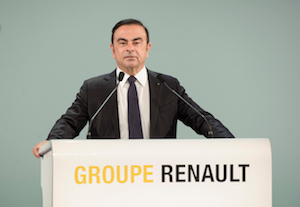 Having driven the change, Renault is now driving into the future – according to its new strategic strapline. Just a few days after Ford announced its latest corporate strategy under new CEO Jim Hackett, Renault’s long-standing leader, Carlos Ghosn, announced its own strategic plan. According to the CEO, Renault had successfully completed the previous plan (Drive the Change) and needed a new one; Drive the Future, which runs through to 2022, is not so much revolutionary as evolutionary.

The new plan will focus on: extending the use of shared platforms (80% of sales to be made on different iterations of the Common Module Family by 2022); refining the platform to produce a high and a basic specification of each version; extending part standardisation (all non-visible parts to be shared by 2019, saving 20% on purchasing costs); doubling R&D synergies across the Alliance; improving vehicle assembly efficiency by 50% and powertrain assembly efficiency by 20%; investing €400m ($471.8m) in equipment to move Renault to Industry 4.0 standards; and achieving a €500m saving through digital transformation of business processes.

As if this were not enough, the new strategy includes a 20% increase in battery electric vehicle offerings, a 50% increase in other EVs and a 50% decrease in diesels; plus, there will be autonomous vehicles, connected vehicles, a wider range of models offered in emerging markets and multiple improvements to Group sales and marketing.

Drive the Future is a comprehensive roadmap for the company and difficult to distil. It is not, however, a brand-new strategy, and this is no bad thing. Constant changes of direction are not good for any organisation, especially one as large as Renault, with its complex set of alliances with Nissan, Mitsubishi and Daimler-Mercedes. Drive the Future represents a continuation of the strategy set out in Drive the Change (and earlier plans): extending commonality of parts and modules and improving core business processes. Ghosn and his co-directors clearly believe they are on the right path and the company’s performance in recent years suggests that they have the right approach.

As well as generating a positive cash flow from automotive operations annually, Renault is aiming for a wider geographic spread of profits. In 2016, Europe generated 75% of profits, but by 2022 the split is intended to be 50:50 between Europe and the rest of the world; the Americas (essentially Brazil and Argentina, with a small contribution from Mexico) are the target of a three-fold increase in profits, while Eurasia (including Russia, where Renault and Nissan control AvtoVAZ) is tasked with a five-fold increase. Similar profit rises are expected in China, Africa and the Middle East.

And this is perhaps where the plan is most at risk; Renault has only just entered the Chinese market, the Russian market is far from guaranteed to grow and allow vehicle companies to generate profits, and the Latin American markets have done nothing but fluctuate widely in recent times. It is reasonable to expect Renault to do better in Europe and make more from its alliances in developed markets, but whether emerging markets can collectively double their share of Group profits is the element of the plan which is most open to debate.