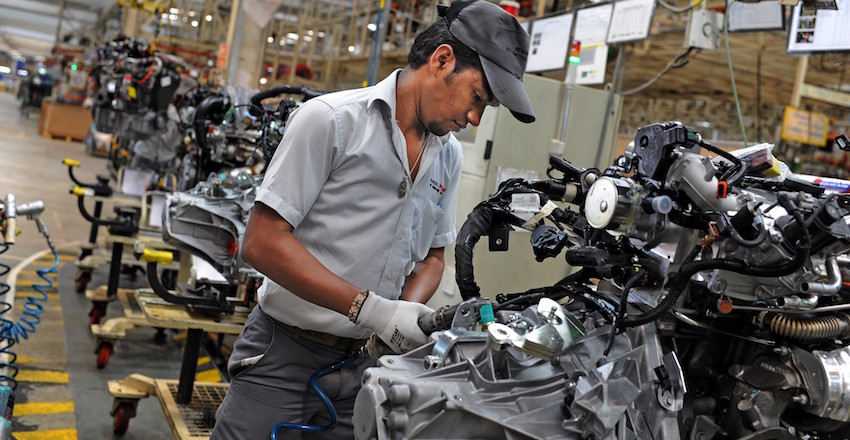 The list of OEMs that have tried and failed to make an impact with India’s value-conscious consumers is long, but 2017 marks the start of a comeback for two of the most famous of those: Volkswagen Group and PSA Group.

The average price paid for a car in India might be well below other major markets at 400,000-500,000 rupees ($5,880-$7,800) according to figures from analyst IHS Markit, but the attraction for automakers lies in the potential for growth. Last year, light vehicle sales reached 3.4m, of which 3m were cars (a rise of 7% for cars on the year before). This year will see growth of around 5-6% according to predictions from IHS Markit, rising to around 5.7-6m light vehicles by 2020. That would be enough to propel India ahead of Japan to take third place behind China and the US in the global light-vehicle charts. Renault has said it believes the market could reach between 8-10m cars by 2025. 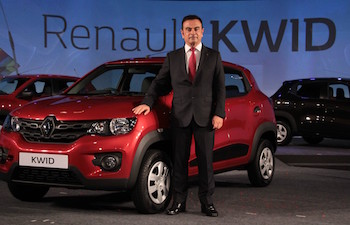 Renault shows the wayTogether Maruti Suzuki and second-placed Hyundai account for around two thirds of the car market in India, but the recent success of Renault has shown that with the right car, the right platform and the right production strategy behind it, India can bring rewards for other makers too. Last year Renault sales grew a whopping 148% to 132,235 and propelled the French OEM to eighth in the rankings with a 4.5% market share, according to figures collated by Bestsellingcarsblog.com. The success was largely because of the success of the Kwid, an SUV-styled city car built on the firm’s CMF-A emerging markets platform that was largely developed in India and shared with Nissan’s Datsun brand.

This progress didn’t come easy, as chairman of the Renault Nissan Alliance, Carlos Ghosn, told journalists at the Geneva motor show in March. “The success of Renault today followed many failures,” he admitted, citing Renault’s ill-fated hook-up with Mahindra that ended in 2010. Renault still went ahead with the construction of its plant in Chennai, Tamil Nadu state, but localising the low-cost B0 platform that proved such a hit in emerging countries elsewhere with rebranded Dacia products still didn’t work. “B0 wasn’t cheap for India,” Arnaud Deboeuf, senior vice-president for the Renault-Nissan Alliance, told AMS at the Geneva show. The success only came once the firm had developed a dedicated India-only platform used initially for both the Kwid and Datsun RediGO.

With a claimed 97% localisation rate, the numbers finally started adding up. “From the beginning we decided to do two cars with 65% of common parts – one platform with one engine and one gearbox. Then we have a volume effect,” Deboeuf said. The cars and their engine are both made in Chennai on the same line, and last year their combined sales reached over 125,000.

Renault’s plan now is to expand the models on the platform, in much the same way Dacia (badged Renaults in emerging markets) has built a whole range on the B0 platform. “With Dacia we go from small hatchback to a larger 4x4 to an even larger MPV. We will do the same with the CMF-A. We will have a lot of different cars,” Deboeuf said. Renault’s next target with the Kwid is Brazil.

Ghosn took a swipe at those car firms who quit markets like India. “Nobody in a new market is successful the first time. Nobody. So we need to be patient,” he said. “That’s why I’m amazed to see carmakers getting out of some important markets. If you are not ready to accept failures and learn from them and then try again many times, it’s best not to go there. Especially in India, which is a complicated, competitive market.” 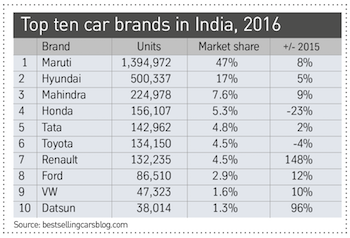 PSA returns to IndiaOne maker promising to return again after two false starts is PSA Group, which in January announced it had signed an agreement with Indian industrial group CK Birla, owner of Hindustan Motors, to build cars and powertrains in India from 2020. PSA was one of the first foreign makers to enter India back in the 1990s but left in 1997 following losses rising from factory disputes surrounding local production of the Peugeot 309 hatchback. It announced a return in 2011 with the construction of a 170,000-capacity factory in Gujarat state, but abandoned plans the following year as it dealt with financial problems at home.

Also this year, PSA bought the Ambassador name badge from CK Birla, raising the possibility that it will produce a successor to the car that became arguably India’s most famous vehicle by dint of its impressively long production run from 1957 until 2014. PSA won’t rush in this time, with initial production of around 10,000-15,000 at Hindustan Motors’ Chennai factory.

Volkswagen tries againAnother European giant not put off by previous disappointments is Volkswagen, which in March signaled it once again wants to target the core value market in India following the acrimonious break-up of its partnership with Suzuki, inked in 2009 to help it gain better access to the country. Last year VW was the ninth biggest brand in India with sales of just 47,323.

Like PSA, VW is choosing to link up with a local maker, this time Tata Motors, which announced in March that it would work with VW’s budget Skoda brand to “develop vehicle concepts in the economy segment” with the first Tata-branded cars appearing in 2019. No decisions about production locations have been made, but VW has a production site in Chakan, Pune.

"Nobody in a new market is successful the first time... If you are not ready to accept failures and learn from them and then try again many times, it’s best not to go there. Especially in India, which is a complicated, competitive market" - Carlos Ghosn, Renault Nissan

It has been reported that the cars could be based on Tata’s new Advanced Modular Platform (AMP) after it was given a positive report by Germany engineering firm EDAG on VW’s request. Tata is predicted to develop powertrains while VW is expected to supply electrical systems. “I think they will share the platform, but the quality standards of VW is very high. Tata needs to clear that standard,” says Gaurav Vangaal, senior automotive forecasting analyst for IHS Markit in India.

Tata Motors has managed to turn around the fortunes of its loss-making passenger car division in India after years of lagging on quality. The maker was fifth in the passenger vehicle brand charts last year with sales of 142,962, up 2% on the year before, but the brand’s sales in the fourth quarter of the 2016 calendar year rocketed by 25% following the successful launch of the Tiago small hatchback. The car, initially called Zica but renamed following the Zika virus outbreak, has been widely praised by the local media for lifting quality compared to the current Bolt, Zest and ill-fated Nano small cars. Just 10,468 of the Nano were bought last year, down 54% on the year before, prompting speculation among Indian media that the groundbreaking mini city car will be cancelled this year.

Just as the European vehicle-makers are advancing in India, General Motors is reducing its Indian presence in response to low demand for its Chevrolet brand. Back in March it announced that its Halol plant in Gujarat, north-west India, would close at the end of April. GM has been in talks to sell the plant to its Chinese partner SAIC, which IHS’s Vangaal expects to use it as a springboard to its own market entry using its MG brand. However, IHS Markit’s Gaurav Vangaal believes that would require developing a new car for India. “They don’t have vehicle that will work,” he says.

GM has been wracked by the same problem that has afflicted other automakers: if you want to challenge the might of Maruti Suzuki (which managed to take over 50% of the passenger car market in January, following successful recent new model launches) you need a car developed in India for India. GM’s Chevrolet brand saw its India sales plummet by 20% last year to just 28,949.

However unlike in Europe, Russia and Indonesia, GM will retain a manufacturing base in India with its 170,000-capacity Talegaon plant near Pune. There it makes smaller cars like the Spark, Beat and Sail, and is about to start production of a new Beat for export markets such as Latin America.

Dealing with spare capacityExports are also key to Ford’s continued survival in India, even though its market share was only 2.9% last year with sales of 86,510, led by the EcoSport small SUV, which accounted for more than half. Ford opened a $1 billion plant in 2015 in Sanand, Gujarat state, to make the Figo/Ka+ small supermini, which it also exports to Europe. Ford also has a plant in Chennai where it builds the EcoSport for local sale and export to a variety of global markets, including most recently North America.

However, the OEM is estimated to have spare capacity of around 180,000 in both plants, and local media has recently reported that the OEM is looking to offer its Chennai capacity to local maker Mahindra, India’s third biggest selling passenger vehicle brand last year. Chinese maker Changan is also reportedly interested.

Honda is another brand struggling with overcapacity at its two Indian plants. It was reported in March that local production for the Japanese brand is under by about 100,000 units due to falling demand. Honda was India’s fourth-biggest selling brand for passenger vehicles, but sales fell a painful 23% last year.

Those who are doing well, however, are adding more capacity. Hyundai, India’s second biggest brand with sales up 17% last year at just over half a million, is expected to shortly announce a second plant to be built in southern India by 2019.

In March, Maruti-Suzuki opened a new plant in Gujarat, its third in India, to relieve capacity constraints, despite its current two plants having a capacity of 1.5m. The third plant adds another 250,000 units of capacity but is slightly different in that the company’s parent, Suzuki Motor Corporation, instead of Maruti-Suzuki, in which Suzuki has a 56% controlling stake, runs it. India was Suzuki’s biggest global market in the nine months to the end of December last year, overtaking Japan. 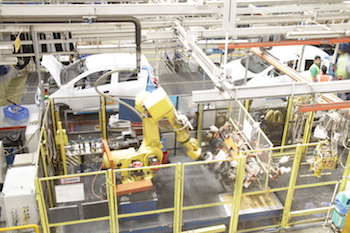 GM has concentrated all its Indian production at the Talegaon plant

Regulations changing the marketIndia is a challenging car market for carmakers because it is almost unique globally. Cars need to be almost unfeasibly cheap, which means making them small and relatively simple. But that could change as new crash and emissions regulations come into force. The country has moved to Bharat Stage 4 (BS4) emissions regulations from April 1st, roughly equivalent to Euro 4, but will jump to BS6 in 2020 with no Stage 5. That will likely kill the tiny diesels currently popular among small cars here (but almost nowhere else). In the last quarter of 2016, diesel share in passenger cars fell from 44% the year before to 40%.

The new regulations won’t be cheap. “Costs will go up for every manufacturer and they are going to pass it along to the consumer,” IHS’s Vangaal says, adding that the tougher regulations will be good for exports: “India will be producing vehicles with global standards. That gives us a big opportunity.”

Metal parts supplier Gestamp is already noticing a shift towards quality in India. It opened its first plant to produce pricier but weight-saving hot-stamped high-strength steel parts in Pune back in February. “I never expected to have a hot-stamping plant in India, but it’s fully booked,” Francisco Riberas, Gestamp Chairman and CEO told AMS earlier this year. Customers include Tata as well as Fiat-Chrysler, which will export the new Jeep Compass from its Ranjangaon, Pune, plant.