As production grows rapidly in India, enterprising suppliers have come up with imaginative solutions to finishing system challenges

India is one of the most exciting areas of automotive production in the world, with domestic and transplant OEMs taking advantage of the rapidly growing wealth of consumers, offering low-cost four-wheelers to encourage a shift from motorcycle, scooter and three-wheeler transport. This growth, combined with almost unlimited Greenfield site space, has brought tremendous opportunities for facilities and service providers, both home-grown and from overseas. A company with a great combination of Japanese expertise and the Indian spirit of innovation is paintshop vendor Tai- Kisha.

Tata Motors Uttranchal is among one of the Asia’s largest paintshops with every a body being produced every 1.05 mins.

Taikisha has closely worked with client Tata Motors and the paintshop was installed on a total turn key basis, including all primary utilities. The facility is highly advanced with a fully robotic line including underbody robots and topcoat painting robots. The plant has a lean painting line featuring a three-coat plus one bake system.

The paint booth has auto-retractable grating which folds away while the robots are painting resulting in no excess paint deposition. During maintenance the grating is rolled back into the booth.

Material handling in this plant is handled by a Taiki-sha special conveyor system; part of this is a friction rail conveyor which is noiseless thanks to using no chains and has very low power consumption as it is a localized system that only starts after it has detected the presence of a body. 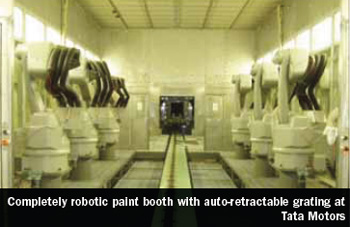 In 2000, Taikisha executed a particularly challenging project for Maruti Udyog Ltd, for their Gurgaon plant 1, where the complete facility was scrapped and rebuilt. The project was executed in three phases and was very demanding as part of the plant was still running production. Large sections of the process system had to be dismantled and replaced without disrupting existing lines. This required some very detailed project management and, with the support of the client the project was completed on time without any accidents.

In 2002, Taikisha carried out an interesting project for Honda Motorcycle and Scooter India, at its frame and sheet metal line paintshop. In this project complete pretreatment, electrodeposition, painting booths and baking ovens are all automated by floor conveyor. This conveyor was specially developed to enable the complete hanger and body assembly to rotate 180deg vertically to facilitate dipping and coverage inside the fuel tanks and other semi-enclosed components. This line also enabled the shortening of the process line as dip entry and exit slope ramps were not required, decreasing the overall footprint of the line.

The company was established in 1913 and was originally known as Kenzaisha. It produced engineering solutions for air, temperature and water control for clean room, air conditioning and ventilation system applications.

Taikisha Ltd. Japan has a global presence, with full design and engineering offi ces in Tokyo, Osaka, Nagoya, an R&D centre in Hirakata and robotic assembly and trial at Zama, Japan.

In 1983-’84, when Maruti Suzuki was setup at Gurgaon, Haryana, Taikisha Japan brought revolutionary new metal finishing technology to India with the introduction of CED technology for cars, resulting in much improved paint finish and long coating life, while drastically reducing sheet metal thickness - and improving fuel mileage, which was previously very poor. Taikisha Engineering India Ltd (TEIL) has been operating successfully for more than 14 years, catering to various Japanese and non-Japanese customers. Confi dence in the quality of the technology has led to plants being set up all over India.

Currently Taikisha India has about 240 employees, with project engineering and head offices in Gurgaon, a registered offi ce in New Delhi, plus sales and execution offices in Mumbai, Pune and Bangalore.

Situated in Zama, Japan, Taikisha has a robotic centre where a compete trial painting line is set up and client specific car body models can be tried for spray trials; the centre also has a complete assembly line where all the robots are installed and a client production line can be simulated. After all these checks and trials, the robots are dismantled and shipped to the client plant for final installation. This cuts down trial times and thus the clients final painting trials require much less time. It is also planned to install a robotic center at the TEIL Pune factory in India, so that in the near future clients will not have to ship their car body models to Japan, and all the new models of every client can be easily tested and tried in India, saving even more time.

Taiki-sha’s expertise is not confined to automotive; in 2007 to 2008, the company installed a coach painting plant for Indian Railways in Chennai. This was a very successful project and, following the installation of an automated version of the classic reciprocator system, coaches are being painted at much faster rate, with better quality and a much improved atmosphere for its employees’ health and safety.