Paintshop cleanliness is a vital aspect of the coating application process. Mike Farish finds out what it takes to keep the paint finish blemish-free 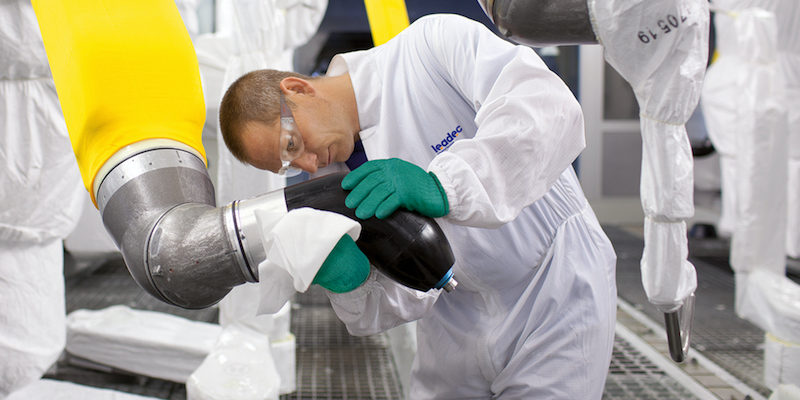 There is arguably no industrial manufacturing environment in which pristine cleanliness is more important than an automotive paintshop. The slightest speck of dust or any other contaminant can very easily compromise the quality of the paint finish on a vehicle to the extent that remedial action will be required. So keeping paintshops clean is not an incidental task. It requires a focused intensive methodology that is accurately described as “technical cleaning”.

That term is used by Michael Howey, contracts manager in the UK for Leadec, which supplies such services. He is responsible for two automotive-related technical cleaning contracts – one for a vehicle-maker and one for a tier-one supplier. “We look after all the technical cleaning operations for the clients in any area that is deemed to be production-critical, such as the spray booths and ovens,” he confirms. On a worldwide basis the company has around 100 such contracts in operation at the moment.

In itself that devolution of a paintshop’s cleaning by its operator to specialist external contractors is not unusual. Howey says that in his experience almost all automotive painting operations, certainly in the OEM sector, outsource the relevant responsibilities. But by implication, the fact that they do so underlines the highly specialised nature of what is involved. He confirms that impression by noting that the company’s services are “very data-driven and analytical”.

Standard practice would include the installation of air monitoring equipment to provide continuous updates on air quality. Parameters measured, Howey says, would include dust particles as small as five microns in diameter, as well as temperature and humidity. Specific measurements to identify particular data points are not all that is involved. They also provide the essential figures to enable monitoring of how and over what timescale a facility might deteriorate in use. “It allows us to target our work,” he explains.

But data, Howey suggests, is a supplement to knowledge. Simply knowing where and how to look at a facility to recognise and assess those aspects of it that are critical is a fundamental element in what the company brings to its operations. The two together can then support approaches that are proactive and preventative rather than just reactive and remedial.

One aspect of this is knowing where to position monitoring equipment to gather process data most effectively. As Howey explains, doing so requires more than a copybook approach and instead needs an understanding of the unique characteristics of individual paintshop installations. “We need to understand a facility, its airflows and the type of filtration it uses” he states. “In my experience every paintshop is very different from every other, even if they are all trying to achieve much the same objectives in terms of paint finish quality.”

But, as Howey also makes clear, monitoring and assessment are continuous processes. An example would be filtration requirements, where any malfunction needs to be addressed immediately and not retrospectively after what have been several hours of contaminant ingress into the affected area.

All that obviously requires people on-site. Howey promises that Leadec personnel would be present at all times with the number peaking during non-production periods when downtime allows for access to areas that would be impossible when operations were underway. Precise figures vary depending on the size and type of the facility.

Although, as with any industrial project, an appropriate timescale to implement all necessary procedures is obviously desirable a rapid, ‘firefighting’ implementation can be effected if necessary. Howey says that, in 2015, Leadec, which at the time was called Voith, was called in to what is now one of its tier one clients after that company’s then technical cleaning service provider abruptly resigned its contract. This meant the company had just ten days to get the paintshop up to full production capacity.

“We managed to mobilise and get senior people on the site on the same day,” he recalls. “Then we had to perfect the scope of supply; implement procedures to meet all legislative requirement, such as for health and safety, and working in confined spaces; and recruit staff.”

Howey adds that working in confined spaces is an important and perhaps under-appreciated aspect of the work involved. “It is a big deal for us because we do have to enter such spaces,” he says. Typically, such spaces might include the tanks immediately under a spray booth for the collection of overspray and sludge and also, perhaps surprisingly, the baths in which whole car bodies might be dipped.

“They can be classed as confined spaces,” he confirms. Entering the sludge collection spaces in particular, Howey says, can be potentially dangerous and requires both training and protective gear, including breathing apparatus.

The frequency with which such operations might be required, though, can be quite variable. At one of the company’s current clients, Howey indicates, they are carried out every week, but in practice several factors govern the situation. The key factors include, he says, “the system, the dosing and the chemical make-up of the product”.

What might be the dominant factor, though, is simply the design of the facility and the amount of space it provides for waste collection. In consequence, at the other extreme work of that sort might only be necessary “once a year”. That is the case at one of Leadec’s other clients where that annual clean-up task takes two weeks to complete.

As for the task itself, the use of water-based rather than solvent-based paints may not have a great influence on the frequency with which it is required but it does, Howey says, make the task appreciably easier. Moreover, Leadec has its own policy of avoiding the use of solvent-based cleaning materials. “We have put a lot of processes in place where we don’t need to use solvents,” he states.

Howey also stresses that solvent-free cleaning can be achieved even where solvent-based paints are used. “We look to drive down the use of VOCs (volatile organic compounds) and that is a big part of what we do,” he states. “We don’t use solvents at all at one OEM company where we work,” he states.

While not providing full details he indicates that a fundamental element of achieving this is to implement procedures that limit the amount of solvent-based paints that may become waste in the first place. “We put processes in place that protect the area,” he says, indicating that “protective coatings” on exposed surfaces that attract waste paint and which do not then require solvent-based cleaning are a key element of the technique.

For the future, one technique Leadec is currently introducing and which the company expects to be become standard practice, is being able to identify and deal with contaminants that are invisible to the naked eye.

“We are looking to introduce that technology right now,” he confirms. Though he declines to provide details other than to say it involves a technology that has been “bought-in and adapted” and which operates at a “micron-level,” Howey does indicate that the capability is a very recent addition to the resources Leadec brings to the job. “It is something we started implementing just eight months ago,” he states. “We have to keep pushing the boundaries.”