On the count of three 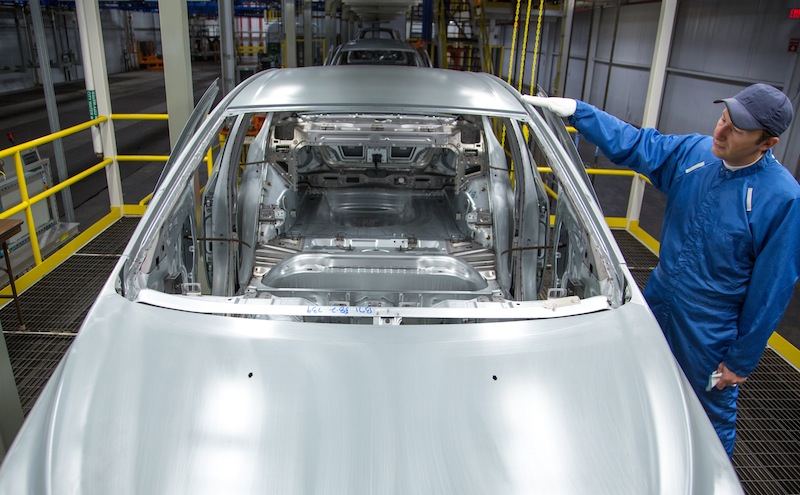 It is now four years since General Motors introduced a three-wet painting process to its portfolio of vehicle production technologies. The location in question was the Orion Assembly plant in Michigan and the vehicle was the Buick Verano. The essential part of the process from which the name originates is the application of three successive coats of material – primer, colour coat and clear coat – with the first and second layers still wet when the subsequent coats are applied.

In this system, the number of full oven-bake procedures is reduced because the need for any such procedure after primer application – as was once standard industry practice – is completely avoided. The most obvious and quantifiable benefit of the process is energy saving; instead of around 2.5MWh to paint a single vehicle, the figure for GM’s three-wet process is now only 1.0MWh. Nor is there any reduction in the quality of the paint finish. Quite the opposite; GM says the two-component clear coat offers superior resilience to external causes of degradation such as chip impact.

“Orion Assembly was the lead plant for the introduction of the three-wet process for GM in North America,” confirms Jeff Johnson, manager of process energy initiatives for GM. The process, he adds, was the result of joint development work, as is frequently the case, between the vehicle-maker and “several of the standard global painting system providers”.

The 2020 target
Johnson explains that GM is engaged in a company-wide “2020” initiative that aims to reduce energy consumption across the whole enterprise by 20% by the year 2020, using consumption in 2010 as a reference point. Hence the success of the Orion installation bears strategic significance for the company as a whole.

A paintshop worker checks the voltage while initiating first-layer application during an electro deposit process
Given their traditionally high energy usage, paintshops are an obvious target area; energy saving was as much a focus in the design of the installation at Orion as product quality. In fact, enabling the three-wet process and also a nano-zirconium pre-treatment procedure very much “drove” the whole design project, says Johnson. He says the performance levels it now achieves actually exceed the original objectives.

This is a consequence of what Johnson describes as a “detailed attack on the engineering quality and features” of the installation in all aspects of its specification, design and operation. As examples, he cites the accuracy of its pumping controls, the minimisation of oven exhaust-air volumes and “very high” air recirculation rates in the spraybooths themselves, sometimes as high as 90%. Other zones, he adds, make use of air that is “cascaded” from elsewhere in the paintshop. Though he does not provide a figure, he describes a “dramatic reduction” in demand for fresh process air compared with previous paintshop requirements within the company.

The process at Orion Assembly starts with the nano pre-treatment as opposed to a more conventional phosphating procedure, followed by a lead-free, completely immersive electro-dip process which in is then fully baked. The three-wet process itself comprises first the application of the waterborne basecoat – which Johnson terms a “basecoat-primer” – followed by an in-line flash heating process, then the waterborne colourcoat, again followed by in-line flash heating, and then clearcoat application, followed by a full bake. All paint processes are fully automated. “There is no manual spraying anywhere in the process,” confirms Johnson.

"There is no manual spraying anywhere in the [three-wet] process"
– Jeff Johnson, GM

No revisions required
Today, the process at Orion Assembly is largely the same as it was when it was first introduced; Johnson says the consistently high quality levels it has produced from day one mean there has been no need for any major revisions. Nevertheless, he adds, “like any paint process, you get better at it” and that some “minor adjustments” have been made. The bottom line is that GM is “very happy” with what the process has proven itself capable of delivering when measured against all key performance parameters, whether concerned with process efficiency or product quality.

GM’s confidence in the process is such that it is being introduced at a second factory in North America: the Fairfax plant in Kansas City, which produces the Chevrolet Malibu and Buick LaCrosse. The process at Fairfax is, confirms Johnson, largely the same as at Orion though he does note a couple of differences in terms of context; whereas Orion was a retrofit to an existing building, Fairfax is a completely new-build project on a greenfield site; also, the vehicles involved at Fairfax are bulkier than at Orion. The facility is currently described by GM as being in “successful ramp-up” with full production expected to commence in late 2015.

But Fairfax is not the first GM plant to follow in the footsteps of Orion Assembly in implementing the three-wet process, nor will it be the last. That much is confirmed by Rudy Pomper, senior manager of paint materials and facilities at GM. Pomper says that two other locations in China have already got the three-wet process up and running: Shanghai General Motors (SGM) Norsom in Shenyang, Liaoning province, in the north-east of the country, and SGM Wuhan, Hubei province, in the central region. The two plants represent the earliest and latest instances of GM’s involvement in the China, the former being a decade old and the latter having launched operations only last year.

Meanwhile, the third site in the US to implement the process is now in an advanced construction phase. This is the $600m upgrade project for the Flint Assembly plant in Michigan which got underway last year. A major part of the expenditure will go towards a completely new 596,000 sq.ft paintshop on land to the south of the main building. The first painting operations are scheduled for October 2016, and when they do start it is expected that general performance improvements compared with the previous facility will include a 90% reduction in sludge to landfill and reductions of 20% and 40% respectively in gas and electricity.

Pomper confirms that GM is very satisfied with the results the process is achieving, while being aware of the need to avoid complacency. “Although we’ve made minor refinements, the process has been quite robust and the shop runs at a very high first-time quality rate,” he states. “Nevertheless, GM continues to develop and improve all our processes and that includes even our new paint processes.”

By October 2016, the GM plants using the three-wet process will be: