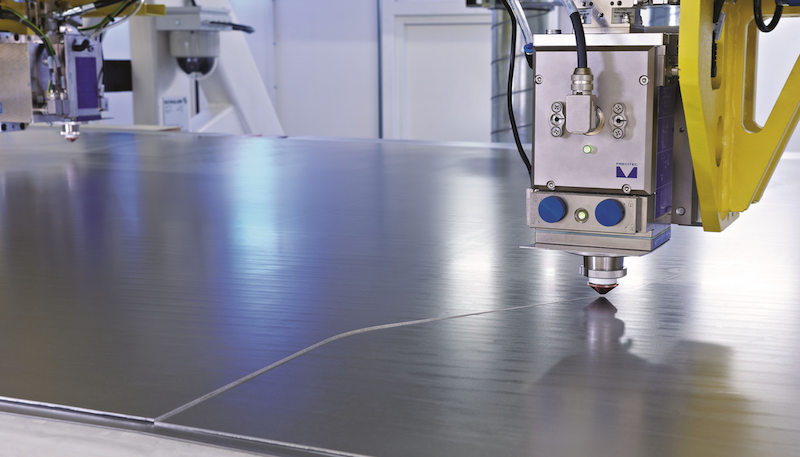 In itself, the term ‘blanking’ denotes something fairly straightforward and unexceptional – creating flat shapes out of sheet metal that may then be subjected to some further process such as bending. But companies wanting to carry out the process are nevertheless faced with an immediate decision about which of the available techniques are most likely to be best suited to their requirements. The three that present themselves are: pressing with an individual cutting die for each profile; cutting with mechanical shears; and cutting by means of a laser beam.

As Manuel Hunger, head of sales for technology supplier Schuler Automation, explains, the production of a 2D shape is the shared objective of each of those approaches, and choosing between them is a matter of balancing a number of factors, including intended production rates, material types and part geometries. He says that shears, for instance, are appropriate in “high-performance, high-volume” applications, adding that in relevant equipment they are also capable of cutting at an angle of “up to 35 degrees”, which is comparable with what can be achieved by oscillating dies.

Meanwhile, the capital cost and fixed geometry of each die used in pressing operations means that the main factor influencing their choice will be a demand for high-volume parts of unvarying geometries. As such, Hunger notes, press techniques for blank production – most likely using servo presses – are still the most frequently used technology in mainstream OEM environments.

Cost and volumeHunger observes that, typically, a press blanking operation in an automotive manufacturing context for parts such as doors, hoods and side panels might well be used to produce “as many as 40,000 parts in a 24-hour period”. But, he adds, he is aware of at least one operation within Schuler’s user base that can achieve 60,000 parts, albeit of a different type, over the same period.

One drawback is that, depending on the size and geometry of the part, the outlay for a die might be €50,000-€300,000 ($59,000-$94,000). Once a die is made, it is also difficult and costly to make anything more than very minor changes to it. While still fairly versatile, dies are subject to some limitations in the shapes they can economically produce; round edges, for instance, are much more costly that 90° angles.

The key difference in applicability between shearing and pressing is the blank shape, not the volume. Hunger explains that shearing is really only suitable for use where a blank has a straightforward shape. Anything more complex or irregular will almost certainly require the machining of an appropriate die.

The real advantage that shearing holds over pressing is that, for instances where a combination of a relatively simple shape and sufficient volume holds sway, the initial capital investment should be appreciably lower.

That leaves the third option: laser cutting, which is unsurprisingly the most modern of the three. In the case of Schuler, for example, Hunger says that the company first introduced the technology to the market as recently as 2011.At the most basic level the choice between laser blanking and either of its rival techniques is a matter of balancing the much higher production rates the latter can produce against the much greater flexibility of the former. As Hunger explains, a laser cutting installation handling a “typical automotive portfolio” might produce around 20,000 parts over the same 24-hour period in which a pressing counterpart might produce roughly double that figure.

But, as he also points out, there are counterbalancing factors that make the business case for laser blanking rather more complex than it might at first seem. For a start, a laser blanking line is much more flexible in that it does not have to be reconfigured in order to produce parts of different shapes, merely reprogrammed – something that facilitates not just the use of exactly the same hardware to produce entirely different parts, but also the ability to adjust the geometry of a particular part during production if necessary. “You can change the profile of a blank in a matter of minutes,” he states. In contrast, making even slight alterations to a machined die, while not impossible, will be costly and time-consuming.

Material considerationsAnother important factor is the continuing development of new materials. As Hunger explains, the advent of high-strength and ultra high-strength materials as part of the ongoing drive towards the lightweighting of vehicles is causing problems for both shears and blanking presses, and in particular for non-servo pressing techniques using dies. Quite simply, he says, these developments are “bringing existing equipment to a limit” and even “causing failures”.

What happens is that the impact forces such materials require, in order to form parts, cause what Hunger terms “reverse tonnage” – in other words, the transmission of unwelcome forces back into the press equipment, damaging it. He indicates that with existing types of such equipment the limits of mechanical cutting become more obvious when the tensile strength of the processed material reaches around 1,000 megapascals or more. Servo presses can certainly mitigate such effects though the capability for the speed at which they operate to be varied during individual strokes, thereby minimising percussive rebound effects.

“You can program the slide so that the actual impact is at slow speed and then speed it up again for the rest of the cycle,” notes Hunger. “But in contrast, if you slow down part of the motion in a conventional mechanical press then you have to slow down the complete cycle as well.” Meanwhile, he adds, though shearing could be used to tackle newer, higher strength materials the inhibiting factor would be excessive blade wear.

In the circumstances, Hunger indicates his belief that, in general terms, the future of blanking operations in the automotive manufacturing industry will increasingly involve users making a choice between servo press and laser-based technologies. Moreover, in the case of the latter technique, the hardness of the material involved is completely irrelevant. “A laser does not care about the tensile strength of the material,” he states.

Dies for DaimlerOne company that has faced up to making a choice between the continued use of heavy dies and the adoption of laser techniques, taking the latter course, is Daimler, which has commissioned two laser blanking lines using Schuler technology at its plant in Kuppenheim, south-west Germany. Moreover, given the comparatively slow speed identified by Hunger at which laser technology operates, the OEM has opted to install two laser blanking lines to satisfy its volume requirements.

But in light of the intrinsic flexibility of the technology, both the lines, which are meant for the serial production of compact vehicles, can be changed instantly to another cutting style at the touch of a button. The programming of the contours is carried off-line and can be simulated for production optimisation. But much more fundamentally, by dispensing with the dependence on heavy dies, Daimler believes that the pressing plant is now optimally prepared for all the projected different types of car models scheduled for the next few years. 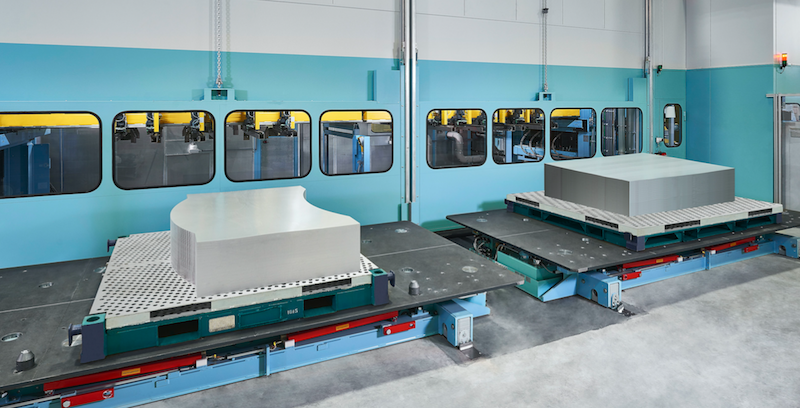 The key difference in applicability between shearing and pressing is the blank shape, not the volume

Working togetherIn each system, three laser heads work in tandem to cut contours at a speed of more than 100 metres/min from steel or aluminium sheet which is fed continuously and directly from the coil. This yields surface-sensitive, pre-cut components for mudguards, side parts, roofs and engine hoods. Part transport is carried out by a conveyor that moves through the system at a speed of up to 60 metres/min. The cut blanks are separated from scrap and stacked continuously. Subsequently, two press lines in the hall, also supplied by Schuler, form these pre-cut blanks into chassis parts, which are assembled in the adjacent Mercedes-Benz Rastatt factory.

The contrast with the non-laser alternative is stark. Normally, blanks are stamped using blanking dies that weigh upwards of 25 tons and cost up to €200,000 each before further outlays for storage, repair and maintenance are taken into account. Moreover, the introduction of a new vehicle or vehicle variant may well necessitate the refit of existing dies or the introduction of completely new ones. A final factor in Daimler’s decision to adopt this new technology was that the laser systems do not need expensive foundations or a basement, thus getting around the space limitations at the plant which might have impeded the installation of a die-based blanking system.