As GM splashes the cash across North America, AMS goes to see $583m worth of improvements to the OEM’s newest factory in the region – including a new bodyshop capable of mixed-material joining methods 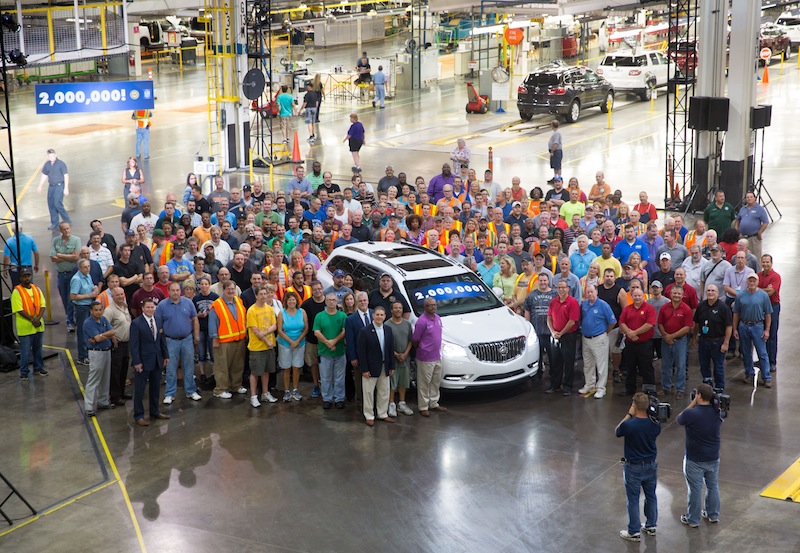 Lansing Delta Township (LDT) in Michigan is General Motors’ newest plant in North America, opened in 2006 just five years after the nearby Lansing Grand River (LGR) site. Nonetheless, LDT has secured a $583m share of the multi-billion dollar investments GM has made since its return to profitability in 2010 and is using these funds to complete a factory-wide upgrade. Nearly 263,000 sq.ft will be added to the existing 3.4m sq.ft of developed space on 1,100 acres, including a 191,594 sq.ft bodyshop, 28,500 sq.ft in the paintshop and an extra 28,142 sq.ft in general assembly. The expansion will enable the crossover specialist to add an as yet undisclosed model to its current production line-up of the Chrevolet Traverse, GMC Acadia and Buick Enclave – made largely for the US market – as well as boosting annual output from the present total of 275,000-300,000 units.

When AMS visited in July this year, work was well underway on the new bodyshop, with the exterior structure built at a cost of $63m and a $520m programme of equipment installation ready to begin. The additional area was separated from the existing operation by plastic sheeting, and GM Lansing regional plant manager Mike Trevorrow, who is responsible for both LDT and LGR, explained that the policy is to expand then ‘flip’ production over to the other side of the building, instead of completely shutting down and stripping out; the actual switchover will be accomplished inside two weeks. There is visible evidence today of when this previously occurred at LDT, during a mid-cycle enhancement for the Saturn Outlook; some of the disused equipment remains on the edge of the bodyshop for maintenance scavenging.

Trevorrow cannot disclose what the new vehicle at LDT will be, but suggests that it will feature “more mixed materials”, hinting at aluminium. Consequently, he says, “We’ll take advantage of newer technologies in regard to joining of materials.” This means that the bodyshop will branch out from resistance spot welding (RSW) to other methods such as flow-drill screws, rivets, adhesives and laser welding, although RSW will still predominate.

The CT6, at Detroit-Hamtramck, is produced using mixed materials. LDT will also make a new model using innovative joining methods
Under one roof
The existing bodyshop is already highly automated, housing over 500 Fanuc robots, but the new facility will benefit from next-generation versions that are “smaller, cheaper, faster and [can] lift the same weight”, says Trevorrow. The bodyshop handles some aluminium components – the bonnets for all three models, which are joined by epoxy adhesive and toggle locks (clinching) – but everything else is steel. There are dedicated cells for the different subassemblies, such as bonnets, closures and rockers. Around 4,000 welds are performed per vehicle and the bodies are built up by layering rather than a modular process. There is a co-ordinate measuring machine (CMM) room, plus visual inspection stations for checking quality.

The LDT bodyshop is supplied with stamped parts from press operations within the same hall, comprising two IHI and two Schuler presses. Trevorrow explains that, because it is a high-volume operation, the steel parts are press-hemmed rather than roller-hemmed – the newer technique which is used at LGR. The 2.5m sq.ft Grand River plant is GM’s second-newest in North America, established in 2001 on 111 acres, and operates one shift with a 1,292-strong workforce. It is due to benefit from a stamping facility that will launch in 2016, after receiving an investment of $174m that was announced in August 2014; onsite production of parts for the Cadillac ATS and CTS, plus the sixth-generation Chevy Camaro, will save $14m per year in material handling costs, the OEM estimates.

At LDT, the existing paintshop was off-limits during AMS’ tour, but Trevorrow says it features “the most modern technologies that we have” and is built on a cement pad which prevents the leakage of effluent into the environment. GM has stated that the upcoming expansion will enable improved application of sealers and coatings for better corrosion resistance.

“We want [line workers] to do it exactly the same, every shift, every time… I don’t need mavericks” – Mike Trevorrow, GM 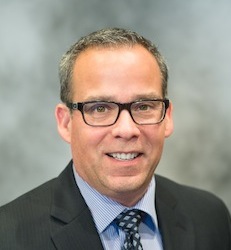 Mike Trevorrow, GM
‘T’ is for top performance
The assembly hall at LDT – and at LGR – follows a T-shaped design which enables the efficient delivery of supplies via numerous docks along the line. One corner of the ‘T’ takes care of chassis assembly, the other deals with testing and inspection; the longest stretch is the trim area. “We think it’s the optimum layout,” Trevorrow comments.

On the chassis line, the bodies are suspended overhead while personnel complete underbody work. They are picked up from the sides so that the engines can arrive underneath by automated guided vehicle (AGV). The latter are also used to transport seats from the dock, after mechanical unloading, and follow a snake-like path by the line so as to create a buffer within a small space. A robotic arm is used to install each seat, then the operator fixes it in place with bolts. LDT also uses ergonomic seats which enable workers to slide inside the car bodies to perform tasks such as connecting wiring harnesses. Furthermore, the position of the cars on the conveyor can be adjusted to suit the height of the operator by the raising or lowering of the skillets on which they rest.

Ergonomic practices such as these enable workers of either gender or any height to complete the task efficiently, which Trevorrow says is “imperative for us, for them, for the process”. However, automation is an alternative solution for some processes; since launch, robots have been used to apply adhesives for the front and rear windows.

The assembly hall workforce is organised into teams of between four and six personnel, plus a leader. Each individual is trained for all tasks undertaken by the team, so although these are rotated they are completed in identical fashion. “We want people to do it exactly the same, every shift, every time,” states Trevorrow. This commitment to standardised work and the elimination of unplanned variation is the underlying principle of GM’s Global Manufacturing System, which was inspired by the Toyota Production System. “I don’t need mavericks,” says Trevorrow. He instils the mantra “build it right the first time” but adds that, if any problems do occur, in this system they can quickly be identified and corrected. He says that at each station 80% of the work is new and 20% consists of checking tasks completed by the previous team – and that 97% of the assembly tasks are first-time validated.

Various systems and processes have been established to error-proof the production. One of these is the line-side kitting of steering wheels in a rack fitted with sensors that can detect when a part is removed by a worker. Moreover, each vehicle travels on the conveyor accompanied by a box of its own components so that the workers cannot fail to fit the right parts. This is important, because the three crossovers are assembled on the same line, sequenced, and there is also some demand for customisation. 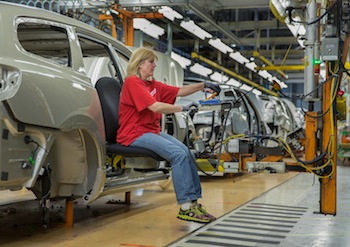 Ergonomic chairs are used for connecting wiring harnesses
In addition, the workers operate at a frenetic pace, usually with just one minute to complete the job. With the plant on three shifts, five days a week, and with overtime too, Trevorrow admits there is a risk of “burn out”. Indeed, LDT currently has a higher rate of absenteeism than other GM factories in North America.

The relentless drive at LDT is not surprising in light of the fact that its production line-up is focused on one of the most popular segments in the US market, crossovers. Trevorrow points out that, despite these models being “kind of late in their lifecycle”, sales are still on the increase. In August, the plant celebrated the production of its 2 millionth vehicle, a 2016 Buick Enclave; more than 500,000 Enclaves have been sold worldwide and 2014 sales were up 39% on the first full year of production. In celebrating this milestone, GM hailed LDT’s contribution to its cumulative total of 500m vehicles built globally – “more than any other automaker”.

At launch, GM Lansing Delta Township (LDT) became the first automotive manufacturing facility in the world to be certified at Gold standard for Leadership in Energy and Environmental Design (LEED) by the US Green Building Council. The award reflected the fact that sustainability was factored into the plant from the very beginning; for its construction, more than 60% of the materials were sourced from within 500 miles of its location, 25% of these being recycled. Furthermore, 80% of the waste generated during the build process – 3,963 tons – was diverted from landfill. GM also took care to use heat-reducing polymer for the roof and to avoid ozone-depleting substances in the heating and cooling, refrigeration and fire suppression systems. A 75-acre wildlife habitat was integrated into the design and is still maintained today, despite the recent expansion.

In 2011, LDT also won an Energy Star award from the US Environmental Protection Agency, for performing in the top 25% of comparable facilities nationwide for energy efficiency. It is claimed that the plant has 45% lower energy costs than the industry standard, with reduced overhead lighting cutting energy usage by 20%, or 3m kWh per year. In the existing bodyshop, energy is saved by an automatic shut-off for areas where personnel are not present, although the expansion will use LEDs.

Rainwater is harvested from the roof, and non-manufacturing water use has been reduced by 45%, saving over 4.1m gallons per annum. The plant has also implemented multiple recycling strategies to deal with waste from its own manufacturing operations and the deliveries from suppliers.