As November marks the 40th anniversary of the original press-hardened steel patent, AMS takes a look at how the technology has evolved and where it is heading next in an era of mixed-material vehicle production 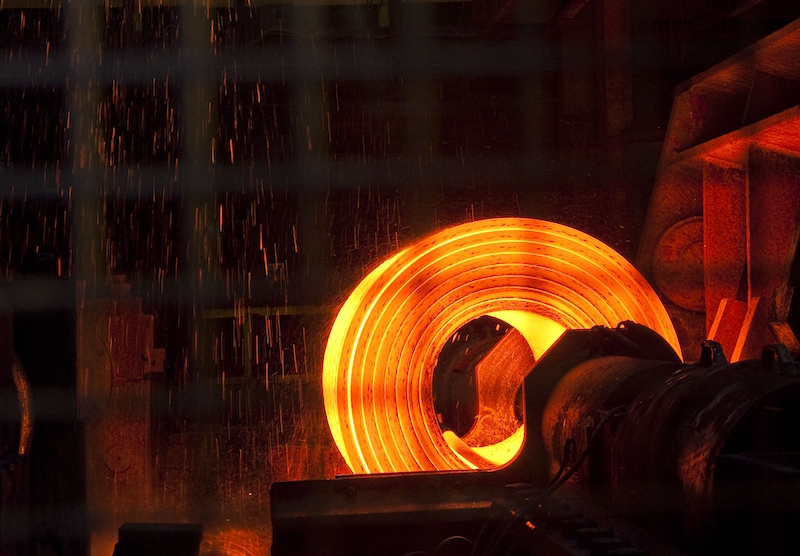 The fundamental principle of PHS is essentially the same today as it was 40 years ago, when Swedish tier-one supplier Plannja HardTech, a subsidiary of Norrbottens Järnverk, secured the patent, but new forms of the technology and developments across sheet-steel chemistries, coatings, microstructural control, process efficiency and automotive structural design should expand its wider application and ensure its continuing importance in the era of the multi-material vehicle.

PHS was originally intended for agricultural parts such as mower blades but from 1975 the technology started to move towards automotive thanks to collaborative R&D between Plannja HardTech, Volvo Trucks and Luleå University of Technology. In 1980, contracts were signed between Plannja HardTech and Saab, Rover and Jaguar to develop PHS side-impact beams and in May 1984 the Saab 9000 became the first production passenger vehicle to use PHS.

The PHS side-impact beams were, however, three times the cost of conventional cold-formed, high-strength steel parts. They also suffered from scratching, warping and oxide scale (needing removal by shot blasting) and could not be welded, instead being fixed by three large rivets. Yet, owing to the ultra high strength, with minimum yield strength of 950MPa, the side-impact beams could be down-gauged by 50% while still meeting the stringent requirements of the American side-impact test. Still in pursuit of crashworthiness, Saab considered replacing the PHS side-impact beams with CFRP alternatives but these parts, designed by sister company Lotus (under General Motors ownership), were heavier and four times the cost of the PHS versions.

Opening up the PHS marketUp until the mid-1990s, the PHS market was monopolised by various divisions of SSAB, with the steel manufacturer exclusively supplying the sheet boron steel and the tier-one component maker (owner of the PHS patent) exclusively supplying the PHS parts. However, during the late 1990s, the PHS patent expired and this opened up the market to competitors; PHS soon reached the mainstream automotive market, albeit largely confined to Europe.

By this time, PHS had become significantly more efficient. Through cooperative agreements between steel manufacturers, tier-one suppliers and OEMs, the boron steel chemistry for press hardening was refined to create the optimal combination of final part mechanical properties, cost and weldability, in what has universally become known as 22MnB5, a mild carbon-manganese-boron, low-alloy steel of typically 0.20-0.25 wt%C, 1.1-1.7 wt%Mn and 0.001-0.005 wt%B. The minute boron addition imparts exceptional hardenability and an ultra-high-strength martensitic microstructure in the component. Sheet 22MnB5 is now available from numerous steel manufacturers worldwide, such as MBW1500 from ThyssenKrupp Steel and Usibor1500 from ArcelorMittal.

Press-hardened steel (PHS) technology was invented in the early 1970s and filed for patenting in 1974 by Swedish tier-one supplier Plannja HardTech, a subsidiary of Norrbottens Järnverk, one of the three predecessors of SSAB. The patent was published on November 2, 1977.

The fundamental principle of PHS was cited as follows: “a hardened steel article is formed by heating a hardenable steel blank to hardening temperature (750-1,000oC, preferably 900oC) and then placing it in a forming apparatus in which the blank is deformed and simultaneously rapidly cooled to obtain a martensitic and/or bainitic structure while the blank remains in the apparatus which serves as a gauge for preventing distortion… Cooling is by cooling parts of the forming device and/or by direct cooling with salt water or oil”.

The patent stipulated the use of boron steel, a technology which was also commericalised by Norrbottens Järnverk – as far back as the mid-1900s. 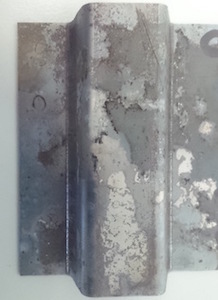 The process of aluminisation took PHS to the next level. Hot-dip, aluminised sheet steels have been used for decades in high-temperature applications, owing to their oxidation resistance in such conditions. ArcelorMittal patented hot-dip, aluminised sheet boron steel for press hardening in 1999 and the first commercial application occurred in 2007.

In addition to the first patent, which stipulates the application of aluminising coatings to sheet boron steel, ArcelorMittal holds a second patent specifying the use of aluminised sheet steel in the press hardening process. This second patent has thwarted attempts by rival steel manufacturers to eliminate boron from the sheet steel substrate and bypass the first patent. Aluminised sheet boron steel dominates the PHS market and is considered the benchmark.

Coatings are firstly designed to protect the sheet-steel substrate from oxidation and decarburisation at the elevated temperatures of press hardening; oxidation increases tool wear and requires shot blasting following press hardening to provide acceptable weldability, while decarburisation creates heterogeneous hardenability and mechanical properties through part-gauge (not necessarily detrimental, depending on the application). Coatings are secondly designed to provide some cathodic corrosion protection of the final part, although this is not essential for dry-zone areas of the body-in-white.

The relative lack of cathodic corrosion protection and, most significantly, intense thermo-chemical attack by the aluminising coating on the press hardening line have been two of several limitations of aluminisation. Combined with the legal stranglehold of ArcelorMittal, which drives the cost of aluminised sheet boron steel to more than €900 per tonne ($1,061), a significant area of current research is alternative coating development, such as a novel graphene-based formulation patented by Tata Steel Europe in 2017.

Tailoring the technologyThe concept of anti-intrusive and impact-energy absorptive crashworthiness was defined by the ‘safety cell and crumple zones’ principle of Béla Barényi at Daimler-Benz, patented in 1951, in which the safety cell encloses the passenger compartment and the crumple zones are located around the cell, notably at the front and rear. The ultra-high-strength martensitic microstructure of 22MnB5 PHS is ideal for anti-intrusion. For impact absorption, however, lower yield strength, high ductility and greater toughness are required. PHS developments have most recently focused on improving impact absorption, and the combination of anti-intrusion and impact absorption in a given part (with tailored properties) to optimise load management.

ThyssenKrupp Steel patented tailored heating technology in 2005 and the first commercial application was the B-pillar reinforcement of the 2006 VW Tiguan. The blank is heated differentially, omitting isolated regions from furnace heating above the critical Ac1 temperature (by masks) and thus maintaining a ferritic microstructure in the final part, with significantly lower strength, higher ductility and greater toughness (soft zones) than the hardened martensitic microstructure. 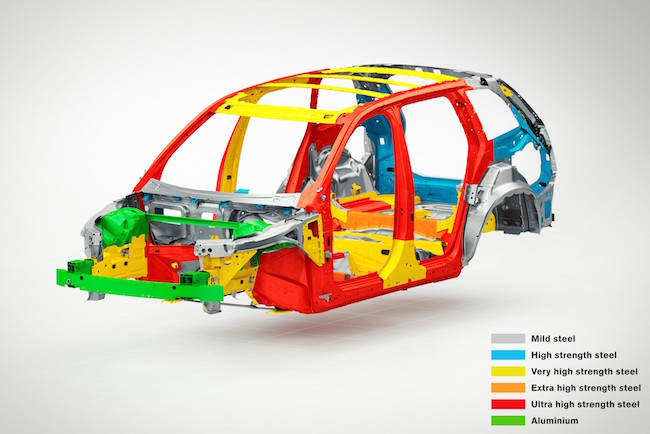 To date, the 2014 Volvo XC90 is still the most PHS-intensive production passenger car; 38% of the body-in-white is PHS

To the rear of the crash box is the front-side longitudinal member. This is manufactured from a PHS tailor-welded blank, with predominantly ferritic, low-carbon manganese-niobium steel constituting the majority of the member (connected to the crash box) and martensitic 22MnB5 linking to the front bulkhead reinforcement (safety cell). The front side member sits in parallel above the front-side longitudinal member and is manufactured from cold-formed, low-strength ferritic steel. The front-side longitudinal member and front side member exhibit pre-defined bend lines and curvature, which in combination with the relatively low yield strength and high ductility of the materials, plus the relatively light gauge, promote progressive axial collapse, followed by inward bending, folding and collapse along a pre-defined load path so as to maximise impact absorption.

Associated with the introduction of tailor-welded blanks, boron-free sheet steels were introduced to press hardening alongside the traditional 22MnB5. ThyssenKrupp Steel introduced its MBW500 product in 2007, while ArcelorMittal launched Ductibor500 in 2009, both of which are based on low-carbon manganese-niobium chemistries intended not to fully harden to martensite and to exhibit predominantly ferritic microstructures in the final part.

A further development from the tailor-welded blank was the tailor-rolled blank, patented for press hardening by Benteler in 2002 and first appearing in the B-pillar reinforcement of the 2012 VW Golf. Areas of the blank are locally rolled to different gauges and then press hardened. This permits the allocation of thicker gauges where maximum stiffness and buckling resistance for anti-intrusion are required, and thinner gauges in areas needing lower stiffness and collapse for impact absorption (while lightweighting).

ThyssenKrupp Steel patented the tailored tempering (quenching) technology in 2006 and the first commercial application was the B-pillar reinforcement of the 2011 Audi A6. The part is cooled differentially, with some regions exposed to retarded cooling rates, by heating elements integrated in the forming tool. This promotes localised auto-tempering of martensite, bainite formation or even ferrite formation (soft zones). 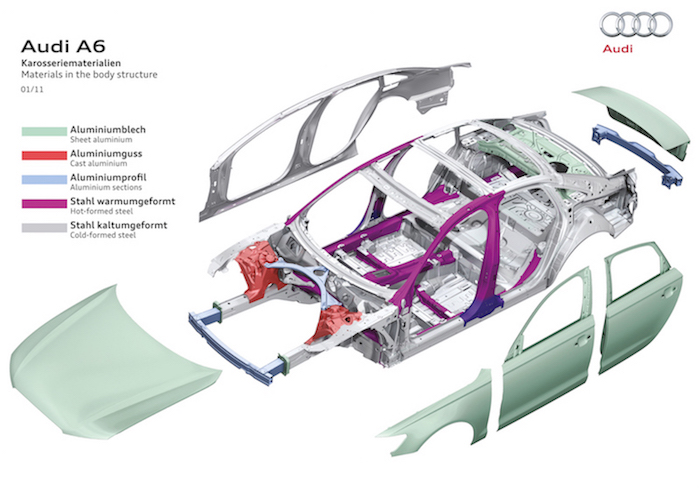 Moving into the multi-material eraLooking to the future, select OEMs are due to increase the application of PHS four-fold in model updates between 2015 and 2020, a good example being the 2016 Honda Civic. The increasing application will be supported by evolving technologies covering sheet-steel chemistries, coatings, microstructural control, process efficiency and automotive structural design. Sumitomo Metal Industries initiated the so-called 1800 MPa class of PHS, first applied to the bumper reinforcements of the 2013 Mazda CX-5; ThyssenKrupp Steel and SSAB followed with comparable products launched in 2016 and 2017 respectively, making PHS the strongest sheet material in automotive body engineering.

Automotive production has entered the age of the multi-material vehicle, which the various material industries including aluminium, CFRP and steel should embrace, seeking ways to optimise lightweight, hybrid construction in cooperation as opposed to competition. The decision of Audi to switch from aluminium alloy to PHS for numerous parts of the 2018 A8 safety cell is a prime illustration of the significant role PHS can play. As the incentive for lightweighting combined with crashworthiness continues to grow, fuelled directly by more stringent emissions legislation and indirectly by low-carbon technologies which add weight and crash hazards (for example, batteries in electric vehicles), the demand for PHS is set to increase.

Besides the traditional safety-cell applications, the use of PHS across the automotive architecture, such as crumple zones, chassis and suspension, and battery storage, merits greater exploration. State-of-the-art PHS technologies include exploitation of part consolidation and geometric freedom for optimised impact absorption of crumple zones; composite PHS; particle vapour deposition (PVD) and chemical vapour deposition (CVD) coatings; in-tool resistance or induction heating and post-processing, including shearing and further heat treatment such as quench and partition; pre-cooling as a means of avoiding liquid metal embrittlement when using zinc-coated steel; and multi-material structural design and joining to optimise lightweight hybrid construction. It may be 40 years since the patent was secured, but PHS still has lots of potential.

Tom Taylor is a research fellow at the Institute of Industrial Science, University of Tokyo