As production facilities grow in complexity through the interconnection of cyber, physical and human capabilities, automotive manufacturers are encountering additional safety risks alongside new possibilities 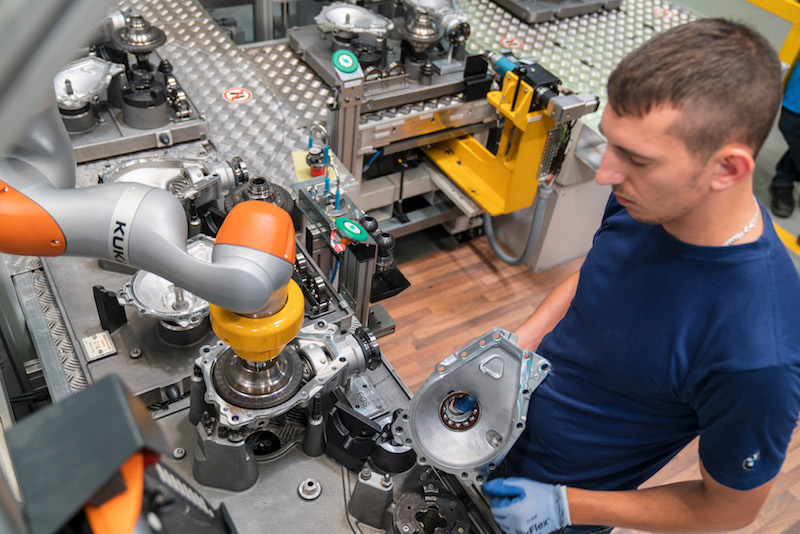 Automotive manufacturing is entering what Christian Dunckern, head of BMW Group Production System, Planning, Toolmaking and Plant Engineering, calls “the time of smart devices and digitalisation”, during which modern robots, smart devices and exoskeletons will support employees “as a direct part of people’s work environment”. According to Dunckern, this developing manufacturing landscape provides “a growing range of options on how to advance the production system”. However, it also creates safety challenges as the boundaries between man and machine quite literally disappear.

One element of BMW’s factory modernisation strategy, announced in March 2017, is the greater use of lightweight robots working alongside humans, which will increase in number from 40 to 60 by the middle of this year. As well as tasks requiring a high level of precision, the machines will take care of strenuous and repetitive tasks, therefore alleviating the ergonomic burden on workers – but also potentially increasing safety risks.

However, BMW already has some experience in this area, having installed its first such robot, ‘Miss Charlotte’, in 2013 at Spartanburg, South Carolina, for the fitment of door insulation. More recent examples from Germany include a robot at Leipzig which applies adhesive to windows and another at Dingolfing that lifts and installs bevel gears. In the absence of traditional safety fences, sensors are used to stop the robot if contact is made with any obstacle, including a worker. A project in the transmission installation unit at Regensburg, Germany, has furthermore shown that direct man-machine cooperation is possible with large-scale industrial robots, using similar safeguards.

“We are convinced that, in the future, new contact-free sensor systems based on things like ultrasound or radar will intensify the cooperation between humans and assistance robots" – Henning Loeser, Audi

Audi first used a collaborative robot for final assembly in 2013

Fellow German OEM Audi also lists human-robot collaboration as a key element in its Smart Factory concept for future production. Two years after the installation of an adhesives robot in one of its Inglostadt bodyshops in 2013, Audi implemented the Volkswagen Group’s first human-robot collaboration in final assembly when it introduced the ‘PART4you’ machine at the same plant for the transfer of coolant expansion tanks from boxes to human operatives.

The OEM has now implemented nine human-robot projects in series production, and according to Henning Loeser, head of Audi Production Lab, five more are due by the end of 2017. “The uses range from assisting in the reliable application of adhesive to support in monotonous joining operations and to reducing strain in jobs with non-ergonomic body positions,” he says. “The first robots are already working side-by-side, performing measuring and inspection tasks in continuous production.”

Loeser explains that the protective measures for personnel are dependent on the specific application, but range from contact-free light curtains and laser scanners with programmable safety areas through to tactile sensitivity in the robots themselves. “Especially in the latter case, however, the entire production environment must be taken into account. This means, for instance, that any points and sharp edges on components and grippers must be either rounded off or covered,” he states.

Illuminating production safetyAs vehicle-makers introduce more human-robot teams in their factories, sensor suppliers such as Sick can expect an upturn in demand for high-tech solutions to protect personnel. Martin Kidman, product specialist for machinery safety at Sick UK, explains that, while physical barriers such as fences and gates are still used in situations where parts might be emitted or stopping times are long, mechanical safety measures tend to slow processes down and are “prone to wear and tear”. By contrast, more advanced technologies like light curtains can easily tackle safety requirements in areas where operators and maintenance workers need regular access, while laser scanners are often used to prevent a machine starting up when a human is inside a robot cell.

Having been introduced in the 1950s, light curtains are not a new technology, but Kidman says they have come a long way from the days when they were limited by their size, range, response times, versatility and configurability, and are now “a sophisticated and versatile safety tool that also facilitates productivity in continuous, automated factory processes”. Infrared technology has increased their range to over 70 metres at the same time as the units themselves have become smaller and more compact. “Response times are also much better with transistor outputs rather than electromechanical relays,” states Kidman.

Integrated functions now include: blanking, in which certain beams are switched off to enable permanent fixtures to break the light curtain; beam coding to prevent two curtains interfering with each other; bypass/override, temporarily suspending the safety function; and muting, to differentiate between people and objects and therefore allow the passage of material while providing access protection.

Evolving light curtains and lasersSick’s own products exemplify the most recent developments, which focus on enabling greater flexibility in the manufacturing operation without compromising either safety or productivity. For instance, Kidman describes the C4000 as a “smart” light curtain with “extensive integrated logic functionality”, meaning that it can perform multiple selective protection tasks without additional laser scanners, proximity sensors or safety relays. Dynamic guarding is used to differentiate between complex objects in the area and other items or people in situations where material must pass through a hazardous area. The C4000 was launched in 2000 and a product named after its multiple light beams, the M4000, was introduced in 2005, but Sick’s product range has diversified to cater to many different production environments.

The company’s most recent product, launched in the past few months, is the Safe Portal Solution, which uses laser scanner technology. Operating up to four simultaneous protective fields from two vertically installed scanners, the equipment offers high flexibility, bi-directional safety and continuous protection despite having a smaller footprint and fewer components than a conventional light curtain.

As in Sick's Safe Portal Solution, lasers can be used to protect personnel – and productivity

According to Kidman, it also offers advantages in muting scenarios. Since a light curtain is ignored during muting and therefore will allow a human to go undetected, physical barriers are typically used as extra protection, but this limits the manufacturing process to one variant. By contrast, Kidman explains, “A safety laser scanner can change its field on a mute which can follow the contour of a car. It is programmable and multiple contours – 64 – can be set up inside a scanner to switch automatically according to the product passing through.”

Possible applications of the Safe Portal Solution include the transfer of car bodies, engine and powertrain assemblies on automated guided vehicles, or the transport of parts and subassemblies via pallets on conveyors. Since the product is so new, it has yet to be installed at any OEM facilities but, given the multitude of benefits, this situation will surely soon change.

Meanwhile, vehicle-makers have their own visions for progress in production safety. Audi’s Loeser says, “We are convinced that, in the future, new contact-free sensor systems that are based on things like ultrasound or radar will further intensify the cooperation between humans and assistance robots. This is why we are also cooperating in these types of research projects and watching developments very closely.”

The Industry 4.0 revolution which is beginning to transform automotive manufacturing through the interlinkage of cyber and physical systems will inevitably result in greater volumes of data flooding through vehicle-makers and suppliers alike. Although this presents huge opportunities for boosting manufacturing flexibility and productivity, and safety, it also poses challenges in terms of information management.

An expert in the field, Rockwell Automation conceives this complex production environment as ‘The Connected Enterprise’. “You can collect – and we have, for many years – tonnes of data. But what do we do with all this data, how do we manage it?” asks George Schuster, business development manager and TÜV functional safety expert at Rockwell. “Initially we were working on the connectivity part of it and that infrastructure is largely laid down. The next part is the analytical capability to correlate data to specific events on the plant floor.”

“There are so many data sets that people are considering today as valuable and safety is usually not the first one that jumps up,” he admits. “Throughput, block/starve, OEE [overall equipment effectiveness] and quality – these are the ones that seem to be top of mind for most manufacturers. But safety is really beginning to emerge as another KPI [key performance indicator] and valuable data set from the plant floor.” He says the underlying reasons are that such data provides insights into downtime and the use or misuse of systems across different applications, shifts and plants in the production network; plus, it helps companies to document and improve compliance, as well as to validate systems throughout their lifecycle.

Measuring the actual frequency and duration of light-curtain interruptions against expected rates can provide insights into what is really happening on the plant floor, as illustrated by software from Rockwell

For example, collecting data on the interruption of a light curtain enables a manufacturer to compare actual frequency and duration with expected rates, and then to investigate the cause of any anomalies. A high value might indicate misuse or dangerous violations by personnel, while a low value might indicate a failure to conduct checks, data fakery or the bypassing of safety protocols. “That’s a red flag waving, to say we need to find out the root cause,” he says. “It kicks off an investigative process to determine why that frequency is so far above or below the design intent frequency.” Since Schuster mentions that another technological advancement will be the biometric authentication of personnel and the tailoring of machine behaviour to individual competencies – an additional safety measure – it seems possible that details on “who” and therefore ‘why’ could soon be added to ‘what’, ‘where’ and ‘when’ such anomalies occur, though it would depend on which systems are authenticated.

Although unwilling to put a timeframe on the full emergence of ‘The Connected Enterprise’, since businesses are progressing at different speeds, Schuster says that three key conditions are now in place: the implementation of Ethernet-based infrastructure; recognition of the relationship between safety and security, plus their role in the management of overall risk; and the evolution of analytical tools to make sense of the data. “Those are three pivotal things that I have never seen converge until today,” he concludes.