When it comes to America and automotive manufacturing, some things are impossible to ignore. Foremost among them are: The Big Three, the light truck segment and Trump. In our latest global region supplement, we bring you the full set. 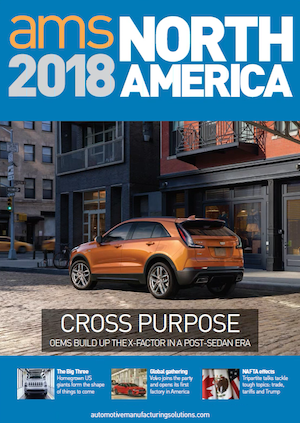 In this AMS special supplement we examine a region that produces around 18 million vehicles every year, for long-established markets, against this backdrop of politics, technology and rapidly developing industry megatrends...

NAFTA numbers Production figures highlight the continuing inter-relationships, the boom in light truck production and the strong and steady rise of Mexico

The saga so far There have been seven rounds of talks since NAFTA renegotiations began last year but its trio of member nations are no closer to agreeing a deal. Nick Gibbs reports

Home truths Once battles over tariffs are settled, North America’s homegrown brands can focus on the rapid and significant changes the domestic market is demanding. Ian Henry reports

Transatlantic ventures Volvo is the latest European OEM to take up a North American production base, Ian Henry writes, joining Germany’s giants in exploring benefits while coping with the complexities

The X-Factor The introduction of Cadillac’s new XT4 crossover has brought a more positive outlook to GM Fairfax. Gareth Price speaks to plant manager Bill Kulhanek about the new era

A bigger, bolder Belvidere The transfer of the Jeep Cherokee production from Ohio to Illinois was the first part of FCA’s response to the growing demand for more SUVs. Mike Farish reports

The man who saved Fiat and Chrysler A remarkable man who dominated the automotive world’s news agenda, Sergio Marchionne’s passing robs the industry of one of its few star names, writes Ian Henry

Rouge alert It’s been part of Ford real estate for more than a century but, as Gareth Price discovers, the historic Rouge Center houses a truck plant shaped for modern times

Scandinavian Settlement A new plant has been born in an extremely turbulent political environment – Volvo’s first in the US. Michael Nash reports

Spoilt for choice Eight different models are made at DTNA’s Cleveland plant, and a high level of customisation means that thousands of options are available to customers. Michael Nash reports

Southern hospitality Gareth Price visits Hyundai’s major manufacturing facility in Montgomery, Alabama, as it welcomes the return of an SUV to its production lines

Stamp of approval Once a small Tennessee town, Smyrna these days is home to the largest stamping plant in Nissan’s network. Gareth Price reports