One of the clearest advantages of grounding studs is they are self-piercing. This means that each stud makes a neat hole through the sheet metal component. This technique provides a proper, clean metal contact between the stud and the sheet metal part. Furthermore, due to this specific riveting process, the connection point is rolled in. This characteristic means the connection point this protected against many external influences. As there is no sheet metal corrosion there is no reduction in conductivity.In addition, the Profil system is suitable for use in both steel sheet metal, steel sandwich materials and aluminium sheet metal, so for manufacturers such as JLR, who produce both steel and aluminium and indeed mixed metal (steel and aluminium combined) bodied vehicles, the Profil solution works for all applications.

A classic solution of a welded earthing stud

The Profil nut and stud assembly is used on Jaguar XE, XF, F-Pace, and E-Pace, and also on Range Rover Velar, Land Rover Discovery and Discovery Sport, it is now the default choice for grounding connections on all JLR products in both dry internal applications and also wet area applications, indeed one could say that given the off road performance of JLR products these are some of the most demanding applications in the automotive industry today.

The Profil system has also been adopted by BMW, Porsche, Mercedes-Benz, and Renault, especially in critical areas of vehicle bodies.

One of the clearest advantages of Profil grounding studs is that they are self-piercing. This means that each stud makes a neat hole through the sheet metal component. This technique provides a proper, clean metal-to-metal contact between the stud and the sheet metal part in thin sheet applications (0,7mm to 2,1mm). An additional design is available for thicker materials (2,2 to 4,0mm) which is also self-piercing, however this product does not pierce fully through the parent material.

During Profil’s manufacturing and assembly process the nut is installed to a controlled torque figure and then within the same assembly machine a locking feature is created on the top face of the nut, this ensures two things; firstly the nut cannot come loose during transportation, handling and installation into the sheet metal; secondly, the pre-applied torque ensures that there is no electro coat or paint ingress between the faces of the nut and stud, thus ensuring a clean metallic surface is maintained ready for cable shoe connection in the final assembly area, and throughout the service life of the vehicle.

When the wiring cables are installed, the nut of the stud is disassembled, which presents a proper, clean, unpainted metallic contact face for cable shoes. The same nut is then re-used to secure the cable shoes and a good ground contact is assured.

It’s a system applied and homologated by various OEM customers, including Mercedes-Benz, BMW, JLR and Porsche. Grounding studs solved the problem of grounding on steel sandwich material as well as on aluminium structures. A good and consistent grounding system is essential to assure the functionality of all systems in vehicle electrical system, from engine management through safety features such as air bags etc.

Another OEM uses the studs on the critical point around the fuel system. The OEM’s validation and corrosion tests are showing good conductivity compared to the classical welding solutions. 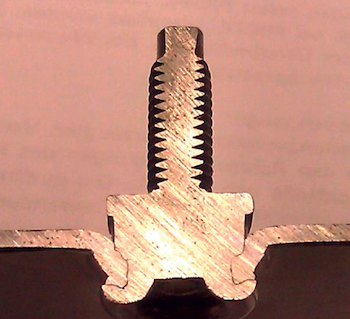 The self piercing element is designed to work well with the modern, lightweight, mixed material of the BIW

There is especially an advantage with the increased use of lightweight materials, such as aluminium, where the installation of grounding studs by welding is increasing due to the more complex welding process of aluminium.One OEM that has changed to the Profil system has been able to reduce its average ground points per vehicle from 30 down to 22, which gives considerable cost savings in inventory and process time as well as being more environmentally friendly reducing energy consumption, and pollution and manufacturing carbon footprint.

The flanged nut of these studs has a special design to avoid any paint bleed in between the nut and the stud. The nut has a full metal prevailing torque feature, which prevents the nut dismounting itself. This ensure that even in the most rigorous conditions the good ground contact is maintained.

The studs can be installed manually for low volume or prototype situations or by fully automatic processes integrated into customer body assembly facilities. The various different systems are already developed and have proven their reliability for customers for a long period of time.

The studs can be supplied with different surface coatings. Profil recommends a galvanic coating, which provides optimal installation performance. However, the specification can be defined in liaison with OEMs to remain in keeping with the car makers’ own demands. Profil studs are already in place at some manufacturers in operating in China.

TrendsToday’s automotive industry uses a patchwork of different metal technologies and non-metal components adapted for a variety of applications. The use of high-strength steel is increasing, sheet metal thickness has been reduced and the combination of metal and plastics is more commonplace.

OEMs are endeavouring to optimise different types of material for the best weight/cost relationship and crash test outcomes. Taking the door hinge as an example, vehicle designers are placing more functions into a fastener (centring, spacing, fixing, sealing functions etc). So while the prime function to fix one part to another is retained the quantity of special fasteners adapted to the extra tasks is increasing.

Profil deals in a variety of distinct fastenings, offering options to customers, preferring to be viewed as partners, rather than merely suppliers. In one example, developed a special type of fastener which became the basis for a new fastener family – a centring bolt for a Renault Megane sheet metal part. Profil also developed a hinge reinforcement, as a special fastener, for the Renault Scenic.

In an example from Mercedes-Benz, development centred on the reduction of engine noise in the A-class. A key element for noise reduction is the sheet metal firewall between the engine area and passenger compartment. Mercedes-Benz elected to use two 0.6mm sheets plus polymer filling material. Profil developed an earthing stud with a preassembled nut. Once the nut is disassembled, the surface is open for the mounting of cable. The nut and the stud perform several functions: bridging the layers and creating a clean surface following the painting process. A further instance saw Profil develop another special fastener for Mercedes-Benz, on the firewall, suitable to be grabbed by an assembly robot to subsequently position the sheet metal part accurately.