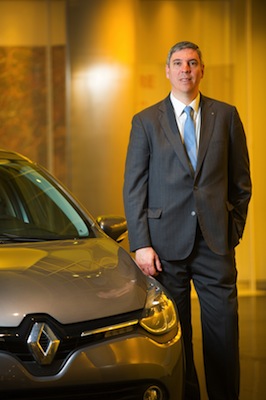 Glenn Brooks (GB): Could you give an overview of the Renault Group’s European manufacturing operations?

Jose-Vicente De Los Mozos Obispo (J-V O): We have operations in France, in Spain, in Romania, in Slovenia and in Turkey. During the last year, we decided we must improve our competitiveness and to fight – to continue with all our plants – but as you know, Europe has overcapacity. Now we have a new competitive agreement in France and in Spain.

Also, we have a manufacturing footprint in Africa. That is Tangier and Casablanca, and from November 2014 we will have a CKD operation in Algeria. Dacia has become very successful in Europe and we export to Europe from Morocco, from the Tangier plant – the Dokker, Sandero and Lodgy models come from there. Our footprint in North Africa complements Pitesti [the Dacia factory in Romania].

GB: Russia is not part of Renault’s definition of European manufacturing operations?

J-V O: No. There are five regions: Europe, Euro-Med Africa, Russia, the Americas and Asia-Pacific. Russia has the AvtoFramos plant in Moscow, which is very efficient, and AvtoVAZ, which will produce a new Renault car in Togliatti.

GB: Your company’s latest model, the Twingo, is being made in Slovenia alongside a car for Daimler’s smart brand. It’s a new platform, so that’s a big change for Novo Mesto.

J-V O: Novo Mesto is one of the biggest and one of the best plants in our Alliance. It’s very efficient, they have produced Clio and Twingo in the past so they have a high ability to produce small cars. Total investment for the new Twingo has been €450m ($616m).

The main investment was in the new platform, which as you know has the engine at the back and rear-wheel drive, so a total change compared to the second-generation Twingo. Also, we have invested in a new bodyshop – a new building, new processes – but the paintshop has been carried over as it was already well prepared for the new models.

J-V O: No, it’s the same line as we had for the previous Twingo.

GB: When did production begin?

J-V O: From the beginning of April, and ramp-up into May.

GB: When will the electric Twingo be added to the line, and then the four-door smart model?

J-V O: The platform would be ready for a Twingo Z.E. but this car is no longer planned. I cannot talk about what we are doing for Daimler but I will say that we have a very clear schedule, we are running to it, and so are all our suppliers.

GB: Is the new vehicle architecture which will go into Daimler’s own smart factory the same as what Novo Mesto is now making?

J-V O: Yes. I visited Smartville [Hambach, France] two weeks ago and they will have this platform for the next Smart Fortwo. Same processes, same standards.

GB: Is ‘Edison’ the official term for this new rear-engined platform?

J-V O: That is just what we call it inside Renault.

GB: If there were to be other Edison platform models in the future, how easy would it be to build them at Novo Mesto?

J-V O: Because the initial plan is to have two shifts at the beginning, we need to wait and see what the market requirement is. But we have the potential to work three, or even four shifts. Slovenia is a country where this kind of flexibility is possible."One of the biggest lessons from the economic crisis for carmakers is thinking as a global business; you must develop global cars. But the global industrial footprint cannot be changed in just one year."
– Jose-Vicente De Los Mozos Obispo, RenaultGB: You have a good problem in Spain at the moment – lots of orders for the Captur. How flexible is Valladolid?

J-V O: The plant is flexible in that we have designed in the need to produce ‘bi-colour’ cars – the roof can be ordered in a different colour – so we needed to be highly flexible even for just this reason. And customers have been ordering this option even more than we had anticipated; it is around 80%.

We are working with our suppliers to reduce bottlenecks and to increase our capacity. This is being done in two phases: first, from April, and then again in September.

J-V O: We started shipping there in the last quarter of 2013. The car is not so different from the Renault Captur, but in Korea it is the Samsung QM3. One of the reasons for RSM is we can give them a small crossover with a diesel engine, which is an advantage in the Korean market.

GB: What is causing the bottleneck?

J-V O: Certain suppliers are at maximum capacity and they cannot deliver the required number of components. Not one particular component; there are several, because the orders are running at more than twice what we forecast. We are working with several suppliers to increase their capacities.

GB: How closely do you work with your counterpart at Nissan Motor?

J-V O: This is Fumiaki Matsumoto. He is EVP for Manufacturing and Supply Chain Management (SCM) operations. We have a very good approach to working together and I worked in manufacturing for Nissan for some years. I know Nissan very well – [I spent] some time with [Nissan director] Colin Dodge in the UK, and in Spain, in Japan and of course we work extremely closely in the Alliance.

GB: Both Alliance partners have talked a lot about the new CMF architecture. Will all global plants that make such models be retooled in an identical way? Is that part of the planned savings?

J-V O: No, not identical. Nissan has the first models [the X-Trail/Rogue and Qashqai] and there will be multiple Renault models [the Mégane, Scenic, Laguna, Espace replacements] too, but at Renault we are still in the development process. In the future, we will have this common platform, and for manufacturing – yes, a common approach. 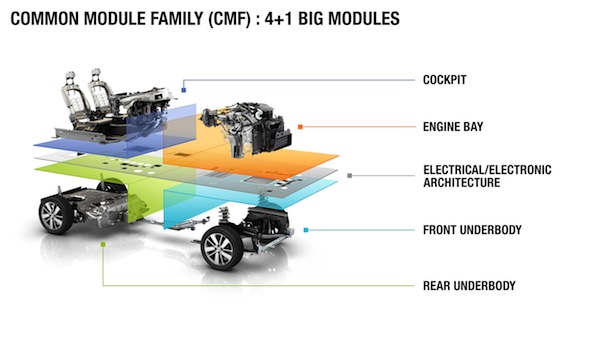 GB: Will you put CMF models into Renault plants in developing countries – Brazil, Russia, Turkey – or will you keep building cheaper but old-technology vehicles for many years to come?

J-V O: I think one of the biggest lessons from the economic crisis for carmakers is thinking as a global business; you must develop global cars. Because even if people live in a country which does not have the same economic power as the richest countries they still want the latest models. So we must keep developing platforms which give people the highest standards, whichever the region where the cars are manufactured. But you cannot do this in one year – maybe five, ten years. The global industrial footprint cannot be changed in just one year.

GB: Are shared platforms and shared powertrains the key drivers of manufacturing cost reductions for Renault?

J-V O: We have in the past produced some platforms for as few as 200-250 cars. Now with CMF, the Alliance will be making around 2m cars [eventually, per annum], which means compared to some of the vehicles we make [in the same C/D segments], that is ten times the volume. But CMF is not the only one.

GB: I take it you are suggesting CMF-A? How will building future small cars in India differ from making cars at your higher-cost plants in Europe or North America?

J-V O: Yes, A-platform we are going to put into Chennai [as previewed by the Datsun redi-Go concept at the 2014 Delhi motor show]. We have said that the first Renault CMF-A model will be made there in 2015. For the moment, we have not decided if we are going to produce this platform in Europe or somewhere else. It’s being studied. A-platform for Chennai doesn’t mean big changes. OK, there are changes for the bodyshop but this is the biggest investment.

GB: Are you seeing a trend towards demands for higher wages in countries which were once low-cost for Renault?

J-V O: Dacia has been a very good opportunity for low cost. Last year, sales increased by 90% in Europe. In Spain, where we know the market has fallen by almost two-thirds, Dacia sales have risen by 80%. Dacia is maybe not a classic low-cost manufacturing operation but it is a good example. I don’t think we can generalise about this. Case by case, in each market, the situation is different. India is still a new market for Renault.

GB: Pitesti used to be the showcase plant for Renault Group. And now?

J-V O: If you saw Pitesti ten years ago, before the first Logan began to be built there, and then see it today, everything is different. Pitesti now has the first plant manager who is Romanian. That’s good for the people who work there to see this. The workforce is very good, quality is very good.

GB: Do you have responsibility for the future Dongfeng Renault (DRAC) plant in China? 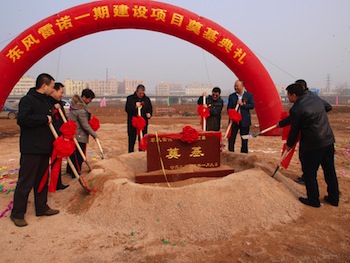 J-V O: Yes, I have sent people to the site in Hubei. I am following the advancement of the project. I have been there recently to see the land – but in China, things move very quickly. This plant is due to be opened in 2016 and everything is on track, the partnership with Dongfeng is very good. They have highly skilled people.

GB: The initial capacity is stated as being 150,000 but Renault has said this could be doubled.

J-V O: Yes, but right now is not the time to say. Let us build the plant first. I don’t know what the market will be like in the future, either.

GB: Is there enough land there for future expansion?

J-V O: It is a greenfield and there will be no problem to expand.

J-V O: I cannot comment on the models, but you are correct that we have said C and D-segment crossovers. There is always a big risk in every major investment but for DRAC, this will not be the first plant to build these models. It will be the second.

GB: You mentioned Morocco and Algeria earlier. Can you expand your manufacturing bases and export to Europe on a large scale from there? Will French and Spanish unions accept that?

J-V O: The markets of BRIC, we know about. I think in 10 years’ time, Africa will be talked about in the same way people now speak about the BRIC markets. OK, not all of Africa, but we are in the right markets. I would include even Turkey as well as countries in North Africa, and we have an Alliance plant in South Africa. When Africa starts to experience rapid growth, we will be ready.