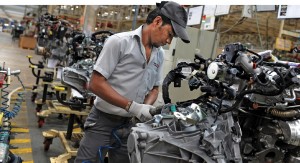 AMS reviews one of the world’s fastest-developing automotive markets in the context of a recent downturn, rising exports and a liberalised market

With a population of 1.2 billion and vehicle ownership of just 13 per 1000, India would appear to be an automotive manufacturer’s dream. Growth has already been astonishing over the past decade; last year the country produced just over 4 million cars and commercial vehicles (CVs), double the output for 2006 and up from just under 900,000 in 2002.

This growth looks set to continue in the long term. Analysts at IHS Automotive believe sales of cars and light CVs will reach 6-7 million by 2020, up from a predicted 3.7 million this year. Global vehicle-makers have responded by launching aggressive growth plans to establish manufacturing bases in the country; gone are the days of a protective government restricting foreign investment for the sake of an antiquated homegrown industry.

From protectionism to promotion
Liberalisation of India’s automotive industry began in 1993, prompting partnerships such as Maruti Suzuki (cars) and Hero Honda (motorcycles). From 2000, direct foreign investment was largely unencumbered and in 2006 the government laid out its ambitious Automotive Mission Plan (AMP) to double the contribution of the automotive sector to $145 billion by 2016, accounting for 10% of GDP.

For vehicle-makers, the way was now clear to build and sell. “The result is that India is full of foreign OEMs all pushing hard,” wrote automotive analyst Max Warburton in a September report for Bernstein Research.

OEMs developing their presence in India include Renault-Nissan, which in 2010 opened a plant with a capacity of 400,000 in one of India’s biggest automotive manufacturing hubs: Chennai. BMW is there too, as is Hyundai, which recently built its five-millionth car there. Ford is also in Chennai, expanding capacity to 200,000 in 2010. Ford’s expansion in India currently involves the construction of a second plant in Gujarat, the newest of India’s vehicle-building centres. The facility will open next year with an annual capacity of 240,000 cars and 270,000 engines. General Motors is also building cars in Gujarat.

The third big car building hub is in Pune, where Volkswagen’s Chakan plant was inaugurated in 2009. The facility now has a capacity of 130,000 and is regarded by the company as one of the most modern sites in the Group. Nearby are assembly plants for Jaguar Land Rover and Mercedes. Fiat also has a plant in the area, while a second VW Group plant for Skoda and Audi lies upstate.

Meanwhile, Honda is adding car production to its second plant in Rajasthan, not far from its site near Delhi. The facility will come on stream in 2014 and will take Honda to a 240,000 capacity. Japanese rival Toyota makes cars in two plants near Bangalore.

First slump in a decade
However, the good times are currently on hold. Car sales fell by 5% in the first half of the financial year from April 2013, according to the Society of Indian Automobile Manufacturers (SIAM), and the tail-off in growth is starting to affect vehicle-makers. “This is the first time I’ve seen an economic slump in a decade. Before this there was no negative growth,” says Gaurav Vangaal, senior analyst, IHS Automotive for the Indian subcontinent.

Rising petrol and food costs have pushed up inflation and hurt consumers, leaving car-makers bemoaning the situation. “With domestic demand weakening and manufacturing activity stagnating, growth in the first quarter of F2014 dropped to 4.4% and is likely to see only marginal improvement, if at all, in the second quarter,” stated SUV specialist Mahindra in its half-year financial report in November.

From January to December this year, car and CV production dropped 8.7%, according to the International Organization of Motor Vehicle Manufacturers, and local media report that OEMs are extending production holidays to let weak demand catch up with supply.

As a result, IHS estimates that production facilities are on average running at just 50% capacity. Some are struggling even more. Max Warburton at Bernstein believes Tata Motors’ car plant at Pune is running at just 26% capacity, while its Sanand plant in Gujarat, which makes the Nano microcar, is at 21%.

Profit-making problems
Tata’s struggles on home territory show what a tough market India is for car-makers. “Price points are low, consumers are demanding, average production volumes are too limited and profitability is woeful,” wrote Warburton. “Almost no OEM makes good money in India apart from Maruti Suzuki and, at times, Hyundai.”

India’s cost-conscious market is dominated by A- and B-segment models under four metres long and Maruti Suzuki is the undisputed leader of that segment. Market share for the Indo-Japanese company has not dipped below 38% in the last five years, and it makes the country’s top two best-sellers in the A-segment Alto and B-segment Swift hatchbacks. In the 2012/13 financial year, the company sold over 1 million cars in India.

It is the sheer size of the company that enables it to make profits, according to Vangaal at IHS. “Volume is the only thing that works in reduction of cost,” he says. “When Maruti Suzuki need to reduce the bill for material costs, they have a larger bargaining power than someone like VW. Most of the benchmarking is compared to Maruti Suzuki.”

This is why Vangaal believes the premium players building in India will never go to full assembly, but instead will continue with CKD kits. “To manufacture here you have to have some economies of scale,” he says. “Premium sales are only around 30-40,000 in a market of 3.6 million.”

Growth after the downturn
The current slump has caused some bullish OEM growth plans to be rewritten. In August this year, Maruti Suzuki abandoned fairly advanced plans to build a third plant in Sanand, citing the slowdown, and in 2012 PSA Peugeot Citroën also put a halt to its Indian market entry that was to involve building a plant in Sanand.

However, most vehicle-makers see the downturn as a temporary blip and are maintaining their investment.

“Most feel that the growth will start coming again,” says Vangaal. “Even in the bad times, people are expanding the market for the future.”

The ideal solution is to have another outlet. “The domestic market takes most sales, but to utilise capacity OEMs cannot depend on it, so they have to go for export markets,” he says.

Exploiting export potential
Car exports have more than doubled in the last five years to just over half a million in the 2012/13 financial year, according to SIAM. Between April and October they increased again by 5%. The Government’s AMP plan targets $35 billion of vehicle exports by 2016, compared to $2 billion in 2006.

Cars heading to Europe from India include right-hand versions of the Dacia Duster SUV from Renault-Nissan’s Chennai plant, destined for the UK, plus B-segment Nissan Micras from the same plant and Hyundai’s A-segment i10.

Yet, in a demonstration of how important manufacturing flexibility is, Hyundai has since given the i10 European production job to its Turkey plant as strong demand in India for the new i10 has pushed the A-segment car into fifth place in the local sales chart, soaking up capacity in its Chennai plant.

Ford is planning a greater number of exports and will bring EcoSport B-segment SUVs into Europe from India from next year. It is likely that the next-generation Ka will also be exported from India. In November, Ford India’s managing director, Joginder Singh, told The Hindu Business Line newspaper that 25% of Fords are currently exported, with plans to increase that to 30%.

Meanwhile, Maruti Suzuki’s company report for 2012/13 stated that Suzuki in Japan had decided to make its Indian operations responsible for the export markets of Africa and the Middle East.

It’s not just whole cars in the frame. For example, Honda already exports transmission components from its Rajasthan factory to Europe.

Renault-Nissan boss Carlos Ghosn announced earlier this year that the Chennai factory will handle cars on Nissan’s Common Module Family (CMF) architecture from 2015. This lower-cost, CMF-A version will give Indian buyers a more sophisticated car than “a de-contented car originally intended for customers in mature markets”, he said.

Another modernising trend is a slow shift to more Western  working practices. For instance, when persuading engineers to relocate to its new R&D facility in Rohtak, Haryana, near Delhi, Maruti Suzuki agreed that personnel could work a five-day week instead of the standard six days.

One sales trend that has given hope to vehicle-makers that they can improve margins by selling more expensive cars in India is the growing popularity of SUVs and people carriers. Renault’s Duster and Ford’s EcoSport, both B-segment SUVs, as well Toyota’s Innova people carrier, all represent their manufacturer’s top-selling car. That could prove a lifeline for OEMs struggling to make money and seize market share from Maruti Suzuki.