A veteran of manufacturing in Mexico, Magna has started production at a new exteriors plant in Querétaro 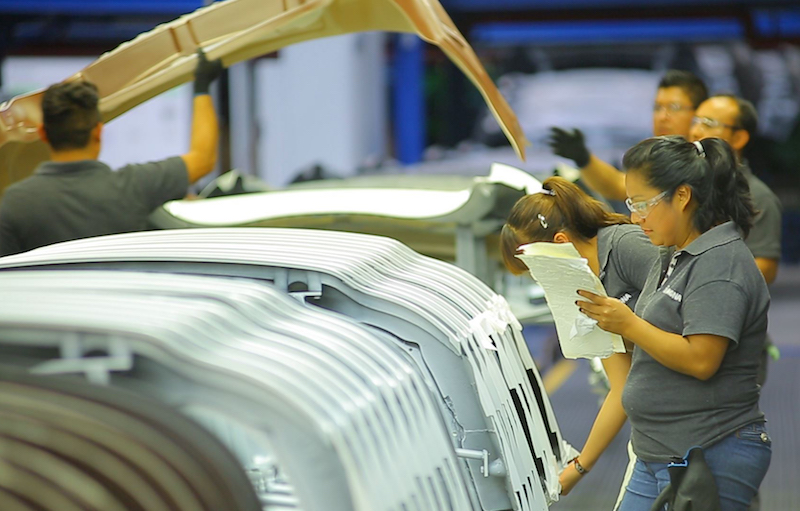 One of the latest additions to the roster of tier-one supplier facilities serving Mexico’s automotive OEM community, the new Magna Exteriors plant in Querétaro, central Mexico, started operations in July of this year. The 26,900 sq.m facility currently employs around 400 people, though this will ultimately to rise to 600, and has injection-moulding operations and a robotic paint line to supply customers with moulded and painted parts including fascias, bumpers and rocker panels. The plant represents the continuation of a lengthy involvement by Magna in Mexico. The company established its first Mexican facility in Puebla in 1991 and today has 30 manufacturing facilities there, plus an engineering and product development centre, with almost 25,000 employees across all sites.

The company’s affinity with the country is confirmed by Grahame Burrow, president of Magna Exteriors, who says that this group currently accounts for six of the sites Magna operates in Mexico. He explains that, as a supplier, Magna obviously follows the lead of the OEMs, and that the steady growth in the Mexican economy, coupled with its inclusion in the North American Free Trade Agreement (NAFTA) area, means that it will continue to be a major focus of automotive industry investment. “Mexico is a very business-friendly place for us to set up, and as long as the NAFTA agreements remain in place, we wouldn’t expect that to change,” he states.

“Mexico is a very business-friendly place for us to set up, and as long as the NAFTA agreements remain in place, we wouldn’t expect that to change”– Grahame Burrow, Magna Exteriors

The location of the new plant, about two hours’ drive north of Mexico City, was carefully selected. It is an area that is still developing economically and not yet heavily populated by automotive suppliers. “In automotive terms, it is a growing region,” Burrow confirms. Ramp-up of operations at the plant will take place during the rest of this year, following a total investment by Magna of $135m. “We expect to reach full capacity in Q1 of 2017,” he adds.

The primary production area is focused on the manufacture of “large, exterior, injection-moulded panels that are painted and assembled with various content”, explains Burrow. A key product will be bumper fascia systems, though the Exteriors president emphasises that the plant is designed not merely to handle volume expansion, but also the introduction of new product types if required. One example would be plastic liftgates, which he describes as “an emerging product for us, particularly for the SUV market”. For now, though, bumper systems will be the main product and Burrow expects volumes in the region of 2m units a year once the plant is fully operational.

The factory will support the Mexican operations of Ford and Fiat Chrysler Automobiles. Magna Querétaro will supply the former’s plant at Hermosillo, Sonora, with parts for the Ford Fusion and Lincoln MKZ, both directly on a tier-one basis and indirectly via a co-located Magna Assembly Systems (MAS) facility, which is needed because Hermosillo is 1,700km away from Querétaro. “We manage about two days of inventory there,” Burrow observes. The parts going directly to Ford are trunk-lid finishers for the Fusion and rocker panels for the MKZ. Front and rear fascias for both vehicles are assembled by MAS Hermosillo, which ships the modules in sequence to the OEM. 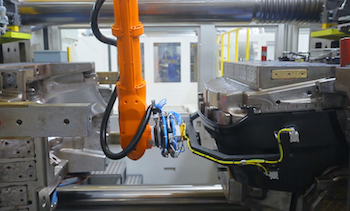 The new factory is highly robotised, even for ancillary activities

In the case of FCA Toluca, Magna Querétaro supplies the plant, only 200km distant, with three different front and rear fascias on a tier-one basis. These are for the Jeep Compass, Fiat Freemont and Dodge Journey. For both OEMs, Magna has roughly four hours from the placement of an order to deliver the relevant part to the production line.

Burrow says that, although Ford and FCA are existing customers of Magna, the new Querétaro plant represents far more than just an increase in capacity in Mexico. “It is a state-of-the-art facility that will allow us to increase both quantity and quality,” he confirms. “That will present us with new business opportunities with both these customers and other OEMs as well.” Given the number of vehicle-makers setting up or expanding manufacturing facilities in Mexico, there will be plenty of opportunities.

Minimising variation through technologyThe moulding equipment supplier for Magna Quarétaro is Kraus-Maffei, while the paintshop is from Eisenmann. The main pieces of technology are: five injection-moulding machines rated at 4,400 tons; one injection-moulding machine rated at 2,200 tons; and a fully robotic, solvent-based 1K and 2K topcoat paint line with five-stage power washer. Importantly, not only are the painting operations fully robotised but so are all the ancillary operations associated with the moulding operations: loading and unloading but also flaming and trimming procedures. This level of automation, Burrow says, militates very strongly against variation, a factor that he regards as crucial to Magna’s claim that the plant represents a benchmark in operational efficiency.

In addition, the plant has a number of other attributes aimed at maximising its energy efficiency while minimising environmental impact. These include: an adiabatic water system which reduces both electricity consumption and CO2 emissions; LEDs instead of high-intensity discharge or fluorescent lights, providing high efficiency and reduced input wattage plus the quality needed for task visibility, material characteristics and colour differentiation; extensive skylights to maximise the use of natural light; high-efficiency motors throughout the plant; high-efficiency chillers on the paint line, further reducing electricity consumption; and six solar heaters which help to cut CO2 emissions by more than 14 tons per year.

According to Burrow, the company also investigated the potential for onsite solar energy generation but, even in Mexico, was “not able to make a business case for it”.

Harnessing human powerDespite a high level of robotisation, technology does not exist in isolation from personnel, and Burrow says that the ability of the local area to provide recruits of appropriate quality was another key factor in determining the location of the plant. “Before we even broke ground on the site [in Q1 2015], we were engaged with local universities to set up relevant programmes,” he states. Now, the plant employs over 50 graduate-level engineers, many the product of the local education system, who were put through the company’s training process early so that they would be ready for the launch of the plant. Although Mexico has plenty of young talent of the sort companies like Magna are keen to recruit, the distribution is not even throughout the country; Burrow describes it as “very regional”.

Reviewing the plant’s performance just a month after operations started, Burrow asserts that it is already meeting customer expectations, not least in the key metric of paint finish quality, including colour matching to the intended vehicle bodies; so far, “there are no quality issues”. Control of the internal environmental conditions of the paint booths – temperature, humidity and down draught, for instance – is also fully automatic, something that Burrow indicates is “quite new” for the company. Otherwise, it is a standard Magna quality system. 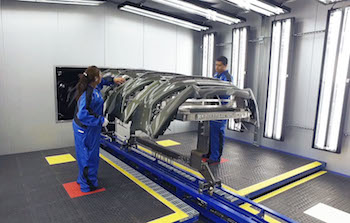 Paint finish is inspected to ensure that it meets OEM requirements

In line with the company’s normal practice, the workforce is divided into self-directed teams of ten to 14 individuals in each department. Each team has a daily meeting during which members are updated on key metrics; everyone is aware that they are responsible for their own quality. An ongoing improvement programme includes a suggestion scheme in which individuals are rewarded for ideas that bring measurable enhancements to procedures.

Although the senior management team at the plant currently features a high proportion of US expatriates, this is something that will change over time; the installation of an entirely local management team is a specific objective. “Eventually, our US people will return home,” says Burrow, adding that the likely timescale for that is “two to three years, depending on the individual”.

The plant is now operating two shifts per day, five days a week. The second of those parameters, Burrow says, is not about to change – “we have no plans to go to seven days a week working” – but the first will. “When production volumes require it, we will go to a three-shift working pattern,” he states. Moreover, Burrow confirms that there is spare land at Quarétaro to expand the facility if necessary; as such, the site will be the focus for any major expansion by Magna Exteriors in Mexico in the foreseeable future.