Established in 1930, São Caetano do Sul is the OEM’s oldest plant in South America and has required substantial modernisation, most recently receiving upgrades to its bodyshop and press shop 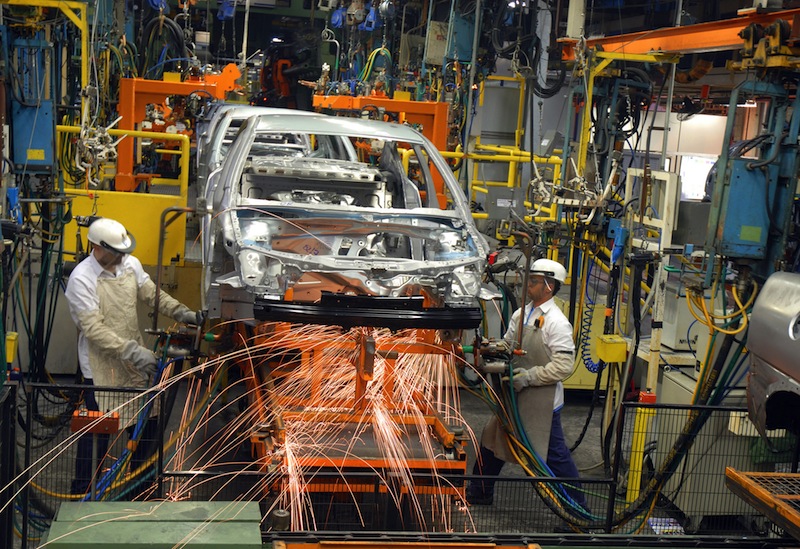 In August this year, General Motors (GM) announced a $2.9 billion investment in Brazil for the development of new products, technologies and training, plus component localisation – a move that was warmly welcomed by a government which has been pushing for more automotive production within its borders via the Inovar-Auto regime. President of GM Brazil, Santiago Chamorro, commented that this financial commitment over the next four years shows the long-term confidence GM has in the country. 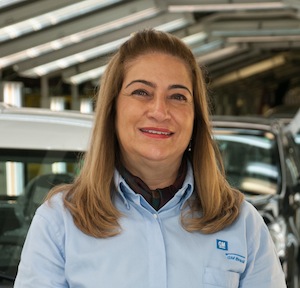 In truth, GM showed its belief in Brazil as a location for automotive production many decades ago, long before the recent wave of investment by global OEMs wanting to take a slice of an obviously burgeoning market. The OEM soon went from running a CKD operation at Ipiranga, São Paulo, in 1925 to establishing its first plant in the same region, at São Caetano do Sul – now an astonishing 84 years old.

The age of the plant presents some practical challenges for the operations of today, first and foremost because the relatively small 290,505 sq.m site, with its 254,209 sq.m constructed area, is now hemmed in by the city on all sides. Not only is the potential for expansion curtailed, but the space within the original layout is necessarily less than optimal.

As regards sustainability, it is also difficult to tackle a pre-defined environmental footprint; as plant director Sonia Campos readily admits, São Caetano do Sul “will never be like Joinville”, the new GM engine facility which became the first automotive production site in South America to receive Leadership in Energy and Environmental Design (LEED) certification. Nonetheless, a number of sustainability initiatives have been implemented to improve water recycling and energy consumption, as well as to reduce waste with the objective of acquiring landfill-free status.

From a production point of view, successive upgrades to the facilities at São Caetano do Sul, particularly in the press shop and bodyshop, have boosted its efficiency and ability to handle a broader vehicle range. According to Campos, the press shop upgrade has also generated an “impressive improvement” in quality; she adds that GM has now certified the plant to BIQ III level, a considerable achievement in that very few plants worldwide have reached level IV, and none has V.

In addition, a new 30,000 sq.m materials assembly and sequencing warehouse (MASC) is currently under construction to reduce dependency on third-party facilities. Work started on phase one in February 2013, phases two and three will be finished by the end of this year, and four and five are scheduled for completion in 2015. The warehouse will operate a lean strategy and enable São Caetano do Sul to increase material handling efficiency as well as to reduce logistical costs. The plant handles 6,200 part numbers and receives 850 trucks on a daily basis, consuming 1.1m components per day.

Campos states that São Caetano do Sul, with its workforce of 6,000 personnel, is currently working “close to maximum capacity” on three shifts, at more than 40 hours (and six days) per week. The work rate stands at 52jph. Output has increased since 2009 and hit a record 266,620 units in 2013.

In addition to being a complete automotive plant, São Caetano do Sul incorporates departments such as Product Engineering, Manufacturing Engineering, Design, and Global Purchasing and Supply Chain. As befits the OEM’s oldest plant in the country, it is also the GM Brazil headquarters.

Automatic progress
The 7,891 sq.m press shop contains 18 presses in four lines, two of which have been newly automated with extra-large Schuler equipment that has boosted output by 30%; the remaining manual equipment will be replaced by 2015. Most of the 324 employees in the press shop per shift are involved in material handling, which manager Harry Imgartchen describes as the “most important” task in the facility. The conventional line, operated by a team of ten workers in pairs, runs at 288 parts per hour, with a benchmark of 259. By contrast, each 2,000-tonne, automated line requires only four workers and a team leader, and can reach six or 6.5 hits per minute, or 380 strokes per hour, benchmarking 299.

In May, though, the efficiency of these new machines was temporarily negated by an uncontrollable external event: a strike at a subframe and axle supplier which stopped the presses for three days during the week AMS visited. But production soon resumed and, as Campos says, the problem of industrial action at suppliers “is no different from Europe”.

The press shop houses 262 dies, weighing up to 40 tonnes, for the production of 85 different panels, with over 400,000 stamped parts produced per month from around 6,500 tonnes of steel. There are 20 set-ups per day, but the recent automation has reduced the set-up time in most cases from 16.5 to 7.5 minutes. No aluminium parts are made at present, but according to Imgartchen, this will happen “in future”. Thus, the presses at São Caetano do Sul currently perform three to four operations, while at GM facilities in the US it can be as many as five.

GM Brazil is, however, supporting its northern equivalent in at least one respect: at the time of the AMS tour, the São Caetano do Sul press shop was trying out dies for the new Cruze, having built them in its own tool and die shop; the final adjustment was due to be made by GM’s North American team.

Pointing out that modern dies are “very complex” and could be classed as machines in themselves, Imgartchen emphasises the importance of ensuring “the highest level of quality” in the press shop. At São Caetano do Sul, all die maintenance is conducted in-house and the press shop is currently achieving a 98.5% no-touch rate. Its output is all sequenced to the assembly line. 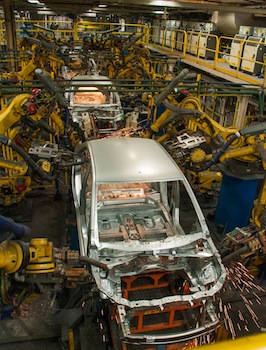 Bodily complications
Covering a total of 27,328 sq.m, the bodyshop is really formed of two plants: one for the Montana pick-up and one for the Spin, Cobalt, Cruze hatchback and Cruze notchback. An upgrade during 2011-2012 saw the introduction of these four car models as replacements for the Vectra hatchback and notchback, the Astra and the Corsa Classic.

Previously, each bodyshop line produced a single model, but a new global concept for flexibility in manufacturing means that the Cruze, Cobalt and Spin are being made on the same line. Given that space is at a premium at São Caetano do Sul, this may be just as well, but it does require a high-level of control over production; as bodyshop assistant manager Penelope Barbosa points out, it is necessary for the feeding of the buffer area to be “very efficient” or the whole line will stop. In the framing stage, this consists of 30 units suspended overhead. Since each shift produces this mix of models, the framing gates are switched multiple times per day.

The São Caetano do Sul bodyshop uses almost 300 robots, mostly from Fanuc but some from ABB. However, there is still a fair amount of manual labour and the facility accommodates 1,147 employees per shift. In Plant II, which AMS visited, the automation level for the Cobalt and Spin is 59%, while for the Cruze it is 66%; in Plant I, Montana welding is 50% automated. The facility can, however, boast what Barbosa says is the largest robot in South America: a Fanuc M-2000iA series giant. Nicknamed 'Schwarzenegger', this robot is capable of lifting a one-ton payload and is used to transfer the car bodies from frame to respot lines.

Between the bodyshop and paintshop, there is a buffer zone of 140 cars. The 29,165 sq.m paintshop is equipped with eight Fanuc and Dürr robots and a staff of 527 per shift. Manual tasks include preparatory cleaning and the application of sealant and primer; the anti-chip application and the standard basecoat and clearcoat phases are automated. The painting is performed in batches of 10-12 vehicles in order to minimise the use of solvents; with multiple models and many colours available, there is some complexity. Nonetheless, head of paintshop Renato Freitas says the facility is running at a 98.1% first-approval rate.

Meanwhile, the 17,234 sq.m assembly hall is staffed by 1,285 personnel per shift, operating in 54 teams. There are 160 stations in the facility, with a takt time of 64 seconds. The assembly process was recently improved by the introduction of a set parts system (SPS), with boxed and listed components now stationed in racks on the line. 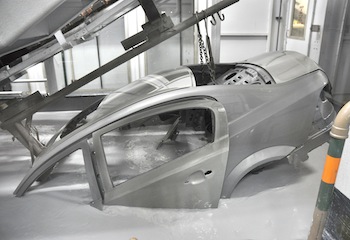 Such attention to detail bodes well for a plant which is not far off its centenary. Indeed, Campos believes in a process of continuous improvement requiring what she calls a “‘never-ending’ mindset”. While stating that the recent upgrades have driven the plant to “a highly competitive stage”, she says the team still has “a lot to do”.

Asked whether GM might one day close São Caetano do Sul and transfer production to more modern facilities like Joinville, Campos replies: “I don’t see that happening, because every year we implement new projects here…  That’s the reason that I see GM continuing to operate this plant”.

In addition to the recent establishment of new facilities, systems and equipment, the plant will continue to benefit from the flipside of its location within São Paulo: its proximity to suppliers, the Port of Santos, dealerships and the local market. Campos gives the final word: “We are integrated into the city and the city is integrated into us; most of the community work for us here. They are here because we are here.”