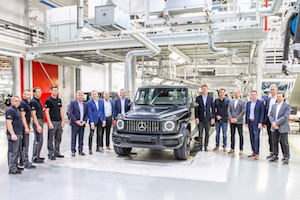 Austria - Production of the new Mercedes-Benz G-Class has begun at the Magna Steyr plant in Graz, Austria. It made its global debut at the 2018 Detroit Auto Show in January.

"With the model change the new G-Class experienced the biggest transformation in its 39 years-old history," explained Gunnar Güthenke, head of the off-road product group at Mercedes-Benz. "At the same time we have kept the familiar and popular features of the design icon and further optimised the 'G' where ride comfort and robustness are concerned. The superior development goal for the new G-Class was to improve the off road capabilities even more. For the production we continue to trust in our experienced production partner since 39 years, Magna Steyr."

The new G-Class uses the same chassis, three locking differentials and low range gearbox as its predecessor. However, it does include a range of new parts, such as a suspension that was developed between Mercedes-Benz G (a 100% subsidiary of Daimler purely responsible for the engineering and supervision of the series production of the G-class) and Mercedes-AMG (the OEM's performance vehicle arm).

In July 2017, the 300,000th G-Class rolled off production lines at the Magna Steyr facility. By the end of the year, Mercedes-Benz had sold over 22,000 units, marking the best ever yearly record for the G-Class.

Several other vehicles from different companies are also made at the plant in Graz, such as Jaguar's E-Pace and its first electric SUV the I-Pace.