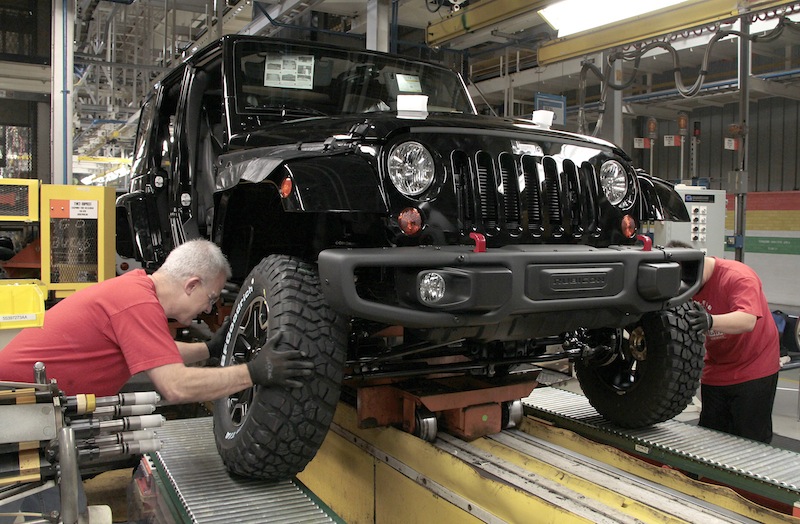 “How do you unlock the power of 5,000 people?” That is the question on the mind of plant manager Chuck Padden as he bids to turn the FCA US Toledo Complex into “the premiere manufacturing operation in the world”. In North America at least, the Ohio plant is one of the top-performing facilities, coming a close second behind Nissan Smyrna in last year’s output league table, with 511,106 units. This was more than triple the 2009 figure of 143,885 units and makes the target of 531,000 in 2015 look achievable. That sizeable workforce (actually 5,266 as of June 30) is also FCA’s biggest in North America.

People power may underlie its success, but Toledo’s step up in volume was enabled by the addition of a new, highly automated bodyshop for production of the Jeep Cherokee. In November 2011, Chrysler announced an investment of $500m in a 260,000 sq.ft bodyshop expansion, upgrades in paint and assembly, and a 26,000 sq.ft metrology centre. From June 2013, Toledo North Plant has been producing the Jeep Cherokee, making 275,518 last year. The other side of the 3.9m sq.ft Toledo Assembly Complex produces the Jeep Wrangler and Jeep Wrangler Unlimited, for which it is the exclusive production location (the Cherokee, however, is now being localised in China via the joint venture with Guangzhou, GAC Fiat). The Toledo operation is now turning out about 2,000 Jeep Cherokees and Jeep Wranglers per day. As well as being sold locally, the vehicles are exported to more than 130 markets worldwide.

As Padden explains, production is divided in this way because the Wrangler is a body-on-frame, made like a pick-up truck, whereas the Cherokee is a unibody on the same platform as the Dodge Dart and Chrysler 200, for which new bodyshops have also been built respectively at Belvidere, Illinois, and Sterling Heights, Michigan. However, all three vehicles are based on the Fiat-derived compact US-wide architecture, meaning that the bodyshops bear strong similarities and therefore offer potential for manufacturing flexibility.

Italian inspiration
One of several features which have come from Fiat, the revamped bodyshop at Toledo North follows a butterfly layout, with underbody and panel manufacture on either side of the framing operation. The old bodyshop was torn out over a period of three weeks when Jeep Liberty production ended in August 2012, after more than 11 years and nearly 1.7m vehicles.

The new design gives Toledo North the capability to produce up to four models on the same line, although Padden says there are “no current plans” to add any others to the Cherokee line. Toledo does not have a press shop, and so stampings are delivered from the Warren and Sterling Heights sites, both in Michigan.

Key features of the new bodyshop are:

The high level of automation means that the workforce (including 577 hourly employees) is now much smaller than in the days of Liberty production, when door and panel installation were performed by hand. Today, the workers mostly load components for the robots to place, measure and rivet. Developed in collaboration with Fiat, the BRIC provides a number of advantages, including rapid installation (around one hour per station) and overhead mounting, which reduces tripping hazards while improving accessibility and maintenance.

Also a result of joint Fiat-Chrysler work is the Open Gate Framer, the section where 18 robots (ten overhead, eight floor-mounted) precisely weld panels to the body to ensure a highly repeatable build. Indeed, data from the metrology centre shows that the Jeep Cherokee scored highly from launch, exceeding the target by 4% on job one. It rates at 85% for cpk (accuracy) and 98% for cp (repeatability).

“We try to treat each operator like a surgeon” – Chuck Padden, FCA

Precision is reinforced still further by the use of lasers for roof welding and closure panel installation. The laser braze welding process, widely used by Fiat, consists of a laser light beam melting a piece of silicon wire, applied by four robots, along the body side aperture and the roof panel. This creates a seamless transition between the two surfaces, eliminating the need for a secondary trim component.

On the automated closure panel installation line, each bodyshell is measured across a number of dimensional aspects, generating data which is fed into the robots for a precise fit of the liftgate, doors, fenders and bonnet panels. These measurements are also used to accurately cut the front rails of the car to length, providing a suitable mounting surface for the front-end module installed in final assembly.

Paintshop progress
The paintshop, located on two levels and staffed by 401 hourly employees, also received several adaptations for the Jeep Cherokee, though here Chrysler took the lead in at least one instance.

The key updates were:

– A rotation technique for underbody sealing and coating
– The use of bell-bell technology for base and clear coats
– The injection of sound deadening material into body cavities.

The rotation of the vehicles for the application of sound deadening and corrosion material, which is a Chrysler best practice, creates a significant ergonomic improvement for the employees, who would otherwise need to reach upwards to do their work. Meanwhile, the applicator change to bell-bell technology delivers better atomisation and aesthetic results for the finished vehicle. The paintshop at Toledo North has also generated an FCA best practice, namely a recirculated air system which is not only better for the environment but also saves $2m per year.

As for the environmental performance of the plant overall, Padden says it has the best energy use per vehicle for FCA within North America, at 5.07GJ, as well as the top score for water, at 1.62 cubic metres. Only one factory ranks better for waste per vehicle than Toledo’s 10.35kg. Furthermore, since 2011, the plant has achieved reductions in energy, water and waste of 39%, 60% and 55% respectively. However, Padden says there are currently no plans to introduce alternative power sources, owing to a lack of cost-effective options close to the plant.

Assembly adaptations
The different dimensions of the Jeep Cherokee compared with its predecessor required changes to the assembly line. With the launch of the new model, Toledo North also took the opportunity to implement best practices and technologies from across the FCA Group.

The key developments were:

– The establishment of a Work Place Integration (WPI) room
– The use of ICIDO virtual technology
– The installation of a flexible decking line. 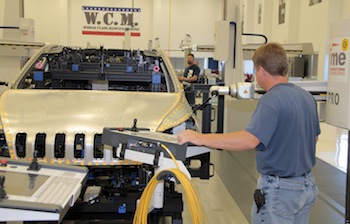 The WPI room was set up prior to the launch of the Jeep Cherokee in order to maximise progress with World Class Manufacturing (WCM); the operations at each station were reviewed, best practices identified and processes verified before any vehicle was built. Indeed, Toledo is now pushing to transform its Bronze status into Silver and is currently FCA’s top-ranked vehicle plant in the US, with a WCM score of 59; only Dundee Engine Plant in Michigan scores higher, at 60, which is matched in North America solely by Windsor Assembly Plant in Canada.

Examples of WPI at Toledo North include the introduction of ergonomic seats which enable workers to install the side airbags by sliding into the vehicle instead of standing and leaning in; plus, the ‘sweet seat’ at the aeroshield operation which gives employees a comfortable sitting position beneath the vehicle as they insert rivets. The latter has now been rolled out to Belvidere and Sterling Heights.

The development of strategies to tackle ergonomic issues was assisted by ICIDO technology which can simulate the movements of the operators at their workstations. With a view to enabling each of the assembly workers (1,988 hourly) to act precisely and efficiently “like a surgeon”, as Padden puts it, data from ICIDO was used to decide between process design changes and kitting strategies.

Kitting is much in evidence at Toledo North, with the implementation of these solutions often devised by the workers themselves under the supervision of their team leaders. Examples include the grille inserts, now stacked line-side in seven-piece sets, 12 trays high; and front suspensions, with corner modules now picked from a turntable using ergonomic arms. These improvements have reduced the number of pick-up points and steps taken by the workers, ultimately cutting time, scrap and costs.

One of the most important projects in the assembly upgrade was the installation of a flexible decking line, the first such instance at a Chrysler plant and only the fourth at Fiat. This three-level structure at the centre of the facility uses pallets to deliver components at the correct stages.

On the lower level, the built-up front and rear suspension pallets are loaded by gantry robots onto a main pallet which moves down the line, where all the other components are assembled to complete the chassis. The front suspension is delivered to the flex decking structure by a conveyor which lies ten feet underground, while the rear is transported to an alignment station by automated guided vehicles before travelling underground to the line; this arrangement was devised to accommodate the insourcing of the two suspension systems for the Jeep Cherokee. 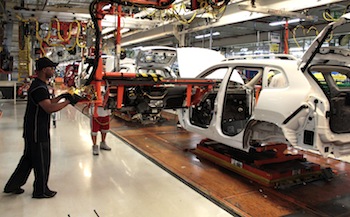 The chassis pallet then enters a lift to the second level, where it is married to the body by robots making 24 connections. Human operators complete the engine mounts at the next three stations. Before moving down the line, all connections are verified and, if necessary, corrected automatically or manually.

This efficient combination of man and machine, not just in assembly but throughout the plant, will be vital if Toledo is to pursue Padden’s mission of using WCM “to drive towards the ideal production system” and become the top manufacturing operation in the world. But the first target must be Nissan Smyrna and that number one spot in North America.