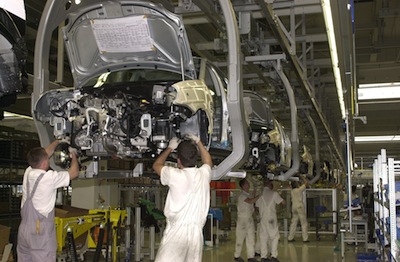 The seemingly unending expansion of the Volkswagen Group continued last year and looks likely to continue into 2014 and beyond. The company is engaged in a three-way battle with GM and Toyota for the undisputed number one spot in terms of vehicle production, and indeed has set itself the target of leading by volume by 2018, when it expects to be selling 10 million vehicles worldwide across all its brands.

We might think of Volkswagen as a German group but it has a truly global manufacturing network, with major production facilities outside Germany and indeed outside Europe – in China, Russia, Brazil and North America (USA and Mexico). It has a growing presence in India and ambitious growth plans for all its production plants worldwide.

Modular platforms for future growth
One of the most important factors underpinning Volkswagen’s current and medium-term growth plans is the transition to a series of modular platforms. The two most important platforms which the group will use are MLB (for all Audis from the A4 upwards, the VW Phaeton and the larger SUVs, all of which will have longitudinal engines) and MQB (for all vehicles between the Polo and Passat, and parallel vehicles from the other brands, ie Audi, SEAT and Skoda). MQB vehicles have transverse engines. Volkswagen has especially high hopes for this platform, which it expects to provide the underpinnings for as many as 4 million vehicles by 2016, and quite probably more after that date.

All new factories – and indeed refurbished sites – will be configured to make vehicles on these two platforms, and the scale of the investment required to launch MQB should not be underestimated. Global investment bank Morgan Stanley has suggested that the total investment for MQB could be as much as US$70 billion. With such an eye-watering cost, Volkswagen needs this strategy to work and for MQB models to be made worldwide, not just in Europe. Factories in North and South America and China especially have been, and will be, subject to major investment in this regard.

Alongside the substantial investment by Volkswagen in the MQB range, its premium and luxury brands have received their own substantial investments. Audi is at the forefront of this and is in the midst of a US$30 billion programme through to 2018. More than two-thirds of this sum is for new models and technology development, particularly electric vehicles (EVs).

Audi has almost an entire range of A-numbered vehicles, with the A1/A3/A4/A5/A6/A7/A8 and an A2 expected in due course. Meanwhile, the Q range will soon consist of Q1/Q3/Q5/Q7, with sporty versions (ie Q4/Q6/Q8) expected as well, although not all of these have been officially confirmed. In addition, the company will launch a series of EVs under the e-tron brand (similar to BMW i). Other product niches are undoubtedly under consideration; for example, Audi currently does not have vehicles which are directly comparable to the 5-series GT or 3-series GT from BMW and it would not be surprising to see such models appear in due course.

Major production developments
Volkswagen has been active in China for longer than any other international vehicle company and its operations there are run in association with major Chinese car companies, namely SAIC and FAW. One of the most recent developments in China occurred in Foshan, where a plant with an annual capacity of 300,000 opened in September last year and now produces the seventh-generation Golf.

The decision to launch the latest Golf in China at the same time as it is made in Europe is indicative of how the Chinese market is changing. While there is still a market for cheaper and older models than those made in Europe, there is also a growing market for the most up-to-date models. Chinese consumers are increasingly able to afford such vehicles and they will no longer automatically accept previous generation models. The Foshan plant represents a small part of the group’s plans to invest no less than US$13 billion in China by 2016, by which time Volkswagen wants to have increased its current 3 million annual output by 60%.

And it is not just Volkswagen brand vehicles that will be produced in greater numbers in China. In October 2013, the group opened a plant in Ningbo which will produce a mixture of Volkswagen and Skoda models, all on the MQB platform. Like Foshan, this plant will have a capacity of 300,000 units per year.

China is by no means the only recipient of investment funds from Wolfsburg.  In October 2013, the company announced a US$236m investment programme in Brazil. Just as in China, this will add the current Golf to the manufacturing line-up. As a result, capacity at Curitiba will increase by 20% to 1,000 vehicles a day.

The expansion in Brazil and China will lead to a significant increase in the company’s workforce from around 550,000 in 2013 to 600,000 by 2018, with most of this growth coming outside Europe, especially China, where as many as 100,000 people will be employed by this date.

Further expansion of production outside Europe is inevitable. Alongside China, we can expect to see growth of the group’s activities in North America. Audi is building its own plant in Mexico and we can also expect to see expansion of Volkswagen’s new US factory.

In January 2014, VW confirmed that production of a mid-sized SUV (currently known as CrossBlue) would take place at one of its American plants, most probably Chattanooga, which currently makes the North American Passat. This Tennessee facility would gain an additional 100,000 units annual capacity from 2016, giving it a total capacity of 250,000 per year. The only vehicle currently made there is the Passat. The decision to make a vehicle based on the CrossBlue concept vehicle will be part of a US$7 billion investment which the company is promising will take place up to 2016. 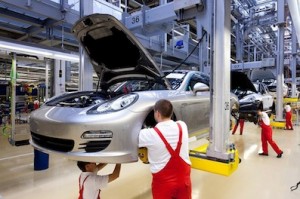 Decreasing dependence on Germany
Although most of the group’s German plants have been fully utilised in recent years and are expected to maintain close to full production rates in the years ahead, Volkswagen has shifted some production out of its home territory in order to free up capacity for new models.

For example, the next Audi Q5 will be produced in Audi’s plant which is currently under construction in Mexico. This production switch will bring Audi into line with Mercedes-Benz and BMW, which also make some of their similarly-sized or even slightly larger SUVs in North America, ie Mercedes’ M and G-class and BMW’s X3/5/6. In fact, Mercedes will add the coupe style version of the M-class, to be called MLC, while BMW will add the X4 to its North American footprint, giving a sibling to the X3 in the same way that X6 is a sporty version of X5. Intriguingly, Audi will replace the Q5 with a smaller vehicle, the Q1, at its German plant in Ingolstadt.

Meanwhile, in Hanover, unions are getting nervous about utilisation rates and future production at the light commercial vehicle (LCV) plant there. Owing to a downturn in demand across Europe and the need to maintain utilisation at Volkswagen’s LCV plant in Poland, there is reduced utilisation at Hanover – estimated at around 70% in recent industry reports.

Hanover produces the Transporter van (and various passenger-oriented derivatives, such as the Transport) and the Amarok pick-up truck. Volkswagen is the only European brand to manufacture pick-ups in Europe; Nissan produces pick-ups in Spain, making it the only Japanese producer of pick-ups in Europe. Hanover also makes the bodies for the Panamera sports sedan; this is the work which the unions are most worried about, because they fear that manufacturing will switch at the next model change to the Porsche plant in Leipzig, following extensive modernisation and expansion of capabilities there. 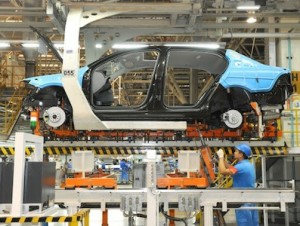 Multi-brand plants
In Europe, one of the most intriguing trends within the group has been the production of one brand’s models in a plant which has traditionally been identified solely with another group brand. For example, owing to capacity shortages in Germany, Audi decided to make its Q3 SUV at the SEAT plant in Barcelona, which needed the additional work. More recently, Skoda’s Kvasiny plant in the Czech Republic launched its Rapid compact model – and launched the SEAT Toledo at the same time.  In December 2013, reports emerged that if the go-ahead is given for a small SEAT SUV, then this too would be made at a Skoda plant, alongside the Skoda equivalent.