The lightweighting of electric vehicle (EV) structures is a key element in helping to extend the endurance ranges necessary to accelerate their increasing adoption. A specific target for weight reduction is the compartment used to house the batteries 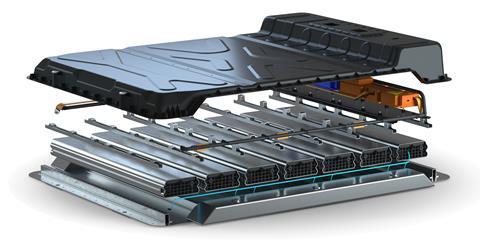 The requirement to both support the weight of the batteries and protect them has so far tended to make these enclosures heavy elements in their own right. Now, though, several research initiatives are looking to mitigate that situation through the use of new lighter weight material applications.

At research organisation the Fraunhofer Institute for Structural Durability and System Reliability in Darmstadt, Germany, a newly completed project has developed a lightweight battery housing made from continuous fibre-reinforced thermoplastics (CFRTP) using an innovative foam injection moulding process.* The structure uses two CFRTP layers with an intervening foam layer and is claimed to provide a weight saving of up to 40% compared to an aluminium counterpart.

Sandwich architecture
The details are confirmed by Dr Felix Weidmann, who led the project. “The construction is based on sandwich architecture, which aims to achieve very high mechanical properties at low weight. This is a classical way to follow a lightweight design approach in components and can be found in many applications,” he states. “Until now this has been very expensive, but our new material and process approach is much more competitive in cost-sensitive applications.”

In the manufacturing process the outer layers are first formed from a cross-ply unidirectional (UD) tape lay-up procedure. The necessary consolidation process is achieved using double belt presses which Dr Weidmann describes as “the most cost-efficient way to manufacture thermoplastic composite laminates.” They are then ‘3D preformed’ in a procedure involving laser cutting and localised thermoforming that only introduces a heating and cooling cycle to those parts of the structure that need to bend to achieve the required shape. “The cut-outs and their specific contour enable a folding into the 3D preforms, similar to a packing case/carton,” explains Dr Weidmann.

Moreover, says Dr Weidmann, this ‘thermobending’ technique avoids a more generalised alteration of the crystalline properties of the material, which might otherwise cause problems during the actual battery housing manufacturing process. “We introduce a thermal cycle locally just where we need to bend the contour to achieve the 3D preform,” he notes.

The outer layers are then mated with the foam layer in an injection moulding process that bonds them together to create the load-bearing capacity. “This is basically a fusion bonding process of polymer interfaces,” notes Dr Weidmann. “The temperature of mould and material during processing is defined in a way that enables strong bonding between the foam core and composite face sheets.” He says that the required injection pressure is very low and that the injection of the foam core takes about five seconds. At present the required cooling time before the workpiece can be removed from mould is close to 120 seconds but Dr Weidmann is confident that much shorter times can be achieved.

But though sandwich-type material formulations are already a well-established means of achieving a combination of light weight and high strength, Dr Weidmann says that this project still boasts a number of innovative features. “This process of in-situ CFRTP sandwich moulding is very new within the field of thermoplastic composite hybrid injection moulding technologies,” he states. “But we are the only ones worldwide to have pushed it to such a large and technologically demanding 3D structure as a battery casing.”

Watch the process from Fraunhofer here:

A particular issue that had to be tackled involved the prediction of shrinkage and warpage of the sandwich structures as well as the critical bonding development between foam core and composite facesheets. As Dr Weidmann notes “no commercially available simulation solution exists.” The project did, however, successfully validate appropriate simulations for shrinkage and warpage and also for bonding behaviour in the latter case using a new methodology developed by Dr Weidmann himself.

As such Dr Weidmann is confident that the resulting material and process combination offers an attractive mix of capabilities. “It does not require any metal for structural reasons,” he states. “It is a battery structure entirely made of polymers and composites that can contain any battery shape.” He adds that apart from light weight, cost-efficiency and electrical non-conductivity the development facilitates a freedom of design encompassing both geometry and material choice to support “almost any application requirement including very strong flame resistance.”

The project involved the development of battery housings for a plug-in electric vehicle and a fully electric bus with OEM involvement, respectively, from Fiat and Iveco, but Dr Weidmann indicates there has already been encouraging feedback from wider industry. Moreover, he says that the technology is not limited to battery structures, but is applicable to any component that demands cost-efficient lightweight design.

At Lorenz Kunststofftechnik chief operating officer Peter Ooms says that the project used an epoxy hardener from Evonik to develop a new SMC with a density between 1.5-1.7gm/cm³. “It has outstanding properties such as a bending strength of greater than 350MPa, a flexural modulus of elasticity of greater than 18,500MPa and an impact resistance of greater than 150kJ/m2,” he reports. “In addition, by using an epoxy resin instead of the usual polyester resin, it was possible to eliminate other problems that normally arise in working with glass fibre-reinforced SMC materials.”

Ooms says that thermal performance is also impressive. “The material can withstand ten minutes at 800°C without burning through and its insulating properties protect surrounding components and materials from temperatures over 300°C. In addition, by using an epoxy resin instead of the usual polyester resin, it was possible to eliminate other problems that normally arise in working with glass fibre-reinforced SMC materials.”

But Ooms also identifies three particular innovations in the new development. “The first is that the raw material has a long shelf life of the months under normal temperature conditions of 20°C,” he states. “The second is that a release agent is integrated into the material so that the material does not stick to the mould. The third is that any customer working today with classical or high-tech SMCs can use the material without changing their process.”

According to Ooms further work is targeting the development of a completely composite structure, but he confirms that the new product is already attracting interest from the automotive industry. “There is commitment from several car manufacturers already,” he states. 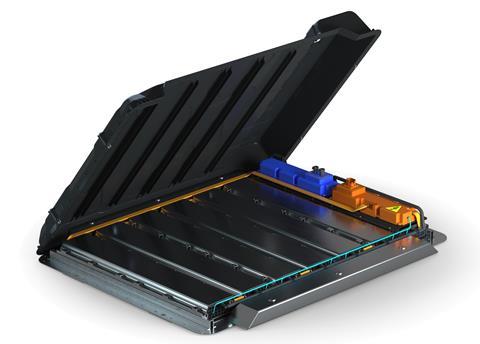 A consortium of companies has developed a battery housing utilising a glassfibre reinforced SMC mounted on an aluminium baseplate, said to achieve a weight saving of 10% over commonly used material combinations

Lightweight laminate
Meanwhile in the UK, Stalcom Automotive Technologies in Pershore has introduced a new lightweight laminated EV battery baseplate technology provisionally called Lightweight Laminate that combines aluminium with a polypropylene composite to create what it describes as “a non-homogeneous hybrid exploiting the best properties of both materials.” The product uses layers of a CFRTP material manufactured by German company Huesker Synthetic that are joined using the adhesive-free PowderBond process from UK company Powdertech Surface Science that is claimed to offer bond strengths up to three times those achievable by adhesive-based counterparts.

According to Bob Mustard, managing director of Stalcom, a key element of the product is the use of that joining technology, which was specifically developed by Powdertech to tackle issues concerned with bonding thermoplastic materials to metals. “It is a breakthrough process for joining metal to polypropylene that is simple, quick and clean,” he states.

Mustard says that the manufacturing process starts with the pre-cutting and forming if required of the composite and aluminium layers to which the bonding coating has already been applied and the insertion into the aluminium of mechanical fixings. The aluminium sheet is then heat-fused to the polypropylene composite in a short cycle time compression moulding process with the resulting assembly ready to use straight out of the mould. He adds that tooling technologies and cycle times can be varied to suit low, medium or high volumes with only minor process changes. “Once cooled and removed from the tool the resulting assembly can require little or no post processing prior to use,” he states.

Because of the different coefficients of thermal expansion of the composite and aluminium Mustard does concede that the design, tooling and processing need to accommodate this to avoid downstream issues. Nevertheless, he is emphatic that the basic manufacturing process is entirely straightforward. “The materials are assembled and formed in a conventional compression moulding process,” he confirms.

“The top and bottom layers are usually insulating composite for safety-related reasons with the intermediate aluminium layers providing an earthed layer for EMC shielding and earth safety,” Mustard states. “To date three-layer and five-layer designs have been built and tested with the five-layer design having two separate conductive layers offering interconnection possibilities akin to a multi-layer PCB.”

Mustard can enumerate a series of performance advantages for the material over monolithic composites or homogeneous metals for EV battery enclosures and baseplates. These include: failsafe internal bonding between layers; very high puncture resistance; improved thermal insulation compared to an all-aluminium baseplate with a reduction of 60°C in the internal peak temperature; and ease of disassembly of the final laminate to facilitate material reuse and recycling.

The material technology has, in fact, already been specified by niche UK car maker the Watt Electric Vehicle Company for use in the platform for its forthcoming Coupe sportscar with customer deliveries planned for the first quarter of next year. “It forms the baseplate of the battery and is fully integrated into the chassis in a ‘cell to chassis’ design,” states Mustard. “This will be one of the first vehicles to demonstrate the concept in which the chassis is the battery box.”