While most blue-light conversions are farmed out to contractors, a dedicated area at Vauxhall Luton transforms vehicles from the production line in readiness for the frontline

Converting vans or cars for specific applications is potentially a very profitable niche business for those involved. Generally speaking, vehicle manufacturers find that carrying out application-specific conversions on the main vehicle assembly line is problematic, as the extra work required can disrupt normal assembly line speeds. To handle conversions, a network of independent specialist contractors has developed in most major markets, especially in France, Germany and the UK. However, in a dedicated area of the Vauxhall Luton factory, UK, vans produced there, along with vehicles made at other Opel/Vauxhall plants, are converted for police and other specific applications.

Two sets of conversion work take place at Luton: first ‘blue light’ conversions for the UK police, with a small amount of work also carried out for the ambulance and fire services; and second, customer-specific conversions of vans made in Luton.

The blue-light facility covers just over 3,700 sq.m. and employs 30 people on the shopfloor. It works on a single shift basis and most of the vehicles are converted on a 12-station line. This can convert more than ten vans or cars per day, up to a maximum of 60 vehicles a week, for police purposes; however, the actual number of vehicles processed is typically less than this, allowing for the different specifications and variability involved. The maximum annual volume is 2,500 vehicles.

A police Astra can be converted from civilian specification in a day, but converting a Vivaro van to riot-squad specification can take up 350 man hours, including the construction of a single prisoner cell at the back.

Vehicles are pushed from station to station, with each work-step on the line lasting up to 20 minutes. Where the work required takes longer, or indeed just involves one or two processes, then vehicles are placed in bays to the side of the 12-station line. A third area, which is heated and brightly lit, is dedicated to applying the bright yellow reflector decals (supplied by 3M) that police or other emergency vehicles typically sport. This area needs to be heated so that the vehicle body is at the optimum temperature for applying the decals, preventing bubbling and ensuring a smooth finish.

Conversion work at Luton mainly supplies the UK police, with a small amount of work carried out for ambulance, fire services and other bespoke jobs

The 12-station main line starts with de-trimming stages where parts fitted on the standard assembly line that are not required, or which obstruct conversion, are removed. Anything that must be re-fitted is placed in a box, which accompanies the car or van as it proceeds along the line. The components removed from the factory-built vehicle are labelled, boxed and stored, so that when the vehicle comes off police duty it can be converted back to a civilian specification vehicle with the original parts refitted. In fact, the contracts with the police call for decommissioned cars to come back to Luton to be rebuilt as civilian vehicles and then sold through Vauxhall’s approved used car network.

The battery is also disconnected at the head of the line to allow the dedicated lighting, wiring and switch gear to be fitted. Police vehicles have different light configurations, fitted depending on the specific requirements of the service concerned. There is no standard specification across urban and rural patrol cars and vans. That said, all vehicles will have 4G WiFi and a ‘Toughbook’ tablet (which are waterproof and come with a rugged, rubberised frame for protection) to allow officers to remain connected at all times.

On patrolPatrol cars involve a number of interesting work stages to get them ready for use. For example, the rear window winders are disabled to prevent prisoners trying to escape. Similarly, the head rests are fixed – non-removable and indeed non-movable. This is to prevent their being removed by a prisoner and brandished as a weapon. On estate cars, steel load guards are fitted to prevent anything in the boot, whether equipment or a police dog, being thrown into the main passenger compartment after sharp braking.

Police cars are also supplied with a spare alloy wheel, rather than a space saver wheel, so that in the event of a puncture, with the replacement wheel fitted, the car can be driven as a normal police car. To simplify some of the work at Luton, some parts are left off the assembly in Ellesmere Port – so Astras arrive at Luton without consumer-specification radios and speakers 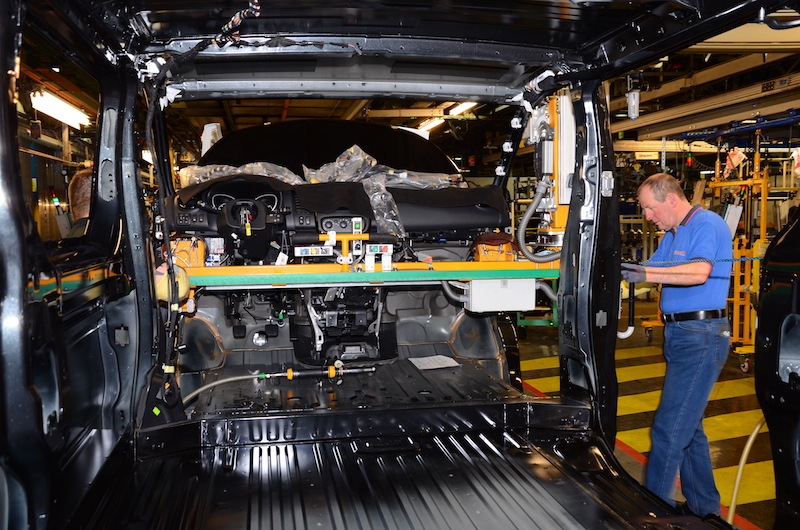 Local sourcingVauxhall has made a specific point of sourcing as much as possible of the police vehicle equipment in the UK, especially the lights, decals, wiring harnesses and bracketry. Some of this comes from suppliers very close to the plant, including Border Engineering in Luton, which makes brackets, and AV Engineering in Royston which supplies fascia mouldings.

At the moment, almost all the work carried out in the blue light facility is for various UK police services, but a small number of vans have also be prepared for the Gardaí in Ireland. Police work accounts for around 85% of the vehicles processed here, with 10% for the fire service, mainly Luton-made Vivaros and the larger Movano vans; and the remaining 5% is for paramedic vehicles, mainly Astra estates, but the work carried out here focuses on lighting, wiring, communications equipment and fitting decals.

Medical equipment, such as defibrillators, will be handled and fitted by suppliers nominated by the ambulance service involved. In total, around two-thirds of the vehicles processed here are Luton-made Vivaros and Astras from Ellesmere Port. In addition, Corsas from Spain, Combos from Turkey, Zafiras and Insignias from Germany, Mokkas from Spain or Korea, and Movanos from France are also worked on here. 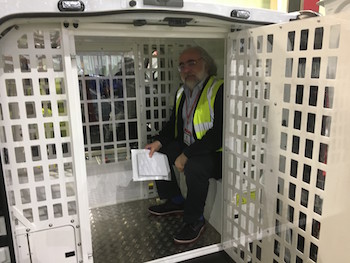 Our correspondent enjoys a prisoner's-eye view

Van unitAt the opposite end of the building in which the police vehicles are converted is the VCC (Van Conversion Centre), which focuses on adapting Vivaros to specific customer needs. Like the police car unit, VCC is unique to the Opel/Vauxhall network, with no other plant having an in-factory conversion centre. In the VCC, which covers around 2,600 sq.m. and employs around 40 people, all the work is done in static bays. The unit has annual capacity of more than 14,000 vehicles a year, on a two-shift basis. At its maximum, and if the work is all relatively simple and consistent from one vehicle to another, the facility could process up to 100 vehicles a day, a vast increase on the 12 a day it could handle in 2014. In practice the normal level is around 70-75 a day.

As with the police car unit, work in VCC focuses on fitting parts that cannot be fitted on the main assembly line without disrupting the normal work flow. Typically, work here involves fitting plywood lining or metal racking to the inside, additional lights, dashboard-mounted cameras, extra locks and similar parts. Specialist racking and storage systems from Sortimo in Italy and ‘captain chair’ seats and tables from Snoeks in the Netherlands are offered as part of a value-adding process. All this work used to be carried out away from the factory by independent contractors, but in 2010 Vauxhall brought this work in-house, although the unit was run by a third party, Autologic, with Vauxhall taking over the running of the unit in 2014. Customers now get a Vauxhall guarantee and warranty for the converted van, whereas in the past there was always something of a grey area as to who was responsible if something went wrong with a converted vehicle.