A long-time manufacturer of pick-up trucks in Mexico, Toyota will finally add car production in 2019. Its new plant in Guanajuato will be the first that is designed to make vehicles on the Toyota New Global Architecture 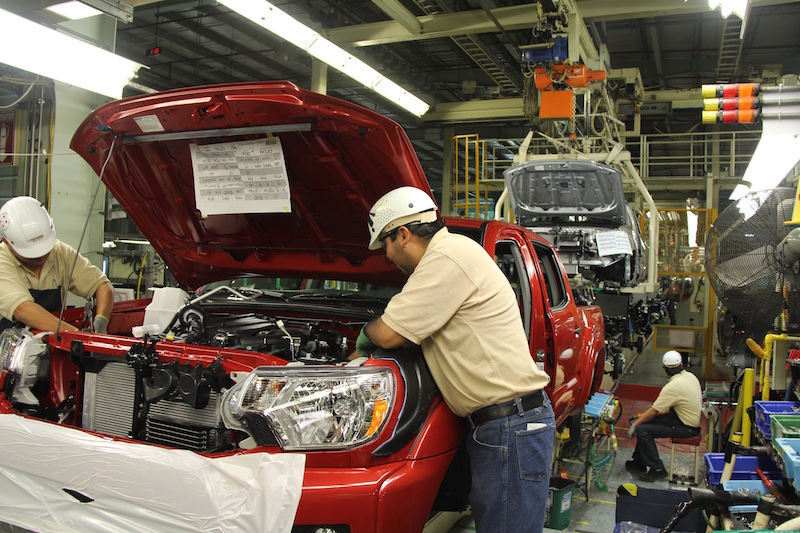 Toyota Motor Manufacturing de Baja California (TMMBC) has been assembling vehicles for North American markets at Tijuana, on the border with the US, since 2004, following a start-up investment of $140m. This plant acts as a sister facility to the OEM’s site at San Antonio, Texas, which also makes the Tacoma pick-up truck but, unlike TMMBC, also has a stamping operation. The factory in Baja California sits on more than 2.8m sq.m of land, with the Tacoma plant taking up 33,000 sq.m. There are facilities for welding, painting and assembly, plus an adjacent supplier park. Various increases in capacity have been part of additional investments to the site which now total $180m. Employment, too, has risen steadily and the workforce currently exceeds 1,180 personnel.

The Tacoma is the sole product for TMMBC. The second generation of this body-on-frame pick-up entered production in 2015, the previous model having been built for 11 years. Engines are imported from the US and the vehicle itself was primarily developed by an engineering team at the Toyota Technical Center (TTC) in Ann Arbor, Michigan. Starting with the frame, TTC engineers added high-strength steel to enhance the rigidity and overall strength. Ultra-high-strength steel was integrated into the body shell using a new hot-stamping process which reduces weight.

TMMBC makes up to 89,000 Tacoma pick-up trucks per year

TMMBC can now produce up to 89,000 Tacomas each year. This has risen from an initial 30,000 units, with the first boost bringing the volume up to 50,000 per annum in 2006 and several other increases taking place at later stages. A third shift was added in April 2015, allowing capacity to reach its present level. In addition, the plant manufactures 200,000 pick-up beds every year, and this volume has also grown in recent years to meet demand from the US; last year, 93% of Tacoma output was shipped to Mexico’s northern neighbour. The Tijuana factory supplements production of the same model at Toyota Motor Manufacturing Texas (TMMTX).

TMMTX and TMMBC work in close partnership, with the Mexican plant able to quickly assemble more vehicles to meet rising demand throughout 2016. By the end of July, Toyota Motor Sales USA had delivered 111,615 Tacomas, making this the brand’s second-bestselling light truck, ahead of the Highlander SUV and Tundra full-size pick-up. The only other Toyotas to outsell it were the Camry, Corolla and RAV4.

Toyota executives want to be sure that infrastructure issues will not obstruct any further rise in Tacoma and pick-up bed build. To this end, the upgrade of the Tijuana-Tecate railway line is one project that the state of Baja California has been acting to facilitate. The majority of parts from TMMTX heading south across the international border are sent by rail, which is unusual for Toyota in North America; rail freight in the US tends not to synchronise with Toyota’s strict route scheduling. Tacomas built in Tijuana reach the US by train, as do more than 100,000 pick-up beds sent annually from TMMBC to San Antonio.

Celaya will be the first factory designed to produce TNGA vehicles and will be 40% smaller than other plants. The environmental impact will be halved

Finally, Toyota announced the location of its first car manufacturing facility in Mexico last year, along with a few initial facts. The factory is being established at Celaya, Guanajuato, on a greenfield site and will build the next-generation Corolla sedan, with capacity for 200,000 cars per annum. Most production will be for the US, with the lead plant in North America being at Blue Springs, Mississippi.

The decision to go ahead with a car plant in Mexico was a long time coming. Having suffered badly with large-scale excess capacity in the US during the last recession, Toyota waited a long time before giving the green light for Celaya. Announcing the change of strategy, president Akio Toyoda, said: “This investment represents our long-held principles of continuous improvement and challenging ourselves to always do better. An increase in production does not mean an undisciplined pursuit of ‘more’. Toyota’s expansion must be driven by providing ever-better cars… These investments will be an important test of Toyota’s resolve and a measure of tangible improvement.” 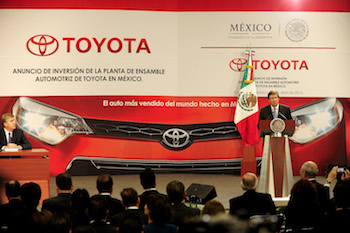 Factoring in a new architectureBy the time Celaya comes on stream in 2019, many other vehicles featuring the Toyota New Global Architecture (TNGA) will already be in production. Yet this will be the first plant designed to maximise the manufacturing benefits of this system. According to Toyota, all components now in development for the Corolla are being specified with light weight and compact packaging as top priorities.

It is important to underline that TNGA is not merely a platform but also a way of manufacturing cars. Apart from the company’s rear-wheel drive and/or body-on-frame models, most future Toyota and Lexus vehicles will be based upon a version of the TNGA. Such cars, crossovers and SUVs will be built in factories that will have seen substantial changes to lower costs and simplify the production in line with the TNGA system.

Suppliers, for example, have been told that the line assembling the Corolla will be mounted on the floor instead of being suspended from above. This is one of the strategies that will enable Celaya to have 40% less floor space than most existing Toyota car plants. The other advantage of not having an overhead line will be the ease and speed of adjustment for the addition of new models or body styles. The overall investment saving resulting from the new design of the Mexican facility is also said to be in the region of 40%. The target for CO2 emissions is especially ambitious; the environmental impact of the site is expected to be at least 50% lower than other Toyota manufacturing facilities.

The main reason for the development of the TNGA lies in Toyota’s growth in recent years. The company has added so many models during the last decade that its system of designing cars has needed a new way to find cost savings; until now, the chief engineer appointed to lead each new vehicle programme always wanted the platform and powertrain to be either bespoke or at least significantly different from what went before. Now, the head of each new programme selects from a wide range of TNGA modules.

The issue of how to maximise the sharing of parts across multiple, superficially incompatible models has been factored into the system. For example, a sports coupe and a tall SUV have different mounting points for their seats, steering column and pedals. With the TNGA, these can be at any one of five different heights, so the same basic components can be used. Toyota anticipates savings of as much as 20% from reduced model development costs, taking into account both component design and manpower.

Looking into the future at CelayaThe site where Toyota’s new plant is to be built covers an area of 6m sq.m, so there is clearly much room for future expansion. The company has bought the land from the state government and construction is scheduled to commence in 2017. The foundation stone for the nearby, $63m supplier park was laid in January this year by Miguel Marquez, the governor of Guanajuato, and state officials claim that more than 8,000 jobs will be created by the arrival of Toyota and the 25-35 suppliers following it to Celaya. Construction at the 2.9m sq.m industrial park is now underway.

The 12th-generation Corolla is presently under development and due for its first release in Japan, in 2018, followed by the US for the 2020 model year. Meanwhile, the 690A series Prius, released globally in 2015/2016 was the first model for the TNGA-C, the compact version of the architecture. Among the claimed improvements is a 60% increase in body torsional rigidity compared with the previous 590L model. Toyota says this is due to its use of laser screw welding combined with additional weld points, more high-tensile steel (19% instead of the previous 3%), plus uniquely shaped frame structures and structural adhesives.

The Corolla is the only model so far named for Celaya but others will surely follow. The most likely first addition would be a plug-in hybrid Corolla; this model is already confirmed as being under development. At some point, Toyota will likely begin Prius production in North America too, so its newest plant would be the logical place to make that model. Furthermore, should the C-HR compact crossover prove to be a success in North America, its successor, due in around 2023, would be another candidate for Toyota’s developing car production in Mexico.