A closed loop for plastics in the automotive industry has so far been a distant dream, as an unmanageable variety of mixed materials makes recycling them into new high-quality materials unviable. Fortunately, there are some promising new approaches on the horizon.

Around 150 different types of plastics are used in car manufacturing and they account for between ten and 20 percent of the total weight of a car. That figure continues to rise, as increasingly sophisticated materials are making lightweight construction affordable. According to the German Association of the Plastics Converters, 100kg of plastic can replace up to 300kg of other material. Lightweight vehicles are good for the environment because they have lower emissions, but when they are difficult or impossible to recycle because of the complex mixed materials, that gain can end up being a lot less significant. 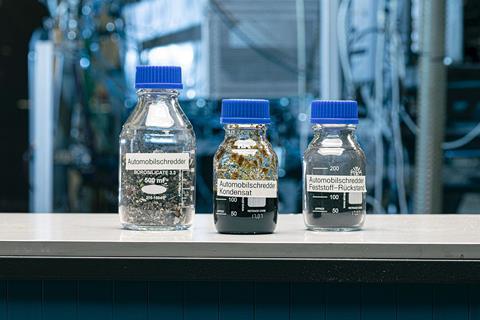 Closed loops for metals have been around for a few years already, but that is not the case with plastics. That might be about to change, however. The method of choice is chemical processing (as opposed to mechanical recycling for pure plastics). This process uses chemicals  to break down the plastic back at high temperatures, into its raw materials to end up with a base for new production that meet the high quality demands of OEMs. In this process, pyrolysis oil in particular is extracted from old plastic components such as door panels, wheel arch liners or radiator grilles, from which new plastics can be produced again in the same way as with crude oil – without any loss of quality.

According to Paul Mayhew, chairman of the European Plastics Recycling Branch (EPRB) and general manager at MBA Polymers, it’s feasible for 25% of thermoplastics in vehicle construction to be recyclable by 2025. By 2030 that could rise to 30%, and to 35% in 2035. These are not just best case scenarios, they are quite realistic, Mayhew emphasises.

These advancements are mainly thanks to new research efforts by both researchers and the industry, often in cooperation, such as with the Karlsruhe Institute of Technology (KIT) and Audi. Here, too, chemical recycling is seen as the key to converting mixed plastic waste, such as that produced in the automotive industry, back into products of the same quality as if they were made with ‘virgin’ plastics. Together with Audi, KIT researchers from the Industrial Resource Strategies think tank are working on a pilot project to implement plastic closed loops that are as resource-efficient and cost-effective as possible.

“We want to establish smart circular systems in our supply chains and make efficient use of resources,” says Marco Philippi, senior director procurement strategy at Audi, “Chemical recycling has great potential for this: If plastic components can be produced from pyrolysis oil instead of petroleum, it would be possible to significantly increase the proportion of sustainably manufactured components in automobiles. In the long run, this method can also play a role in end-of-life vehicle recycling.”

To study how this process can be implemented in an energy-efficient way on an industrial scale, Audi and KIT have launched a pilot in Karlsruhe plant for the next few years. It takes plastic components that are no longer needed from cars returning from the German dealership network and uses them to trial new chemical processes.

The extent to which the process can be established in a reasonably energy-efficient manner on an industrial scale will be shown by the Karlsruhe pilot plant over the course of the next few years. Automotive plastics recycling is still in its infancy, but the first steps have been taken, and they are promising.