It is impossible to overestimate the importance of China to global carmakers. Growth in the country has continued unabated, with total vehicle sales hitting 20m

It’s only going to get bigger. Global analyst IHS Automotive forecasts production within China to reach 30m by 2020, up from 22m vehicles last year, and the car companies agree. Explaining its bullish stance on China, PSA Peugeot-Citroën states that its middle-class target market currently accounts for 25% of China’s 1.3 billion population and will swell to 40% by 2020.

Partly to avoid import taxes running at 25%, most carmakers are already building in China – and planning on increasing volumes. Under a 2011 plan, Ford said it would invest $5 billion in the country to expand the number of its manufacturing plants from four to nine, with capacity expected to reach 1.2m by 2015 – double that of 2012.

Meanwhile, Volkswagen announced last year that it has plans for seven new plants by 2018 to push capacity from 2.6m to just over 4m, at a predicted cost of €18 billion ($25 billion). This will push the employee count up by 25,000 to an astonishing 100,000, a figure that becomes less surprising when you realise that China is the company’s biggest market, with profits from its joint venture companies totalling €4.3 billion last year, according to its recently published annual report.

VW’s biggest rival for volume in the country, General Motors, plans to add four new plants in China with a capacity to make 5m vehicles within the next two years, Reuters reported last year.

Complex connections
Business relationships in China are as complicated as ever. Automotive manufacturers are obliged to form a joint venture with a local company that can be no more than 50% foreign-owned. This is not a simple contract-manufacturing affair but an involved affiliation that sees a handful of state-owned Chinese firms deeply embedded into the structure of two, three or more global carmakers, each to the tune of millions if not billions of dollars.

Meanwhile, Toyota is partnered with First Automobile Works (FAW) in Tianjin and Chengdu. FAW is more famous for its partnership with VW, which has an even bigger joint venture with Shanghai Automotive Industry Corporation (SAIC), the company famous for resurrecting Britain’s MG brand. SAIC’s successful collaboration with GM, making minivans under the Wuling brand, has seen it become the world’s eighth largest vehicle-maker.

A tightrope of tact
Foreign carmakers with more than one joint venture have to manage the intense rivalry between Chinese partners – and that requires a delicate balance, according to IHS local analyst Boni Sa. Toyota’s recent launch of the Corolla compact car is one example. “The original Corolla is produced by FAW, its other partner GAC wants a similar vehicle so they have to launch another one,” he says. “The solution was: FAW received a version of Europe’s specification Corolla (badged Auris), GAC has got the US design.”

Doling out brands is also a minefield. Sa says Shanghai VW is unhappy that FAW VW Audi is the real profit-maker in the VW Group stable, although he adds that the companies mostly co-operate. “After 10-15 years the OEMs have found a way to balance their two partners,” he states.

The government gets involved too, granting manufacturing licences in return for bigger companies to swallow up some of the 60 or so smaller vehicle companies dotted across China. FAW VW received permission to build its new plant at Foshan after buying a local light bus-maker, Zhejiang Three Star Automobile. In 2012, Ford and its partner Changan were permitted to build a new plant in Hangzhou, having purchased a local light truck-maker, Camellia Automobile.

According to Sa, the government was probably also behind FAW VW’s decision to set up a recently completed SKD factory in Urumqi, building kits of its big-selling Santana saloon.“Plant capacity rate for Chinese brands is low. Wuling is the only Chinese manufacturer building new plants” – Boni Sa, IHS local analystBut mostly the drive to build factories away from the coastal regions is coming from the lure of greater sales, rather than state incentives. “Demand for new vehicles is the most important motivation to build plants in the west,” Sa says. He predicts that Hyundai and its partner Beijing Automotive Group will expand west from a current production base in the capital city and head to Chongqing, already the site of two assembly plants each for Changan Ford and Changan Suzuki. “Global automakers need capacity to maintain growth,” Sa adds.

Foreign manufacturers are managing to appeal to the less affluent Chinese living away from the richer coastal regions because they have now developed budget cars to wean buyers off cheaper domestic brands, according to Sa.

The market share of independent Chinese makers such as Geely and Great Wall fell last year to 40% according to CAAM, and in the first two months of this year that share has fallen again. Cars like VW’s Lavida saloon (China’s best-selling car in 2013) and GM’s Buick Excelle (second-placed), hit the market sweetspot of a spacious but compact saloon with near-premium appeal, built domestically using locally sourced parts to reduce the cost and compete head-on with Chinese brands. Domestic manufacturers have been hit hard. “Plant capacity rate for Chinese brands is low,” explains Sa. “Wuling is the only Chinese manufacturer building new plants.”

At the foreign OEMs, plants can link to a sophisticated network of parts supply that mixes local Chinese companies with big-name global players, which are not under any obligation to acquire a domestic partner like carmakers. “There are parts that Chinese suppliers take more of a share of than global suppliers,” says Sa. “However, they’re likely to be more low-tech, such as body parts.” This will change as companies invest more in research and development and also buy up Western part makers, according to Sa. For example, China’s largest parts supplier, Wanxiang Group, snapped up the bankrupt US automotive battery maker A123 Systems in 2012, beating a bid from Johnson Controls.

As the car companies expand away from established coastal automotive hubs in Beijing, Shanghai and Guangzhou, they are drawing parts suppliers with them. When Fiat set up its factory with GAC in Changsha in 2012, it built a 130-acre supplier park on site for companies such as Johnson, Denso, Cosma and Magneti Marelli. Thus, when the compact Viaggio saloon was launched its local parts content was 85%, according to Fiat statistics. 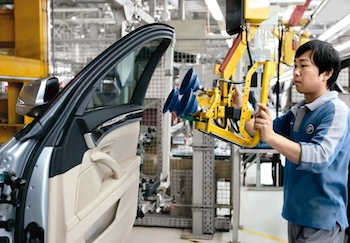 The 75% automation in the bodyshop at Fiat’s facility shows that the latest Chinese plants are heading towards Western levels. BMW’s second plant with partner Brilliance in Shenyang actually takes the bodyshop automation to 96%. This facility cost €1 billion to build and houses all aspects of ground-up assembly for the X1 SUV under one roof.

Both BMW and Mercedes have recently built engine plants in China. The Mercedes facility is the company’s first engine site outside Germany and underscores the importance of the premium market in China. Mercedes’ partnership with the Beijing Automotive Group will expand to tip production over 200,000 units by 2015, the company said last year, while BMW will eventually have the capability to produce 300,000 from its two plants, mainly stretched versions of the 5-Series and 3-Series.

Audi is also fast rising in China, and in 2012 was the biggest-seller of the three German brands, with 30% of the luxury market. Jaguar Land Rover too is doing extremely well, to the point that last year financial analyst Bernstein said the company was making the “lion’s share” of its profits in China, largely due to unexpected demand for the Range Rover and Range Rover Sport. The Tata-owned manufacturer is currently building a factory in China with partner Chery, with production due to start in 2015. Land Rover’s success comes off the back of rising SUV sales, which in 2013 were up almost 50% on the year before at just under 3m units. It is this growth that has given hope to makers like Ford and new entrant Renault that they can build serious sales in the country.

Economic power, political play-making
However, the future is not all rosy for carmakers in China. Sa at IHS warns that sales are likely to level off in the four main coastal cities of Shanghai, Beijing, Tianjing and Guangzhou, where local governments have launched restrictions on car-buying in a bid to cut pollution and traffic. Financial analysts also warn that China could be heading for a huge crash in housing prices, which would hit the increasingly affluent middle classes.

Meanwhile, manufacturers are hoping there will not be a repeat of strikes that stopped production at Honda and Toyota factories in 2010, when workers at supplier plants demonstrated against poor conditions. Regional politics also played a role in 2012 after the Tokyo government declared a disputed set of islands to be Japanese, to the fury of the Chinese authorities; nationalistic fervor decimated Japanese manufacturer sales. 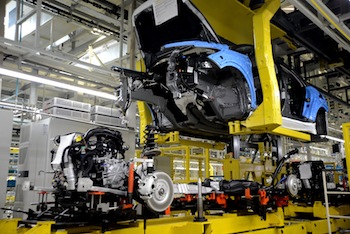 The Chinese government has recently suggested that the percentage of foreign ownership in joint venture partnerships might be allowed to increase, to the displeasure of CAAM, which said in a statement earlier this year that “relaxing the current foreign ownership restrictions will wipe out Chinese brands". It argued that foreign automakers had a clear competitive advantage arising from their global supply chains. Sa at IHS does not believe this will happen in the short-term, but predicts changes over the next 10-15 years.

In addition, foreign carmakers are slowly unveiling the new-energy focused brands they are required to set up with their joint venture partners, for example Dongfeng Nissan’s Venucia brand and BMW Brilliance’s Zinoro. Untangling a legacy of complex relationships will not be the work of a moment, and in the meantime the juggernaut of China’s vehicle sales will thunder on.