Toyota is by some distance the largest Japanese vehicle company but on the global stage it is engaged in a battle for primacy, alongside GM and the VW Group 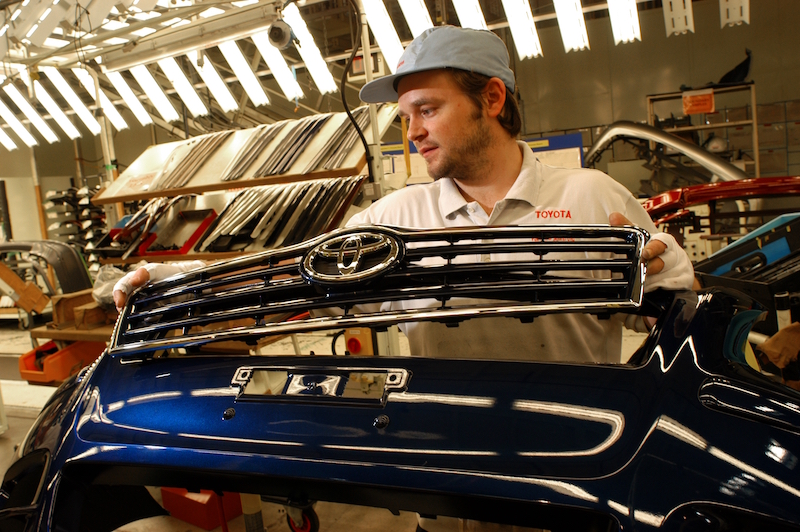 Global production in 2015 totalled nearly 8.7m vehicles under the Toyota name, a fall of just over 290,000 units, damaging its attempt at becoming the global number one. While Toyota brand sales rose last year in North America (to 2.84m units), they declined across Europe and much of Asia. Group revenue rose 4.3% to just over 28.4 trn yen, while net profit rose 6.4% to 2.3 trn yen, suggesting higher profits per vehicle, due to rising Lexus sales and strong SUV sales in North America contributing to the rise in profits. Despite the fall in Toyota brand sales, with Daihatsu, Subaru and Hino Trucks part of the group, sales of over 10m a year in total are sustainable, but a strong recovery in Toyota brand sales will be required to push the group to 11m and more, and global supremacy.

Under the Toyota name, in Japan it operates four vehicle plants of its own, along six more plants at wholly-owned subsidiary companies, as detailed in the table below. It also operates eight component plants (mostly making engines, transmissions and related parts) and one wholly-owned subsidiary component factory. These are summarised in the table below. 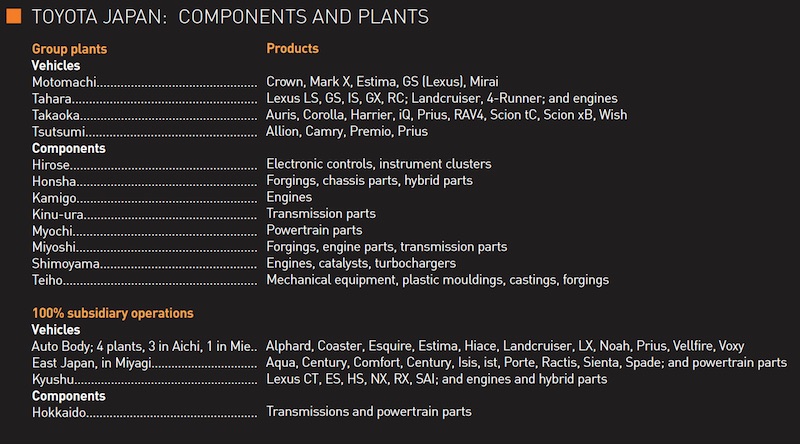 Outside Japan, Toyota operates plants in all vehicle producing regions. In North America it makes the Corolla, RAV4 and Lexus RX350 vehicles and aluminium wheels in Canada; and in the US it operates nine plants making Avalon, Camry and Corolla cars, Tacoma and Tundra pick-ups, Sienna minivans and Sequoia and Highlander SUVs, as well as engines, transmissions, catalysts and steering systems. Production in 2015 also included the now discontinued Venza crossover which for a short period was one of the Japanese-brand models made in the US which was exported to Russia.

In Europe it operates car plants in the UK, Turkey, France and the Czech Republic (the latter being a JV plant with PSA), plus engine plants in the UK and Poland, as well as a transmissions plant in Poland. It also produces vehicles in Russia, Argentina, Brazil, Mexico, Venezuela, South Africa, China, Taiwan, India, Indonesia, Malaysia, Philippines, Thailand and (until 2017) Australia, as well as operating CKD facilities alone or with local partners throughout Asia and Africa.

Following the Brexit vote, there has been much speculation on the future of Toyota’s UK plant

The company plans to make 10.2m vehicles worldwide in 2016, a broadly similar total to the volumes made by the group in 2015. This total includes vehicles made by Subaru and Daihatsu (which are now consolidated within the group) and trucks from Hino. It expects a decline in sales in 2016 in many emerging markets, especially in Thailand and Indonesia, but continued strong sales growth in the US. In 2015, Toyota built more than 2m vehicles in North America for the first time and expects to do the same in 2016.

The company has recently been adjusting its manufacturing footprint worldwide and investing in a number of new facilities; these investments are truly global as explained below and at the heart of the recent investment programme is the installation of the ability to build vehicles on the Toyota New Global Architecture (TNGA), the new platform and manufacturing system which will underpin all Toyota vehicles in the C and D segments. Investments in TNGA facilities are being made in Turkey, North America, India and elsewhere – it will be a truly global platform.

IndiaHere Toyota has opened a new diesel engine plant in a joint venture with Kirloskar Systems. Costing just over US$16m, the plant will be able to make 108,000 units a year; it will make the group’s new Global Diesel (GD) engine and is the third plant to make this engine, the others being in Japan and Thailand. In vehicle production, Toyota’s Indian plants will progressively move away from producing vehicles on low-cost platforms and will instead switch to making cars on the TNGA platform which is also being installed in Toyota plants in Turkey, the UK and the US. 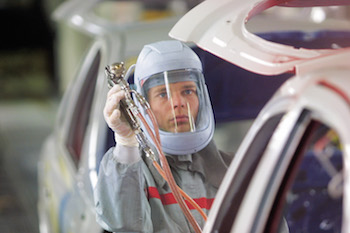 Outside Japan, Toyota operates plants in all vehicle producing regions

IndonesiaProduction at a new engine plant at Karawang in West Java began in March 2016. This plant has capacity to make 216,000 units a year – double that of its India and Brazilian engine plants which have also recently opened. The Indonesian plant will make 1.3 and 1.5 litre NR engines for local demand and regional export. This engine plant has been designed with Toyota’s new production philosophy in mind. This focuses on environmentally friendly systems which also are simpler and more flexible than previous installations; the plant is also fully-integrated and carries out all key manufacturing aspects of engine production under one roof.

With on-site casting and machining for example, transport costs between previously physically separate plants are eliminated and total investment costs are said to be as much as 40% lower than in previous systems. The factory features on-site smelting, the first time this has been installed at a Toyota plant outside japan, as well as the production of inorganic sand cores (again a first outside Japan). One of the key vehicles to use these engines will be the Sienta MPV which is sold across south-east Asia, highlighting the plant’s role in production and supply of engines and vehicles across the region.

MalaysiaCurrently Toyota produces cars in Malaysia at UMW Toyota, but this factory will stop manufacturing cars in early 2019 when it will switch to commercial vehicles only. By this stage, Toyota will have opened a new plant at Klang in Selangor state, capable of making 50,000 vehicles annually, following an investment of 49bn yen. The plant, announced in May 2016, follows announcements in 2015 to build new plants in China and Mexico, announcements which confirmed Toyota’s return to major investments new facilities, following an investment freeze in the aftermath of the 2008-09 recession.

ThailandIn line with the depressed sales volumes expected in the country this year, production is also declining and in July it announced plans to cut jobs at its four Thai vehicle plants. This is one of the few disappointing stories for production at Toyota at the present time. The cutbacks in Thailand reflect both declining local sales and an expectation of declining export sales to Europe and especially the UK, following the Brexit vote. Toyota has a capacity for 770,000 vehicles in Thailand, but only made around 635,000 in 2015, of which 377,000 were exported.

FranceIn addition to its own car plant at Valenciennes in northern France which makes the Yaris, Toyota also has a production JV with PSA which produces the Proace medium van, alongside the Citroen SpaceTourer and Peugeot Traveller. This plant had been a PSA-Fiat JV operation and when Fiat pulled out there were fears it would close, but Toyota’s involvement meant it could continue; PSA’s volumes alone would have been insufficient to keep the factory going and would not justify the investment required for the new models which have just begun to be launched.

RussiaHaving made the Camry in Russia for several years, but also having never fully utilised the 50,000 units’ annual capacity installed there, there had been some doubts over the future of Toyota’s plant in St Petersburg when the economic downturn hit the country. However, Toyota has retained faith in Russia and actually doubled capacity, to 100,000 units annually, adding production of the RAV4 SUV. Production started in August this year, with an expansion in stamping and injection moulding capacity also taking place. This expansion created 800 new jobs and involved new investment of just over €90m.

TurkeyThe Toyota plant at Sakarya is gearing up to produce the C-HR compact crossover, alongside the Corolla and Corolla Verso. Production should begin at the end of 2016 when capacity at the Turkish plant will have reached 280,000 units a year, up from the current 150,000 units’ annual capacity. Investment for the C-HR – which will include a hybrid model (the hybrid system coming from the UK where £7.1m has been invested to increase production of hybrid engines) – has totalled around €350m. The C-HR is also the first European-made Toyota model to be based on the new TNGA platform. Employment at the plant will increase by 1,000, to 4,000, once the plant is running at full production rates for the new model. 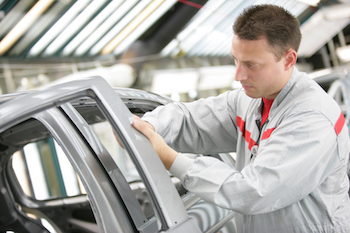 In France, Toyota operates its own plant at Valenciennes as well as a production JV with PSA

UKFollowing the UK’s decision to leave the EU, there has been much speculation regarding the future of Toyota’s engine and vehicle plants in the UK. In the short term there will be no change, and this was made clear by the head of Toyota Europe, Dr Johan van Zyl to a UK automotive industry conference in the days immediately after the Brexit vote. The Burnaston factory is understood to be pressing ahead with plans to introduce new models, based on the new TNGA platform; the investment for this switch is believed to be well-advanced and it would accordingly appear to be uneconomic and impractical for the company to effectively abandon this programme now. Similarly, the engine plant at Deeside supplies engines to Toyota plants worldwide and replacing this source could not happen overnight and it would be questionable economics for the company to close this facility in the immediate aftermath of the Brexit vote. While the immediate and medium term future of the UK plants is secure, in the longer term what will happen to them when the next round of investment decisions is made is another question.

ArgentinaHere capacity has recently grown from 92,000 to 140,000 units a year; production focuses on the Fortuner SUV (sold locally as the SW4) and the Hilux pick-up truck. The increase in capacity is mainly for export across the region, as opposed to national demand.

BrazilIn May 2016, Toyota opened a new engine plan at Porto Feliz, following an investment of $170m. As in the case of the new Indian diesel plant mentioned above, capacity here will also be of 108,000 units a year. The plant will produce four-cylinder, dual-VVT NR engines in 1.3 litre and 1.5 litre formats. The engines will be mainly used in the Etios which is made in Brazil and exported across Latin and Central America, including the Caribbean. This plant is actually the company’s first engine plant in South America; it has been designed on the same simple, yet integrated basis that was first deployed in the Indonesian plant mentioned earlier.

As noted above, regional production exceeded 2m units for the first time in 2015; this was achieved following a $360m investment in Kentucky to make the Lexus ES350; the start of production of the new Tacoma pick-up in Texas; increased V6 engine production in Alabama; switching to three shift production at Baja California; and contract manufacture by Mazda of the Scion iA and Yaris at its Salamanca plant in Mexico.

As well as deploying the most modern and efficient manufacturing systems it can, Toyota’s North American plants are designed to be as environmental as possible. For example, its plant in Texas, which makes SUVs and pick-up trucks, recycles 1.2m gallons of water a day; the company claims to return cleaner water to the local water supply than it receives from it originally. It has also made significant progress with solar energy, having installed two acres of solar panels which can generate around 200 kilowatt hours of power.

In 2016, construction of Toyota’s first all-new plant in North America in many years will start at Apaseo el Grande in Guanajuato; this will make the new Corolla – on the TNGA platform – from 2019.