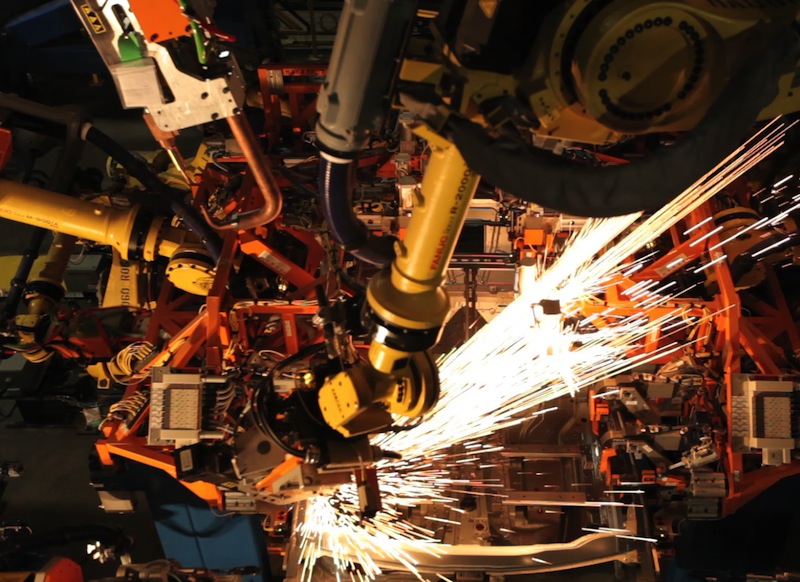 For its forthcoming CT6 large saloon, US luxury brand Cadillac has married new bodyshop techniques that will “take craftsmanship and manufacturing technology to a new level,” according to the GM brand’s president, Johan de Nysschen. The car’s aluminium-rich body-in-white (BIW) will be constructed in a new bodyshop at GM Detroit-Hamtramck Assembly, Michigan, which has been updated at a cost of nearly $400m. It is in this bodyshop that Cadillac claims to be pioneering new ways to unite aluminum and steel material mixes. “Never before has an automaker brought this combination of joining techniques together for a single vehicle,” said Travis Hester, CT6 executive chief engineer, in a statement.

Detroit-Hamtramck has been a key Cadillac plant since it started production in 1985, initially building the Eldorado. But it has also been at the forefront of GM innovation; the Chevrolet Volt petrol-electric hybrid started production there in 2011, while the Vauxhall/Opel Ampera electric vehicle (EV) began a year later. Cadillac also makes the hybrid ELR coupe at the plant. The investment for the CT6, and the next-generation Volt, is the biggest for the past five years and signals Cadillac’s ambitions for its luxury saloon.

Hester and Greg Hagen, CT6 manufacturing chief engineer, told AMS in an exclusive interview that planning for the car started three years ago, when several high targets were set. Due to go on sale at the beginning of 2016, the CT6 will be wedged in the gap between the BMW 5- and 7-Series; the Audi A6 and A8; and the Mercedes E- and S-class. “We’ve hit a very nice sweet spot. It’s for people desiring a luxury car a little bigger than a 5-Series but a little more nimble,” said Hester. In China, it will compete against long-wheelbase versions of the 5-Series and A6.

The German premium brands are formidable rivals, so in order to create a car with any hope of beating them, Cadillac knew it had to combine refinement with exceptional driving dynamics – goals which start all the way back in the bodyshop. “We needed to create a body-in-white that was incredibly light, and incredibly stiff,” stated Hester.

The torsional rigidity would create “a very good platform for the NVH [noise, vibration and harshness] team to work on, both structurally and acoustically”, he explained.

The objective was best-in-class weight. “That’s a very tough order when you get into it,” Hester says. It was also vital for another reason: the car will be available as a plug-in hybrid achieving a promised 70mpg, according to reports. The weight of that drivetrain will, in theory, be offset by the lightness of the body.

Multi-disciplinary material use
Hester insists that the car will be class-leading for weight and stiffness – a phenomenal achievement if it proves to be true. The key to realising these ambitions was a new GM concept called Multi-Disciplinary Optimisation (MDO). What this did was to allow the engineering and manufacturing teams to join almost any automotive-grade metal to another, by welding, screwing, glueing or riveting.

This liberated approach allowed engineers to use whatever materials they wanted, something Hester calls “self-selecting”. A metal could be chosen for a particular area based on its ability to help the team in its overall goal to beat the German OEMs, rather than because production constraints dictated it. “The manufacturing team have broken us free on this vehicle to do pretty much anything we want,” said Hester. “It gave us quite an amazing opportunity.” The car uses 11 categories of steel and aluminium for the BIW, which is 60% aluminium and 40% steel. The properties of each were carefully analysed and assigned to the appropriate area.

“The manufacturing team have broken us free on the CT6 to do pretty much anything we want" – Travis Hester, Cadillac

One might ask why Cadillac chose not to build its new model completely in lighter-weight aluminium, but according to Hester such an approach would involve mitigating structure-borne and airborne noises transmitted by the aluminium. “Sometimes you have to put additional acoustics and different dampers through the car, and that can add more weight than actually you save,” he explained. Thus, thin sheets of high-strength steel (HSS) were preferred in NVH-critical areas.

In general, said Hester, the more desirable acoustic properties of steel led to it being used mainly around the passenger cell, while aluminium was selected for structural areas away from the cell. “That allowed to get us incredible NVH performance,” Hester claimed.

It was not merely a case of swapping parts that would have been steel with aluminium or HSS. According to Hester, a lot of work went into improving die-castings, including high-pressure aluminium castings – “some of the biggest you’ve ever seen”. “It’s a different approach we are taking to actually improve casting, extrusion, stampings in all these different grades,” he said.

Reducing the rivets
Deciding which method to use came down to two factors, according to Hagen: access for the 205 bodyshop robots and the material combinations they were joining.

When combining aluminium with aluminum, Hagen’s team could draw on a spot-welding process GM says it has patented. Normally, manufacturers putting together a mainly aluminium BIW use self-piercing rivets, but Hagen says that spot welding is far preferable. “From the material cost as well as application and cycle time, it's much more effective to spot weld like you do with steel,” he stated. There are other advantages, too: weight savings and aesthetics. “To be able to spot weld also allows us to thin up areas. Keeping seal flanges very thin keeps the vehicle very, very refined,” he explained. “It blows all the way over to the appearance of the car.”

The CT6 does contain around 350 rivets, mainly in the underbody structure, and in the case of two-sided access for aluminium-to-steel joins. But that is a tiny number compared with other aluminium-rich cars. Jaguar, for example, uses 2,700 rivets in the bodyshell for its new XE saloon – a model which is built at a brand-new, state-of-the-art bodyshop in Solihull, UK. When AMS visited the plant last year, Jaguar said the original aluminium-bodied XJ limousine had around 4,000 rivets. “To pull that mass and cost out of the system is fantastic,” concluded Hester. 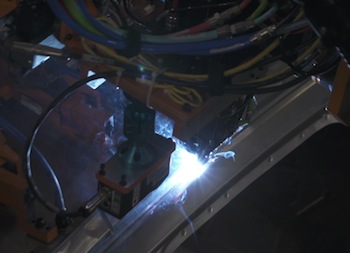 A further advantage is robot utilisation: “If I have more alloy spot weldings, that allows me to keep robots very busy with one tool on the end that I can use in multiple locations and try to get a very effective use of my cycle time,” said Hagen.

To join aluminium and steel with just one-sided access, the Detroit-Hamtramck bodyshop uses flow-drill screws along with structural adhesive which, combined, gives the same strength as a spot weld, according to Hagen. The screws are not much different from wood screws, and Hagen estimates that around 600 are used in the BIW, with around two-thirds used on the lower structure and one-third on the upper structure.

Hagen reckons they are a big improvement on gas-metal arc welding (although arc welding is used in places). “It’s a great alternative really, because there's no weld distortion,” he stated. “Together with structural adhesive it’s a very clean operation.”

"From the material cost as well as application and cycle time, it's much more effective to spot weld like you do with steel" – Greg Hagen, Cadillac

Saving space in production
He said the sequence for building the BIW is actually very similar to that of a conventional steel-bodied car, involving an underbody marriage system and inner and outer framing station with 28 robots. Cadillac says the robots in those two stations are choreographed to compensate for vibrations. The big challenge was marrying all the different joining processes within a particular cell without slowing down production. “We've done a lot of work to come up with a way that allows us to have excellent throughput, and build a very nice quality car without taking up any more space or processing room that we need to build a steel car,” said Hagen.

Once the body has been completed, a large robotic arm lifts it into an upper-level conveyer – which is unusual for a vehicle the size of the CT6, Cadillac points out – so that it can be transferred across the Detroit-Hamtramck plant. 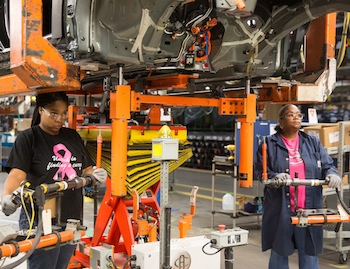 The 138,000 sq.ft bodyshop has been “space-protected”, according to Hagen. What this means is that Cadillac can run different body styles on the same platform if necessary. Johan de Nysschen has already dropped hints that Cadillac will make a car larger than the CT6, so it looks likely that both models will come through this plant.

Neither Hagen nor Hester would comment on the capacity of the bodyshop or say how much the brand expects to sell. However, the car will be sold both in North America and China, with a longer-term plan to introduce it in Europe as a part of a blitz to finally get some traction for GM’s luxury brand in a territory ruled by the German premiums.

If the car is a success, it is likely that Cadillac would have to move Detroit-Hamtramck from its current single-shift, five-day schedule – and get those new bodyshop robots really working hard.