With sales, revenue and production investments all on the increase, Audi is really making some noise 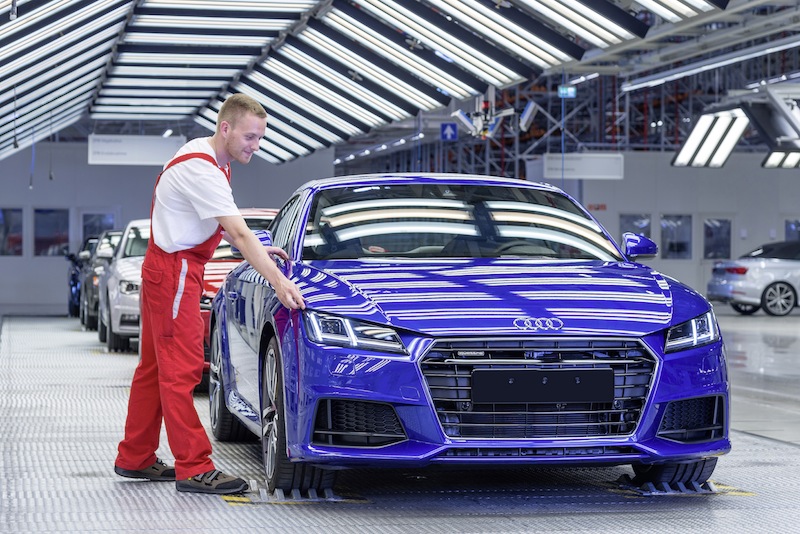 Production sites in this article:

Strong financial results will allow Audi to continue with its impressive new model launch programme and its international expansion; record production and sales numbers in 2014 confirm the market’s acceptance of its new models and the first quarter figures for 2015 suggest that another strong set of full-year results can be expected.

Audi benefits from being part of the Volkswagen Group, but it has certainly not been subsumed within this giant company and indeed has managed to achieve a distinctive market position in direct competition with its German rivals, BMW and Mercedes-Benz. As well as having a wide product range, it is also a recognised leader in diesel engine manufacturing and hybrid technology, both in production vehicles and motorsport.

Audi’s revenue in 2014 was over €53 billion ($58 billion), with an operating profit of €5.15 billion, or 9.6%; global sales were over 1.74m units and the company intends to sell even more in 2015. In Q1 2015, revenue was €14.7 billion, with a €1.4 billion operating profit, at 9.7% margin, a slightly higher ratio than in 2015. On the basis of Q1 revenue, it seems reasonable to expect the company to exceed its 2014 revenue total. Further growth can be predicted on the back of continued investment; Audi plans to increase its model range to 60 different vehicles when all body styles and powertrain variants are considered. The OEM will invest over €24 billion in new products and technologies by 2018/19.

Audi has already invested heavily in its production facilities and further investments will follow in the years ahead. This article looks at all of these manufacturing plants and their production line-up and capabilities, highlighting where much of the planned future investment will go toward continuing the company’s recent growth profile.

Production in Germany
Audi has two key plants on home territory: Ingolstadt, the headquarters plant in Bavaria, and Neckarsulm, south-east of Stuttgart.

Ingolstadt
This factory produced over 600,000 vehicles in 2014 and is, after VW Wolfsburg, the second-largest plant in Europe; approximately 2,500 vehicles are produced every day, with over 40,000 employees, including design and engineering staff as well as manufacturing workers. The current production line-up consists of the A3, A4, A5 and Q5. The Q5 will stop production next year, with its replacement model to be made at a new Audi plant in Mexico.

A new facility is currently being built to make a smaller SUV, the Q1, which will start production in 2016. Ingolstadt will receive investment of around €500m a year through to 2019, with this money allocated to the bodyshop for the next A4, a new paintshop, the facilities for the Q1 and a new design centre.

Ingolstadt’s press shops work in both steel and aluminium, processing around 1,700 tonnes of steel a day. Audi has also installed hot-stamping press capabilities, in which sheet metal is heated to 940°C then placed in a die for stamping. The A3 and A4 have their own bodyshops, with 900 robots producing the A3, and 2,500 robots making the A4 bodies. Ingolstadt makes extensive use of just-in-time and sequenced deliveries; there are 14 suppliers operating in the nearby supplier park, delivering directly into the factory. In addition, there are two consolidation centres at Ingolstadt which co-ordinate parts, mainly body pressings and chassis parts, for delivery to Gyor in Hungary for the A3 and TT, and to Brussels in Belgium for the A1.

Audi has shown willingness to invest in a variety of key technologies which are aimed at marking it out from the competition. The best example of this is in lighting; Audi has the biggest transportable light tunnel in Europe, where it has developed skills in matrix-LED lighting. The Ingolstadt plant also has its own wind tunnel, with three test units, an aeroacoustics wind tunnel, a thermal wind tunnel and a climatic wind tunnel.

Muenchsmuenster
Ingolstadt has a satellite site at Muenchsmuenster, 30km to the east, which specialises in die-cast aluminium parts, hot- and cold-stamped pressings and suspension components. This new plant started production in late 2013 and will not reach full production until 2016. Audi Muenchsmuenster has some of the industry’s most sophisticated aluminium-casting furnaces, plus die-casting cells which have a maximum cycle time of two minutes and casting pressure of 4,400 tonnes.

In the press shop, there are two more furnaces for the hot-stamping line which can simultaneously accommodate 40 sheet-metal blanks, heated to 800°C (slightly lower than at Ingolstadt) in six minutes. The heated parts are then moved into two presses which use water-cooled tools that shape the red-hot blanks at around 600°C. A conventional cold press line has also been installed, at the centre of which is a transfer press working at a rate of 30 strokes a minutes and a lead press force of 3,200 tonnes. A strip-cutting line has been installed this year to feed the presses with automatically cut blanks.

Also at Muenchsmuenster is a suspension component production facility, making aluminium wheel mounts and pivot bearings, steel wheel hubs and cast-iron brake discs. By the end of 2016, seven lines will be moved here from Ingolstadt, meaning that each site will be able to make more than 50,000 parts a day.

Neckarsulm
Audi’s second plant in Germany employs around 16,000 people and produces over 270,000 vehicles a year. The factory makes some A4s (most being made at Ingolstadt), the A5 cabrio (the hardtop is made at Ingolstadt), the A6 sedan and estate, the A7 and the A8; the plant produces the S version of all these models, plus the all-road A6, the hybrid version of each model and the long-wheelbase version of the A8. An on-site subsidiary facility, Quattro, makes the R8 coupe and cabrio (Spyder), plus the RS versions of the A5 cabrio, A6 estate and A7.

Neckarsulm is also the centre of lightweight production at Audi, and the origin of the aluminium space frame concept for which the OEM is particularly well known. In addition, the lightweight competence centre has developed expertise in carbon-fibre reinforced plastic (CFRP) which is used extensively on the R8. Neckarsulm engineering is also responsible for the development of the Audi V engines made at Gyor, plus the brand’s motorsport engines. The facility includes one aluminium-steel bodyshop and two all-aluminium bodyshops.

Outside Germany, Audi has full production facilities in Belgium and Hungary in Europe. The OEM also uses the Seat site in Spain and VW facilities in Slovakia (and China).

Martorell, Spain
Since spring 2011, the Q3 SUV has been made at the Seat factory in Barcelona. The decision to produce Audis in Spain was taken to help Seat boost its utilisation; at the time, Martorell had the lowest capacity utilisation of all VW Group plants in Europe, and Q3 production has been a major contributor to Seat’s improving financial results in recent times. Q3 output in 2014 was nearly 113,000 units, up from just over 106,000 units in 2013.

This is a full production facility, although most of the pressings come from Audi in Germany. The bodyshop has been highly automated since Audi became involved, with over 430 robots used in the welding hall. Daily production is now 550 units. 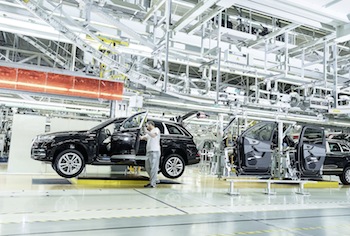 Brussels, Belgium
This was formerly a Volkswagen plant, but since 2010 it has been making the Audi A1, following a cumulative investment to date of close to €580m. The factory does not have a press shop and so receives pressings from Germany. Output in 2014 was just over 115,000 vehicles but 200,000 per year would be possible with extra shifts.

Gyor, Hungary
This plant has a double focus, as Audi’s main diesel engine plant and its sole production location for the TT roadster and coupe, plus the A3 cabrio and sedans. In 2014, just under 1.975m diesel – and petrol – engines were produced, as well as over 135,000 vehicles. Total capacity is now 160,000 units a year.

When TT production started in the late 1990s, painted, welded bodies were shipped from Ingolstadt for final assembly. Now, following an investment programme worth €900m, Gyor has its own bodyshop and paintshop.

Bratislava, Slovakia
Here, the Q7 SUV is produced in its own hall close to its sister vehicle, the VW Touareg. Steel and aluminium pressings are delivered from Ingolstadt and Neckarsulm for welding in the Bratislava bodyshop. Q7 bodies have over 3,400 spot welds and also around 100 metres of seam welding. At the nearby supplier park are 17 suppliers providing just-in-time, sequenced deliveries. Slightly over 60,000 Q7s were made in 2014, but there is capacity for around 80,000 units a year.

Rest of the world

New Audi facilities are being opened in Mexico and Brazil; CKD operations also take place in India, Indonesia and Russia. 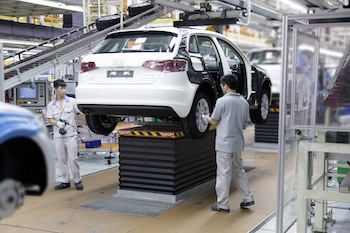 Changchun, China
Audi makes the Q3 and Q5 SUVs here, plus the long-wheelbase versions of the A4 and A6. This is a full manufacturing facility, with its own press shop and a total capacity of over 480,000 units a year, with significant room for expansion. Production in 2014 was just over 483,000 units. The long-wheelbase versions have been developed for the Chinese market and are only produced here.

San José Chiapa, Mexico
Audi is building a new full manufacturing facility in the country which will start production in 2016 with the replacement for the Q5 SUV that is currently made at Ingolstadt. The San José Chiapa plant will have an annual capacity of 150,000 units and is receiving a total investment of over €1bn.

Audi has encouraged a significant number of suppliers to locate in Mexico and claims it will have a local value-added level of 65% upon start-up, rising to 90% in the medium term. However, it is not entirely clear how Audi accounts for engines in this calculation, as most of these will come from Europe.

São José dos Pinhais, Brazil
Audi will start Brazilian production in late 2015 at its new facility in Paraná, which is costing €150m and will make the A3 sedan and Q3 SUV. The A3 sedan, for which Audi says it will purchase many components locally, will be the first to come off the assembly line. Q3s will follow in 2016. 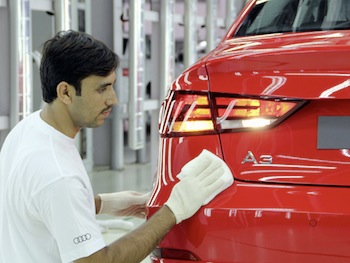 Aurangabad, India
In Aurangabad, Maharashtra, Skoda has a large plant in which a number of Audi models, sedan versions of the A3, A4 and A6, plus the Q3, Q5 and Q7 are assembled on a CKD basis. Just over 10,200 Audi vehicles were assembled in India in 2014, a modest rise on the 9,100 made in 2013. Components are shipped from Hamburg and Bremerhaven in Germany, Antwerp in Belgium or Barcelona, Spain (for the Q3).

Jakarta, Indonesia
Audi has been assembling vehicles locally for the Indonesian market since January 2011 in association with Indomobil Garuda Mataram Motors; the A4 and A6 are assembled from SKD kits. The 2015 target is 2,700 units, a significant growth on the 126 made in 2014 and 186 in 2013. Total capacity is 5,000 vehicles a year.

Kaluga, Russia
Within the VW Group facility at Kaluga, Audi has assembled the A6 and A8L in SKD format since 2013. These are fully assembled in Germany and then partially dismantled for shipment to Russia, then re-assembly.