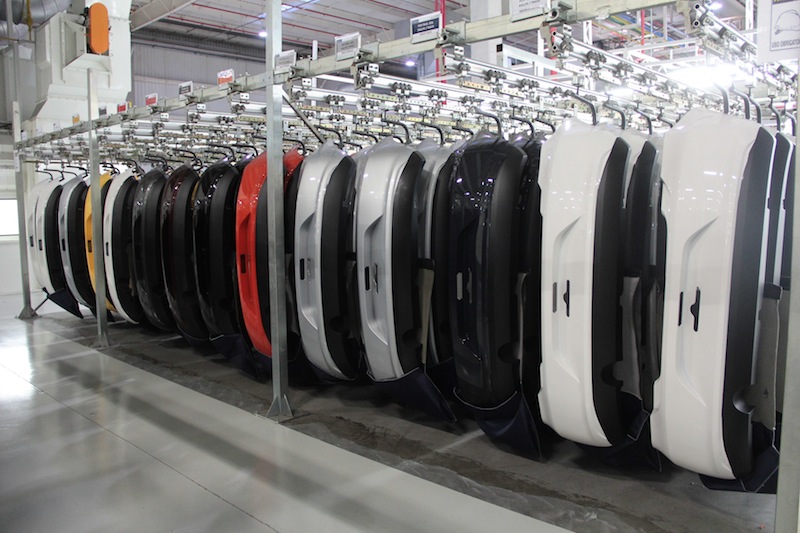 In the small laboratory at Faurecia Automotive Exteriors, São Bernardo do Campo, Brazil, it takes a long time to find a part showing the flaws that can occur during bumper painting; one of the team members escorting AMS around the plant eventually resorts to a sample piece. This is not because there is a shortage of potential pitfalls – poor adhesion and colour mismatching being the most serious – but because Faurecia is enjoying ongoing success with the NewTech process that it brought to Brazil in 2012, when the company constructed a new plant in São Bernardo do Campo to serve the local OEMs.

“We are just at the beginning and we have only one year of experience of NewTech in South America,” says Olivier Lefebvre, the company's vice-president for the region. “But the big achievement today is the quality, which is really impressive.”

Originated by Faurecia in its European homeland, NewTech is an automated method for exteriors painting. As Lefebvre explains, this is a traditionally manual process in South America, and some rival companies still have lines of personnel applying the paint with spray guns, in an environment laden with safety as well as quality issues. Using the same type of equipment as Faurecia’s European facilities, the São Bernardo do Campo plant operates a compact and flexible painting system which generates consistently high results in terms of quality as well as environmental savings that include an energy reduction of 25%, a 95% drop in CO2 emissions and a decrease in paint sludge of 15%. The process also enables easy recycling of water and solvents.

Unlike a conventional operation where multiple stations feed into an expansive painting area, the NewTech layout comprises a linear arrangement from receipt of raw materials through painting to assembly. In accordance with lean manufacturing principles, lines can be shut down or restarted to accommodate fluctuations in demand without affecting the rest of production – which, as Lefebvre points out, is “good in a time of crisis”.

Moreover, except for the input of raw materials and the output of finished products, there is no need to use forklifts to move components around the plant, again minimising space and safety concerns. The plant maintains storage for just one shift’s worth of components.

Covering 10,000 sq.m, the São Bernardo do Campo plant has three lines: one each for the VW up!, the PSA 208 and the VW Saveiro. Having progressed from a bare construction site in January 2012, the facility has been turning out 1,900 bumpers per day since April 2014.

Injecting the right quality
The plant is equipped with three KraussMaffei injection-moulding machines with clamping forces of 3,200 tons and 2,700 tons, which are currently used to form bumpers in two different sizes – although Lefebvre adds that these machines are “very flexible” and can make a wide range of bumpers. The size of the machines necessarily reflects the composition of the vehicle market; the equipment at Faurecia’s plant in Buenos Aires, Argentina, offers a clamping force of 4,000 tons to produce parts for larger vehicles.

The process begins with the feeding of the injection mould with small granules of plastic – sourced locally, but from global suppliers – which are subjected to high temperature and pressure. The two halves of the mould then open up and a robotic arm lifts the part out, placing it on a conveyor leading to a human operative, who has a timeframe of just one minute to perform a quick, visual inspection and attach ancillary components.

“What is very important to have in mind is that the OEMs are now expecting the same service and system all around the world"
– Olivier Lefebvre, Faurecia Exterior Systems

Lefebvre emphasises that the quality achieved at this early stage is vital for the end result, since the later application of paint highlights even small surface defects. The bumper is placed with others on a rack to cool before painting.

The bumpers are conveyed by trolley to a room where the conditions are carefully controlled and workers wear protective clothing to combat dust (“our big fight”, says Lefebvre). Personnel place the components individually on a moving rack, cleansing them with handheld spray guns followed by cloths. The bumpers then enter an enclosed line for an automated, four-step painting process.

Burning rubber
The first stage is flaming, where the surface of the bumper is singed to allow the painting of the plastic, which Lefebvre says would otherwise be “impossible”. The São Bernardo do Campo plant uses Fanuc robots which are carefully calibrated with the optimal distance between the part and the flame; far enough to prevent the two from touching but close enough to properly prepare the surface. This, Lefebvre states, is “one of the most important operations” because it ensures the adhesion of the paint – one of the two crucial quality criteria mentioned earlier.

The next three steps are what Lefebvre describes as “classical” painting processes and are performed by robots with electrostatic spray heads: primer, colour and clear coat. At São Bernardo do Campo, the level of automation means that just one worker is required to monitor the process remotely by computer; another operating “below decks” loads the paint into the machines.

As with standard automotive painting processes, the parts are then cured in an oven. After two hours, the bumpers emerge by conveyor and are checked for defects before being polished by workers using cloths; they can be reworked if necessary.

The bumpers are loaded onto racks, organised by colour so as to make the assembly process more efficient; parts are picked by workers according to the vehicle model and customer, and conveyed by trolley to the assembly lines. 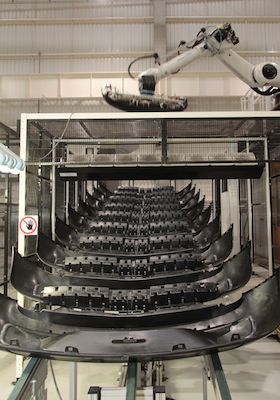 In the final stage of the process, the headlights, grille and spoiler are united by a combination of man and machine, including manual welding. The assembly line AMS saw at close quarters was for Saveiro front bumpers – rear bumpers going to a different line.

According to Lefebvre, for parts which are not mandated by the OEM, the local content level stands at roughly 80%, having been increased from 50% over the past year by efforts to develop solutions with partners in the region. Some of the mandated parts come from Europe or Mexico, but ultimately Lefebvre says the target is to achieve 100% local content and that this is “the main challenge” the company faces in South America.

Finally, the bumpers reach the control area, where they are checked for defects under bright lights that are arrayed vertically rather than in the tunnels used to inspect entire vehicles. According to Lefebvre, the orientation and distance of the examination depends upon the requirements of the customer (lights front or back, and between 1-3m away). The parts are checked not only for the smoothness of their surface but colour, as it is essential that they perfectly match the body of the vehicles being produced simultaneously by the OEM.

Once the components have passed quality control, labels are attached for JIT delivery, with trucks collecting two or three racks at a time. Since the bumpers need to be in pristine condition on arrival at the OEM, they are individually packaged to prevent damage in transit; this is returned for reuse and the continuation of the production cycle.

A global solution
“What NewTech brings is a standard solution of painting which delivers a high level of quality,” emphasises Lefebvre. “What is very important to have in mind is that the OEMs are now expecting the same service and system all around the world, which is why they choose to go to global players like Faurecia.” Thus, while the design of South American bumpers may differ slightly from European versions, according to regional vehicle adaptations, the technical specifications for paint thickness, adhesion and colour quality are the same – and such consistency is exactly what Faurecia’s automated process delivers.

Lefebvre admits that implementing NewTech at São Bernardo do Campo has required a large equipment investment, but the results in terms of meeting the crucial exteriors painting criteria and serving the needs of demanding global OEMs are clearly worth it. Nor has this gone unnoticed by some of the biggest players in South America; Faurecia will be one of the key suppliers at the important new production hub being developed by Fiat in Goiana, Pernambuco State. The company is currently setting up two painting lines there, with operations set to commence next year. 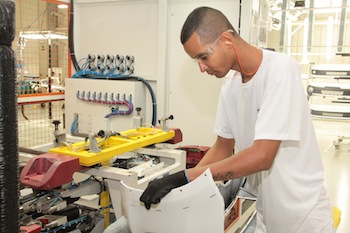 With Fiat’s new complex located 2,000km from São Paulo in the under-developed north-east of Brazil, Faurecia will thus gain a toehold in a region of immense potential, in support of the OEM which previously led the emergence of automotive production away from Brazil’s biggest city – in Betim, Minas Gerais State.

But the company’s ambitions do not end there; according to Lefebvre, Faurecia plans “to continue the deployment of lines in the future, not only in South America but across the world”.