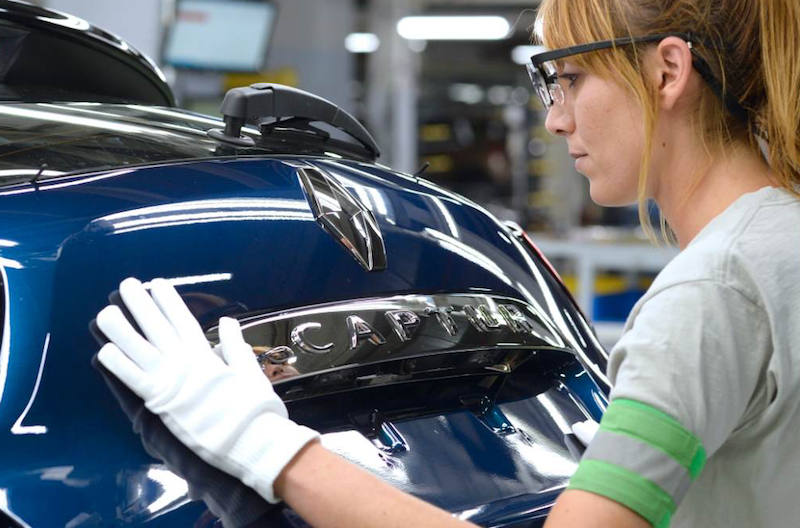 The Spanish plant has become a star in Renault’s production network for making one of the brand’s most successful new-segment launches: the Captur small SUV. Since start of production in 2013, the car has passed the ‘1m built’ milestone and while most are bound for Europe, a number are also exported to far-flung markets such as South Korea and China.

The Valladolid plant started production in 1972, but despite its fractured layout and original buildings, has reinvented itself to the point that it has been chosen as one of three plants in the Renault network piloting some of the latest digital technologies, bundled under the ‘Manufacturing 4.0’ tag. By rolling out advances such as Wi-Fi-enabled machinery, smart tablets for supervisors and digital parts tagging, the carmaker hopes to increase productivity, cut lost time and improve safety. The changes are pitched as helping both the customer and the worker. “The human is at the centre of the plant of the future,” says Jose-Vicente de los Mozos, Renault’s head of supply chain and manufacturing (and a former plant director at Valladolid). 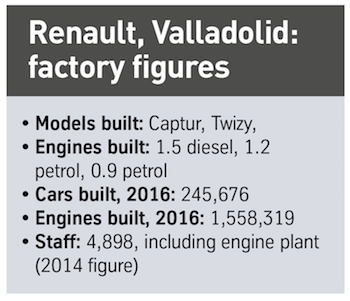 The plant also makes the Twizy four-wheeled electric scooter in small numbers, but Valladolid’s prominent visibility in the Renault network is mainly thanks to the Captur, which remains the bestseller in its segment across Europe despite numerous rivals launching since it made its debut over four years ago. Last year, the plant made 245,696 cars, of which just 2,855 were Twizys. It expects to produce around 250,000 this year, up from 212,133 in 2014 (the first full year of Captur production).

Valladolid, 200km north-west of Madrid in central Spain, is also vital to Renault’s engine production needs. The engine plant shares the same 100-hectare site on the outskirts of this modest city and produces a whopping 42% of engines for the Renault brand over three shifts. It also makes engines, both petrol and diesel, for the Dacia brand, its Alliance partner Nissan and Daimler, which takes the 1.5-litre diesel for its A-class range of small cars. It even supplies engines to India’s Mahindra. In total, engines from the plant are fitted into 36 individual models. The 1.56m units produced last year makes it Renault’s biggest engine plant, beating even Cleon in France, which just edges its Spanish rival on total output when gearboxes are taken into account.

The plant’s isolated location in central Spain makes a little more sense when you take into account that Renault’s Palencia plant is just 50km to the north. This is where Renault builds the Megane C-segment models and the related Kadjar compact SUV. Last year it made a record 332,247 vehicles, up from just 133,701 in 2014; a turnaround that has undoubtedly helped out Valladolid to the south, which supplies not just petrol and diesel engines, but also bumpers for both Palencia cars, stamped parts, and plastic parts for the Megane.

Digital improvementsPlenty of manufacturers are investigating ways to improve production using the latest digital technology, and Renault is no different. The firm’s hub for developing the technology is in its Renault Digital centre in Boulogne, northern France, where the firm employs 300 staff. Valladolid, Cleon in France and Curitiba in Brazil are the guinea-pig plants, but the first step in this connected revolution is making sure that those machines, people or even parts that need to be connected digitally can actually do so, which means Wi-Fi across the whole plant. That project is already 80% complete across Renault’s factories, notes Eric Marchiol, head of digital transformation for the manufacturing and supply chain.

Then you have to make the machines ‘smart’, which means installing sensors or cameras into every piece of significant machinery, including 300 stamping presses worldwide, some of which go back a very long way. Then the 5,000 plus robots have to be connected. “We have many types. So it’s a tough job,” Marchiol said. This now creates data, meaning Renault can perform what it calls ‘predictive maintenance’ – where technicians can spot problems ahead of them affecting production, or at least try to.

Next there’s traceability, which means tracking as many of a car’s 5,000 parts as possible either using RFID (radio frequency identification) tags or by scanning QR codes. This helps to identify where the parts are, relaying information to assembly staff about them (e.g. torque settings) and identifying ‘problem’ parts to narrower degree than just by batch. Each car has an RFID tag in it too, giving managers a real-time view of where vehicles are. The plan is to open up this information to customers, who then get to track their car through the build process.Plant-wide Wi-Fi will allow supervisors to log problems and send photos, via tablets, to managers without the need for paperwork or time-consuming walks to report. Answers arrive quicker and Renault reckons this saves supervisors an incredible 90 minutes a day.

The other update is one that’s becoming more popular across the industry – ‘kitting’ cars and engines with the parts they need in a container that travels with the car along the assembly conveyor belt. The kitting container is delivered to the start of the assembly area by Valladolid’s fleet of 210 AGVs (automatic guided vehicles), which follow magnetic strips on the floor to bring trailers line-side. Workers take the parts they need and fit them on the assembly line while standing on the belt for 20-50 metres depending on the station (of which there are 260 in the assembly hall). According to Renault’s Marchiol this has transformed the line from a “jungle of parts” five years ago to a much leaner operation.

Marchiol says that for the AGVs, Renault tested autonomous parts-supply vehicles but they proved far too expensive compared to those that followed the magnetic strip. The majority of the AGVs are low, skateboard-style versions made by Spanish specialist Kivnon, which push wheeled trolleys from underneath.

Two-tone paint shopThe stamping plant, bumper moulding area and the body and paintshops are all located on a separate site, close by but not attached. The bodyshop is on a 2.5-shift set up like all the major operations within the car assembly site (the half shift refers to half the staff, rather than half the time). Running three shifts throughout the plant would push capacity up by 50,000 a year to 300,000, says plant director Rafael Vazquez. However the bodyshop is 99% automated with 468 robots on site.

Like the bodyshop, the paintshop runs at 62 vehicles per hour with 106 robots painting 11 different colours. The difficulty here is that 79% of all Capturs are ordered in two-tone with a different coloured roof. That doubles the time the car spends in the paintshop because once it has been painted body colour, it has to be masked off and run through again to paint the roof.

The Twizy assembly hall is kept separate from the Captur operations and has a capacity of just 12 vehicles an hour. A staff of 30 build the car and the chassis is welded by hand – a low-tech method for such a futuristic car. The Captur assembly hall has just 10 robots and, like the bodyshop and paintshop, builds around 62 vehicles per hour on two a half shifts a day. It occupies the same 1972 vintage building as the plant started out using, complete with traditional serrated roof with window panels in the uprights, but has since been split across two floors. Doors and dashboard have their own sub-assembly lines. 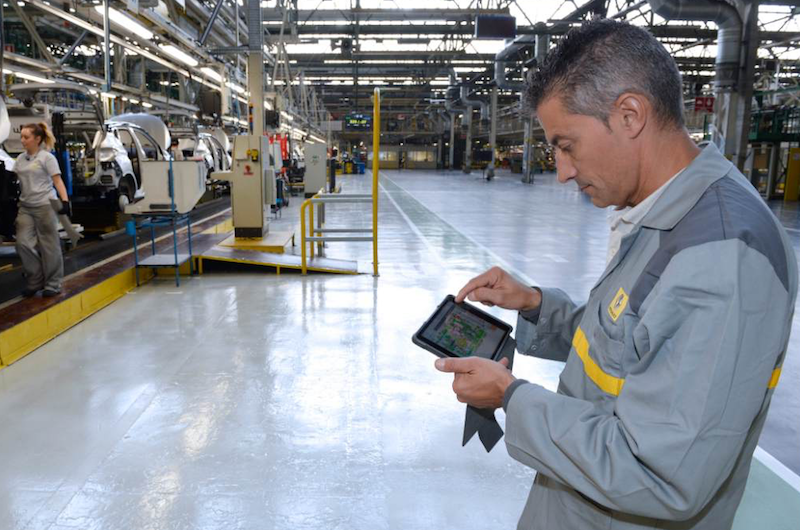 The Captur assembly line will be slightly extended for 2019 when the plant introduces a second model on the line, another B-segment SUV, reveals Vasquez. No more information is available about the car, but it is likely based on the Captur, possibly a slightly bigger one bearing the Grand name. The launch of the new model will supplement demand for the Captur, which will by then be getting long in the tooth, so overall output won’t change, Vasquez adds. The new car (but not the date or exact model) was announced last year as part of a new “competiveness agreement” signed with the Spanish unions to cover 2017-2020 that includes greater working time flexibility and salary increases limited up to 3.5% over four years.

One interesting update to the plant came in 2012 when Renault installed 50,000 sq.m of photovoltaic cells as part of a wider shift to solar power. They were fitted on top of new covered vehicle storage bays, which were built after Renault identified hail as “by far” the biggest financial threat to the plant from the environment.

Increasing petrol engine productionThe huge consumer swing away from diesel towards petrol-powered cars across Europe, prompted by the fallout from the diesel emissions crisis, has forced Renault to dramatically change its production at the engine plant. Currently 70% of production at the Valladolid engine plant is diesels, but not for long. “We think we need to increase petrol to 50/50 as soon as possible. We will probably see that by the end of this year,” says plant manager Anne Catherine Brieux.

Diesel car sales in western Europe this year fell to 46% of the mix in the first eight months, down from 50% over the same period last year, according to figures from analysts LMC Automotive. The decline wiped out a quarter of a million diesel sales to take them to the lowest level since 2003 and forcing makers like Renault to scramble to adjust. “The market is changing very quickly,” Brieux says.

The plant’s most important engine is currently a 1.5-litre diesel used across the Alliance brands and the Mercedes A-class range. That’s built on two of its three lines, with the third newly overhauled line producing both the 1.2-litre four-cylinder and 0.9-litre three-cylinder petrol units. The push now is to make the diesel lines as flexible as the new petrol line, implanting much the same kind of technology and allowing petrol and diesel engines to be made on both. “Flexibility means the possibility to machine a crankshaft for diesel, then one for petrol, then one a three-cylinder petrol,” Brieux said. 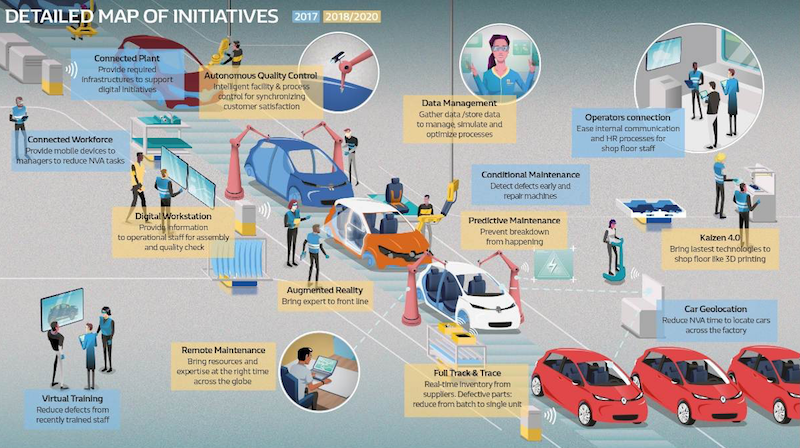 Plant advances at Valladolid, including the installation of Wi-Fi throughout the plant, are aimed at increasing productivity, reducing lost time and improving safety

The petrol line is also switching to the same kitting process as seen in the vehicle assembly hall that marries parts to a specific engine at the start of assembly and then follows it down the production line, another change that will help when the diesel lines become more flexible. The plant is also fortunate that Renault had the foresight to invest in a new foundry to make aluminium blocks for the petrol engines, announced last year as part of a wider, €600m expansion of the facility that includes adding another model to the vehicle assembly plant, as referred to above. Currently, petrol engine blocks come from Cleon in France or Pitesti in Romania, but that will change when the foundry opens next year. Diesel engine blocks come from suppliers, notes Brieux. “We need more capacity for casting as petrol demand increases,” she said.

This is a key localisation move for the plant, but not the only one. Brieux wants more of the engine plant’s 350 suppliers nearer to the factory, meaning within Spain or in nearby Portugal. Currently suppliers can be as far flung as the US and South Korea. “It’s about reducing trucks on the road and reducing stocks,” she says. Renault is planning to expand the nearby supplier park for both the engine plant and the assembly plant.