Putting the Kia into Slovakia

With its production numbers continuing to increase, the Kia Motors Slovakia facility in Žilina is flying the flag for smaller car-producing nations

A picturesque setting is not a metric that OEMs necessarily value when selecting production sites, but it is one in which Kia Motors Slovakia (KMS) scores highly. The facility lies on the outskirts of Žilina in the northern region of the country, with the Fatra mountains providing a sublime backdrop. Žilina is Slovakia’s fourth largest city, around 200km from the national capital, Bratislava, and has served as Kia’s principal car and engine production base in Europe for more than a decade.

As KMS spokesman Jozef Bačé explains, while the area was not devoid of industry, this particular site was developed from scratch. “Previously, it was greenfield – they grew potatoes here,” Bačé remarks.

These days cars are the crop, with the plant operating three shifts from Monday to Friday. The annual capacity is 350,000 units. “In 2013, for the first time, we exceeded our official capacity. In 2014 we made some changes to the line, installed additional equipment and technology, hired extra operators and we officially increased our capacity to 350,000,” Bačé explains, “Last year, we produced 339,500 and we’re expecting similar output this year.”

Historically, besides the cultivation of staple vegetables, the wider region was best known for its chemical plants and engineering operations. A prime example from the country’s communist era (while still part of Czechoslovakia), was the ZTS factory in Žilina’s neighbouring city of Martin. Originally manufacturing tractors and forestry equipment, the assembly lines at ZTS produced T-72 tanks for the Czechoslovak military and indeed all of the Warsaw Pact nations – 300 vehicles per year from the 1970s right through the collapse of the Soviet Union.

The era left a heritage of engineering and a strong education system that gave Kia firm grounds to invest in the region. “There’s a university and many vocational schools. Even after more than ten years of operation we attract plenty of visitors and business partners to see the plant,” Bačé notes. “Many students, too – every Monday and Tuesday we are open for visits from technical schools and universities. Annually, more than 6,000 will come.”

Other groups visiting the plant include managers of non-automotive businesses in Slovakia, looking to benchmark their operations to those at KMS.

Close friends“Not even 80km from here, at Nošovice [in Czech Republic] there’s a Hyundai plant. In the area between the two factories, there are many suppliers providing parts for us and also HMMC [Hyundai Motor Manufacturing Czech Company],” Bačé says. This dual-siting is a successful business model which was applied by the group elsewhere. “Also in the US,” says Bačé, “where there are two factories close to each other [in US terms, 100km]. One is in Alabama, the other in Georgia but each is close to the state border.”

He continues: “Last year we produced 339,500 cars. This year we are running at more than 1,400 per day. As for engines, it’s even higher. Daily production is roughly around 2,400, the reason being we are also producing engines for HMMC. They produce gearboxes for us.”

Bačé explains: “This model of the factory is implemented through the Hyundai Motor Group worldwide. All newly established factories are built to a very similar system. When I visited HMMC in the Czech Republic for the first time, I felt like I was at home.” 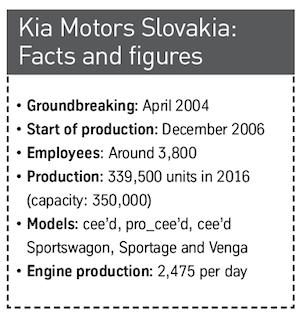 Pressing mattersThe press shop is fitted with two main press lines and a store of several 20-tonne galvanised steel coils lies adjacent to the bodyshop entrance. “We have different suppliers,” says Bačé. “Not only Hyundai Steel but Voestalpine and ArcelorMittal. Of course, the proportion of Hyundai Steel is the biggest one. Some suppliers are providing coils for specific parts but basically we tender every half-year.”

The press shop consists of a blanking line and two press lines, supplied by Hyundai Rotem, each with a capacity of 5,400 tonnes. The four-stage process delivers one of the 86 panel types every 20 seconds.

“With each set of dies we’ll make around 600 panels. Then we will change them – each change takes around 20-25 minutes. Once we set up production of the new type, the first panels in the run are checked with our 3D inspection system before we launch full production,” Bačé says.

Quality arrangements at the end of the line comprise two inspectors checking, by hand and eye, every 20th panel, referring any issues to the 3D optical inspection system.

The press shop maintenance area has two smaller presslines, one with a capacity of 1,000 tonnes, the other 2,000 tonnes. They are not used for series production but to keep the dies in good working order.

In the storage area, regular panels are placed on colour-coded pallets and moved by forklift truck. Stock numbers are indicated to the forklift drivers on the overhead panels. A green-amber-red light system allows them to quickly prioritise part lines that require replenishing.

"About 43% of all parts that we assemble here come supplied as modules. It speeds up our process… we finalise a car within six hours" - Jozef Bačé, Kia Motors Slovakia

The only exception is the side panels, their larger dimensions making them unsuitable for forklifts. Instead, an automated storage system with a capacity of around 8,000 pieces is employed. From the end of the line, an electric monorail conveyor palletises the side panels in a two-storey hangar area before continuing through to the bodyshop.

Around 360 conveying and welding robots are deployed in the bodyshop, accommodating a range of separate body types on a single line. “We are producing five different bodies but there’s scope to extend to another three in the future,” says Bačé. “That’s helpful when we are switching from an old model. We can still produce the old one for certain markets overlapping with production of a new one.”

The three-storey paintshop at KMS features tanks for 360-degree rotation-dipping for pre-treatment and electrochemical coating. Overall, each body passes through individual phases of the production process measuring 7.5km, including buffer zones. “Storage capacity for the painted bodies is 125 bodies,” Bačé says. “Essentially, that’s the stock for two hours – so if something happens in either the paint or bodyshop we have that time to work with.”

Automated assemblyRobot technology also plays its part within the 100,000 sq.m assembly hall, where 1,400 vehicles roll off the production lines every day. Automated dashboard mounting is a particularly innovative feature. As the body moves into this station, the robot anchors itself to a peg fixed to the conveyor, then gathers the full dashboard unit – provided by Hyundai Mobis – from the lineside. Turning the module 90 degrees, the robot feeds it through the right-hand door aperture. Lifting the dashboard forward and fixing it in place, the robot arm then releases and navigates itself out of the door aperture, with only 2-3cm clearance.

“A barcode tells the robot which type of body it’s working to. It will also read the barcode on the dashboard unit just to verify it is intended to be fitted inside this particular job,” Bačé explains.

It’s a prefect instance of the automation advantage, coping easily with the size, weight and awkward shape of the dashboard module as well as the limited working space. 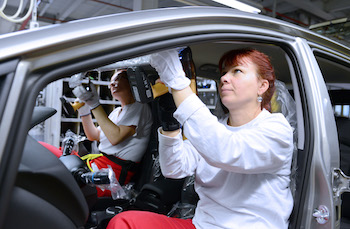 Unemployment levels have dropped in Slovakia, meaning that it may become harder for vehicle-makers to recruit suitable workers

Naturally, tight and effective timing is crucial to the entire operation. At KMS, Bačé explains, a key approach to this is a high ratio of modularisation: “About 43% of all parts that we assemble here come supplied as modules. It speeds up our assembly process. We are able to finalise a car within six hours of it arriving at the assembly line.”

Engine production Within the KMS complex, two engine plants are in operation. The first opened in 2006 to produce both petrol and diesel engines. As production at KMS and HMMC increased, a second petrol engine shop started operation in 2011. Upgrade work is planned for the original engine shop during the latter part of 2017.

National prideSales in more than 90 countries are served by the plant. The focus is mostly on Europe and Russia but vehicles have also been supplied as far as Australia and New Zealand; Mexico too, until production began there. Other markets in the Middle East and North Africa are also being explored.

“The Sportage is the most important for us. We’re on the fourth generation already and it represents 64% of our current production. It’s our cash cow,” says Bačé.

“The Venga has been our shining star for so many years. Basically, production began in 2009 in Nošovice [HMMC] then operations were switched to KMS, so we’re at eight years now and we’re pretty stable at 30,000 units per year.”

Economic importance“Automotive investment in Slovakia is important for our economy. It accounts for around 44% of the country’s entire industrial profile.” 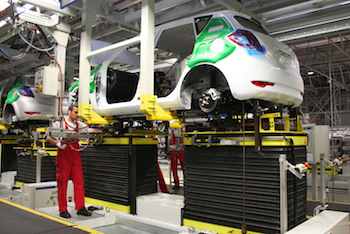 Three, soon to be four, OEMs are producing cars here, aided by 300 suppliers. The national population is around 5.4m and more than 250,000 people are employed, directly for OEMs in the country, be it Kia, Volkswagen or PSA, or through tier suppliers.

Jaguar Land Rover has begun work on a plant at Nitra, but Bačé warns that it may prove tough for JLR to recruit operatives: “Unemployment levels dropped below 5% in Slovakia. It’s even lower in the Nitra area. It will be quite difficult for them and their suppliers to find suitable staff. The situation is having an impact on wages. The pressure is increasing now; the wages rises here at KMS were above the national average. I believe it will continue.”

“We are really depending on the automotive industry, especially western and central regions. The east is a different story. The highway infrastructure is not complete yet. It’s the reason why the OEMs and suppliers are established in the western part of the country.”

Žilina is an exception, lying in the north-west. The national government is working to provide higher incentives to companies willing to establish operations in the east, especially to specific regions where unemployment is far higher than the national average. In some districts in the east and south, unemployment can reach 20%, while in the west around Bratislava it is closer to 2.5%.

Slovakia became an independent nation in 1993 after the dissolution of the Czechoslovak federal state and the nations remain fierce rivals in the automotive sphere. “We are a very small country; the output of China, US, Korea, Germany, Japan, in real numbers is much higher, but we are the number-one producers in terms of cars per capita.” With a smile, Bačé adds, “We like this statistic; it means we beat the Czechs.”