Nissan heads in a new direction

The OEM has been manufacturing vehicles in Mexico since 1966 but the new COMPAS collaboration with Daimler will add premium cars to the line-up by next year. AMS went to check on the progress so far 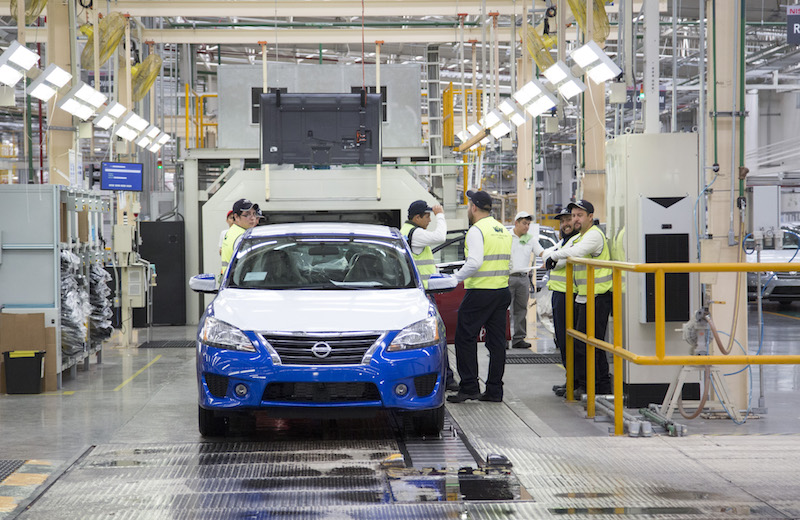 The rush among carmakers to set up a manufacturing base in Mexico will see no fewer than six new plants established between 2016 and 2019 – and precisely half of those will be producing premium vehicles. While Audi has taken the lead and was preparing for the official start of operations at San José Chiapa, Puebla, at the time of writing (late September), Renault-Nissan and Daimler are close behind with their joint project at Nissan’s vast and well-established site in central Mexico.

The $1 billion, 220,000 sq.m Cooperation Manufacturing Plant Aguascalientes (COMPAS) will build premium compact cars from next year, starting with Infiniti vehicles in 2017 and adding Mercedes A- and B-Class cars in 2018. The new factory will have the capacity for 230,000 units per year – giving Nissan the chance to achieve its target of manufacturing 1m vehicles per year in Mexico by 2018.

Construction work for COMPAS began in September 2015, near to Nissan’s A2 plant, and has so far focused on the most complex element of any car factory – the paintshop, for which the equipment is currently being installed. According to Hector Ocampo, manufacturing strategy director, the set-up will be similar to A2 and include an onsite stamping shop, though one with IHI presses that will handle aluminium as well as steel. During AMS’ visit, the press-shop structure was clearly well underway, while the floor area of the bodyshop was almost complete. Other buildings will include a plastics shop and there is more space on the 1.1m sq.m site that could be used for future expansion. In trim and chassis, Ocampo confirms that there will be one line assembling the two brands’ vehicles, at a rate of 40 jobs per hour (jph). A total of 2,300 personnel are working on the construction, including 600 from COMPAS itself. Once the factory is operational, it will employ 3,500 people and also support an estimated 10,000 indirect jobs.

The construction of COMPAS will be completed by 2017

COMPAS represents two significant developments: the strengthening of the relationship between Renault-Nissan and Daimler, which began in 2010, and growing confidence in Mexico as a location for high-quality vehicle production. At the groundbreaking ceremony last September, José Muñoz, executive vice-president of Nissan Motor and chairman of the management committee at Nissan North America, said: “Mexico is a global benchmark for quality and efficiency and is a major reason why Daimler and Nissan have decided to produce the next generations of premium compact cars for Mercedes-Benz and Infiniti here in Aguascalientes.” These vehicles will also be produced in Europe and China, but Mexico is the initial focus.

Expanding production for exportsNissan itself has been manufacturing vehicles in Mexico since 1966, when it opened its first non-Japanese plant at Cuernavaca, Morelos, to make Datsun Bluebirds. Its production strategy changed over the coming decades, however, in acknowledgement of the country’s export potential, and this led to the development of manufacturing facilities in the strategically located state of Aguascalientes, where Nissan owns 6.4m sq.m of land. The engine plant which opened in 1982 was followed by one vehicle factory (A1) in 1992 and another (A2) in 2013, which was constructed in a record 19 months and boosted the OEM’s annual capacity in the country from 680,000 to 850,000 units.

In September 2014, the Aguascalientes engine facility assembled its ten-millionth engine and in May 2015 Nissan Mexicana reached the same milestone for cars. Although its production expansion has been for the sake of exports, it is worth noting the company has a stronger sales profile in Mexico than other manufacturers; of the 431,000 vehicles it made in H1 2016 (out of 1.7m for all OEMs), 37% went to the domestic market, in which Nissan takes over one-quarter of sales. In recent years, the number of export markets for Nissan Mexicana has actually dropped from around 100 to 30, mostly due to growing demand in North America.

How fast can you make it?

According to Armando Avila, manufacturing vice-president, Nissan Mexicana, and chairman of COMPAS, A1 is the most productive facility of all 48 plants in the Renault-Nissan Alliance, when measured line for line (Nissan Smyrna in Tennessee has two). Although designed for 60jph, like Smyrna, A1 is currently running at 65jph and is the fastest Nissan assembly line in the world. Handling five models, including the recently introduced Kicks crossover, A1 turns out one vehicle every 55 seconds – 1,305 units per day.

The newer A2 plant, which focuses exclusively on the Sentra (though it could handle up to four models), operates at 32jph and produces 628 units per day. The opening of a new Nissan plant at Resende, Brazil, in 2014 has reduced the pressure on Aguascalientes. Despite this, additional equipment is currently being installed that should see A2 rise to 42jph in January 2017. Meanwhile, the engine facility makes no fewer than ten types of engines at a rate of one every 17 seconds – also one of the fastest at Nissan globally.

Avila describes the high productivity of A1 as “our gift to Japan” in return for the trust the parent company has shown to its Mexican outpost. As for the secret of its success, he says it is not the building or machinery that make the difference, but the people – especially the inculcation of a desire in every worker always to exceed expectations.

Along with supplier capacity, Avila believes that human resources are a key challenge for the industry to tackle as the “map of production” changes with the addition of those six plants between 2016 and 2019 – and an associated 43% increase to 5m units made in Mexico per year.

At Aguascalientes, it surely helps that the members of the management team have not been imported but are Mexican, in sharp contrast with most global OEMs that have established themselves in the country. In testament to its understanding of people power, Aguascalientes now takes the lead for Alliance training in the Americas, having become one of three Nissan Global Training Centres worldwide in 2012. It is, of course, training the workforce for COMPAS.

Leveraging people powerProviding more detail about how people management can impact on productivity, Ocampo says the Aguascalientes workforce is divided into two main shifts but three groups, operating from Monday to Saturday for 21.5 hours per day. This produces 5,800 productive hours each year and is the highest, he claims, in the industry. The same strategy exists at other Nissan factories but Ocampo says Aguascalientes is the location at which it has been mostly successfully implemented. One notable benefit is that it effectively increases capacity without capital investment, beyond resources for training.

The three-year-old A2 was the first plant built according to Nissan’s new global standards and makes full use of modern methods for improving the working environment, including natural lighting. The factory is relatively quiet, owing to electric conveyors throughout and an electric friction-drive system taking the bodies through the paintshop. There is also widespread use of automated guided vehicles (AGVs) for component delivery, plus large, pallet-like versions which carry the bodies themselves. There are 88 AGVs in the bodyshop, which also has 190 robots, mostly from Fanuc, providing an automation level of 72%. Another method employed by A2 for greater efficiency is a block and kit strategy, which involves an operator transferring components from storage racks into a trolley before they are moved to the line. Kits then join the vehicle bodies moving around on the AGV pallets.

A1 has the fastest vehicle assembly line within Nissan worldwide, turning out one car every 55 seconds – 1,305 units per day

In discussing the success of Aguascalientes, Armando Avila also highlights the importance of coordination with suppliers, which need to be fully engaged with Nissan’s synchronised production system, known as Douki Seisan. Aguascalientes has achieved a leading score of 99% on Nissan’s sequence measure index, and has even produced a training manual on this subject which has been adopted in Japan as well as the UK and Spain.

The original, 140-acre supplier park includes facilities for steel-maker Posco, seating specialist Tachi-S and tubing manufacturer Sanoh Industrial. In 2014, transmission supplier and Nissan subsidiary Jatco also opened a $220m plant covering 300,000 sq.m – only its second in Mexico – which can produce 400,000 units per year. Additionally, two new industrial parks have sprung up next to Nissan’s complex and will host some of the (so far unnamed) companies supplying COMPAS. 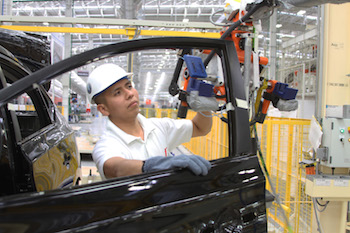 However, for the launch of the first Infiniti model, Nissan will still need to import the engines from Japan, the telematics and safety control modules from Japan and Germany, and other parts such as the starter motor and air-conditioning compressor from China. Therefore, the local content will be somewhat lower than the standard for Nissan Mexicana, which is an impressive 82%.

Given the advantages that Nissan boasts in Mexico, demonstrated most clearly at its highly productive Aguascalientes complex, the company seems well-placed to participate in the substantial growth expected over the coming years and to handle the two key challenges of supplier development and labour management. It has a long manufacturing history in Mexico, a commanding share of both national output and domestic sales, existing export patterns and will soon break the 1m-unit barrier to cement its position as one of the largest and most important manufacturing operations in North America. Moreover, by next year, the premium COMPAS operation will add a whole new dimension.