The South Korean OEM has just opened a state-of-the-art factory at Pesquería in Mexico, but political problems are preventing this first Latin American manufacturing base from reaching its full potential 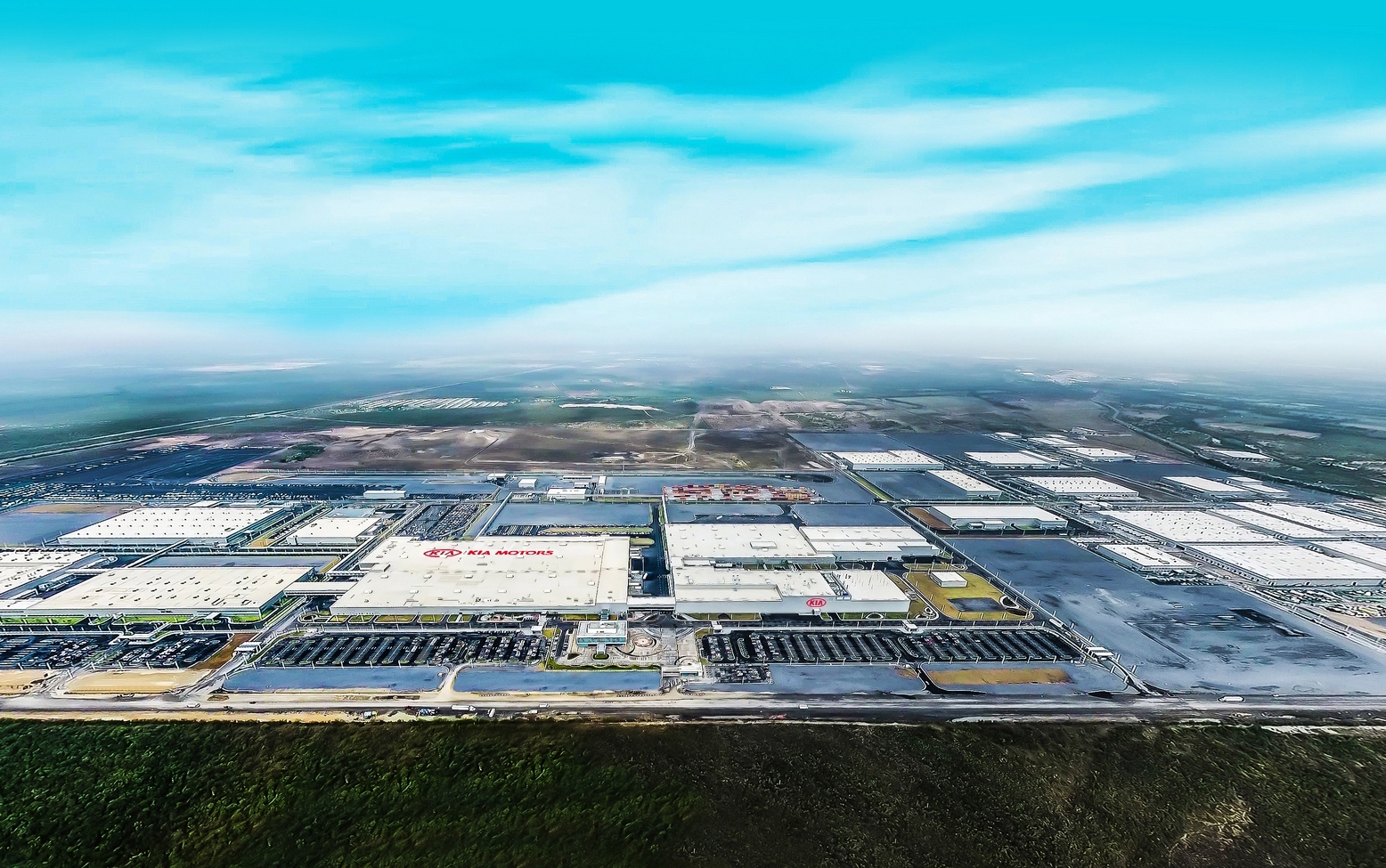 A sun-scorched hilltop in Monterrey provides the perfect view of Kia Motors’ first Latin American factory: a gleaming white press shop, bodyshop, paintshop and assembly hall covering 273,000 sq.m on 5m sq.m of land in the north-eastern state of Nuevo León. Kia Pesquería was completed in an astonishing 13 months – quick by industry standards but also a record for the OEM worldwide. In fact, the hilltop played a part in this, by hosting the helipad that was used to bring in the giant structural parts of the press-shop machinery.

Kia’s spokesperson at the plant, Victor Alemán, explains that the rapid completion of the project was achieved by bringing in several thousand Korean engineers, technicians and executives to execute the intensive construction phase, before leaving behind a core of just 200 to train around 3,000 local recruits in the operation of the plant. The might of the parent company, Hyundai Motor Group, was also a contributory factor as it gave Kia instant access to a raft of subsidiary services in steel, engineering, construction and logistics. Essentially, both human and material resources for the new plant were dropped into Monterrey as soon as Kia received the go-ahead from the government.

Many states in Mexico offer incentives to automotive OEMs to set up local operations, so it is interesting that Kia chose Nuevo León over a well-established light-vehicle production hub like Puebla or a developing region such as Guanajuato; besides truck factories, Kia is alone in Nuevo León. Beyond the logistical benefits offered by Mexico as a whole, such as ports both east and west for access to Europe and Asia, Nuevo León is very close to the US, even sharing a short stretch of the border. Since 60% of the output from Kia Pesquería is destined for the US and Canada (with the remainder split equally between Mexico and the rest of Latin America), this is a significant advantage.

Kia completed the construction of its 273,000 sq.m Mexican plant in just 13 months – a record for the company worldwide

Or it would be, if Kia were not experiencing difficulties with the local authorities. A new state government has been installed and is attempting to claw back some of the incentives which lured the OEM to the area in the first place. The rate of infrastructure development has slowed and, most importantly, the factory still lacks a rail spur to ship its output to the US. Alemán says this has not caused Kia to suspend production, which began in May, but the OEM has been obliged to use trucks to transport its cars to the nearest main station and also to clear extra storage space outside the plant. He does, however, believe that the two sides could be close to reaching an agreement. Given that Kia’s new factory is predicted to create 14,000 direct jobs and 56,000 indirect jobs, and already employs 67% of Pesquería’s population, such a resolution would be mutually beneficial.

The bodyshop has an automation level of around 85%

Since Kia has opted to pioneer car production in Nuevo León, another challenge is the lack of a strong supply base. The OEM is currently importing 60-70% of components from Korea, although it aims to reduce this to around 50%. Quite probably this is something that Kia will be able to change fairly rapidly, again with the support of the vast Hyundai Motor Group. Indeed, Kia’s $1 billion vehicle factory has already been joined by the facilities of numerous suppliers, such as Hyundai Steel and Hyundai Powertech, representing a total investment of around $3 billion. Onsite, there are 13 tier ones which deliver key components – for example, seats from Hyundai Dymos – directly to the line via overhead, electrical conveyors.

Ramping up the technology levelNot only the logistical aspects of Kia’s new development are highly impressive; technologically, as well, the factory is state-of-the-art. In the stamping shop are two Hyundai Rotem presses which, at 18 metres tall, weighing 3,862 tons and with a combined pressure of 50,000lbs, are the largest of any Kia plant worldwide. Together, they are currently performing 18,000 strokes per day and processing 107 tons of steel, but they will be able to run even faster when the factory reaches full capacity of 400,000 vehicles per year; at the time of AMS’ visit in early August, it was operating just one shift and turning out 600 Forte (Cerato) sedans per day. The press shop was already producing stampings for the hatchback version to be added shortly; the parts waited in racks for the bodyshop to get up to speed. At the official inauguration of the factory on September 8, Kia announced that Pesquería will also build the fourth-generation Rio, due to have its world premiere at the end of that same month.

In total, the plant boasts 420 robots and the bodyshop is particularly highly automated. With few personnel in sight, the welding operations are conducted by over 300 robots – mostly Hyundai Wia but also Kuka and Fanuc – which give an automation level of 85%. The human workers are limited to checking joins and adding a small amount of welding where necessary. The automated processes are shown in multi-dimensional perspectives on large screens alongside the walkways; similar depictions, displays and diagrams are found throughout the plant, in further evidence of the technological sophistication, high level of organisation and attention to detail which characterise the new plant. This is clearly part of the culture of the company, and Alemán, for one, believes that “something good” will come out of this combination of “Korean discipline and Mexican passion”.

The paintshop, though off-limits during AMS’ tour, covers three storeys and again most of the robots come from Hyundai Motor Group’s own supplier, Wia. The painted bodies are transported to the assembly hall by the overhead conveyors which link all of the factory buildings.

As is usually the case, the automation level drops considerably in the assembly hall. Given the high technology elsewhere and the wide, straight walkways in assembly, it seems strange that Kia Pesquería is not using automated guided vehicles (AGVs). Partly, this could be because the overhead conveyors bring key parts so close to the line, but there is surely scope for the implementation of AGVs in the near future. For now, the lineside kits are replenished by workers manoeuvring trolleys. Nor does the plant use the ergonomic chairs which are seen in many US factories. According to Alemán, Kia’s own research suggests that standing and moving around is healthier for personnel. The assembly crews are differentiated as operators, team leaders and suppliers by their coloured shirts; red, blue and green respectively.

Leaving room for HyundaiOne vehicle now rolls off the assembly line every 53 seconds, meaning around 68 vehicles per hour. Although the factory is currently operating only one shift, it will add a second and third in 2017 to reach full capacity by 2018, turning out more than 1,000 vehicles per day. Kia expects to make around 110,000 vehicles by December this year. Once fully up and running, Pesquería will account for 10% of Kia’s global manufacturing output – which will total 3.56m units – and boost the overseas contribution to around 50%. The OEM has not released its plans for the production line-up beyond the Forte and Rio, but Alemán says that Pesquería is capable of producing up to seven different models.

The vehicle-maker previously stated that it did not intend to manufacture Hyundai cars at its new Mexican site. But what it really interesting about that spectacular view from the hilltop is the space directly in front of the existing buildings: exactly the right size and shape for a mirror-image plant. It is not a lack of funds that is holding up the development of a Hyundai factory at Pesquería, but the same local politics which are currently stopping the impressive new Kia plant from achieving its full potential. One hopes that this problem will soon be overcome, so that Hyundai Motor Group can continue building a whole new world of light-vehicle manufacturing in Nuevo León, which might one day rival Guanajuato or Puebla.