The north corner of Audi’s vast Ingolstadt plant has been transformed into a three-storey, environmental and ergonomic exemplar of the automotive paintshop 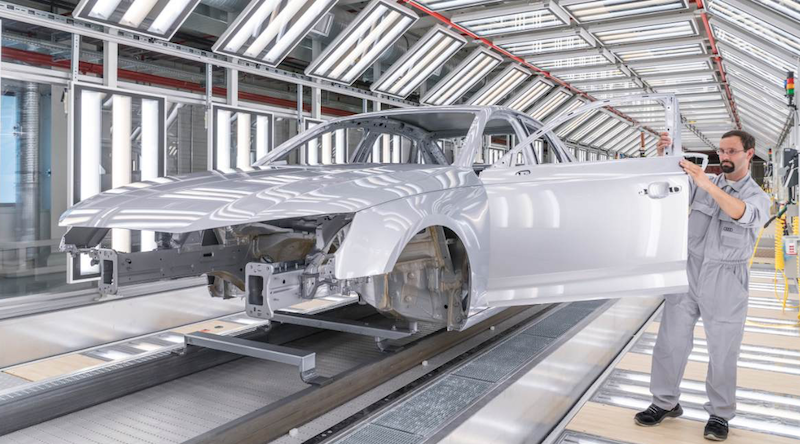 Construction of the 12,000 sq.m facility began in April 2014 with series operation beginning just two years later in spring of this year. Now, the lines handle Audi A4 and A5 models with A3 and Q2 set to be added in the near future. A target daily capacity of approximately 900 cars per day is set for end of 2016. 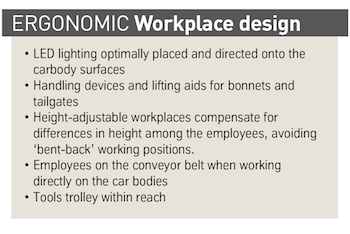 Audi is keen to herald the new paintshop as one of the most environmentally-friendly in the world. The claim stems from the site’s state-of-the-art technology for functions such as air recirculation, dry separation and exhaust air cleaning – measures that allow significant reduction in consumption compared to previous operations.

Heating energy and water consumption rates per car have been reduced by 20%, and an air recirculation system upgrade is helping to reduce CO2-emissions per painted car by 30%. The cleaning of exhaust air has seen VOC emissions fall by 90%.

With the construction of the new paintshop, Audi has placed great importance on achieving high standards of resource efficiency and ecology, a point emphasised by Prof Dr Hubert Waltl, a member of Audi’s board of management for production. “Sustainable operations have high priority at Audi. That’s why we are continually developing our production technologies,” he says. “This is the only way for us to live up to our high demands in terms of quality, environmental compatibility and energy efficiency.”

Another consideration in the planning of the new paintshop was for the facility to show that technological advances and progressive working conditions are not contradictory aims. “The Works Council campaigned for this new paintshop. It is an investment in the future and thus a further commitment by the company to the main Audi plant in Ingolstadt,” adds Peter Mosch, chairman of Audi’s Group Works Council.

The so-called ‘bell-bell’ method is supplied by Dürr, as are the site’s robots, application technology, cleaner, scrubber and waste air purification system. In the bell-bell method, paint is applied only electrostatically, thus achieving higher efficiency; for example, 5% less waste in the shape of paint sludge is created for each car that is painted. The complete topcoat painting process for an Audi model lasts about three hours. The car bodies pass through three stations for the application of filler, basecoat and clear paint. After each step of the process, the painted car bodies move through a drier.

Audi also places great emphasis on efficiency with this equipment. The energy required for a constant temperature in the drier cabins is optimally adjusted to the number of car bodies to be dried. Hot air passes through special air vents pointing towards the car bodies.

“A bonnet is about 12kg, somebody lifting one 200 times in a shift equals three tonnes. So we asked ourselves, how can we make the process easier for line workers?” – Andreas Lehe, Audi

Gaining intelligenceThe new topcoat line is also a further component of the fully connected intelligent plant of the future, the smart factory. For example, a big-data robot measures the painted automobiles at more than 100 separate points. Analysts use the data on quality collected in this way to compare with existing process data. Elsewhere, conditions such as temperature and humidity can be monitored and compared with the outside conditions and appropriate adjustments made. Touchscreens provide the employees with the collated data in direct and indirect areas, meaning all of the departments involved in the production process are connected.

Automated quality control takes place using a cell equipped with measuring robots and systems for colour tone, coat thickness and coat structure. It also collects statistically relevant quality data on the painted car bodies, which is compared with the process data from the painting equipment. A centralised paintshop control area provides all the data from the production process for use in real time at the plant and office levels.

Another electronic quality inspection records all quality-relevant data on electronic touchscreens at the workplaces. The quality control loops are therefore efficiently organised.

Almost two decades later, he is now responsible for this ulta-modern, environmentally-friendly upgrade. When it comes to suppliers, Lehe sees the field as a narrow one but Audi’s other sites offer vital guidance.

“We benchmark with the other premium companies, BMW and Daimler, so there are not that many suppliers in the paintshop industry, only two or three, that can take on such a project,” says Lehe.

“We looked at their experience. We asked ourselves, what do we want from the project, can we save money but get that same level of quality.”

Of the new technology, the bell-bell application allows a painting process that is said to be 75% more efficient. The painting process is carried out fully automatically by state-of-the-art paint-application equipment with robot technology and solely electrostatic high-speed rotation spray guns. 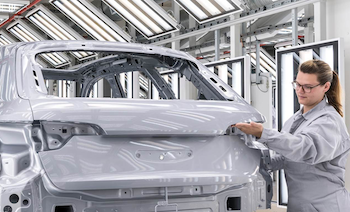 Despite extensive automation, there is still a place for inspection by an expert’s trained eye

Lehe says: “It was also important for us to know if we [had] tested this technology at another factory. We looked to use the same technology at each of our paintshops. If we have an application in the base coat or primer at an existing plant then we can introduce it at Ingolstadt. So we can also look at the total cost of ownership, how many spare parts do we need for the installation, what about quality and materials?”

“The suppliers were engaged during the design process. First we went to the workshop guys, the production guys and the planning department to ask what our targets are for a new paintshop: where do we want to go and what is the biggest aim of this paintshop? What is the advantage we are looking for and what is the cost of this process? After we decided the aims and the technology to meet it, we found out who could supply it. We asked each about their solution and made a decision.”

Built to lastLehe explains that the emphasis on information is a key move to future-proof an area of production which is less likely to see frequent upgrades. “When you build a new paintshop, you have it for 20 years,” he says.

“This is the unique problem of the paintshop – if you go to the assembly line or the bodyshop, they get new installations with every new model. They can progress with technology far more frequently. For us, the problem is that if the installation is fixed, you can’t change the process. So when you make a decision about the paintshop you have to look much further ahead.” 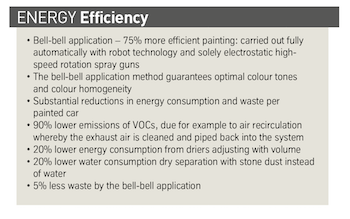 “A big change for us in the last 20 years has been the speed of the progress in technology. It’s getting faster and faster. When you see the paintshop we built 18 years ago, we had all manual paint sprayers because we changed from solvent-borne material to waterborne material. We decided not to change too much and to work the interiors with manual sprayers. Then we saw the process wasn’t consistent so we decided to automate it. Nowadays, it is normal that all paintshops are fully automated.”

Underlining the ergonomic design, handling devices are used, such as lifting aids for car hoods and tailgates, while height-adjustable workplaces compensate for differences in height among the employees, avoiding ‘bent-back’ working positions.

Employees move on the so-called ‘worker conveyor belt’ when they are working directly on the car bodies. Instead of using static tool stations, items such as polishing machines and paste are always within reach in the trolley carried next to them.

“We ask how can we make the process easier for workers, can they find the faults and defects? For example, a bonnet is about 12kg so lifting one 200 times in a shift? That is 3 tonnes they might have two push up every day,” Lehe exclaims. 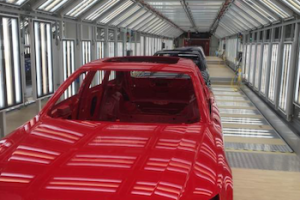 The company emphasises its belief that economy and environmental protection are not mutually exclusive – quite on the contrary. The new technologies render a range of operations sustainable, secure capacity and reduce CO2 emissions and energy consumption, delivering Audi savings amounting to 30%.

While the claim to be the world’s most environmentally friendly paintshop is one heard from other sites, not least Audi’s own at San José Chiapa, this new facility undoubtedly represents progress.

“What is very important to us and our customers is to have clean cars and clean factories,” summarises Prof Waltl. Considerate handling of resources and the environment is more important than ever before. At the same time it is crucial for us to make sure that the working conditions and ergonomics can be addressed and improved. This is the reason we have invested in this facility.”