Having made more than 1m Mercedes-Benz cars at its Beijing factory, BBAC is proud of its place in the Daimler portfolio. AMS travelled to China in order to tour the largest Mercedes-Benz car factory in the world 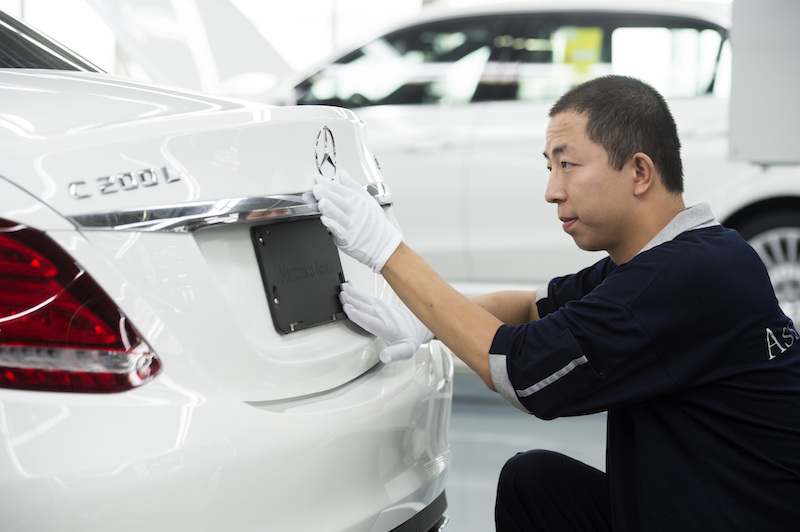 In 2016, over two-thirds of the Mercedes-Benz passenger vehicles sold in China were manufactured at BBAC. Across the E-Class, C-Class, GLA and GLC SUV, its total local production output passed the 1m-unit mark in November last year. The fondness in the Chinese market for long-wheelbase versions of the E-Class and C-Class has underpinned much of this success. Beyond that, the range of production at BBAC, encompassing front- and rear-wheel-drive vehicles, sedans, SUVs, engines and compact cars, is allowing the Beijing team to demonstrate its versatility.

The vast site means that all automotive manufacturing functions are covered. The press shop has an automated, closed-end, multi-link line with one 2,000-ton and four 1,000-ton punching machines. In the bodyshop, welding lines operate to an automation rate of 80%, equipped with spot welders and MIG/MAG welders. Assembly and welding quality adheres to Mercedes-Benz’s global quality standards, carrying through to a state-of-the-art paintshop. Each stage of production at BBAC is designed to adhere to the Mercedes-Benz universal quality standards that apply along the entire value chain. A contributory factor to this is an ongoing knowledge transfer between the competence centre in Sindelfingen, Germany, and BBAC.

A further instrument is the quality feedback loop system. This consists of four circles alongside production and targets identifying and solving potential issues during the different stages. Each loop focuses on the control of a particular stage of the added-value of the product in the manufacturing process. Quality management begins even earlier. For example, there is strict management of local suppliers, which currently number more than 300. Additionally, there is an emphasis on strong teamwork between quality, engineering and production.

• By area, BBAC’s Beijing facility is the largest Mercedes-Benz car factory in the world

• The plant is also the only Daimler JV to accommodate MFA, MRA and MPA products at the same site

Training is another key focus, particularly as the workforce has more than quadrupled in the 12 years of operation. Now, with more than 11,000 employees, a prominent asset for BBAC has been both training in China and abroad. This includes intensive and continuous on-the-job training and knowledge transfer from the international training programmes. In preparation for the ramp-up of the all-new long wheelbase C-Class, around 3,000 personnel were certified. An initial 200 were sent to train at Mercedes-Benz plants in Bremen and Sindelfingen. On returning to Beijing, these 'multipliers' then passed on their knowledge to colleagues.

Advanced and flexibleFor the locally produced GLA, the BBAC NGCC plant has become one of Daimler’s most advanced operations. The NGCC factory has an assembly area with a flexible conveyor chain system suitable for the mixed production of multiple models and a programmable logic control (PLC) conveyor system. It can accurately position and assemble engine, chassis and car body for five different models, future-proofing the operation for an accelerated pace or expanded production volume. Production equipment, manufacturing and management processes have been integrated along the lines of the plants at Rastatt in Germany and Kecskemet in Hungary. It took ten months from the groundbreaking in March 2013 to the entry of facilities at the turn of 2014. Formal operations began one year after.

Plaudits from Germany have come in the shape of a prestigious industry award. Earlier this year, BBAC was recognised for excellence in large series assembly in an international competition jointly organised by a business publisher and a management consultancy in Germany. The award was based on the demonstration of best practice for efficient material flow, a sophisticated logistics concept together with the local experience of the Chinese partners. A consistent implementation of the well-established Mercedes-Benz production system helped to ensure that the location was able to develop dynamically. Observers were introduced to the lines to ensure compliance with standards directly on the vehicle, to push for continuous improvement in the process and to solve any problems.

In manufacturing and assembly, BBAC wanted to go a step further on digitisation and the principles of Industry 4.0. This included actions such as individual pilot projects in engine production, assembly and engine manufacturing. In the latter, machines and processes were digitally networked, with parameters and operating conditions set and errors and warning protocols established. To make best use of this flow of data, several applications were developed step by step. The aim was to avoid impending plant failure, optimise machine maintenance and predict potential faults. Energy reduction was another area under scrutiny. All of these activities have quickly helped to make BBAC’s organisation leaner, faster and more efficient, under the banner of ‘One Quality – One Team – One Standard’, meaning that the plant can stand as an equal with the others in the Daimler portfolio. 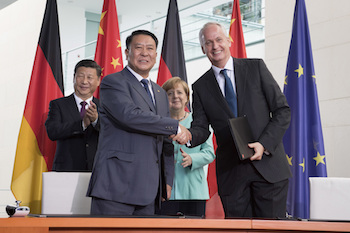 A framework agreement between Daimler and BAIC Motor will pump in an investment of 5 billion yuan ($770m) to manufacture all-electric vehicles under the Mercedes-Benz brand, powered by batteries produced at the BBAC complex. Daimler sees the agreement as “laying the groundwork for BBAC to become a future EV production hub in China”.

The significance of the deal stretched beyond automotive industry circles, with German Chancellor Angela Merkel and Chinese President Xi Jinping attending the ceremony held in July 2017 to announce the new framework agreement.

BBAC’s current R&D centre, opened in 2014, is the largest of its kind at a Daimler joint venture. The centre carries out standard production projects as well as component and vehicle testing. Several hundred engineers assist with production tests in cross-functional teams and there is a focus on locally produced vehicles. The centre houses numerous test laboratories and benches. Specialist teams can carry out off-line testing for homologation, training and installation tests.