One of the most interesting plant revivals in the last 12 months has been Renault’s overhaul of its factory in Dieppe, which now builds the A110 sports car. Nick Gibbs reports

This is the home of Alpine, the revived sporting brand that Renault may or may not expand to become a premium marque in the way that Groupe PSA has done with DS. Since December 2017 Dieppe has been building the Alpine A110, a retro-inspired, two-seat sports car that is constructed like nothing else in the Renault Nissan stable. This is what makes the factory so interesting.

Rather than adapt a platform from one its current models, the Alpine uses a system that’s more common at sports and specialist vehicle builders across the channel in the UK than in France or on the continent. The A110 uses a bonded and riveted aluminium tub onto which body panels are also bonded – a set-up used by Lotus, Aston Martin and more recently the London taxi firm, LEVC. Lotus is the common denominator here. The revival of Alpine started in 2012 when it was announced that Renault had gone into a 50/50 partnership with niche UK sports car firm Caterham. Caterham makes highly advanced copies of the old Lotus 7 and wanted to expand its range to include a sports car that could compete with modern Lotus models.

France’s IT outsider trusted on transforming Renault from the inside<

This unlikely partnership between the French giant and the British minnow collapsed in 2014, but Renault decided to keep the project going and the framework for the car had already been established. “The choice of aluminum goes right back to Caterham. It was decided quite early,” says Sebastien Erphelin, interim managing director for Alpine Cars. “It was a big challenge for us because it’s the first time we have bonded and riveted aluminium bodies in any of our plants. [However] aluminum was the best balance between weight reduction and the perceived quality of the body panels, which was very important.”

A plant with historyThe introduction of the A110 has finally given Dieppe a purpose after years of carrying out jobs that could quite easily have been done elsewhere. The plant was built to 1969 to build cars for Alpine, which was created in 1955 by local motorsport aficionado and Renault dealer Jean Redele. He named the brand after the mountains where he had successfully rallied his Renault-based cars. Alpine became part of Renault in 1973 and its Dieppe site has been used to assemble limited-run sports models for Renault ever since, even if the Alpine name has only been used sporadically.

The plant sits on the outskirts of the town and its valley location is too hemmed in to ever expand into a major production facility. From its heyday making the original A110 in the 1960s and 70s, Dieppe settled into making mainly hot hatchbacks and the Clio Renaultsport (RS) is still assembled there from parts sourced from other Renault plants. Dieppe has no press shop, so the Clio bodies are stamped and built in Flins, near Paris, where the main Clio factory is. The cars are then painted and assembled in Dieppe, and last year the plant turned out 4,385 of them.

RS production could just as competently be carried on the main Flins production line and, indeed, when Renault came to replace the bigger Megane RS, the new model was moved out of Dieppe to the Megane line in Valencia, Spain. “It started at the same time at Alpine, and we couldn’t have two start-ups at the same time,” explains Pierre-Emmanuel Andrieux, the Dieppe plant director. Dieppe was even given production of a version of the electric Bollore Bluecar, which started in 2015 but has since stopped.

The A110 uses a bonded and riveted aluminium tub

A plant revivedNow, though, Dieppe has a real purpose – production of the A110. Renault spent €35m overhauling the plant for production of the new sports cars, including €12.7m on the paintshop, €7.7m on assembly and €10.7m on the bodyshop. Outside, a tiny but demanding test track has also been constructed. Annual capacity at the plant is a maximum 6,000 A110s on one shift per day, five days a week (and Alpine won’t add a second – see interview with the plant director). It is currently well below that at 15 cars a day, despite orders for the car stretching forward up to 14 months. The initial 1,955 Premiere launch cars sold out almost instantly, in part thanks to its appealing looks and despite a price tag of more than £50,000.

As production of those models comes to end, orders are now being taken for the two standard models – Pure and Legend – and demand remains high after the car’s driving dynamics were widely praised by reviewers worldwide. A slow ramp-up to 20 cars a day is now being put into place to try and reduce the waiting time. This steady approach is to make absolutely sure the quality doesn’t slip. “Currently our first priority is quality, and our second and third. Then we talk about quantity,” Erphelin says.

Brit-style bodyshopThe aluminium parts arrive from suppliers across Europe. The body panels, for example, come from Cecomp in Turin, Italy, a coachbuilder that also makes aluminium parts for Aston Martin and made the bodies for the Bollore Bluecar. Alpine also sources extruded and anodised aluminium parts from Norwegian giant Hydro, which bought out extrusion specialist Sapa in 2017. Sapa also supplies aluminium parts to LEVC in Coventry, UK, for the London taxi. The new plug-in hybrid taxi is built using the same method, the idea for which came from a former Lotus employee.Walking around the bodyshop however, it is clear this is a more high-tech operation than that of Lotus or even Aston Martin, with what must be approaching 50% automation. Five Kuka robots work alongside 70 employees gluing and riveting body parts, which are then transferred to an oven for curing. Each body requires 800 rivets and 6kg of glue, so the work is shared between employees and robots.

"Currently our first priority is quality, and our second and third. Then we talk about quantity" - Sebastien Erphelin, Alpine Cars

The chassis is built in three parts. Two frames made of braced, box-section aluminium are constructed and attached to a central tub, one to the front, one to the back. These frames to carry the suspension and engine (a Renault-sourced, 1.8-litre turbo that sits behind the driver). The chassis, without roof structure or body panels, is then carried on its dolly by an autonomous carrier, made by Swisslog, to one of two Belmeko ovens and deposited inside. These ovens heat to 180°C to set the glue. Once finished, the chassis is pushed on its dolly, guided by tracks in the floor, to have its roof attached. Any excess glue is then removed.

Off-site pre-treatmentHere is where the process gets somewhat less efficient. Renault might have spent over €12m on upgrading the paintshop at Dieppe, but that didn’t include a cataphoretic bath, so the bodies are taken by lorry 100km down the coast to Sandouville, where Renault makes the Trafic van. The cataphoresis process includes a second trip to an oven, which further hardens the glue.

Returning to Dieppe, the bodies head into the revamped paintshop, where Renault has fitted two robotic systems, which it says are unique to its production network and illustrate the premium levels to which the company is prepared to go with Alpine. The first features a pair of Yaskawa robots that are mated to an Asis system that sands down the bodies, which Renault says removes the likelihood of getting that unwanted orange-peel effect on the paintwork. The system automatically changes the abrasive pad when it’s done. Meanwhile another robot wipes down the whole body. However, much is still done by hand here – Alpine says a ‘unique’ varnish is applied manually, for example, and a total of 70 staff work in the paintshop. The Clio RS models are painted alongside the Alpine cars and then both head down the same assembly line together.

Some 80 staff work in assembly, where the process is more conventional and not quite so high-tech. There’s no in-line kitting, for example, where the parts travel alongside each car to reduce the amount of time spent moving parts about and cutting walking time for operatives, something Renault is rolling out globally. Robots aren’t much in evidence either.

There are more stations for the Alpine than for Clio along the production line. “The quality expectations for Alpine are very high, which is why we have some work positions dedicated to just Alpine,” Andrieux says. After assembly comes the finishing and inspection, which takes place in a surprisingly large space given the compactness of the factory. A long light tunnel allows a thorough check of the paintwork and is a reminder again of just how obsessed with quality they are, and netting covers the outdoor storage area to stop Dieppe’s multitude of seagulls from perching (and worse) on the finished models.

It’s a long production process, taking one and a half weeks to build an A110 from start to finish. But Renault fears that increasing the pace to quickly could end up tarnishing a brand pitched as a more premium, exclusive offering. As for th future models – an SUV perhaps? – management is not saying. “It was quite a significant investment to launch the brand, and now we have to show we are able to have customer satisfaction. Only then we can write the story,” says Erphelin.

No movement on the single shiftPierre-Emmanuel Andrieux has overseen the Dieppe plant since September 2017 having previously been in charge of industrialising it to accept the A110. “So, I know the car by heart,” he says. The former Faurecia man tells Nick Gibbs why Dieppe will only ever have one shift.

You’re increasing production from 15 to 20 cars a day. What will you need to do inside the factory to achieve that?Not that much. What is important is quality. We need to make sure we have all the quality basics, that people are correctly skilled. We don’t want to go too fast. Quality first – that’s why we agreed on 15 a day and then, step-by-step, we go higher.

So, it’s just a matter of decreasing the time on each station?Exactly. Also hiring people and putting them into the right jobs. Technically not that much. 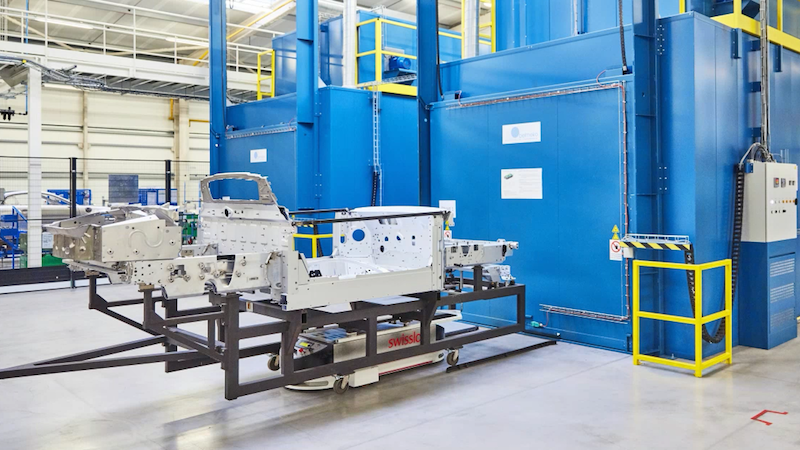 A finished tub is transferred to an oven for curing

You don’t need to put another shift in?No. We run one shift and we will keep one shift. We will only ever do one shift.

Even with orders backed up for one year?A second shift would be too risky in terms of quality. It’s really important to have the right staff. It’s not only the people, but the supervising functions. As soon as you have a technical issue, we have the expert right away on the shopfloor. This is why we keep one shift and the supervisors work at the same time and same schedule as the operators.

Training costs a lot?Yes. 140 hours to train one guy. It’s really, really important to keep the expertise. We have some experts in some fields that it would be time-consuming to find again. That’s why we keep one shift and it’s enough. Ensure quality first.

Did all the 150 new staff go through the same 140 hours of training? Yes. The typical [training] time in Renault is maybe 70 hours.

Wouldn’t shifting out the Clio RS free up more capacity?If we stopped making Clio we wouldn’t be able to make more A110s. Alpine production is not blocked because of the Clio RS.

It’s a low-volume car. How do you ensure it’s not too expensive, so you won’t make a profit?I won’t tell you all my secrets, but we have a sports premium car. We do only what is necessary, but what we do we do it correctly. So, when you see carbon fibre [in the cockpit] it is real carbon fibre. It is not fake. This is part of the answer.