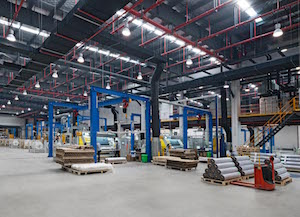 China – The factory, which took a year to build, is the company’s second in the country and is now manufacturing the interior materials Acella Eco and Acella Eco green. Series production began at the end of 2015.

The Continental subsidiary invested €40m ($45.2m) in the first phase of the project – the largest investment in its history. The workforce currently stands at 100, although an extra 50 personnel will be added over the coming months. According to Benecke, there is a high level of automation at the plant.

“This [investment] underlines the great importance of the Chinese market for us, as well as the excellent relations that Benecke-Kaliko has with its partners in the local automotive industry,” said Dirk Leiss, CEO of Benecke-Kaliko.

The new plant has doubled the company’s capacity to make Acella in China, enabling it to meet high local demand. Operated by Benecke Changshun Group, a joint venture between Benecke and Jiangsu Changshun, the factory will produce around 10m sq.m per year of the surface material Acella Eco, which is used mainly for vehicle seats and arm rests. The facility will be expanded in a second phase, depending on demand.

Benecke-Kaliko has been manufacturing in China in collaboration with its joint-venture partner since 2005. At its Zhangjiagang site, Benecke-Changshun Auto Trim makes Xpreshn and Xpreshn HD compact and expanded foils, plus Acella trim and upholstery material. The joint venture also operates an R&D centre in Zhangjiagang, tasked with improving production processes and product development for the Chinese market.