The transfer of the Jeep Cherokee production from Ohio to Illinois was the first part of FCA’s response to the growing demand for more SUVs. Mike Farish reports 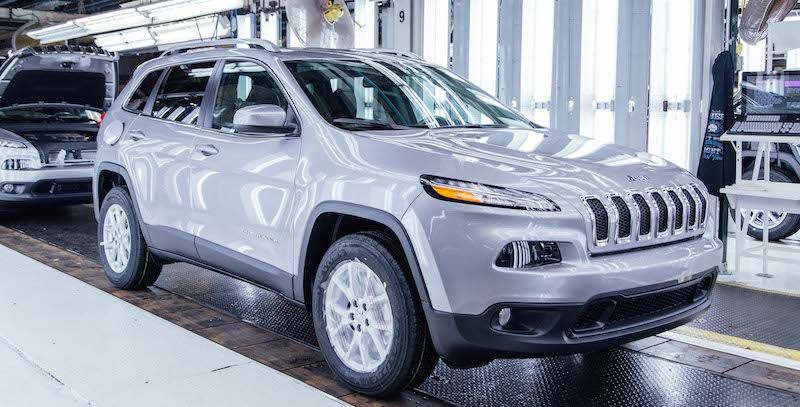 On 1 June last year production of the FCA Jeep Cherokee began at the company’s plant in Belvidere, Illinois, after transferring from its previous home in Toledo, Ohio. But the move marked much more than just the relocation of a particular vehicle manufacturing programme. Instead it was the first instalment in what is ultimately intended to be a $2.5bn plan to reconfigure the whole of the company’s US operations in response to a perceived shift in consumer demand away from small cars and towards trucks and SUVs. Moreover at a cost of $350m the move also represented a significant outlay in its own right that involved both major retooling of the Belvidere plant and a conscious attempt to use the occasion as an opportunity to introduce a marked ‘culture change’ aimed at altering employee experience in areas ranging from shopfloor ergonomics to new personnel induction procedures.

A major element of the retooling involved the plant’s 965,000 sq.ft south body shop, which was completely overhauled to create a ‘white space’ to accommodate a set of completely new activities. Specifically, four sub-assembly stations, including dashboard and centre floor assemblies, were transferred to the site from FCA’s central stamping location in Warren, Michigan, a move aimed at allowing not just for better dimensional quality control and but also cost reduction through elimination of the need to ship the closures in from an external source.

Belvidere’s new ‘glass cell’ for installation of the front and rear windshield; once a manual process, now a fully automated one

Continuity was, however, the hallmark of the way the plant’s 702,000 sq.ft north body shop was treated. This facility was only added to the site in 2011 as part of a $700m investment to produce the Dodge Dart. It is 92% automated with 650 welding, 100 sealer and 200 materials handling robots. The key factor enabling it to remain largely untouched is the degree of commonality between the Dart and Cherokee vehicles – both share the same Compact US Wide architecture. In contrast the south body shop previously produced the quite distinct Jeep Compass and Patriot vehicles. The site is now devoted entirely to Cherokee production.

Elsewhere another enhancement to the site’s facilities has been the addition to the 700,000 sq.ft paintshop of a new polish deck fitted with a lighting system that adjusts automatically to the paint colour or reflectivity of vehicles passing through it. FCA also makes the point that the soy-based formula is more environmentally benign than chemical-based counterparts.

But the assembly operations are where FCA claims the most significant transformation of the plant has occurred. For instance, it has seen the introduction of two systems aimed at facilitating operator procedures in line with FCA’s World Class Manufacturing (WCM) methodology in which a key aim is the creation of a 60-degree area immediately in front of the operator that allows them to build the vehicle with extreme precision. These are, respectively, the support now provided to assembly procedures by ‘skillets’ and ‘limos’. 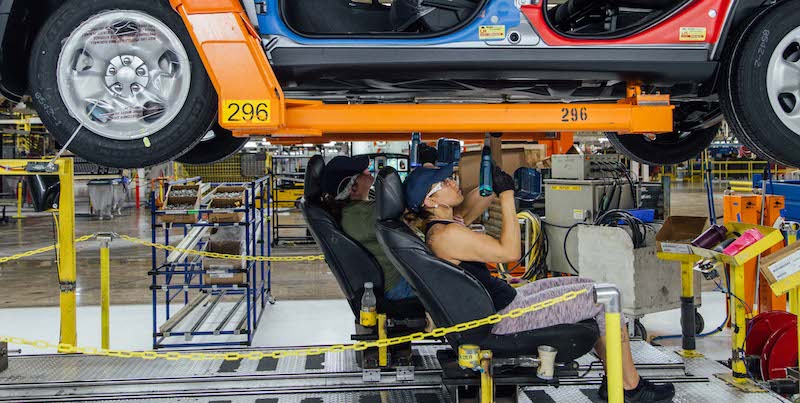 From start to finish, it takes about 28 hours for a Jeep Cherokee to roll off the line at Belvidere

On the first of those counts two new skillet conveyor lines comprised of 82 skillets run through the assembly area. Described as looking like the bellows of an accordion they carry the vehicle down the line on a moving track and are adjustable in height from 13-52 inches. By delivering parts to the operator in the optimal position the technique provides benefits including enhanced line of sight for operators and optimised use of available floor space. Meanwhile the 80 ‘limos’, all of which have been designed and built in-house, travel with each vehicle down the line and contain the parts operators will need to carry out assembly procedures at successive stations.

The plant now runs six days a week with nearly 5,000 employees assigned to one of three crews that work four ten-hour days on two shifts for a total of 120 production hours per week. From start to finish, it takes about 28 hours for a Jeep Cherokee to roll off the line.

Moreover, employee involvement in determining how the plant should implement Cherokee production has been one of its key characteristics from the earliest planning stages. That process began in October 2016 when a cross-section of 150 employees took part in a week-long offsite workshop in which they not only received training in the company’s WCM concept but also addressed ‘soft’ issues such as new employee induction procedures. Since then relevant similar work has continued at the plant in a dedicated space known as the ‘incubator’, described by the company as a ‘problem-solving hub’ where employees can meet and find the resources needed to support specific initiatives.

Belvidere Assembly was, in fact, only the second facility in North America to implement the incubator concept after its inception at Jefferson North Assembly Plant in Detroit. So, a little over a year on from the start of operations in the reconfigured plant how does the company feel things are progressing?

“While the retooling provided a significant opportunity to implement physical changes to Belvidere Assembly we maintained a focus on the implementation of WCM principles,” states Tomasz Gebka, Belvidere Assembly plant manager. “To date we have achieved the Bronze level of WCM with a goal of reaching Silver by the end of this year.” He adds that the company spent weeks training operators, team leaders and supervisors on the principles of WCM and feels it successfully instilled in them the core values of the methodology so that they can consistently perform their job duties to the appropriate quality levels.

Gebka also confirms that the incubator continues to play a key role in facilitating efficient plant operation. “We bring together cross-functional teams to brainstorm and collaborate on all the processes that support manufacturing while also targeting employee engagement, building plant-wide communication, facilitating employee training and designing initiatives that improve team morale,” he states.

In addition, Gebka identifies as particularly noteworthy an orientation process for new employees developed within the incubator. “The process was redesigned from the ground up with direct input from both experienced and new operators,” he says. New employees now spend three and a half days immersed in the details about FCA in general and the Belvidere Assembly plant in particular. Then after that initial experience they spend a further day in the Process Centre, a new training facility which gives them hands-on experience in a controlled environment that simulates the conditions on the production line. Only then do they move to the shopfloor where they spend a further day job-shadowing an experienced operator.

Nevertheless, Gebka also stresses that the way that the plant now manages its IT operations is also crucial. “Big data is critical to the success of the Belvidere operation,” he states. It is, he continues, gathered and analysed by several systems - “our Performance Feedback System, the Factory Information System that monitors both process parameters and product status throughout the build stages; our WCM operating system; and the use of Andon.”

Gebka goes on to stress that this underlying IT capability is crucial to the success of specific automation initiatives that have been implemented within the plant. One such is a new ‘glass cell’ for installation of the front and rear windshield that turns what was once a manual process into a fully automated one. The robot in the cell is equipped with a vision system that ensures installation of the windshield in the optimal location for that particular body thereby reducing variation, improving overall vehicle quality and ensuring a tighter seal to reduce wind noise and water leaks. Gebka confirms that in consequence “the quality of the installation has been greatly improved.”

All of this, Gebka concludes, comes together to ensure that Belvidere’s quality processes and procedures are now definitively guided by the company’s WCM system in a consistent, integrated manner. Ultimately, though, the essential point is that “by applying WCM principles and industry leading automated solutions we are building a high quality 2019 Jeep Cherokee for our customers.”