Unease in the East 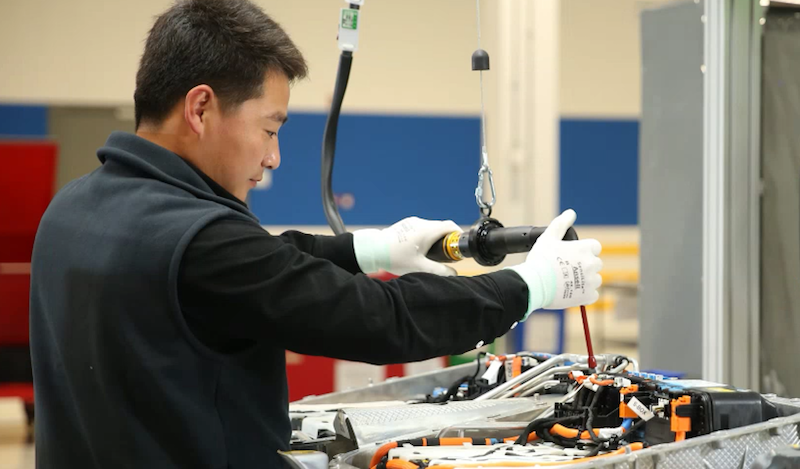 A fascinating year for China’s automotive industry has seen the world’s largest car market undergo a series of seismic shifts as it moves to a new level of maturity, bringing both downsides and upsides for those competing there.

The main downside has been a slowdown in sales, which is exposing excess capacity. The upside, for foreign makers anyway, is that the Chinese government, which exerts so much control over the industry, has shown to be sensitive to global pressures, slashing import duties and announcing that foreign owners will eventually be able own more than 50% of their joint-venture partnerships.

Generating most of the gloom right now have been three consecutive months of falling sales, with September recording a 12% drop to 2.39m vehicles, the largest decline for seven years. Production was down a similar 12% to 2.36m units, according to data from China’s auto industry association CAAM. In the broader nine-month time frame, sales figures were still up by a slim 1.5%, to 20.4m vehicles, but another month like September could put the year into negative figures.

This was unexpected. For example, France’s Groupe PSA predicted a 2% increase for 2018 over last year’s 23.8m, and Renault envisaged a lofty 5% rise in its half-yearly financial report. The drop could be attributed to global jitters rather than any fundamental structural issues in the market itself, according to analyst firm IHS.

“The trade conflict between the US and China has resulted in a slowing of the economy and dampening of customers’ confidence,” says senior analyst Nitin Budhiraja. He also blames rising petrol prices, which have got consumers worried about the ownership costs involved in a commodity that they might not need in a few years’ time. “It is highly likely that people will adopt car sharing without the ownership of a car in future,” he said.

Whatever the reason, the slump has hit global and Chinese brands alike. Ford’s nine-month sales fell a whopping 30% to 585,000, sparking a profit warning from Ford’s joint-venture partner Changan in the third quarter. Changan also has a partnership with Mazda. The Volkswagen brand, China’s largest, saw car and van sales fall 11% in September, contributing to a drop of 5.7% for VW Group brands. Meanwhile, sales at GM’s two joint ventures, SAIC-GM and SAIC-GM-Wuling, fell 6.1%.

Demand across Chinese brands was down 11% in August, according to CAAM, halting a run of growth that took them to a market share of just under 40%. The normally reliable growth machine of SUVs, of which the more nimble Chinese brands carved out half the market, faltered too with Chinese-brand SUV sales dropping 14% in August. In September, overall SUV sales had slumped 10%, even if nine-month sales were still up 3.4% at 7.2m.

Nothing is ever still in the world of Chinese automotive, and now everyone is jockeying for position to ride out whatever becomes the new normal. There are many factors at play here, most of which are orchestrated by the Chinese government. These include the mandated need to boost sales of electric and electrified vehicles, the desire from foreign carmakers not to be held back by any particular joint venture, and the increasingly pressing need for everyone to be in a safe position if the slump becomes prolonged.

With the goal of boosting competitiveness, the Chinese government is widely expected to merge the three big state-owned firms of FAW (First Auto Works), Dongfeng Motors and Changan Motors to create one of the largest automakers in the world. “The key reason for the merger is to obtain greater efficiency in product development by sharing platforms and R&D costs,” says Michael Dunne, head of analyst firm ZoZoGo.

The increased size will help the company cut its parts bill, enabling it sell cars at a more competitive price. The three constituent makers have long been criticised for neglecting their own brands and relying their joint-venture partners for revenue, which together include VW, Toyota, Mazda, Groupe PSA, Nissan, Honda, Kia and Ford. A merger could potentially be bad news for other brands. “A Chinese mega-merger would inevitably dilute the already slipping leverage of global players,” Dunne adds.

The joint-venture process has been tolerated rather than loved, with many automakers privately saying they’re reluctant to invest in more R&D while they’re not sure exactly how their partner will use their technology. Earlier this year, China said it was going to drop the requirement that foreign automakers can’t own more than half, with the ruling becoming law by 2022. Despite this, BMW quickly announced it was investing $4.16 billion in its joint venture company, BMW Brilliance Automotive, to raise its stake from 50% to 75%.

Who might follow? If FAW, Dongfeng and Changan do indeed merge, the resulting company will be far too large for any global automaker to take control of, even for someone with the purchasing power of VW. Of the others, SAIC is surely already too big for VW to swallow (and would likely be opposed by SAIC’s other partner GM), and the same goes for Daimler’s EV partner BYD. However, Daimler buying out its other partner, BAIC, is one possibility.

China’s reason for dropping the long-held requirement was partly to mollify the US as the two countries become more entrenched in a trade war, but also because the ruling had served its purpose, according to analyst firm Autovista. “The move can be seen as China having more confidence in its auto industry, with its companies making inroads into the European market,” it said in a report, citing Geely’s acquisitions of Volvo Cars and Lotus.

One result of the toughening market environment is increasing willingness on behalf of global players to take on Chinese competition, such as Geely, Great Wall, SAIC’s Roewe brand, and GAC.

Companies such as Skoda provide a good example. China is already the Czech brand’s largest market, and earlier this year, the company launched the Kamiq – a small SUV sold exclusively in China. Unlike next year’s European equivalent, the model has been developed with its Chinese partner SAIC to sit on an old PQ platform rather than the newer MQB. This saves on costs, allowing Skoda to price it in a way that appeals to residents in “tier three-five cities” – the smaller urban areas where Chinese brands have gained so much traction. Skoda is also due to launch the flagship, coupe-style Kodiaq GT – another exclusive for China. It will be the fourth model in the company’s SUV range, and will likely play a key role in the brand’s plan to double sales in China to 600,000 by 2020.

Ford, meanwhile, has reworked a compact SUV from Jiangling (JMC), one of its three joint-venture partners, and badged it ‘Territory’. Like Skoda’s Kamiq, the Territory will target less affluent buyers – a move that would have been unthinkable even three or four years ago. Ford is deliberately targeting customers in smaller cities, where it says 68% of midsize SUV buyers in China live.

Significant news on EV expansion is the norm now, and this autumn, two stories vied for attention. The first was that Tesla has bought land for its first car factory in China, located in Shanghai, signaling the Californian firm’s long-mooted move into the country. The second was that VW has started construction of its first EV-only plant in Anting, also Shanghai, with its partner SAIC.

The German OEM says its new plant will have a capacity of 300,000 of vehicles a year, all of which will be based on its new electrified MEB platform. Production is due to start in 2020, the first model being a VW-branded SUV. EVs from other Group brands will follow, including Audi, which will be the first SAIC cooperation with the premium brand (FAW is its normal partner, and it wasn’t happy with the SAIC link-up).

The 610,000 sq.m facility will have a press shop, battery-pack assembly facility and a proving road. It will boast over 1,400 robots with ‘Industry 4.0’ capability, which probably means the robots will be able to communicate via Wi-Fi or another other protocol to deliver factory efficiencies.

The race to electrify is in response to various targets outlined by the Chinese government, such as reducing the country’s dependence on oil. It wants capacity for 2m electric or plug-in hybrid vehicles by 2020, when it will force manufacturers to achieve so-called ‘new energy vehicle’ (NEV) sales amounting to 12% of their total. By 2025, the government wants there to be at least 7m NEV sales annually.

But purchase incentives will end completely by 2020, after which date the carrot will be replaced by a stick. Companies will have to comply with targets or buy credits from those who are above target. Some manufacturers have already entered into what could be termed as compliance partnerships – Ford with Zotye, VW with JAC, BMW with Great Wall – to build and sell EVs quickly to ensure they’re legal.

But the Chinese government is keeping a close watch on the growth. Draft rules released by the National Development and Reform Commission (NDRC) earlier this year said that any production planned for an area where automotive manufacturing was below 80% of capacity would be blocked. Existing automakers seeking to expand capacity, for all vehicles, must show they’ve got above-industry-average capacity utilisation and have built over 300,000 vehicles the year before. China currently has capacity of 41m vehicles a year versus actual production of 29m, according to figures from ZoZoGo.

Away from the disruption of the swiftly improving Chinese carmakers, the premium German brands are still selling well and increasing their market share. Audi, Mercedes and BMW are all remarkably similar in terms of numbers, with Mercedes just ahead in the first nine months of 2018 at 500,707 units sold, up 13% compared to the same period of 2017. Audi might rankle at giving up its regular top spot, but sales up were up 15% to 483,001 as it put last year’s dealer issues behind it. BMW was third with 459,629, up 5.3%.

Audi and BMW are adding more models to their local production. The latter will start building the X3 SUV this year in the north-eastern city of Shenyang, with an electric iX3 coming in 2020. The larger X5 is reportedly also coming. BMW has mostly focused its SUV production in the US, and the move has been interpreted as a reaction to Trump’s tariffs. In October, BMW said it was spending €3 billion ($3.42 billion) to update its Shenyang facilities, including doubling capacity at the Tiexi plant. The company also opened a battery-pact assembly facility in Shenyang last year.

Audi is also turning to SUVs, starting with a stretched version of its Q2 small SUV this year to join the Q5 and Q3. It currently builds four models in the VW-FAW Changchun plant and another one, the smaller A3, in the south in Foshan, giving the brand a capacity of 600,000. Audi says that can be stretched to 700,000 “over the next few years”.

IHS believes Audi will increase local production of five models to 13 by 2023. One of those will be an electric car based on VW’s MEB electric platform and built in a new, EV-only plant with joint venture partner SAIC in Anting, Shanghai.

Not doing so well in the premium sector is Jaguar Land Rover, which stopped production at its Solihull, UK, plant for two weeks in October to reduce mounting stocks after Chinese sales plummeted. It makes cars in China with its partner Chery, but imports more expensive models like the Range Rover. Bloomberg analyst Anjani Trivedi wrote in October that this was more a problem with JLR strategy than the market it competes in, stating:“China’s luxury car demand hasn’t turned down, whatever JLR might say. It simply got the market wrong.”

China’s decision to cut import tariffs from 25% to 15% will hugely benefit the premium brands, which account for around 80% of imported cars.