Ford and VW confirm their alliance; and raise questions … 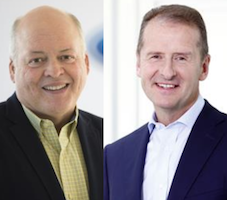 After months of rumours and speculation, Ford and Volkswagen have announced an alliance which would begin with the co-development and production of vans and pick-ups; it offers the prospect of wider forms of co-operation, in other segments, electric technology and support services. This is the latest move in the continuous process of realignment and restructuring amongst the world’s major car groups.

The coming together of these two leading players is a seemingly natural response to the challenges which even the biggest companies face in the rapidly changing automotive industry. Dealing with these challenges becomes even more challenging when, as at Volkswagen, the company is still reeling from the financial and legal shocks of the diesel crisis; and at Ford, which survived the 2008 financial crisis without resorting to US government help, new CEO Jim Hackett has finally decided to address the loss-making, or very occasionally profitable, European operations and re-focus the company as a whole onto profitable vehicle lines and accelerate the move into electric powertrains.

From the Detroit and Wolfsburg boardrooms, envious glances were probably cast in the direction of Paris and Tokyo, looking at the success of the Renault-Nissan Alliance. No doubt the arrest of Carlos Ghosn, the principal architect and driving force behind that alliance, will have come as something of a shock to Mr Hackett and VW’s embattled CEO, Herbert Diess. However, they continued with their own alliance plans, partly because, no doubt, they were too far advanced to go back, and partly because they had no obvious alternative.

Volkswagen had announced in late 2018 that it would switch three German factories to electric vehicle production; this was expensive enough, but as one of the plants concerned, Hannover, was also the principal production location for the Transporter van, and the European versions of the Amarok pick-up, this presented an immediate capacity planning issue. Meanwhile, Ford was facing mounting losses in Europe and had to address its falling capacity utilisation in traditional production locations, while also looking for ways to fully use its vast and expanding operations in Turkey.

The initial solution to both companies’ problems involves pooling development and production resources. And on the surface for the programmes concerned, the plan has a notable coherence and logic. Although details remain to be confirmed (and both companies promise more information in the next few weeks, or months more likely), it seems that Ford’s Turkish plant at Kocaeli will produce the commercial versions of the Transporter, adding around 120,000 units a year to Kocaeli’s output (some of this coming from Poland as well as Hanover). The Hannover plant will retain passenger versions of the Transporter, but these are made at lower rates, c30,000 or so per year; this should be relatively easy to retain within Hanover’s walls. Also, the interior suppliers for the passenger version are likely to be used for the VW I.D. electric minibus which will be made in Hanover so there will likely be some benefits in supply chain efficiency here too.

Meanwhile the VW plant in Poznan (Poland), where the Caddy small van is made, will also make the next Transit Connect, taking c100,000 units pa out of the Ford Valencia plant. This would mean Poznan could make close to 300,000 vans pa and will become a serious competitor to the Renault Maubeuge and PSA Vigo factories which make similar vans. Cost competition in the production of small vans is about to intensify.

The production locations of future pick-ups (based on the Ford Ranger, meaning the end of the current VW Amarok programme) have not been confirmed. The Ranger is currently made in South Africa and the US, but the US is not part of the initial alliance plans. From Ford’s side, the alliance also generates more questions about the Valencia (Spain) factory; this plant, once described as Ford’s largest outside Detroit, has an uncertain future. It is already expected to lose the Mondeo/S-Max/Galaxy programme which would shutter one of its two assembly halls. The loss of the Transit Connect would leave the factory with just the Ford Kuga SUV crossover; fortunately, this is one of Ford’s best sellers in Europe; as if it weren’t, it could well be adios to Ford production in Spain sooner rather than later.