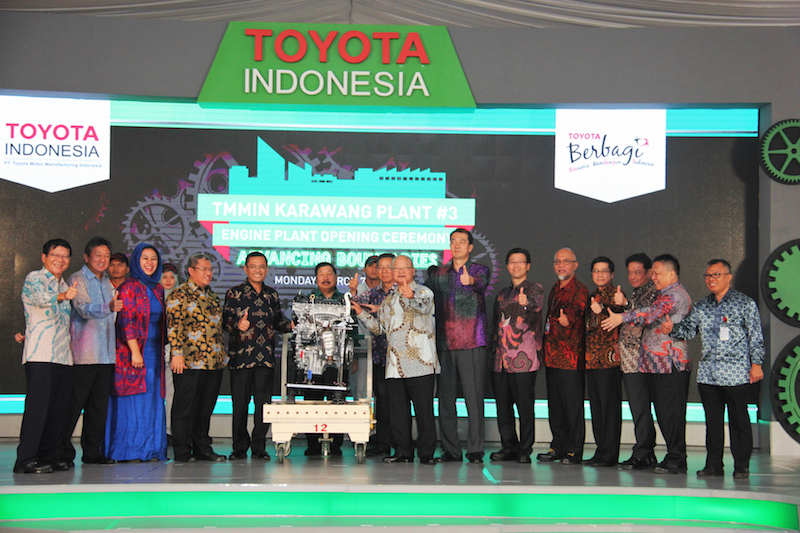 The overwhelming majority of vehicles made in the region are produced at wholly-owned or affiliate operations of the Japanese vehicle companies, or assembly operations of some European companies; mainly BMW, Mercedes and Volkswagen. Only in Malaysia are there national car companies, although one – Proton – is now 49.9% owned by the Chinese Geely group and the other – Perodua – is part-owned by Daihatsu and heavily reliant on Daihatsu/Toyota technology.

The following text covers the major recent developments in vehicle manufacturing in each country. 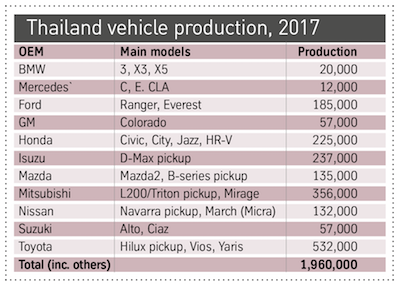 Thailand has been the principal production centre for the Japanese vehicle companies’ 1-tonne pickups, notably the Mitsubishi Triton/L200, Toyota Hilux, Isuzu D-Max and Mazda B-series. Some 1-tonne pickup production has moved away from Thailand, with Nissan now producing the Navara in Spain, Argentina, Mexico and South Africa as well. In addition, the range of vehicle types made in Thailand is widening; among the new models to be made there will be a local version of the Toyota C-HR compact crossover which has hitherto been made in Japan and Turkey.

Nissan and Honda are also diversifying into battery and hybrid vehicle production in Thailand. Nissan will open a factory in Bang Sao Thing district to build hybrid vehicles, using its ePower technology, including local battery production. Honda will do much the same at its plants in Ayutthaya and Prachin Buri. Nissan will invest around 1m Baht ($318m) and Honda about half this in their new plants.

Honda’s Prachin Buri factory is said to be one of its most technically advanced, using a moving cell arrangement that Honda calls the Assembly Revolution Cell (ARC) Line. This is a hybrid of a conventional line and assembly cells in which workers have a range of tasks to fulfil at their cell, rather than just carrying out a single standard task specific to each stage on a traditional line; Honda claims this arrangement is around 10% more efficient (ie. quicker) than a conventional line. Central to the system is delivering the correct parts directly to each assembly location, saving workers time otherwise spent looking for the correct part in parts bins next to the line; in this system, workers are also more versatile and able to carry out a range of tasks across the factory, enhancing productivity and flexibility. The plant makes up to 120,000 upa (a little over one quarter of Honda’s total capacity of 420,000 upa in the country). The main model made in this new facility is the Civic sedan.

Another Japanese OEM, Mazda, has invested heavily in engine machining technology, expanding powertrain production in Thailand. Around 22 billion Baht is to be put into new machining lines for head and blocks for the SkyActiv diesel and petrol engines, which are used locally and in Mazda assembly operations elsewhere in the region. This has led to a trebling of engine production from 30,000 to 100,000 a year. Around 30% of these engines are exported, as are around 80% of the transmissions made in the country.

Meanwhile, BMW will produce PHEV batteries in the country from 2019 for use in the small number of BMWs made in the country. The carmaker’s Thai production will rise soon, with the X5 due to be made there from US kits for onward shipment as CBU models to China. This will enable BMW to avoid the tariffs imposed in China on US-made vehicles. Up to 20,000 X5s are expected to be made in Thailand under this arrangement. Mercedes is following a similar strategy to BMW, investing around €100m ($113m) to make hybrid batteries in the country, for use in C, E, S and GLE models assembled in the country.

While the Japanese have been the major producers in Thailand for many years and European premium brands have had low volume assembly operations for some time, the Chinese are becoming active in the country. For example, in late 2017, SAIC opened its second Thai plant and can now make over 100,000 MG-branded models in the country, primarily for the various right-hand-drive markets in the region, as well as a small number for export back to the UK.

This is one of the largest regional markets and production locations, with a strong and rising export ratio. For example, Mitsubishi exports the Xpander compact MPV from its plant at Bekasi to the Philippines, with a target export volume of 30,000 units for 2018. Exports will also be made to Thailand (6,000 in 2018) and Vietnam (1,000 target in 2018). The model is also due to be exported to the Middle East and across Africa in 2019, with between 30-50,000 to be allocated for exports beyond ASEAN markets. Total Xpander production should reach 120,000 in the current fiscal year, rising to 150,000 next year. Current maximum capacity is 160,000 upa, following total recent investment of 4 billion yen ($34m). Engines come from a Nissan plant in Indonesia and contribute to a local content ratio of 80%.

Toyota is also expanding in Indonesia, currently mainly through its Daihatsu subsidiary’s affiliate in Indonesia, Astra. Production capacity is being expanded to make the Rush SUV, which is a rebadged Daihatsu Terios. Exports of the Rush to the Philippines have begun and further markets will receive this model in the coming years.

Toyota has five plants in Indonesia, all near Jakarta; two car plants in Karawang, a petrol engine plant also in Karawang and two factories in Sunter, one making petrol engines and one making stampings and castings. Other models made in Indonesia include the Toyota Sigra which is claimed to have a remarkable 94% local content level; and the twin models Daihatsu Ayla and Toyota Agya (similar in size to the European Aygo), which are also made by Astra Daihatsu. As well as the Japanese expanding production in Indonesia, the Chinese have invested there, with Wuling opening a $700m plant in 2017 and DFSK Motors now building a new plant with a $150m investment.

Honda has a major operation in the country, which makes seven models at two factories in Karawang, West Java with a total annual capacity of 200,000 vehicles. The production line-up consists of the Mobilio, BR-V, HR-V, Jazz (Fit), Brio RS, Brio Satya and CR-V. The plant is also a key components supply point for the Honda network overall, with components going to Honda operations in other ASEAN locations, as well India, Pakistan, Latin America and Japan. Honda also achieves a local content ratio of 87% for its Indonesian-made models.

The expanding vehicle manufacturing sector is also giving a boost to the country’s component sector, especially the local operations of major Japanese companies. One good example is the steel company Krakatau Nippon Steel Sumikin (a Japanese-Indonesian JV); this has opened a $300m mill in Cilegon, north-west Java, in August 2018; initial annual capacity is 120,000 tonnes of anti-corrosion, high-strength steel which is expected to reach 480,000 tonnes per annum when fully operational.

Here the main producers are Perodua (which is heavily reliant on Daihatsu and Toyota technology) and Proton, now 49.9% owned by Geely. Geely’s Swedish subsidiary Volvo has had a small-scale assembly facility in the country for some years, and this is now expanding. Notably this will include some export work with Malaysian-assembled S90s due to be exported to Taiwan. Further exports are planned for Indonesia, the Philippines, Taiwan, Vietnam and Myanmar. Production is low volume with around 4,000 to be made in 2018, rising to 6,000 in 2019. These are all CKD models, using kits from Europe, with the current range assembled consisting of V40, S60/V60, XC60, XC90 and the S90.

The Proton operation is at something of a crossroads, facing economic challenges caused by its high level of expensive local sourcing; Proton has told suppliers that local prices are 30% too high compared to prices available internationally. In addition to facing higher than ideal procurement cost, production volumes have fallen, with local production having fallen to under 70,000 in 2017, from 200,000 a few years back. This fall has contributed to the imminent closure of the Shah Alam plant with production moving to Tanjung Malim in 2019, following an investment there of RM1.2 billion.

Under Geely, Proton is now charged with raising annual production back to 200,000 by 2023 and to 400,000 with ten years, half of which will be for exports, although actual export markets have not yet been defined.

Proton will also make Geely models going forward, the first of which will be the Boyue SUV that will be imported initially, before switching to being assembled in Tanjung Malim from 2019. Proton will be also be the production hub for all right-hand-drive Geely Boyues, as well as a Proton SUV, X70. This will begin life as a CBU model made by Geely in China, with production in Malaysia beginning in mid-2019. Initially it will have local content of 30%. In addition, Proton-branded production facilities are expected to be opened in China as part of Geely’s broader expansion plans. 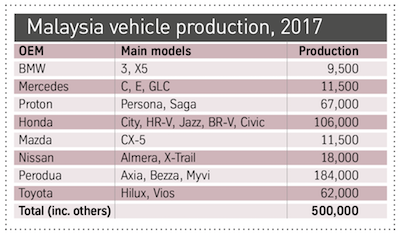 Proton was initially developed as a national car company, but despite the government’s wish for a national car company champion, Proton has not developed sufficiently on its own and without Geely would have a questionable future. A second national company, Perodua, has also emerged, but this is 32% owned by overseas investors – the Malaysian market, and domestic investors alone, are not enough to allow a fully-fledged car company to develop as an independent globally competitive model. Perodua focuses on small cars, making around 200,000 upa; with this product focus, its association with Daihatsu is sensible and logical.

In addition, Toyota opened a plant in Malaysia in May 2016, with an initial capacity of 50,000 upa. This is now being doubled and will make electric vehicles from late 2019 following an investment of $489m, with the original facility allocated to ICE-powered commercial vehicles. In the interim period, the Yaris will be assembled from CKD kits.

BMW also has a low-volume assembly operation in the country, making the Mini 5-door hatch and Mini Countryman, 330e, 530e, X5 xDrive40e and 740Le, with the smaller models using locally-assembled engines; this is small scale, with capacity historically limited to around 10,000 upa but expected to at least double in the next few years. Some of the Minis are exported regionally, including to Thailand. Other German companies, notably Mercedes and Volkswagen, also assemble in Malaysia: Mercedes makes 12 different models, while Volkswagen makes the Passat and Vento sedans, all of these being CKD units

Here the main producers are Toyota, Mitsubishi and Nissan, and 2018 has seen Toyota start production of the Vios compact sedan, with a significant increase in local sourcing on this model. This follows government policy to expand components manufacturing in the country. The first Vios was imported into the Philippines as a CBU model in 2003, with production starting in 2007 at Santa Rosa, Laguna. The plant also makes the Innova, a compact MPV. Production is split around 33,000 Vios and 20,000+ Innovas.

Other manufacturers in the country include Mitsubishi with the Mirage and L300 and Nissan with the Almera, Navara and Urvan.

The country is poised to become one of the newest and fastest growing production locations in the region. Some international companies are there, eg, Ford, which makes the Fiesta, EcoSport and Transit in low volumes on a CKD basis, but of more interest and long term significance is Vinfast. This new, domestically-owned company (which has taken over GM’s former plant in Hanoi) launched two new models at the 2018 Paris motor show – a four-door sedan and a five-door SUV. Launched with the backing of David Beckham, the new models were developed by a team of experienced European executives and rely heavily on technology licensed from BMW and technological contributions from ABB, Magna Steyr and Siemens. Production of the Vinfast models will begin in an all-new plant in Hai Phong in Q3/2019 at a modest 50,000 pa initially; the size and price of the new models (which are well above the affordability levels of most Vietnamese consumers), Vinfast will mainly target export markets initially.