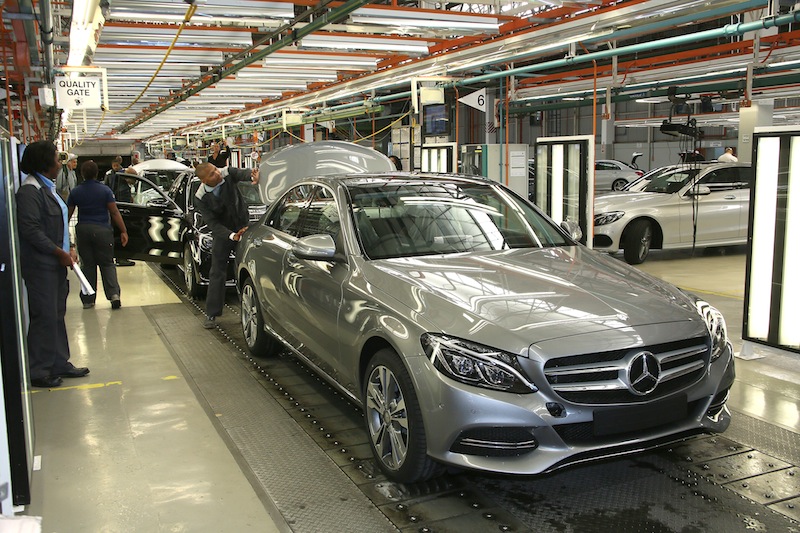 “Which countries produce the vehicles you drive?” is a question that prompts answers such as Germany, Japan, Italy and France – plus the UK, the US and South Korea. Most people would be surprised to find that over the last few decades, and especially since 1990, automotive manufacturing has moved into the number-one spot for contributions to the GDP of South Africa, accounting for a large chunk of the country’s manufactured exports. According to figures released recently by OICA, the international association of vehicle manufacturers, South Africa ranks in the top 25 automotive-producing countries worldwide.

In 2013, the country turned out 545,913 vehicles, consisting of 265,257 cars and 280,656 commercial vehicles (CVs). The automotive industry is a major employer, with close on 30,000 people working in new-vehicle production for major OEMs as well as specialist CV and bus manufacturers. From the establishment of the first factory in 1924, South African automotive production has grown significantly and vehicles are now exported to 53 countries, including Japan, the US, Australia, Germany and the UK.

However, the industry is not limited to the production of complete vehicles; it is a major player in the export of components such as catalytic converters, tyres, engines, exhaust pipes, silencers and spare parts. Most of these exports go to Europe, with the EU absorbing 70% of the total. Out of the 117 countries worldwide which import these products, Germany is the largest recipient.

Although South Africa is a vast country comprising 11 provinces, automotive manufacturing is concentrated in just two of them: the Eastern Cape and Gauteng. However, a third province, KwaZulu Natal, also hosts production plants for Toyota and Bell Equipment. OEMs with factories in South Africa can take advantage of low production costs plus access to new markets as a result of trade agreements with the EU and the Southern African Development Community free trade area.

At present, South Africa is responsible for over 80% of all vehicles made in the continent, although this proportion could drop significantly as global OEMs see the benefits of favourable conditions in other emerging African economies such as Nigeria.  However, the biggest names in automotive manufacturing are entrenched in South Africa and likely to maintain their presence in the country for the foreseeable future.

In 1996, BMW invested R1 billion ($90m) in upgrading Rosslyn to bring the plant into line with international standards and earn the title ‘BMW World Plant, Rosslyn’. A decade later, prior to the production launch of the most recent 3-Series, the factory saw a further investment of R2.2 billion. This allowed BMW to increase the workforce by 600 and boost capacity to over 90,000 units per year.

While this expansion took place during the global economic crisis, BMW board member Frank-Peter Arndt stated publicly that, “The BMW 3-Series is the most important volume-produced model by the BMW Group as well as the biggest-selling model in the entire premium segment.” He added: “Even though the global economic outlook remains uncertain, we remain true to our commitment to this production location.”

However,  BMW South Africa is currently facing a big challenge as economic and political instability in the country has seriously affected production; the company lost 15.8% of its annual vehicle production for 2013, equating to 13,000 vehicles that were due for export.

Ford: Splashing the cash
Ford Motor Company of Southern Africa (FMCSA) recently spent more than R3.4 billion to transform its two production plants into world-class facilities for manufacture of the new Ford Ranger and Duratorq TDCi engines. These products are currently being made for both the domestic market and, more significantly, for export to 148 countries. This large cash injection provided the technology which allows the Silverton Assembly Plant, Pretoria, to produce over 110,000 units annually. Silverton assembles light commercial vehicles (LCVs) that are supplemented with passenger vehicle imports from a number of different countries. 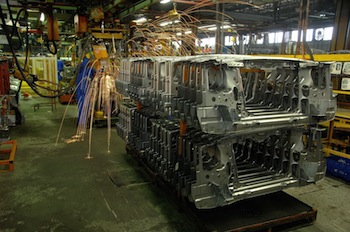 Approximately 75,000 of these units are used for local engine assembly to power the new Ranger built at Silverton. The remaining 175,000 component sets are destined for export to Ford engine assembly plants in Thailand and Argentina.

Earlier this year, Struandale also commenced production of the 3.2-litre, five-cylinder diesel engine for the North American market – the first time FMCSA has exported to the US. The additional annual capacity of 31,000 engines is destined for the Ford Transit van, which is assembled in Kansas City.

GM: An ancient history
Also in the Eastern Cape, General Motors was one of the first producers of vehicles in South Africa. Chevrolets, which have become part of national folklore, have been sold in the country since 1913, while the first manufacturing facilities were built in 1926. From the beginning, the South African operation was producing vehicles for brands including Chevrolet, Oakland, GMC trucks, Buick, Pontiac, Oldsmobile and Vauxhall. During apartheid, the company halted production and disinvested in South Africa, although it maintained a presence through the Delta Motor Corporation. GM quickly returned after apartheid ended, purchasing the remaining 51% stake in Delta.

Denise van Huyssteen, a spokesperson for GM Africa, recently said that the OEM’s return to the country had ushered in a major expansion phase, with investments of more than R4 billion in new vehicle assembly programmes and construction of the high-tech Vehicle Conversion and Distribution Centre in Aloes, followed by the Parts Distribution Centre in the Coega Industrial Development Zone.

VWSA: From the Beetle to the Golf
Port Elizabeth, the largest vehicle production hub in South Africa, is also home to the big, modern Volkswagen plant at Uitenhage. Volkswagen South Africa has come a long way since its foundation in 1946. The company’s African adventure began when the Indiana-based Studebaker Export Corporation signed a franchise agreement with South African Industrial and Commercial Holdings, marking the birth of South African Motor Assemblers and Distributors Ltd (SAMAD), later VWSA.

From day one, the focus of the plant was on production of the iconic Beetle and Kombi models which continued until the 1970s, when Beetle manufacture ceased and the company started making the perennially popular Golf 1 – today’s Citi Golf. With a workforce of 230 individuals, the initial output was 12 vehicles per day. Until the 1990s, VWSA manufactured vehicles solely for the South African market, but in the 20 years since it began exports of Jetta 2s to China, production has increased massively. Uitenhage currently makes 112,514 cars per annum, exporting 54,225 Polos and CrossPolos.

Over the last four years, the plant has seen some major developments, with the introduction of several process changes; VWSA implemented a new production system at the same time as new assembly technologies made their debut and new buildings were constructed. The company has invested billions in modernising a plant which produced the last Citi Golf in 2011, after 31 years of manufacture. 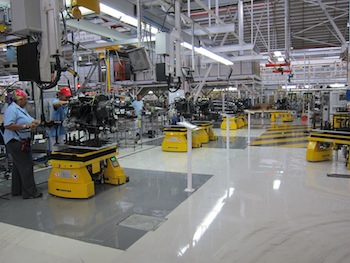 The most recent addition to the facility is a R500m, 10,000 sq.m press shop which houses six presses, with a total capacity of 81,000 kN. Uitenhage has become the first plant in the global VW network to install a press line that combines wave motion technology with Cobra robotics technology. This latest expenditure brings the total investment by VW in its South African manufacturing operations between 2006 and 2014 to R5.4 billion.

David Powels, managing director of VWSA, says: “In the past, Volkswagen South Africa imported over 60% of its parts. With the production of the new right-hand drive Polo for global export, we are now able to boost the share of parts produced in South Africa quite significantly. Based on 120,000 cars per year, we are raising local content to 70%.”

As of 2014, East London started producing the new C-Class as one of four locations in a global production network comprising the German lead plant in Bremen, the US facility in Tuscaloosa, Alabama, and the Chinese production site, Beijing Benz Automotive Co. (BBAC). Arno van der Merwe, CEO and vice-president Manufacturing, Mercedes-Benz South Africa, commented: “The new C-Class marks another milestone for Mercedes-Benz in South Africa and for the East London plant. We have created 550 new jobs at the plant and have also made significant investments for the qualification of our staff. This goes especially with regard to the host of innovative manufacturing technologies which have been introduced at the plant for the first time with the new C-Class.”

He concluded: “We are thus optimally prepared to write the next chapter of our 'Made by Mercedes-Benz in South Africa' success story". 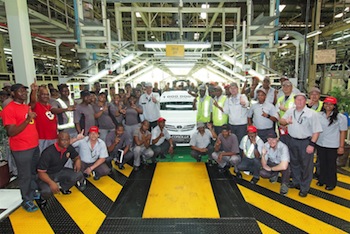 Nissan’s presence in South Africa began in the 1970s, when the Japanese OEM began making use of local assembly plants for CKD vehicles. As a result of high demand for its vehicles, Nissan then built a plant in Rosslyn; it currently enjoys an 8% share of the South African market. One year after the creation of the Renault-Nissan Alliance in 1999, the company increased its interests in South Africa by purchasing a 37% stake in Automakers; 12 months later the name of the entity was changed to Nissan South Africa.

Nissan South Africa is now one of the top three automotive companies in South Africa, and in fiscal year 2012 the company sold 50,542 vehicles. Currently, Rosslyn produces the Nissan one-ton pick-up plus the current NP200, NP300 Hardbody, the Nissan Livina range and the Renault Sandero under the Renault-Nissan Alliance. Nissan South Africa is the operational hub for Regional Business Unit South, which serves the OEM’s key South African market plus 42 other countries in Sub Saharan Africa, including Angola, Ghana, Kenya and Nigeria.

Meanwhile, Toyota is not only one of South Africa's largest manufacturers and exporters of built-up vehicles, the company is also a significant employer, with a workforce in excess of 8,500 employees. At its extensive manufacturing facility in Prospecton, south of Durban, Toyota manufactures the Hilux and Fortuner for both South Africa and export markets. It also assembles all Hino trucks and Ses’fikile taxis, built from imported kits.

The future’s not so bright
Despite having the necessary infrastructure in place and large export orders signed and sealed, the future is not looking bright for South African automotive manufacturing. According to Rick Hanna, head of the automotive division at global consultancy PwC, the current pitfalls facing the industry include an unstable labour environment, low volumes and a volatile currency. Hanna’s conclusion seems damning: “If I was an overseas investor, I would probably put my new factory in China”.

The local market is forecast to show minimal growth over the next couple of years, in response to rising interest rates, higher fuel prices and weakening consumer confidence. Government and industry leaders might well consider whether South Africa’s Automotive Production and Development Programme (APDP) needs some revision to attract more investment.