By assessing hundreds of assembly tasks through virtual simulation, ergonomists at Ford have helped to drastically reduce worker-injury rates 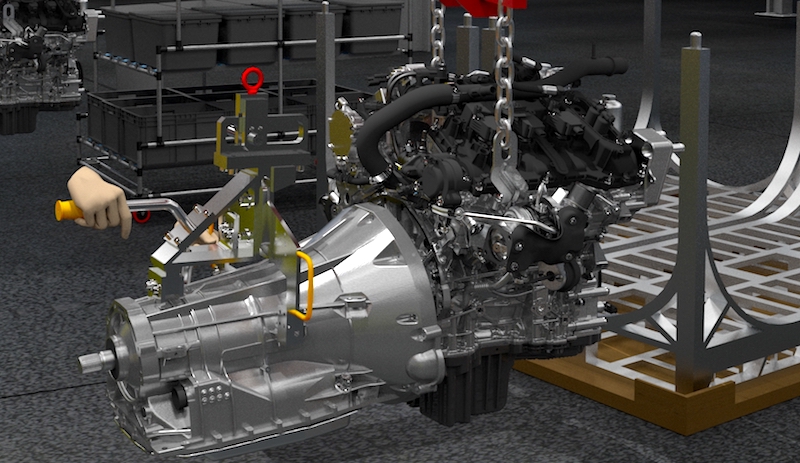 Industrial athletes, that’s how Ford affectionately regards its assembly line employees. The phrase is an acknowledgement of the physicality required to work on an automotive production line. However, the OEM also recognises the risks of fatigue, strain and injury that inevitably come with such an active occupation.

For the past few years, ergonomics technology, lift-assist devices, workstation redesign and data-driven process changes have enabled Ford to push down injury rates; among the 56,000 “industrial athletes” at its US plants the drop was 70% between 2003 and 2015. Furthermore, the company reports a 90% reduction in broader ergonomic complications such as overextended movements, constricted hand clearance and tasks involving hard-to-install parts.

“By and large, other companies take a retroactive approach to ergonomics,” says Ford ergonomics engineer Marty Smets. The norm was to address ergonomic hazards when they presented themselves on a real job, affecting an actual operator. Typically, a plant ergonomist was only called in to assess a workstation following a complaint about a given situation.

“In those days of reactive ergonomics, it didn’t take long to realise that many of the issues that were being caught during the early physical builds tended to fall into one of three bins; either the force to install the part was too high, the reach to the part was too far, or the hand clearance to access the part was too tight,” explains Smets.

At Ford, the earliest point at which ergonomists could make an impact was during the first physical builds: the timeframe where the digital/planning phase transferred to the prototype vehicles. However, as Smets states, the ideal situation is to avoid the injury all together through more effective planning during the virtual timeframe: “This is called proactive ergonomics and this process leverages 3D vehicle data and digital human models to bake safety right into the design of the vehicle.”

While this approach means more work up front for Smets and his colleagues, it allows the ergonomists to assess and act before the process reaches a stage where changes to parts and tools would be costly.

Virtual manufacturingDigital human modelling is a rapidly developing technology. A similar set up is used in the field of sports science to monitor and examine the actions of professional athletes to help them improve their performance and, crucially, steer clear of injury. So, if it works for Olympic athletes, it can help Ford’s industrial athletes.

Ford’s focus is on two key areas – design feasibility and the safety of employees at the assembly line. Two to three years before a new model launch, Ford’s ergonomists create a virtual simulation of the build process using both human and virtual test subjects to gauge the physical labour demanded by the process. In an effort to reduce and avoid adverse effects on the worker, the data collected is used to guide engineering solutions prior to implementing tasks on the production floor.

“Not only do we avoid an injury, but we also ensure higher quality as a result of optimising the work tasks to our operators’ capabilities,” Smets says.

Full-body motion capture delivers data on the movements that an individual assembly line worker goes through when completing a task. Actions are recorded from 52 motion-capture markers on the arms, back, legs and torso. Ergonomists collect more than 5,000 data points to evaluate muscle strength and weakness, joint strain and body imbalance. 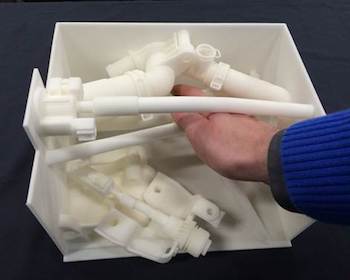 Immersive virtual reality employs a 23-camera motion capture system and head-mounted display to place an employee within a virtual workstation. With it, Ford can develop the optimum working environment.

The emergence of 3D printing means that ergonomists can recreate situations for which virtual simulations are less effective. Tight hand clearance is one example, but a 3D-printed model allows for various hand sizes to be tested against a proposed component arrangement.

Expertise in how people workErgonomists are typically individuals with postgraduate degrees in biomechanics or ergonomics, with an expertise in understanding how people physically carry out the work. Ford’s team is principally an in-house one but some agency ergonomists assist with the final stages of a programme. This frees up Ford’s own team to concentrate on the next project. In most cases, one ergonomist is assigned to each vehicle programme. The team is global, so besides North America, Ford has ergonomists in its European, South American and Asia-Pacific regions as well.

“They will see a programme through from the initial kick-off to actual build,” Smets says. “Almost every Ford vehicle-manufacturing facility in the world will benefit from the work that is done upfront to design safe jobs. We have over 56,000 UAW (United Auto Workers) employees in our North America manufacturing facilities alone.”

Positive influenceBy engaging with the wider engineering community, Ford’s ergonomists can influence large-scale production line changes, particularly during major vehicle launches. Smets sees this as the opportunity to optimise the line ergonomically from the outset. 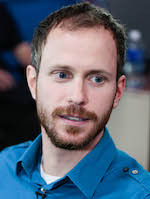 "Not only do we avoid injury, but we also ensure higher quality as a result of optimising the work tasks to our operators' capabilities" - Marty Smets, Ford

“Once a major product has been launched and all the tooling ‘monuments’ are in place, we are a little more constrained in terms of the magnitude of change we can elicit. That’s why it is so critical to use the best available technologies to set things up right the first time.”

Ergonomists look at every new Ford part or process to ensure it can be safely assembled. In addition to the new or changed parts, work takes place at specific plants to ensure any jobs that were potentially problematic for them are also addressed. This ensures Ford “closes the loop” to feedback lessons learnt into the assembly design of future product.

“The major advantage of performing as much work as you can during the virtual timeframe is that it provides the opportunity to design an assembly environment that fits the human, rather than the other way around,” says Smets.

Smets explains: “A few years back we did a project with some researchers at Penn State [University] that ultimately led to the development of a Ford-specific set of digital human models. There are publicly-available datasets that characterise [human] dimensions, but they are made up of different kinds of people than those that tend to work in our assembly plants.” 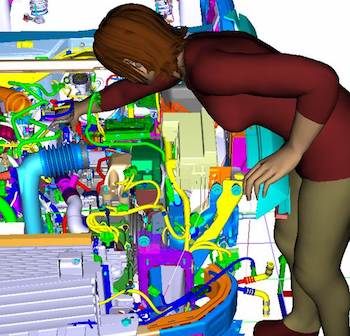 Ford aims to design an assembly environment that fits the human, rather than the other way around

Using readily attainable metrics of the UAW population – height, weight, ethnicity, BMI, etc. – Ford was able to develop “regression equations” that could predict all other parameters of their body dimensions.

By ensuring this action is acceptable to the shorter operators, Smets and his colleagues can be confident that all operators will perform the task without any reach issues.

A force for goodIn terms of operator strength, Ford can accurately predict how much force or effort a person could apply to a part in a particular posture. Since the average strength capability of every joint in the human body is known, ergonomists can judge whether a task would be too difficult to carry out.Moreover, the precise amount of force an operator can apply to avoid injury can be predicted.

“This information is given to our product designers to ensure the parts they design comply with the targets we set. For example, the same hose might be used on large and small cars, but because the reach might be further on a larger vehicle, we may provide a different insertion effort target to our design team due to the longer reach and reduced capability in the more extreme posture.”

Spreading the wordWith such a vast global workforce, it’s no simple task to convey ergonomics advice to the assembly workers and receive the all-important feedback from the sharp end.

Ergonomists regularly meet with the reps to ensure skill sets are in order and all parties are familiar with the strategies in place to decrease risk: “We also engage some of the senior operators in the design process by bringing them into the lab, immersing them in the plants of tomorrow, and leveraging their knowledge of the assembly process to guide design,” Smets says.

From influencing large-scale production process design to finding the small improvements within an existing line, ergonomists continue to help Ford’s industrial athletes play to their strengths.