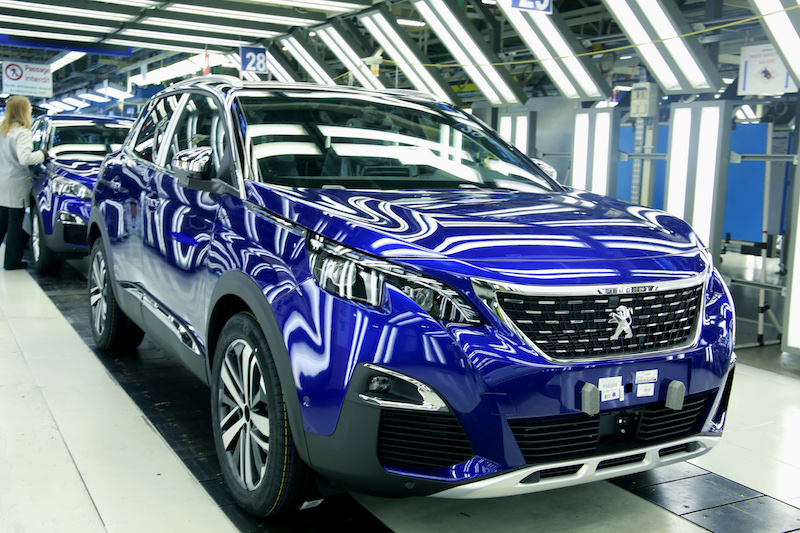 When Carlos Tavares arrived at PSA from Renault in 2014, he set about turning around the loss-making company. His plan, embodied under the strapline ‘Back in the Race’, aimed to restore PSA to profitability, cut costs and transform its product portfolio. Overhauling the company’s offering, notably adding SUVs and crossovers of varying sizes, has been key.

The company is now rapidly building a presence in segments Peugeot and Citroën had been very slow to enter. Prior to Tavares’ arrival, PSA’s dire financial status had been boosted in 2013 with capital injections from both the French government and the Chinese company Dongfeng, each of whom took a 14% share. When Dongfeng became a shareholder, GM felt obliged to sell the 7% stake in PSA it had taken through a private share placement in 2012.

Despite the share sale, long-planned joint vehicle programmes in Europe were retained and, indeed, they have recently been launched. The first of these was the B-segment Citroën C3 Aircross/Opel Crossland X made at Opel Zaragosa, followed by the larger Peugeot 3008/Opel Grandland X made at PSA Sochaux (although production of the Grandland X will switch to Opel Eisenach from mid-2019 following agreement between PSA and the German unions).

Geographically balancedWith the company returning to profitability, Groupe PSA launched a new strategy, ‘Push to Pass’. The following core aims are to be fulfilled by 2021: maintainence of automotive operating margin at over 6%, growth of revenue by 25%; and, having achieved a minimum of €700 (US$817) saving per vehicle by 2018 at Peugeot, Citroën and DS, the company now wants to achieve an even higher ratio at Opel/Vauxhall - €1,100 saving per vehicle.

Progress with the new strategy was already clear in PSA’s full-year 2017 results, which showed a rise from 6% to 7.3% in recurring operating profits, with revenue climbing to over €65 billion. Opel/Vauxhall was still loss-making in 2018, so the group’s profit improvement is especially noteworthy. In Q1/2018, the company’s revenue for the quarter was up just over 42% at €18.2 billion, versus just under €12.8 billion in Q1/2017; Opel/Vauxhall alone added just over €4.8 billion of revenue.

"The group's two core platforms will also incorporate electric powertrains, with PSA’s future developments in this area channelled through a joint venture with Nidec."

Groupe PSA’s results for early 2018 continue to show a company in a rude state of health. It also has many challenges to address with the recently acquired Opel/Vauxhall operations. Its Q1/2018 results showed European sales volumes ups 8.7% in the PCD (Peugeot Citroën DS) division, with Peugeot up 11.9%, Citroën up 4.4% and DS up 5.6%; and with a new range of SUVs/crossovers being launched, Peugeot and Citroën are reportedly the fastest growing brands in the top 10, with Peugeot claiming to be the number one SUV brand in Europe.

Comparing Q1/2018 with Q1/2017, PCD reported a 6.6% rise in volumes worldwide, but the whole company, including Opel/Vauxhall, could actually report a 44% volume rise as a result of the acquisitions. Moreover, Q1/2018 worldwide volumes were just over 1m, suggesting the tantalising prospect of reaching 4m units worldwide for the full year.

This impressive picture is increasingly global, with PCD claiming a rising European market share of 25.7%, and sales outside Europe growing by 16% year-on-year. Looking ahead, PSA is expecting a broadly stable picture in Europe during the rest of 2018 and modest rises elsewhere, e.g. China (+2%), Latin America (+4%) and Russia (+10%).

A twin strategyWhat is more, this growth is not just due to cars. For example, the company has a growing manufacturing footprint for vans, with production of the Expert and Jumpy models recently starting in Uruguay and Russia, while a joint venture in Uzbekistan is due to start production in 2019. Elsewhere, PSA is opening all-new factories in Malaysia and Namibia in the second half of 2018, and in Algeria during 2019. The Malaysian factory will become PSA’s future manufacturing hub for the ASEAN region; firstly producing the Peugeot 3008, which will be followed by the Citroën C5 Aircross in 2019.

In Africa, PSA wants to position itself to take advantage of the continent’s imminent and overdue industrialisation. It is following Renault into Morocco, with a vehicle plant to start production within a couple of years (engine production will begin there in 2018), making the replacements for the Peugeot 301 and Citroën C-Elysee which were made in Vigo, Spain in recent years. In addition, production in North Africa will include a pick-up truck for the local market based on a Chinese design.

PSA intends to produce almost its entire range – including future Opel/Vauxhall models – off just two core platforms, namely CMP (Compact Modular Platform) for models of the 208/C3/Corsa size and EMP2 (Efficient Modular Platform version 2) for almost everything else above CMP models. The new Opel/Vauxhall Corsa will be made on CMP, while large models, i.e. Astra and Insignia, will transition to EMP2 over the next couple of years.

The two core platforms will also incorporate electric powertrains, with PSA’s future developments in this area channelled through a joint venture with Nidec. All core PSA models will be offered in electrified format, either plug-in hybrid or full battery electric, by 2025 if not before. By the middle of the next decade, PSA expects electrified vehicles to represent 15% of the market in Europe. This projection, made when the 2017 results were released, could be surpassed. The latest statistics from the European Automobile Manufacturers’ Association (ACEA) show that demand for battery electric vehicles (BEVs) rose by 34.3% during the first quarter of 2018, and plug-in hybrid electric vehicle (PHEV) sales grew by 60.2%.

China and IranAfter a period of strong growth China, PSA went into reverse in 2015 and 2016; but 2017 saw the beginnings of a rebound, with H2/2017 showing a 55% improvement in sales volumes over H1. Interestingly, full details on China are not included in the current financials, with PSA instead grouping Chinese sales with those for Asia as a whole. This may suggest that, while some improvements in the company’s performance in China have been made, the figures are still not as good as PSA would like. Nonetheless, 2018 should see further improvement in China with the local manufacturing launch of two more SUVs - the DS7 Crossback and the long wheelbase C4 Aircross.

To oversee the Chinese turnaround, PSA moved its head of Brazil, Carlos Gomes, to China. This has already had some impact: PSA sales in China rose by 1.8% in Q1/2018, primarily due to improvements at Citroën which saw a 41% rise thanks to the launch of the new C5 Aircross. Elsewhere, by contrast, work remains to be done, especially launching new models that are curently making a mark in Europe. In Q1/2018 Peugeot volumes were down 14%, and DS sales – ahead of the Chinese launch of the DS7 (the model seen as the key to moving the brand upmarket in both China and Europe) – were down 60%.

As for Iran, PSA was one of the first western car companies (alongside Renault) to re-invest in the country when global investment sanctions were lifted in 2015. The company signed deals worth around €700m for production joint ventures in the hope of re-establishing itself as the leading manufacturer in the country. Quite what President Trump’s decision to pull the US out of the 2015 deal means for companies like PSA is currently unclear. A PSA spokesman recently expressed the hope that the EU would protect the investments that PSA and others had already made, or planned to make, in the country.

The EU appears have to have taken an opposing view to that of US, proposing a Blocking Statute, which would forbid EU companies from complying with the extraterritorial effects on US sanctions and allowing them to sue the person/entity causing any loss for damages. On a broad level, the EU appears to want to keep Iran on its side and in return help the Iranian government to be able to receive oil revenues. For now, however, the situation remains fluid.

The impressive sales figures and potential for reaching 4m units in 2018 have been aided by a series of new model launches, of which the following are key:• Peugeot 508 – which will likely form the basis of an imminent replacement for the current Opel/Vauxhall Insignia• Citroën C5 Aircross – based on the Peugeot 5008 it will also likely form the basis of a new SUV for Opel/Vauxhall to be made at Russelsheim, from 2019• DS7 Crossback – the new flagship in Europe and China for the DS brand• And the new Citroën Berlingo/Peugeot Rifter, which will also be made as the Opel Combo, replacing the current Fiat-sourced model.