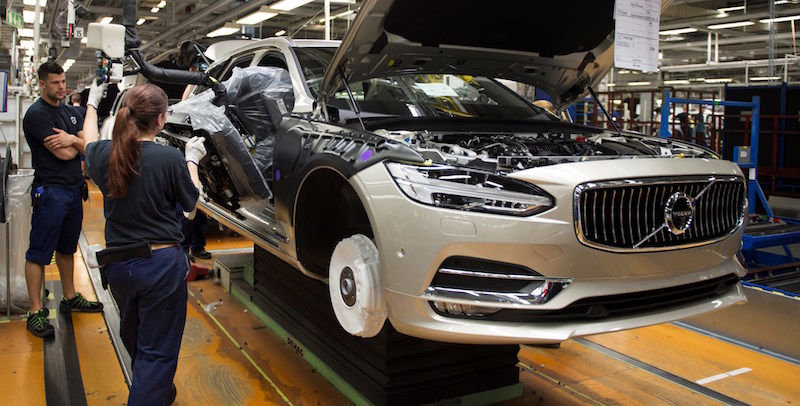 H1/2016 figures suggest that the full year results for 2016 will see Volvo produce an even better set of numbers than in 2015. Sales worldwide between January and June rose over 10% to nearly 257,000, with growth taking place in Europe (up 10%), the US (up nearly 25%) and China (up just over 6%). In addition, operating profits more than trebled to nearly SEK5.6bn (US$651m), while revenue for the first half year rose from SEK75.2bn to nearly SEK83.7bn. Bearing in mind that this period, notably Q2, included the end of V70 and the start of S90 and V90 production and the attendant disruption that this will have caused, this continued improvement in its financial results suggests that the company is very much on the right path.

A company rebornVolvo has almost completed its rebirth after its separation from Ford; this rebirth has been based on a global expansion of its manufacturing footprint, into China and the USA, the launch of a new engine programme (VEA, Volvo Engine Architecture, also known as Drive-E) and the development of two all-new vehicle platforms, SPA (Scaleable Platform Architecture) and CMA (Compact Modular Architecture). These new platforms will underpin the company’s strategy which includes making 800,000 vehicles a year by 2020, and 1 million units a year not long after that.

Two new vehicle plants and an engine plant are already in operation in China, the new engines are produced at Skovde in Sweden (as well as in China) and by the end of this year, three vehicles will have been launched on the SPA, namely the XC90 SUV and its sedan and estate siblings, S90 and V90. Construction of the US factory is under way and this will ultimately be the lead plant for the 60 series of vehicles – the new XC60 SUV and the sedan and estate variants, S60 and V60. The S60, V60, S90 and V90 are also each expected to produce a soft off-road version, with a CC designation, as is available on some of the current models.

Future manufacturing geographyFirst details of the second new platform, CMA, have also been released recently and this review examines both platforms, the models planned and the manufacturing arrangements, as currently known, as follows:

• Once the S90 and V90 are in production, along with the XC90, Torslanda (Volvo’s home plant in Gothenburg, Sweden) will share production of the new 90 series models with Volvo’s factory at Daqing in China

• CMA models will be made in Belgium at Ghent and at Volvo’s planned third plant in China, JV plant with Geely at Luqiao in Taizhou. There had been reports that CMA models would also be made at Volvo’s Chinese plant at Chengdu (which opened in 2013) but this plant may now focus on 60 series, SPA models.

Changing production geography for current rangeThe current V60 – which is based on an old platform – will switch production location in early 2017 from Torslanda to the Ghent plant in Belgium. This is to free up space in Torslanda for the S90 and V90 and is possible because the Ghent plant also produces the current S60 and XC60 which are made on the same (pre-SPA) platform as V60. As with most pressings for S60 and XC60, body pressings for V60 will continue to be made in Sweden and shipped to Belgium. The V60 hybrid will also become the first hybrid vehicle which the Ghent plant will make. One of the consequences of this will be that Ghent will be a truly flexible plant in terms of platform variety – with the XC60/S60/V60 range, the current (but soon to be replaced) V40 and the imminent XC40, Ghent will actually produce vehicles on three different platforms. It is understood that Volvo plans to have completed the move to CMA and SPA by 2019, or possibly the end of 2018.

Common model range approach in all segmentsAt the heart of the new model line-up is what Volvo calls its 3x3 approach, ie each of the three model series – namely 40, 60 and 90 – will have a sedan (S), wagon or estate (V) and SUV (XC); in addition, there will be sub-models, ie cross country (CC) for the S and V models and a long wheel base versions of the sedans for China (long wheelbase models are expected – as with the current S60L – be exported to the USA as well; indeed a Volvo spokesman in China has said that the S90 long wheel base version will be exported to Europe as well). CC models will be differentiated with a raised ride height and thicker tyres.

New powertrain approach; electric versions keyBoth platforms will include electric as well as hybrid models, and in a very ambitious aim, Volvo wants around 10% of its global sales to be fully electric by 2020. This will be essential in reducing its overall CO2 levels, as will the decision to eliminate large V8 or even V6 engines; all Volvo engines will be either four-cylinder diesel or petrol versions on the 60 and 90 series, with both four- and three-cylinder versions of its modular engine design being offered on the 40 series vehicles.

The Drive-E engines will have a maximum capacity of 2 litres in the four-cylinder configuration. The first vehicles to use these engines were the diesel versions of the current S60 CC and V60 CC models in 2015.

SPA – an overviewVolvo’s new platform approach was announced in 2011 when SPA was introduced to the world. On launch, the company said that 90% of the parts in the first SPA vehicle – the long awaited replacement for the old XC90 – would be new and the vehicle would also be between 100 and 150 kgs lighter than comparable models on current platforms. Significant investment was announced for all Volvo plants, notably at Torslanda where the first SPA models would be made – and at the pressings facility in Olofstrom.

At the heart of SPA has been the decision to fix the distance from the centre of the front wheels to the peal; this decision determined the fixing points for the front axles and the engines for all SPA models. This commonality of vehicle design – and of the manufacturing facilities making these models – represented an opportunity for significant cost saving. A number of other parts have fixed positions and dimensions on all SPA models, namely the front seat structure, the HVAC system and the front windscreen; again significant design and manufacturing systems costs – and time – have been saved as a result.

To reduce weight, far more use compared to outgoing models is made of aluminium or various grades of lightweight steel, especially in the front structure, doors, chassis and drivetrain; SPA models have some of the highest use of hot stamped, ultra-high strength steel in the industry. Given that SPA was designed to underpin all 60 and 90 series models, ie around two-thirds of the Volvo line-up, the company believes this platform – and the common engine platform – will save around 50% of development costs for a given vehicle. 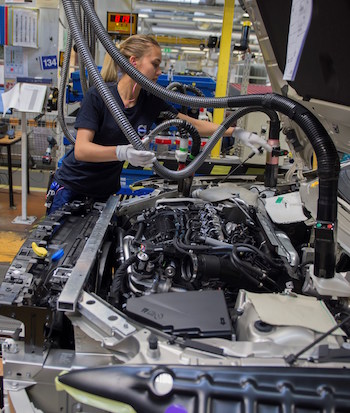 SPA model launch scheduleProduction of the XC90 began in 2015 and the V90 started production in June 2016 in Sweden; the V90 is the replacement for the aged V70 estate, while the S90 replacers the old aged S80 sedan.

The first 60 series models on SPA will begin production in later 2017, with the next XC60. The next S60 and V60 – based on SPA – will begin to appear during 2018. A full electric vehicle based on SPA will appear in 2019. And Volvo has some serious ambitions here – as well as 10% of its annual sales being electric – it wants to have sold 1m electrified cars (including hybrids) by 2025.

CMA – showcasing working with GeelyThis is a platform developed with Volvo’s parent, Geely, through a joint venture company called CEVT, China Euro Vehicle Technologies, based in Gothenburg. CMA will underpin replacements of the current V40 and V40CC, in hatchback and estate formats, as well launching the all-new XC40 and possibly in the long term a replacement for the previous generation S40. Volvo knows that the current range of V40 – the basic hatchback and the cross-country soft off-road versions – is insufficient and a much broader range is required in this car size. Volvo is currently undecided on the sedan idea but given the success of the Audi A3 and Mercedes-Benz CLA it has not dismissed it entirely.

The first model to appear will the XC40, and this will come with a 1.5 litre three-cylinder engine, based on the VEA architecture. The engine will be offered - as diesel and petrol versions - in both turbocharged and naturally aspirated formats, as well as in hybrid configuration; this is likely to use the T5 Twin Engine designation, but with an electric-only range of just around 30 miles. The CMA platform has been designed to allow a fully electric model as well as the hybrid version. The fully electric version will have a driving range of 220 miles. This will appear after the full electric SPA model which is due in 2019. The new 40 series models will compete against similarly-sized sedans, hatches and SUVs, ie the Audi A3 and Q3, BMW 1-series and X1 and Mercedes-Benz, A-class, CLA and GLA.

Volvo released first details of these new models in mid-2016 with Concepts 40.1 and 40.2, the former the SUV, the latter the hatch/sedan. Volvo was actually quite specific when showing off Concept 40.2 to emphasise that it was neither a hatch nor a sedan, sitting higher than a normal sedan, while Concept 40.1, the SUV, has a very distinctive front-end and, significantly – at least in the concept form – just three doors. Production versions of these concepts will all be on the road by the end of 2019.

Volvo’s R&D boss, Peter Mertens, told the automotive press when launching the 40.1 and 40.2 concepts that the CMA was flexible enough to allow for not just a variety of body styles and powertrains (including front- and all-wheel-drive formats) for the Volvo brand, but could also form the basis of Geely-badged models.It is also understood that as well as being made in Belgium, CMA models will also be made in China. In July 2016 reports in China suggested that a third Volvo plant would be opened in the country, at Luqiao, in Taizhou. Construction of this plant had actually begun last year – by Geely – but Volvo is now also involved and V or 40 series models will also be made there. Capacity of 200,000 units a year is being installed, following an investment of RMB12.1bn. Geely and Volvo models will be produced here, with between 50-60% common components. Although Geely models will use Volvo underpinnings they will look very different and be less highly specified; according to Hakan Samuelsson, Volvo’s CEO, Geely will be to Volvo what Skoda is to Audi.

The new CMA models and joint Geely-Volvo production plans is leading to a renewed boost of supplier investment in China. For example, Magna has announced it will be open a new seat factory in at Taizhou near the new Geely-Volvo factory.