Now in the hands of Geely, the Swedish OEM is expanding its manufacturing footprint in China and the US

Volvo, one of the most iconic and best-known Swedish brands, is also the last Swedish car company, following the demise of Saab. Now owned by Chinese OEM Geely, Volvo is a small automotive manufacturer relative to the likes of VW and Toyota. Even so, it can genuinely be considered a global operation, with its Swedish and Belgian factories now joined by two new vehicle plants and an engine plant in China, plus a US vehicle plant coming on stream in 2018.

Speaking at the 2015 Automotive News Congress in Birmingham, Volvo’s CEO, Hakan Samuelson, explained how the new Volvo started life in 2011, when it was sold by Ford to Geely. Since then, Volvo management has focused on creating a new company with three new brand values, namely: cars that understand you (through intuitive vehicle connectivity systems), protect you (through advanced safety systems) and make you feel good (by being environmentally leading edge, as exemplified by the Twin Drive version of the XC90).

The bodyshop at Volvo Chengdu makes the S60L and XC60
Re-branded & re-engineered
Volvo is being re-branded and re-engineered from top to bottom, with all-new or thoroughly modernised factories and brand new platforms for a 21st-century model line-up. At the heart of this is the SPA platform (Scalable Platform Architecture), which underpins the new XC90 and will also underpin all new large Volvos. In addition, Volvo is now working on a second platform, CMA (Compact Modular Architecture), together with its owner, Geely. The CMA will underpin the next V40 and other Volvo models of this size, as well as C-segment and smaller vehicles for Geely.

When SPA was announced in 2013, Volvo’s head of R&D, Peter Mertens, said that it would allow Volvo to be “nimbler, different and better than high-volume car companies”. SPA vehicles are intended to share more than three-quarters of their non-visible underbody parts; with SPA, the critical issue was fixing the position of the centre of the front wheels relative to the pedal. In addition, SPA uses much more aluminium and boron steel than were used on equivalent parts in the past; the front structure, doors, much of the chassis and drivetrain all use far more aluminium than before, while the safety cage of the new XC90 uses 40% boron steel compared with less than 10% boron steel on the old model.

Further details on each Volvo plant are set out below:

Gothenburg (Torslanda) is Volvo’s main vehicle factory and at present it produces the S60, V60, V70, XC70, S80 and the all-new XC90 models. The S60 is also made in Belgium. Gothenburg has been working on a three-shift, five-day a week basis since May to meet demand for the new XC90, and indeed stronger than anticipated demand for some of the older models. 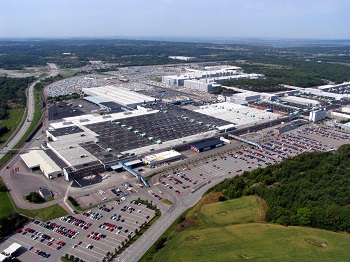 Torslanda has been working on a three-shift, five-day a week basis to meet demand for the new XC90
Gothenburg has a press shop, with four press lines and nearly 30 presses in total, supplied by Mecfond or Muller-Weingarten. There is a second, much larger, press shop at Olofstrom, south of Gothenburg, which has 19 press lines. Olofstrom and Gothenburg supply Volvo Ghent, which does not have such facilities. Gothenburg’s bodyshop is almost entirely automated, with around 650 robots in two welding lines, one for the XC90 and one for other models. By contrast, the final trim and assembly areas are mostly manual, with automation here limited to the glazing operations, including a new glazing cell for the XC90.

Although Volvo does not produce components in Gothenburg (or in Ghent), it assembles axles and complete drivelines, which are sequenced before being delivered to the assembly line. Gothenburg has also recently taken in-house the assembly of the headliner and tunnel console from JCI.

Volvo’s engine plant is at Skovde, east of Gothenburg. This plant can make 450,000 engines a year and has full machining and assembly capability, but buys in all its castings from Germany, for blocks, heads, crankshafts, camshafts and conrods. It currently supplies some engines to Ford under an old cross-supply arrangement dating back to the days of Ford ownership, when the American OEM also supplied some engines to Volvo.  Cross-supply in both directions has reduced in recent times and will surely end within two years, if not before.

Until the recent investment and growth in capacity at Gothenburg, Volvo Ghent used to have a higher capacity than the Swedish plant; Ghent’s capacity is 270,000 units per annum, compared with Gothenburg’s capacity now of 300,000. In 2014, Volvo Ghent assembled just over 264,000 vehicles, a mixture of V40, S60 and XC60. With its key pressings and almost all engines coming from Sweden, Volvo Ghent is an assembly operation, with a body welding shop, paint shop and final trim and assembly line. It is supplied by a complex network of just-in-time and sequenced suppliers, with over 40 such suppliers within a 100km radius, many much nearer. Sequenced supply parts include bumpers from Plastal, exhausts from Tenneco, fuel tanks from Kautex and door panels from Faurecia.

New compact platform
As Ghent will focus on models made on the new CMA platform from 2017-2018 onwards, the replacements for the S60 and XC60 will be made elsewhere, in Sweden, China or the US. Ghent will, however, produce the replacement for the V40, plus a sedan version and an SUV, expected to be called S40 and XC40 respectively; a soft-road version, V40CC, is also expected to be made in Belgium, as is the case for the current model.

Ghent will be the sole global plant for Volvo models made on the CMA platform, so it will have worldwide supply responsibility, including for cars destined for the US and China. Even so, it remains to be seen if the V40/S40/XC40 model range will be sold in sufficient numbers to fully utilise the factory’s capacity. In the past, Volvo has needed to make some of its larger models, the V70 in the past and S60/XC60 currently, in order to fully utilise Ghent’s capacity.

It is worth noting that Volvo has said on more than one occasion that it will not produce models below the C-segment, ie smaller than the V40 and potential derivatives. Moreover, although Geely will also use the CMA platform, Hakan Samuelson has made it very clear recently that Geely and Volvo will remain separate entities; accordingly, it is highly unlikely at this point that Geely cars will be made in Ghent. As a result, the V40 successor and its derivatives need to be global successes for this plant to have a secure long-term future as a solely Volvo operation.

Volvo has had a production arrangement with Ford’s partner in Chongqing for many years. This plant used to assemble the now-defunct S40, alongside the S80; this large model is still assembled in China, but only in low volumes, below 5,000 units per year, and production of the S80 will soon end. One of the two new Volvo plants in China, at Daqing, will start making the S90, the replacement for the S80, in 2016 or 2017. Under Geely ownership, Volvo has begun to develop a significant manufacturing presence in China, with two vehicle plants and an engine factory. 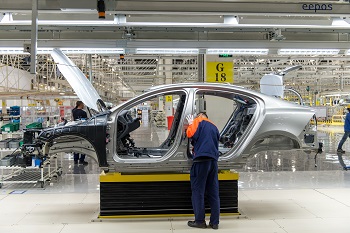 The S60L was initially made at Chengdu for the Chinese market but now is also exported to the US
Increasing local content
The first car plant to open was in November 2013 at Chengdu in the south-west of the country. This factory makes the S60L (a stretched version initially made for the Chinese market but which is now also being exported to the US), plus the XC60 for the local market. It is a fully integrated plant, with its own press shop, and an initial capacity of around 120,000 units per annum.

Chengdu is supported by over 110 local suppliers, including Chinese operations of European or American suppliers which have long supplied Volvo in Europe. These allow Volvo to achieve a local content for the S60L of around 50% by value; future models will benefit from a purpose-designed local supply chain from the very beginning and are expected to achieve between 70% and 80% local content, including local engine supplies.

Also in late 2013, the Zhangjiakou engine plant started production, this being Volvo’s first engine plant outside Sweden. A second car plant, in Daqing, north-east China, started operations in November 2014, initially assembling the XC Classic; this is the original XC90, now sold in the Chinese market only, using a mix of Chinese and Swedish sourced parts. The plant has an initial capacity of 80,000 units per annum, and will soon switch to the SPA platform, almost certainly making the S90. Output could be increased to 300,000 units per year in the long run.

After many months of speculation and press rumour, in May 2015 Volvo announced the location of its first North American plant, at Ridgeville, near the port of Charleston in South Carolina. Other locations which were considered included seaport sites in Georgia, North Carolina and Virginia. Choosing a location which was near to a deep-water seaport was essential, as this plant will have a global supply role and will not just supply the US market. It will also import fully assembled engines from Europe, and Volvo did not want to have to transport these for long distances across the US. 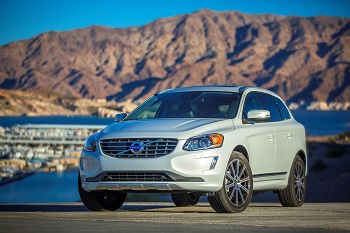 The XC60 is one of the models that might be produced at the Volvo plant in South Carolina
Volvo plans to invest $500m in this new factory, although it is also due to receive around $200m in incentives and tax breaks from local and South Carolina state government bodies. The plan is for the first vehicles to roll off the assembly line at the end of 2018. Initially, the factory will have an annual capacity of 100,000 units and employ 2,000 people when running at full production rates. However, Volvo has also spoken of employing 4,000 in the long run, so it seems likely that much higher output has been factored into this plant and its construction planning.

Build where you sell
Officially, Volvo has not yet confirmed which vehicles it will make in South Carolina, although it has said that they will be based on its large SPA platform; moreover, a Volvo spokesman has said that the US-made vehicles will be those with the highest sales in the country, but not the XC90. This implies strongly that either the S60 or XC60 or possibly both will be produced in Ridgeville. Engines for these vehicles will be imported from Sweden, because until production reaches 300,000 units per year in the US, it will not be worth building an engine plant. Even so, local content should be 55-60%, with proximity to existing BMW and Mercedes suppliers in the southern US an important factor in determining the plant’s location.

The opening of the new factory in North America will complete a remarkable turnaround for Volvo. For many years, it was ill-positioned within Ford’s Premier Automotive Group, lacking management independence to define its own future and hamstrung by corporate policies on powertrain sourcing and other systems. It was loss-making and lacked direction. Now, freed of such corporate shackles, it has been given the funds and independence by Geely to re-define itself, launch new models and become a global manufacturer.

According to Hakan Samuelson, Volvo will be making significant profits on a sustained basis by 2020; explaining the company’s strategy and re-branding to the Automotive News Congress in June, he added that it would not matter if this desired improvement in profitability arrived a year or so later. Geely, it would appear, is in it for the long haul. Volvo is not simply setting out to copy the German premium brands, but to carve out its own space in the premium sector. So far, the signs are that it will indeed do so.