For a company which has largely eschewed partnerships, as it battles with VW for the no.1 spot in the global rankings, Toyota is now embracing alliances as a means of continuing to grow 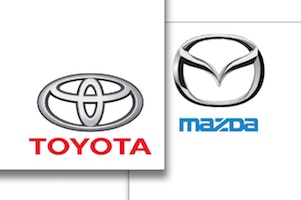 In the Czech Republic, Toyota has operated a production JV with PSA for several years, producing A-segment cars for Europe; meanwhile PSA produces vans with a Toyota badge in France.

At the start of 2017, Toyota announced a technology sharing alliances with Suzuki in India; and in August Toyota said it would build a plant in the US with Mazda, producing both conventional vehicles and in the long term the companies will focus on co-development of electric cars, autonomous technology and related systems. The companies’ new US$1.6bn factory which will open in 2021, producing the Toyota Corolla and a Mazda SUV, with capacity of up to 300,000 vehicles a year.

Significantly, while the PSA alliance is purely a manufacturing arrangement, and while the Suzuki announcement hinted at a closer relationship in future, the Mazda alliance specifically includes both companies taking modest stakes in each other. This is similar, although on a much smaller scale, to the Renault-Nissan alliance. Toyota will take a 5.05% stake in Mazda, while Mazda will take a 0.25% stake in Toyota, the ratios indicating their relative sizes, the shareholdings being equal in value.

The benefits for Mazda are clear – it will gain access to Toyota’s substantial R&D resources (Toyota reportedly spends close to 1trn yen per year on R&D whereas Mazda spends just 140bn yen) and it will return to producing vehicles in the US. However, quite what the benefits for Toyota will turn out to be is another matter. Official company statements announcing the alliance emphasise how it will strengthen a lasting partnership, but also not how the capital alliance will preserve the companies’ independence and equality.

The decision to make the Corolla in the new US plant has implications for Toyota’s new plant currently under construction in Mexico. This was due to make the Corolla, one of Toyota’s key models in the US. But Toyota is, like all vehicle companies operating in North America, undoubtedly wary of the capricious nature of the incumbent President and his objections to cars being imported tax-free from Mexico. Although the location for the new factory has not been announced, it will likely be somewhere in the US southern states, possibly close to Mississippi where Toyota already has a plant making the Corolla. Locating two Corolla plants close to each other would make sense, potentially saving significantly on logistics costs.

Logical though placing two Corolla plants close to each other may be, Toyota still had to find something to put into the new Mexican plant; this will be the Tacoma pick-up, which is already made in a capacity-constrained Texas plant. The distance between the Texan and new Mexican plant is around 700 miles, or more than 12 hours’ drive; however, were Corolla production to be split between Guanajauto and Mississippi, the distance would have been over 1500 miles and at least 26 hours by road, with a significant increase in logistics costs, for Toyota or suppliers. So perhaps Toyota’s gains are twin-fold: a significant logistics saving, with attendant supply chain efficiencies, and secondly the unquantifiable political gain from investing more in the US at the same time.