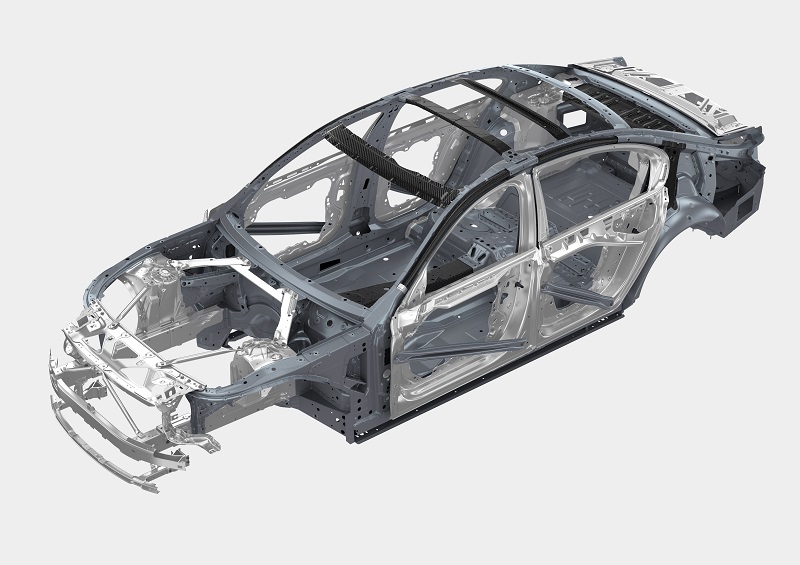 Incorporating composite components into automotive structures – joining them to other composite parts and, perhaps more importantly, to parts made from metals – presents a new set of challenges. Resistance spot welding has been used by carmakers to join metal structures for many decades; a typical vehicle might contain anything between 2,000 and 5,000 spot welds. The process is inexpensive (around $0.05 per weld), rapid (less than one second per weld), easy to automate and there are no per-weld consumables. However, resistance spot welding cannot be used to join composite parts.

An obvious solution would be to incorporate metallic elements into the composite part during manufacturing, which would enable the use of conventional joining methods. However, these transition joints present significant design challenges in parts which are exposed to high mechanical loading.

Going to glue for CFRP
Adhesives have been used by several carmakers in an attempt to solve this problem, and it is the go-to method for thermoset-based CFRP-to-CFRP joining. To join the loops of CFRP (carbon-fibre reinforced plastic) which make up the chassis of the Hyundai Intrado crossover concept, the South Korean carmaker’s partner on the project – Axon Automotive – opted for Scott Bader’s Crestabond M1-20 structural adhesive.

Loops of CFRP, joined by structural adhesive from Scott Bader, make up the chassis of the Hyundai Intrado crossover concept
Kevin Lindsey, technical director for Axon Automotive and its parent company Far-UK, says: “Significant additional weight savings were achieved in the final assembled chassis by being able to bond all the sections together.” According to Lindsey, the adhesive demonstrates a good combination of high load-bearing adhesion strength, flexibility, toughness and impact resistance, even at low ambient temperatures.

To assemble the chassis, including the bonding-in of a number of steel and aluminium brackets, the adhesive is applied using a robotic system in combination with a bulk dispenser and a pneumatic gun – a system that Axon has found to deliver consistent results in a cost-effective manner.

"Significant additional weight savings were achieved in the final assembled chassis by being able to bond all the sections together"
– Kevin Lindsey, Axon Automotive

The i3’s CFRP monocoque consists of far fewer components than comparable metal structures and these are joined in a fully automated process using ABB robots with adapted control systems and fittings. As no sparks are being produced by welding, the protective cages around these robots are made from wood and flax.

The total bonding length per i3 body is 173 metres. Each stage of the bonding process is activated by lights and monitored by cameras. In joining an inner and outer sideframe, one robot cleans the bonding lines with a saturated felt pad, which is replaced between jobs, and a second applies the polyurethane adhesive (Betaforce from Dow Automotive Systems). Another pair of robots presses the two components together while the adhesive is cured.

BMW has succeeded in reducing hardening times and the adhesive is workable for just 90 seconds after application. It achieves full strength 90 minutes later – a tenfold acceleration over conventional times. A supplementary thermal process – applied via a series of small heat lamps mounted on the end-effectors of the robots – is used to bring the hardening time under ten minutes. 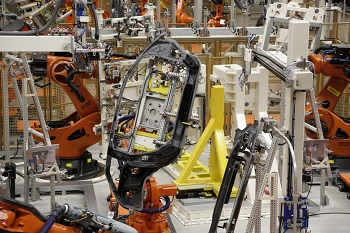 Each stage of the bonding process for the i3 is activated by lights and monitored by cameras. Total bonding length is 173 metres
Joining composites to metal
Adhesive bonding is also an effective method for joining composites with metal components, and can provide protection against galvanic corrosion. Lotus' Elise and Exige models are built around an anodised aluminium tub and feature a composite front module, which protects the tub in low-speed crashes (up to 40km/h) and features a number of integrated functions, including auxiliary light mountings, a heater intake and a tow-bar mount. These two components are bonded together using Betamate 2810 from Dow Automotive Systems.

Lotus also uses Betamate 2800 series adhesives in the production of its Evora model to bond the composite structural body panels – the windscreen surround, roof panel, rear bulkhead and body sides – to the car's aluminium tub. Lotus is producing around 1,000-2,000 of each model per year. The production rate of the i3 is significantly higher, but at around 20,000 units a year it is still relatively low for the automotive industry.

Several years ago, the 'Big Three' US manufacturers – General Motors, Ford and Chrysler – determined that adhesive bonding alone would not satisfy the demands of high-volume automotive production, owing to the relatively high cycle times associated with the process, its incompatibility with existing bodyshops and lingering doubts over its structural performance.

Working as the Automotive Composites Consortium (ACC), the three carmakers developed a single-piece, structural sheet-moulding compound (SMC) underbody, which could replace over 14 steel stampings and fasteners while demonstrating improved performance and safety, and reducing weight – all at an acceptable increase in cost. To join this underbody to the predominantly steel passenger compartment of the body-in-white, the consortium employed a weld bonding method, which involved the use of a steel doubler strip.

This doubler strip formed the outer layer of the join, with the underbody edge in the middle and the vehicle’s steel structure as the other outer layer. Holes were laser-cut in the composite part at predefined locations along its edge, and the doubler strip featured dimples which aligned with these holes.

An adhesive was applied to the composite, which was then positioned between the two steel layers, with the convex side of the doubler strip’s dimples penetrating through the holes in the composite so they came into contact with the steel vehicle structure. The doubler strip was spot welded to the steel structure at each dimple location, and then the assembled part was placed in an oven to cure the adhesive.

Ford is now using adhesive bonding – in conjunction with self-pierce riveting and flow-drill screws – to join the body of its aluminium-intensive F-150. The company’s plant in Dearborn is producing 1,200 of these pick-up trucks a day, although it had to transform the bodyshop there in order to do so – a massive investment that other carmakers might not be willing to make.

Self-pierce riveting is one of the most widely adopted mechanical joining methods and is used in a variety of other aluminium-intensive vehicles, including Jaguar’s XJ, XK and F-Type. The process produces joins which are strong enough to be used for structural applications and can be highly automated.

Using the single-step technique, a semi-tubular rivet is punched into two sheets of material. The rivet pierces the upper layer of material, and as it does so it forces the lower sheet material into a die and radially flares, forming a mechanical interlock. Pre-drilled holes are not required, allowing a high-strength joint to be formed in a single operation, and it causes little or no damage to pre-coated materials. Furthermore, the method is compatible with adhesive joining, enabling the methods to be used in conjunction.

However, for self-pierce riveting to be employed successfully, the lower sheet material must be ductile enough to form a ‘button’ (a protrusion) on its obverse side, which provides the mechanical interlock in the joint. CFRP parts are not ductile enough to form this button, and their reinforcing fibres may be exposed through cracks in this surface – reducing the durability of the joint. Similar problems are encountered when CFRP parts are joined using other mechanical techniques, such as through clinch joints and flow-drilling processes. 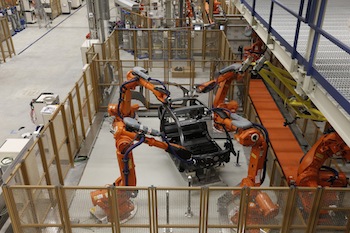 The i3 production at BMW Leipzig is highly automated
In a recent patent (US 2015/0217510), Ford describes composite parts that are free from fibres in predetermined locations. These parts can then be connected to others using mechanical joining methods. This can be achieved by using woven fibre mats which feature openings in the desired locations of the fastener receptacle areas. When the mat is injected with resin, the fastener receptacle areas remain free from fibres.

The mould is then injected with a resin matrix, which fills the interstitial areas between the loose fibres and also fills the voids. The density of fibres in the void areas should be less than 10% of that in the other parts of the resin matrix, yielding a fastener receptacle area.

Using wet pressing and hybrid pressing
BMW has adopted an entirely different approach to incorporate CFRP into the chassis of its 2015 7-Series. Here, the composite is used to produce the roof bows, to reinforce the roof frame, the B- and C-pillars, the sills, the centre tunnel and for the rear shelf.

At its plant in Dingolfing, Germany, the company uses two production processes which it claims are economical for the production of up to several thousand CFRP components per day: wet pressing and hybrid pressing. In wet pressing, carbon-fibre fabrics or netting impregnated with resin are pressed in a 3D moulding die while wet, and are then cured, eliminating the need for the dry preforming step employed in resin transfer moulding (RTM) processes.

In hybrid pressing, carbon-fibre fabrics impregnated with resin – also still wet – are placed in a moulding die with sheet steel, then pressed and hardened. This bonds the steel and the CFRP together to form a hybrid component which is both light and stiff.

A similar hybrid process is being developed by researchers at the Institute for Lightweight Design with Hybrid Systems (ILH) at the University of Paderborn as part of a project supported by Audi and CFRP mass-production specialist Benteler-SGL (a joint venture between Benteler Group and BMW's partner on the i models, SGL Group). 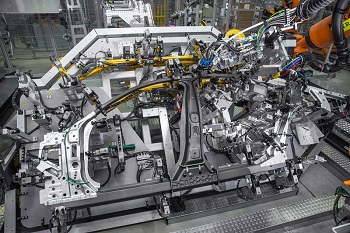 BMW uses wet pressing and hybrid pressing to incorporate CFRP into the chassis of its 2015 7-Series
The ILH process enables the production of sheet-metal parts reinforced in specific areas with CFRP patches, without the need to join the two materials using adhesives, rivets or screws. Using this process, a robot introduces formed sheet metals into a mould. Then a tailored epoxy prepreg is placed into the mould and pressed by a heated punch onto the sheet metal. At a tool temperature of 180°C and a pressure 0.2-0.5N.mm, the prepreg is then pre-cured in the closed mould in approximately 120 seconds. The final curing of the epoxy resin occurs in a later cataphoretic painting process.

The use of the matrix epoxy as an adhesive to bond the sheet metal and the CFRP makes an additional joining process superfluous, according to the ILH researchers.

Heading towards a hybrid method
This hybrid approach to producing CFRP and metal structures is gaining a lot of traction. In late 2014, machine and plant manufacturer Siempelkamp announced that it would supply a 2,500-tonne press to the Open Hybrid Lab Factory (OHLF) eV, a research centre set-up by Volkswagen (VW) in Wolfsburg in 2012 – and supported by Germany’s Federal Ministry of Education and Research – to develop technologies for the mass production of lightweight, hybrid structural components.

OHLF boasts a 799 sq.m laboratory, a 2,500 sq.m technical centre and 4,692 sq.m of office space. In addition to VW and Siempelkamp, the partners involved in the centre include the Technical University of Braunschweig, the Fraunhofer Institute, Engel, Magna, BASF, DowAksa and Thyssen-Krupp.

The potential of the approach is significant. According to Siempelkamp, an unfinished vehicle body – which is currently made of 200-300 individual components of various materials – could be manufactured from 20-30 hybrid components in the future.