Zaragosa has been the European Opel/Vauxhall centre of small-car production for over three decades. Fresh investment and the addition of Opel-PSA B-segment MPVs could bring the factory close to full utilisation 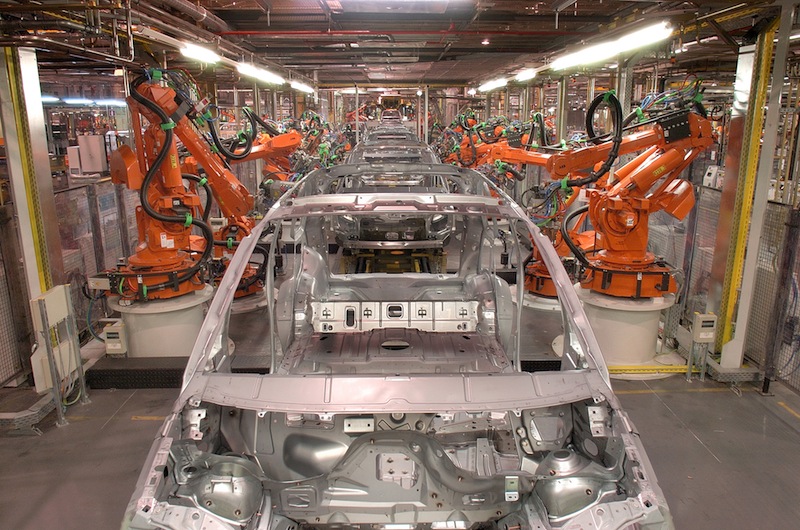 Opel Zaragosa in Spain produced its first vehicles in 1982, since when it has developed into the centre of production for small cars within GM Europe. Although some Corsas are also made at Eisenach in Germany, and the Agila was made under contract by Suzuki in Hungary until recently, Zaragosa has produced the vast majority of Opel/Vauxhall’s small cars in Europe for more than three decades. In addition to the current range of the Corsa, Meriva and Mokka, plus previous versions of the Corsa and Meriva, the factory has also made:

The plant employs nearly 5,500 people, of which over 4,800 work in manufacturing, and received more than €4.5 billion ($4.9 billion) of investment to the end of 2014. During 2015, just under €50m was invested in a range of equipment upgrades. With an annual capacity – on a three-shift basis – of 480,000 vehicles, the plant is GM’s largest in Europe and, by some measures, its largest worldwide. Currently, it makes the Corsa in three-door, five-door and van formats, the Meriva MPV and the Mokka SUV.

Zaragosa is a fully integrated factory, with its own press shop, bodyshop, paintshop and general assembly line, and when running at full line speeds, it turns out one finished vehicle every 36 seconds. The site covers a total area of 3.15 sq.km, with a roofed area of nearly 606,000 sq.m. The complex has around 17km of railway and 12km of road.

Press shopThis has 16 press lines, supported by six blanking lines, and processes around 1,000 tonnes of steel per day to make 260 different parts. Inter-press handling is performed by 79 robots.

BodyshopThis facility, which covers nearly 100,000 sq.m, produces 77 different sub-assemblies – 38 for the Corsa, 22 for the Meriva and 17 for Mokka – with 1,221 robots performing an average of 3,900 spot welds per vehicle. The quality of the welds and the bodies’ dimensional accuracy are tested by 149 on-line cameras, checking 65 points on the Corsa, 51 on the Meriva and 50 on the Mokka.

PaintshopThis has a five-stage process, consisting of: two parallel phosphate lines; two parallel electro-coat lines; two PVC and sealer lines; one primer line; and three basecoat and clearcoat lines. Covering 107,000 sq.m, the facility is largely automated, with 76 robots. There is a painted-body buffer facility which can hold over 280 units.

One line assembles the Mokka and Meriva at 46jph, another makes the Corsa at 59jph

Final trim and assembly shopThe general assembly hall has two parallel lines, each running for 5km. Line 1 assembles the Mokka and the Meriva, while Line 2 assembles the Corsa. The current line speed for the facility is 105 jobs per hour, with Line 1 running at 46 jobs an hour, while on Line 2, the rate for the Corsa, which is smaller and generally simpler to make, is higher, at 59 units per hour. In terms of finished vehicles per day, the production rates (as at November 2015) are 1,120 Corsas, 260 Merivas and 390 Mokkas. Like most assembly lines, the final trim facility involves mainly manual labour, although there are 18 robots for a variety of material- and component-handling functions.

Lines 1 and 2 operate on two shifts, between 6am and 2pm and 2pm and 10pm. The night shift, which began in February 2015, runs from 10pm to 6am and is flexible, working on either Line 1 or Line 2 according to demand. In 2015, the assembly lines were modified to allow for increased model variability, and in January that year the Corsa van was added to the production line-up, followed by the LPG Corsa in early March, and the LPG Mokka in September. In parallel with this, the plant has been working to prepare for the 2017 manufacturing launch of the Opel-PSA B-segment vehicles.

Opel Zaragosa is one of the most significant employers in the Aragon region, where the automotive industry accounts for 17% of gross added value and over 21% of GDP. There are around 300 direct suppliers in the region, employing 28,000 people directly, as well as many more in the tier-two and tier-three levels of the supply chain. These include some of Europe’s major component suppliers: Alumalsa, ArcelorMittal, Bosal, Brembo, Copo, FagorEderlan, Fujikura, Gestamp, Irmscher, JCI, Lear, Mann & Hummel, TI Automotive and Valeo.

Within the Opel plant, there is an interesting employment strategy underway to reduce the average age of its workforce. Plans have been agreed with the unions and regional government to replace over one quarter of the current workforce by 2018, a process which will add 1,400 new recruits. Current employees born between 1954 and 1957 will move into partial retirement as part of this process.

Opel Zaragosa claims the following production milestones:- In 1988, it became the first car plant worldwide to operate on three shifts- In 2007, it produced its highest-ever volume: 485,857 units- In 2012, LPG vehicles were added to the production line-up- In 2013, it received a contract to make new B-segment MPV’s for both Opel and PSA from 2017.- In 2014, it started production of the fifth-generation Corsa, as well as a heavily revised Meriva and kit-based assembly of the Mokka SUV- In 2015, it produced its 12 millionth vehicle.

Zaragosa has been ISO 14001-compliant since 1999 and has also been certified by the EU’s Eco-Management and Audit Scheme. Zaragosa is the only one of GM’s European plants with this accolade and is, along with Mercedes-Benz van plant in Vitoria, one of only two plants in Spain to have won it.

The Zaragosa factory has also been certified as landfill-free, and since 2012 it has been ISO 50001-compliant – covering systems energy management – with all of the plant’s electricity supply coming from renewable sources, or high-efficiency schemes.

Helping Zaragosa to deliver the MokkaThis B-segment SUV was originally scheduled to be made only in Korea, but stronger than anticipated demand across the world (including for the Chevrolet Traxx, which is the essentially the same vehicle) and a lack of capacity to expand in Korea meant that the Mokka was added to the production roster at Zaragosa. Manufacturing began in 2014, which was a year of major challenge for the plant, as it had to accommodate three production launches: the upgraded Meriva in January, the Mokka in September and the new Corsa in November. In the background, work continued to prepare for production of the next Opel and PSA B-segment MPVs from 2017.

The decision to allocate the Mokka to Zaragosa was made in July 2013, and in little over a year the plant was ready to make the vehicle. Key to this was the way in which Zaragosa’s supply-chain team worked with logistics provider GEFCO4PL to design an all-new supply chain to bring components from Korea to Spain, something which had never been done before. Initial production was purely a CKD operation, but localisation of components has increased steadily since the start of production in 2014. Local sourcing is now 60% and should rise further in due course. 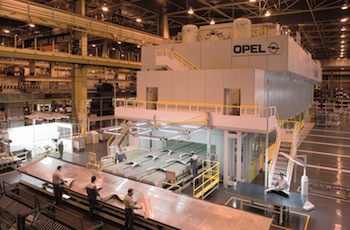 Components from the GM Bupyong plant in South Korea are shipped to Barcelona for onward shipment to Zaragosa; deliveries now take five weeks. On arrival in Barcelona, Maersk moves the containers to a railhead inside the port complex, with TCB Railways sending daily trains from Barcelona to Zaragosa; the size of the Mokka programme has transformed the inland maritime goods terminal at Zaragosa (TMZ) into the second biggest inland maritime goods facility in Spain. From TMZ, Maersk transports the containers by road to what Opel calls the DECON. On occasion, containers marked as urgent will be moved by road, as this is quicker for small loads.

Operated by SESE, the DECON (Deconsolidation and Consumption Regulation Centre) covers 30,000 sq.m on an industrial estate near the Zaragosa plant. The DECON is responsible for ensuring that parts are delivered to the factory as required and uses scanning systems to manage the inventory it holds. The warehouse holds a security stock of one week’s worth of component and runs on a three-shift basis to respond to Zaragosa’s fluctuations in production.

Press shop: €5m to automate one of the press lines which produces Mokka parts

Bodyshop: €5m on Framing Line 1; €3.9m for an electro-monorail side-panel conveyor; €400,000 for improvements to the Corsa tailgate cell; and €13.7m for the construction of two new buildings. In addition, €350,000 has been invested in non-contact robotic scanners in the body-protection stage.

Paintshop: €4m to replace three Spraymate machines, with four robots per booth; and €6.2m to replace a range of control equipment. A notable investment has been to replace the electrostatic machine which applies the base colour layer, leading to savings in the compressed air, paint and solvent used during the paint process, especially the colour changes.

General assembly: €8m to install and commission some of the first equipment for the future Opel-PSA, B-segment MPVs; €2.3m for a new dual engine line; €2.5m for a new cockpit assembly cell; and €0.4m for gearbox oil filling on Line 1.