Not content with installing the first PXL technology in the VW Group, Skoda has now opened a second servo-mechanical line which is capable of producing large aluminum components. AMS went to see it in action 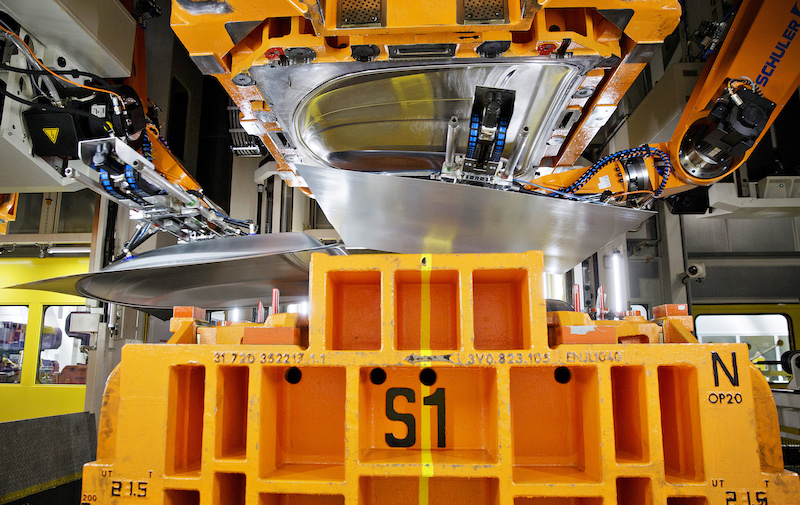 Mladá – or “Young” – Boleslav seems an ironic name for a city where even the automotive production counts as antique. But over the past few years, Skoda’s oldest plant, which converted from motorcycle to car production around the turn of the 20th century, has pioneered state-of-the-art press shop technology within the Volkswagen Group. In March, this northern Czech factory began full production on the second of two servo-mechanical PXL press lines which ramp up capacity while reducing energy consumption and, most interestingly, will enable the future production of aluminium bodies.

Speaking at the inauguration of the newest line in January, Michael Oeljeklaus, Skoda’s board member for Production and Logistics, described the press as “one of the most modern of its kind in Central Europe”. He continued: “In addition to its exemplary energy efficiency, thanks to decentralised servomotors, it also enables a particularly flexible production process and significantly shorter changeover times.”

The PXL II line was supplied by Schuler and installed over nine-and-a-half months in 2016, followed by a three-month trial period ending in February. The material utilisation has now risen to 96% from 70% and, according to Skoda’s head of press shops, Marek Karaffa, the target now is to maintain this rate. The machine alone cost €46.3m ($49.0m) out of a total expenditure of €86.4m and Karaffa admits that it is “very difficult to say” when the investment will pay off.

However, the technical specifications of the new line are impressive: a top speed of 18 strokes per minute; tool changeovers in just four minutes; the capacity to produce 23,000 parts per day; and energy savings of 15% compared with conventional systems. The greater productivity of PXL II is illustrated by the fact that it has replaced not one but two older lines; Karaffa says it is perhaps even equivalent to three.

Skoda is running the new line on 12-hour shifts, seven days a week, after hiring an extra 140 personnel to bring the press shop workforce up to 1,000, so clearly it intends to squeeze the maximum benefit from this new technology. The significance of this goes far beyond Mladá Boleslav itself; this plant is the driving force behind Skoda’s entire production network, as the three press shops here not only supply its own body operations but 100% of the parts required by the Kvasiny factory, where SUVs are now being produced, plus facilities outside the Czech Republic.

Most press lines stay in place for at least a few decades, owing to the high capital outlay required, but this new technology even more than most has been purchased with an eye on the future; although it only handles steel at the moment, it is fully capable of producing aluminium parts. At whatever point the plant needs to start making vehicles with aluminium content (one wonders if this could be for the VW Group, or else a new SUV at Kvasiny), its pressing and stamping operation is already prepared.

Moving from one century to anotherIn order to install PXL II, Skoda demolished a press shop from the 1950s, decommissioning two old lines which were then auctioned off to a German company. While the new press line was being built, Skoda shifted production to other facilities onsite as well as VW Group plants. The structures of the new press, weighing 190 tons in total, were transported by road and along the River Elbe before being installed in an 11,600 sq.m hall that was completed in June 2016 after six-and-a-half months of construction (watch the video here). At 45 metres across, the new M4 building is the widest hall at Skoda and has a basement measuring 18,000 cu.m for the storage of scrap metal before shipment back to the steelworks.

At the front end of the hall is a storage area for the steel, provided by some of the eight companies supplying coils to Mladá Boleslav. Stacks of about 500 sheets wait at the head of the line to be fed into the first station, after being cleansed by two machines at the side. The line has six stations and contains Kuka robots which transfer the parts from one to the next using magnetic “suckers” on the end of their arms. Next to the line are racks of more such blue and yellow tools, tailored to the various parts being produced. Adjacent to these is a monumental stack of dies for the different models, organised by colour. A crane hangs overhead to manoeuvre them in and out of storage.

The press has a bed size of 4,500mm x 2,400 and 4,500 x 2,200 and produces large stampings such as side panels and bonnets. It boasts a total pressing force of 81,000kN from six gears – the first generating 21,000kN and the other five providing 12,000kN. The pressed parts emerge from the end of the line on a conveyor and are checked by hand. Following a zonal control method, four workers use polishing cloths to make sure that the surfaces are uniform. According to Karaffa, this process takes several minutes and 100% of the parts are verified in this way. He says Skoda would like to introduce automated systems, noting that there is a Czech company which produces suitable robot heads, but for now the laboratory results cannot be matched on the line. After the parts have been checked, they are placed on racks and moved by forklift truck into a storage area. Most are destined for Kvasiny.

And from one generation to the nextThe key leap forward with this pressing technology – first brought to Mladá Boleslav in 2012 with PXL I but now in its third generation with PXL II – is that it is servo-mechanical and provides a high level of control throughout the pressing process. The 14 servomotors are decentralised and therefore independently govern the different stages of the line. Meanwhile, the servo drives recuperate energy and can protect the line against a temporary outage. Whereas a conventional drive accumulates energy in a flywheel, the new system boasts an asynchronous motor which operates against the driving motor, with a maximum revolution of 1,250 1/min. The most energy-intensive movement of the ram (lowering) triggers the rotation of an energy accumulator, which then acts as an energy generator during the less energy-intensive movement (the stroke). There are seven accumulators per line, or one per two motors.

The result is a very adaptable, easily regulated system with reduced as well as more secure energy consumption when compared with conventional presses. As Karaffa explains, it is “a big advantage” of servomotors that the energy use can be controlled in this way because it ensures that production is continuous.

"We want to progress in aluminium. We are just waiting for the right decision at the right moment” – Marek Karaffa, Skoda

The automated changeover also generates a huge improvement in efficiency and, says Karaffa, “a great deal of flexibility”. Whereas the presses from a few decades ago required a “manual” changeover (with the assistance of a crane) which could last about one hour, the new press can achieve this feat in four minutes with no human involvement. AMS visited Skoda’s new press line in April and can report that the “cascade” changeover, handling multiple processes simultaneously, is indeed a sight to behold. When the time comes to change the dies, an alarm sounds and the line stops; the walls of the press pull up and one set of dies comes out while another moves in from the opposite side. Meanwhile, carts for the tooling travel in and out, between the tracks for the dies. The windows slide back down and the line starts up again, smoothly and easily. 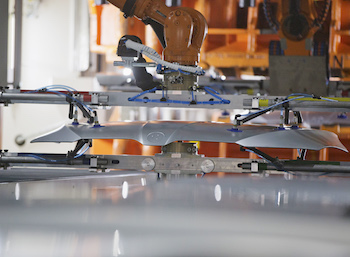 PXL II has the same fundamental technology as PXL I – also supplied by Schuler and installed in the M12E press shop – in that it is servo-mechanical, but this line will be able to produce aluminium parts with the addition of new material handling equipment based on vacuum rather than the magnetism used for steel. It has been improved by several small adaptations devised by Skoda in Mladá Boleslav to make it even more efficient; indeed, one of the reasons why the plant received this large investment was because it already had two years of PXL experience from the first installation.

According to Karaffa, “One of the main enhancements is a new control system allowing for faster line routing. Thanks to this system, the line is able to perform up to 18 strokes per minute, while PXL I could ‘only’ do 17 strokes.” Another improvement he mentions is the optimisation of CBF robots “so they do not stop during compression but only slow down”. This will have a positive impact on their lifecycle.

There are now other PXL lines in the VW Group’s European network – premium maker Audi has the technology at its plants in Germany (Hanover), Hungary (Győr) and Slovakia (Bratislava) – but PXL I at Mladá Boleslav was the first and PXL II is the newest.

The impact of this PXL technology at Mladá Boleslav has been significant, releasing a bottleneck in the press operation that was limiting capacity not only at this one plant but in the wider production network. Two years after its first servo-mechanical line was installed, Skoda was able to produce 1m vehicles within 12 months for the first time. In the last 18 months, the installation of the latest PXL line – together with the alleviation of a paintshop bottleneck – has boosted Skoda’s daily output in the Czech Republic from 2,900 to 3,300 vehicles per day, raising the annual capacity by 90,000 vehicles per year.

Other big landmarks achieved in the past two years include Mladá Boleslav reaching a cumulative total of 12m vehicles in 2015 and Skoda hitting 18m in 2016 – both years in which the vehicle-maker maintained its 1m-unit output. But, says Karaffa, “Skoda is not resting on its laurels; we want to progress in aluminium. We are just waiting for the right decision at the right moment.” 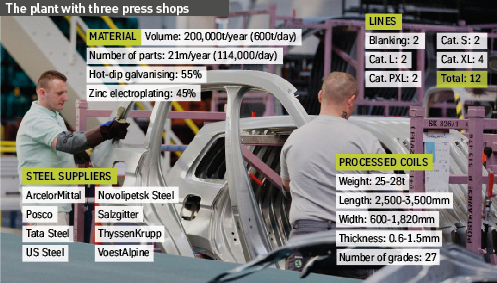 The plant in the north of the Czech Republic started car production in 1905 and is still Skoda's main manufacturing site, though it has another domestic vehicle factory at Kvasiny.