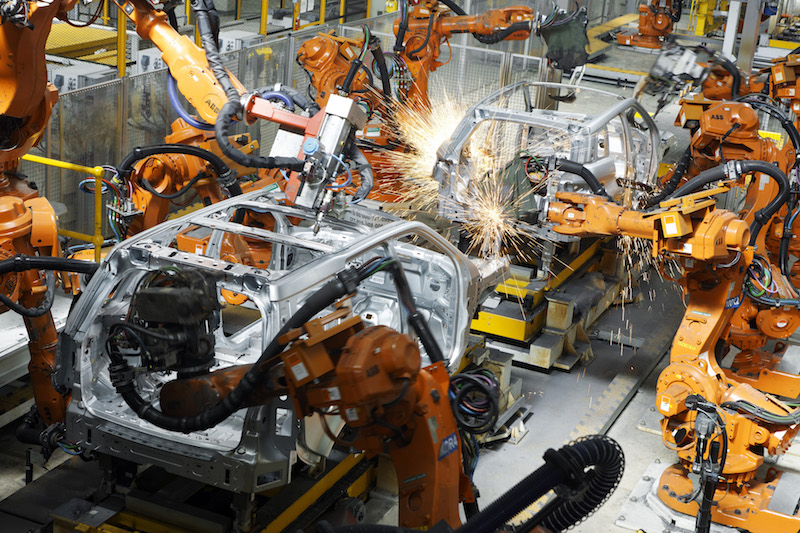 Not long ago, JLR was facing the possibility of a factory closure amidst declining sales and a recession. Fortunately, the Evoque model had already been approved for production, and when this vehicle launched it was an immediate and resounding success. Having been planned as a model that would hit 50,000-60,000 units annually at its peak, in some years the Evoque has actually been produced at almost twice JLR’s initial projections. The car that saved a factory is now in its second iteration, with full production taking place not only in the UK but China, plus completely knocked down (CKD) assembly in Brazil and India.

This success gave JLR the confidence to extend the Evoque into cabrio format, its first four-seater, full-size SUV cabrio. The model has also provided the underpinnings for the Discovery Sport and the same platform is now being used to produce a second Jaguar SUV, the E-PACE. This vehicle will start production during Q4 2017 at contract manufacturer Magna Steyr in Austria and also at JLR’s joint venture with Chery in China.

The Evoque gained JLR both time and money, much of which supported the design and development of the D7a/D7u aluminium-intensive platforms for the company’s larger SUVs and sedans: the Range Rover, Range Rover Sport, Ranger Rover Velar, Land Rover Discovery and the Jaguar F-PACE, plus the Jaguar XE and XF sedans. In addition, the Evoque provided the impetus for JLR to shift from being a vehicle-maker with UK production and CKD operations overseas to become a truly global player. Besides the plant in China, JLR is set to open a factory at Nitra, Slovakia, by the end of 2018, while the wholly owned CKD plant that opened at Itatiaia, Brazil, in June 2016, could ultimately become a full manufacturing facility. JLR also uses a Tata-owned site at Pune, India, for CKD production aimed at the local market.

In a move designed to prevent uninvited bids for JLR, the Tata Group has increased its own stake in Tata Motors, the quoted company that owns JLR; in September, it purchased an additional 1.7%, taking its holding to 36.4%. Under Indian law, the Tata Group can increase its stake in Tata Motors by 5% in each financial year without triggering an automatic 100% takeover offer, and additional share purchases in the current financial year seem likely.

Changes and challenges in the UKReflecting its position as the largest vehicle company in the UK, JLR’s opinions on national industrial policy carry weight, especially in the febrile Brexit environment currently enveloping the country. Recently, its CEO, Ralf Speth, has been outspoken about the need for the UK to do more to encourage investment in electric vehicles (EVs) in the UK. JLR seems to want to invest in building both EVs and electric powertrains in the country, but appears disappointed with what the government has done so far to support developments in this area. A particular concern is the provision of adequate power supplies, not just for customers to charge their vehicles, but also for facilities to produce batteries and electric powertrains as a whole.

Earlier this year, Speth said that JLR’s British vehicle plants actually have the potential to increase their output, despite regularly being described as at the limit of their capacity (over 300,000 units per year at Solihull, more than 200,000 at Halewood and 150,000 at Castle Bromwich). He specified that a rise of 20% would be “at the lower range” of possibility over the next three to four years if appropriate investment in these facilities takes place.

The three vehicle sites all have stamping operations, with Halewood’s being the largest. Halewood and Castle Bromwich can press both steel and aluminium panels, and supply all three factories, while Solihull has just one large transfer press which is mainly used for the biggest body side pressings for models made at Solihull and Castle Bromwich.

JLR is also looking to boost output through plant reconfiguration, improved logistics flows, better data usage and in-plant connectivity, including the implementation of 5G communications technology and other key aspects of Industry 4.0. In addition, Speth acknowledges that an SUV below Evoque and Discovery Sport is still possible; JLR has long been rumoured to be working on a project called D10, but this may be manufactured outside the UK, possibly in India or China. Yet he has also been reported as telling government and local politicians that a new JLR facility in Coventry, the company’s spiritual home, is also a distinct possibility.

The OEM already opened an engine plant at Wolverhampton in 2013, which started production with diesels then added petrol versions this year. As production has ramped up, JLR has reduced supplies of engines from Ford and PSA. In fact, the only engines still supplied by Ford are the petrol V6 and V8 units from Bridgend and some V6 diesels from Dagenham. JLR recently informed Ford that it will terminate its sourcing of engines from Bridgend in September 2020, rather than December as previously planned. These petrol engines will be replaced by in-line, six-cylinder units made at Wolverhampton. Diesel unit supply from Dagenham will continue after the Bridgend contract finishes.

One major challenge for JLR at present is the need to bring more suppliers to the UK in order to raise the local content of its vehicles. However, in one of the first and potentially worrying signs of the impact of Brexit, JLR admits that it is encountering difficulties in its attempts to do so. The OEM’s increasing production volumes are obviously attractive to suppliers but, with many other investment possibilities in Europe and further afield, and with limits on their investment funds, suppliers are currently very wary of investing in the UK when so much is uncertain regarding tariffs, customs duties, market access, employment conditions and residency rights for workers. 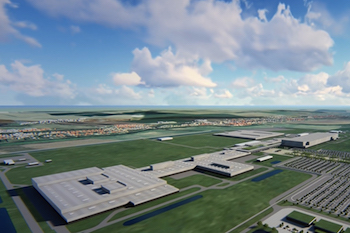 JLR's Nitra plant will be able to make aluminium-bodied vehicles

Slovakia: A £1bn plant for aluminium modelsJLR is building a new facility at Nitra in Slovakia, investing at least £1 billion, and recruiting a workforce of around 2,800 people. The plant will make vehicles on the D7a aluminium-intensive platform and full manufacturing is due to start in late 2018, when some of the Discovery production will be transferred from the UK; ultimately, it seems likely that all of it will go to Slovakia. In addition, it is widely assumed that Nitra will produce the replacement for the Defender in a variety of body styles: pick-up, three-door and five-door versions are believed to be planned, with the vehicle made in ‘Utility’ and ‘Fun’ or ‘Lifestyle’ specifications.

A production capacity of 150,000 vehicles a year is being installed, but the site could make double that with additional investment; press reports over the summer also suggested that JLR was evaluating the feasibility of making both EVs and electric powertrains at Nitra. The company is already planning to increase its logistics facility there from 64,000 sq.m to 75,000 sq.m. Given that the I-PACE EV will be made nearby in Austria, using that same supply chain for other EVs at Nitra would be logical. The Nitra investment has received £108m in grants from the Slovakian government, and a European Commission investigation is underway to check that everything is in line with rules on state aid.

Austria: Contract manufacturing at Magna SteyrJLR is using the contract manufacturing capacity at Magna Steyr in Austria to produce the E-PACE SUV from late 2017 and the I-PACE EV from early 2018. The E-PACE, a compact model smaller than the highly successful F-PACE, is expected to be the Jaguar brand’s bestselling model. Total production, which will be shared between Austria and China, is expected to exceed 100,000 units a year.

China: Expanding production with CheryIn China, JLR operates a 50:50 plant with Chery, which opened in October 2014. This is the only full manufacturing site within JLR that makes both aluminium- and steel-bodied vehicles: the steel-based Range Rover Evoque and Discovery Sport, plus the China-only, long wheelbase version of the aluminium-intensive Jaguar XF. Chery-JLR installed an aluminium laser-welding facility specifically for the latter model. The plant has an annual capacity of 130,000 units, which is due to rise in the next couple of years. Reports in November 2016 said that the JV was intending to increase the capacity by around 50%, or 70,000 units a year, raising employment at the plant by 2,000 to 6,000 people.

Significantly, the Chinese site has also recently added its own engine plant, JLR’s first such facility outside the UK. This will alleviate the pressure on its Wolverhampton factory and save significantly on logistics and shipping costs. To begin with, the plant will make only the 2.0-litre, four-cylinder Ingenium petrol engine, but other engine sizes and configurations, including hybrids, are likely to be added in the near future. 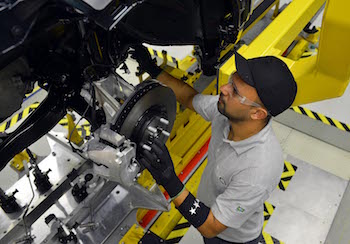 The Itatiaia facility, Brazil, currently operates only one shift

India: Potential for growth with TataAt a Tata-owned facility in Pune, JLR produces the following models using kits shipped from the UK: the Evoque and Discovery Sport, plus three Jaguar models, the XE, XF and XJ. In the long term, JLR could select India as one of its production locations for the rumoured small SUV range below the Evoque and Discovery Sport. There have also been suggestions that Tata could use the old Freelander platform to make an SUV for the Indian market.

Brazil: First exploration in the AmericasHere, JLR’s investment is rather more modest compared with what it has spent in Slovakia and China; £240m will be spent by 2020. The facility at Itatiaia, Rio de Janeiro, will assemble Discovery Sports and Evoques using fully painted body shells and part kits shipped from the UK. Initially, the local content will be between 20% and 30% but JLR intends to increase this as volumes rise. The plant has a capacity of 24,000 units per year based on three shifts, though it has been operating just one shift this year.